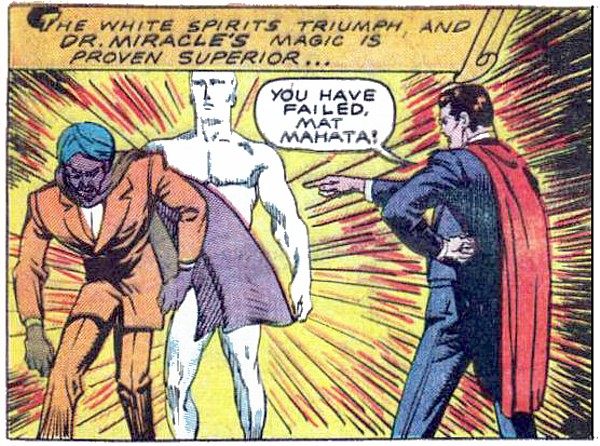 Alex Blum, born in 1889, was nearly 50 when he began his comic book career in the late 1930s. Blum was a portrait painter during the Great Depression. That career “evaporated,” as described in his Wikipedia biography. To struggling artists of that time the comic book business must’ve looked pretty good.  Good even with low page rates and oftentimes sweatshop conditions: rooms full of artists and drawing boards cranking out reams of pages for a burgeoning industry. Blum was a true journeyman artist. He lasted in comics for several years. I most closely associate him with Classics Illustrated, where I first saw his name.

(Blum was also the father of Eisner-Iger writer Toni Blum, with whom Eisner had a relationship at one time as recounted in fictional form in The Dreamery.)

This story, drawn by Blum, is yet another magician character, Dr. Miracle. Every anthology comic had to have at least one imitation Mandrake, wand-waving or finger-wiggling, casting magic spells against evil. Dr. Miracle can even conjure up the “White Forces of Good,” which sounds racist, and in context of the teaser panel at the head of this post I believe it is.

The main reason I’m showing the story is because it has zombies. I like zombies, even in magic stories. From Champ Comics #23 (1942): 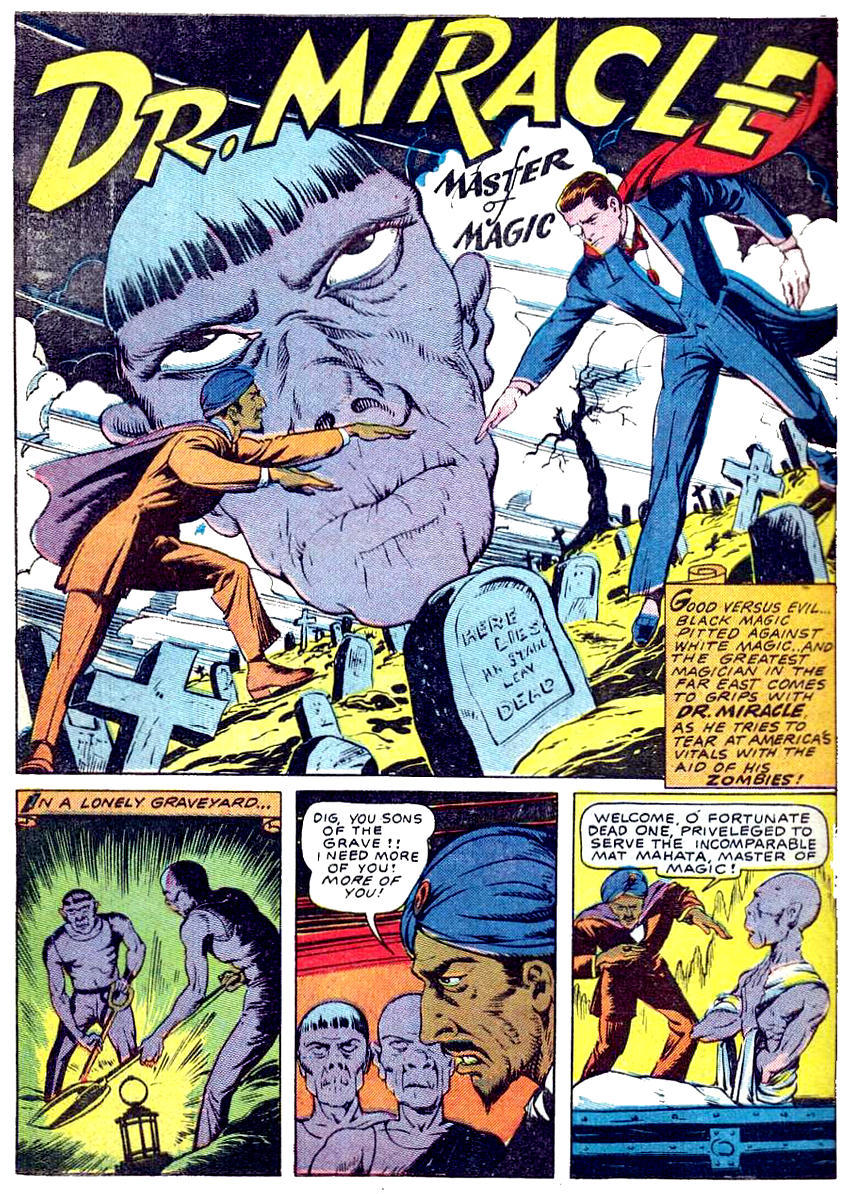 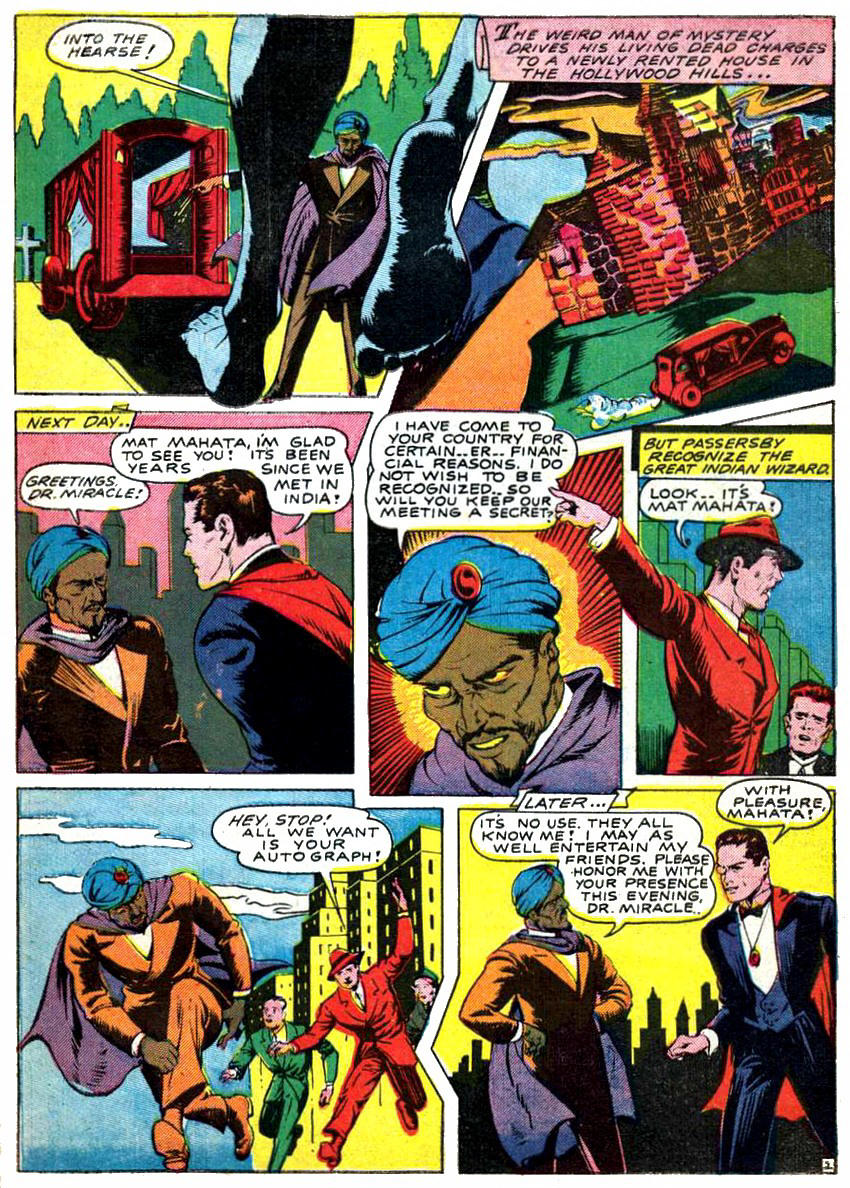 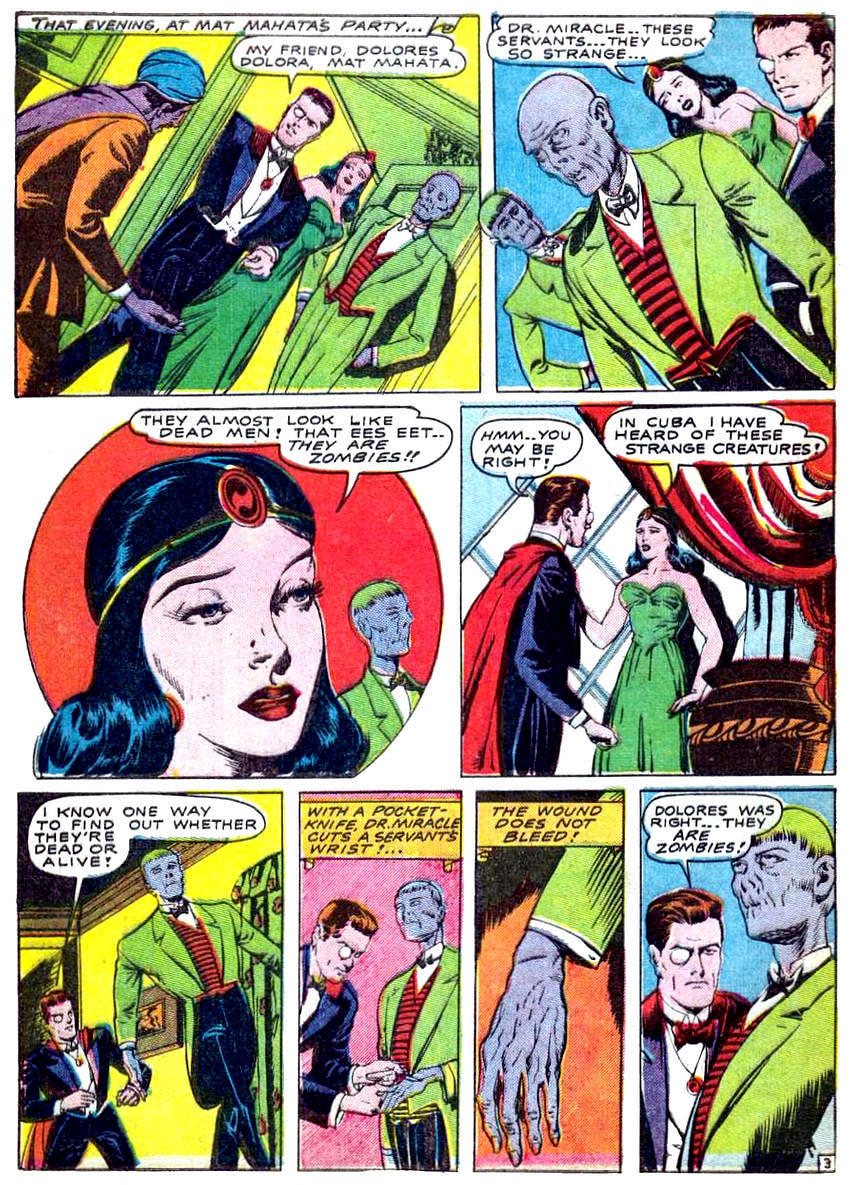 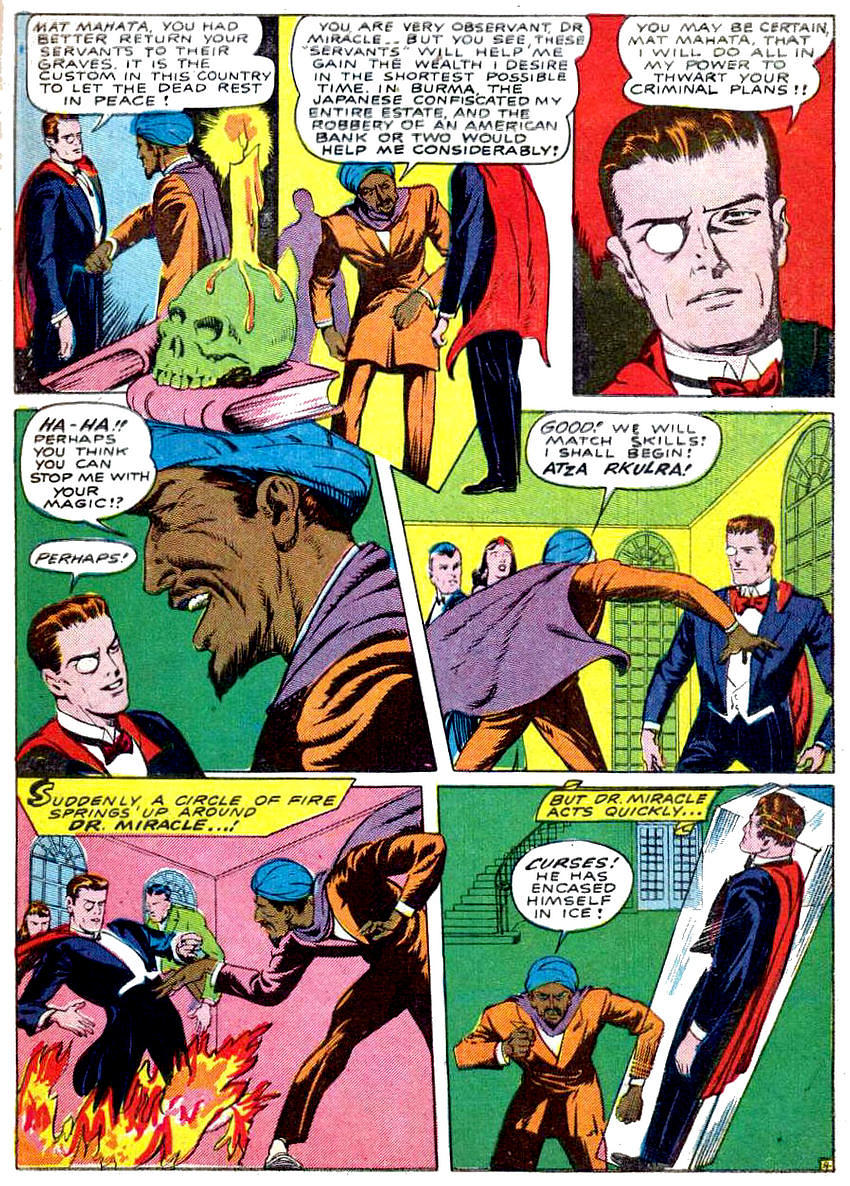 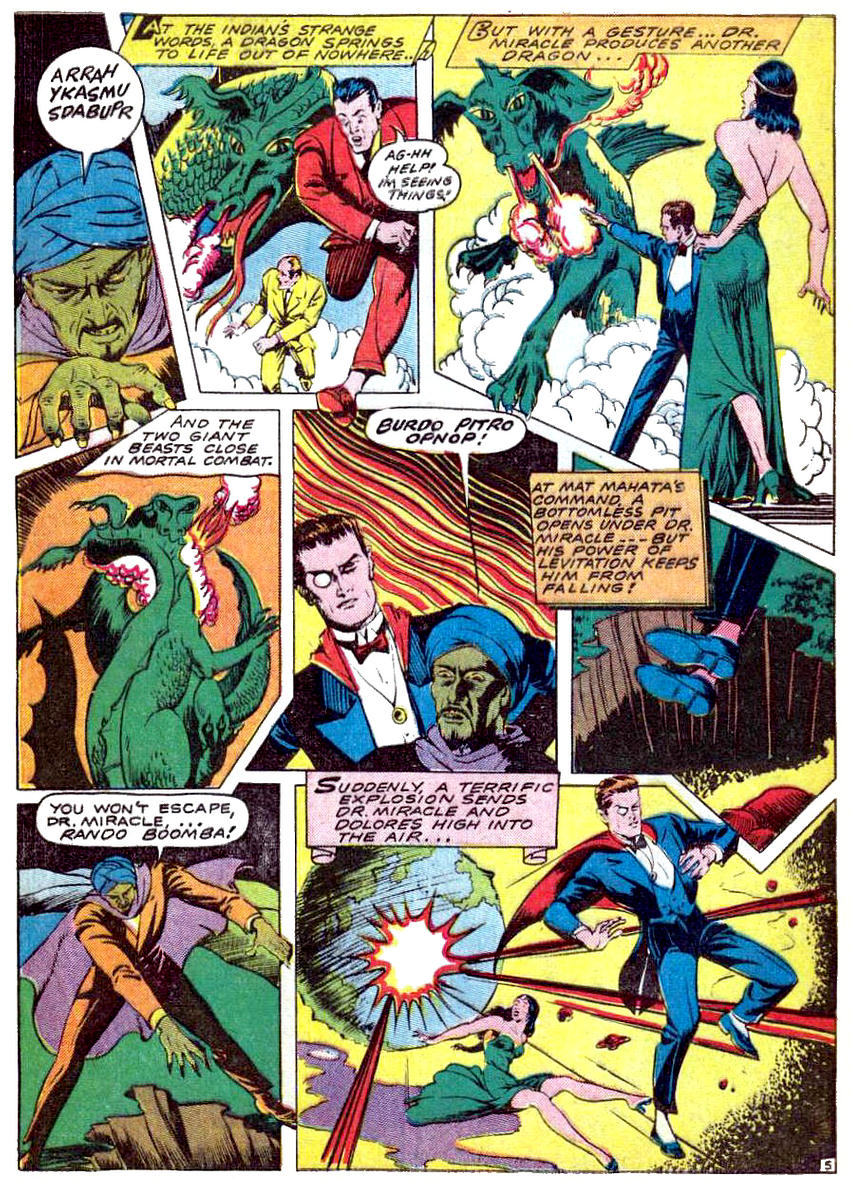 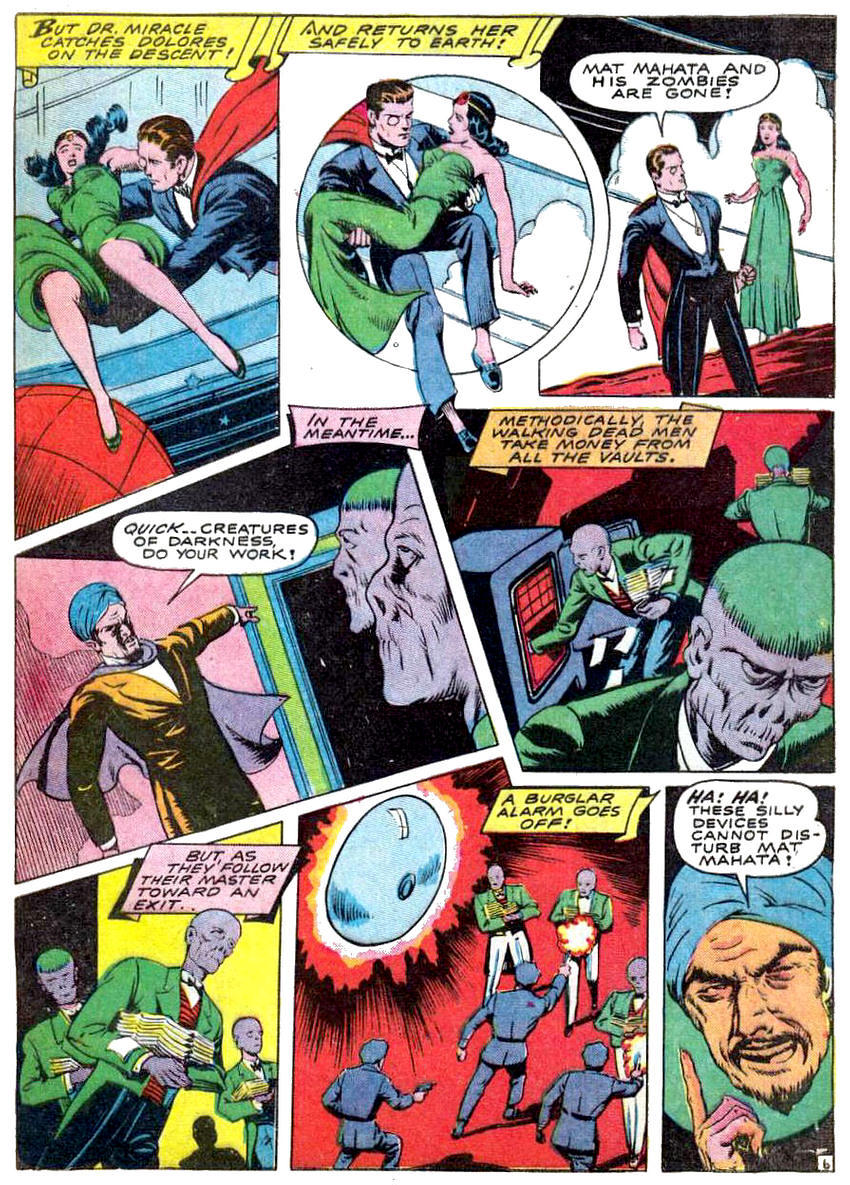 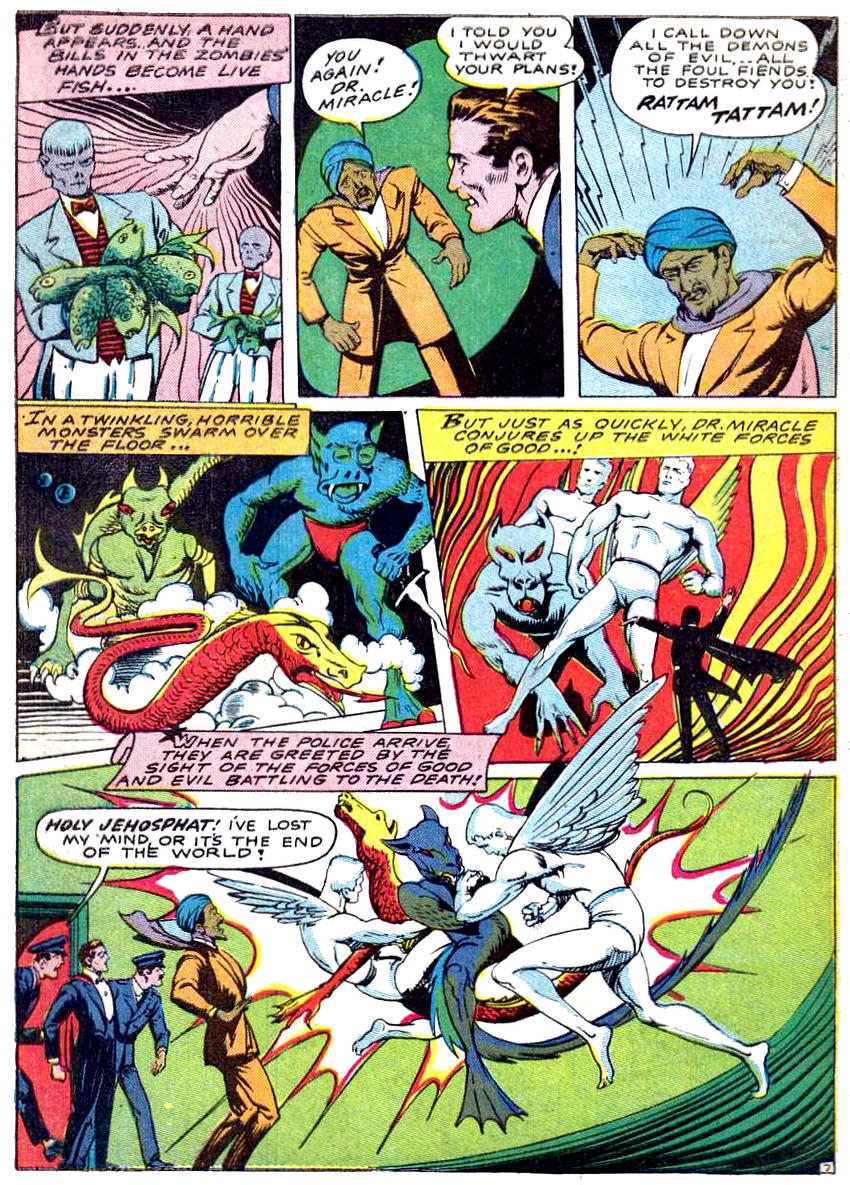 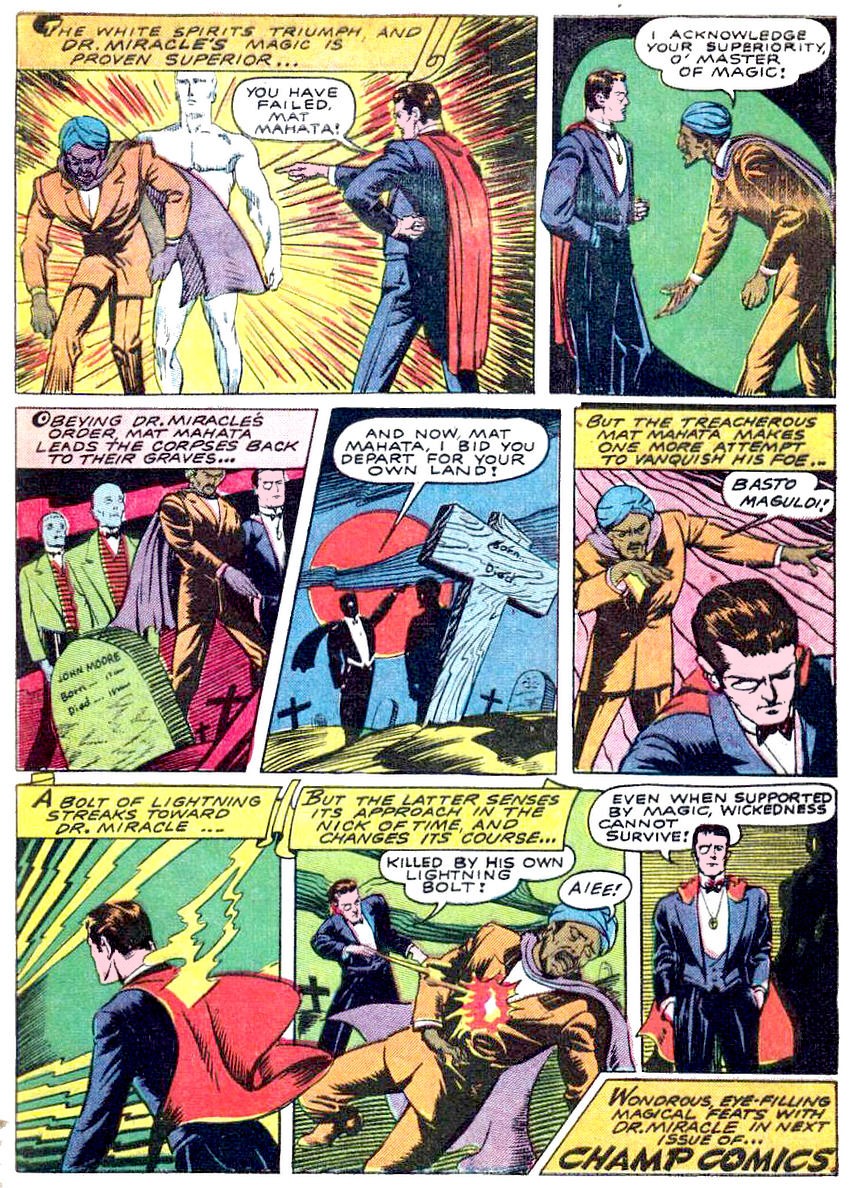 This story seems to run contrary to the tendency, during World War II, to present the victims of the Axis as good guys (even if the depiction were often condescending). And the mash-up of Indian and Caribbean cultures is quite something. Certainly these things conform to a theory that an element of racism informs this story.

It doesn't appear Mahata was out for anyone but himself. The fact that there was a war going on was immaterial. The 1936 film "Revolt of the Zombies" presented a Cambodian holy man who also knew how to make zombies. So it's not necessarily a tie-in to the Caribbean (though Dolores is).

I think the dichotomy between white magic and black magic goes way back past racism in the U. S. The Bible describes the second coming of Christ in white robes, etc. Thanks!

Darci, I agree that the white/black magic is pre-racism, but in the context in which the white spirit was shown in this story it strongly suggested it was racist. I also think that nowadays we tend to think more about it. Perhaps some people saw it that way when the story was published, perhaps not.

Darci, Revolt of the Zombies was yet another mash-up, rather than drawing on a genuine Cambodian tradition of zombies. The movie is just precedent, not exculpation.

Culturalism is, of course, not racism (however much the political left may confuse the two). But confusions about cultures whose members are predominantly of other races are often founded in racism, and tend in turn to reinforce racism.

Pappy, it's interesting how commentary here speaks to elements of racism, when my comments also speak to the elements of color in this story...more appropriately, the bright colors of the comic. For a 1942 comic, it is notable for it's clear and bright colors (nice scans) and high quality print job...so many comics of this period and even into the 60's suffer from poor reproduction and out of register colors, while this story is exemplary. A nice choice to post for that reason alone.