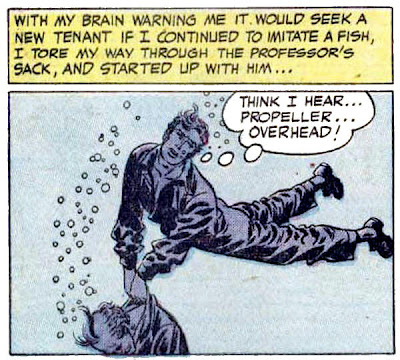 DC's Danger Trail lasted five issues, from #1, dated Jul-Aug 1950 to #5, Mar-Apr 1951. I have no idea why it had such a short life. It had good covers and interior art, and interesting characters in action-filled stories of intrigue. The artists, among them Carmine Infantino and Alex Toth, were some of DC's best. I don't know if sales were bad, or because editor Julius Schwartz was debuting a new title, Strange Adventures, with a first issue dated Aug-Sep 1950. In the wings was a sister publication, Mystery In Space, the first issue dated Apr-May 1951, which coincided with the last issue of Danger Trail. Science fiction was Schwartz's entry into magazine editing, after all. Read more about editor Julius Schwartz.

King Faraday, starring in this Robert Kanigher-scripted story from Danger Trail #2 (1950), had an even shorter career than the comic book. He appeared in the first four issues. He was brought back years later by DC in one of their revisionist versions of old and obscure characters, but that’s outside the scope of this blog. The story I'm showing here is a little caption heavy, but well drawn by Infantino and Frank Giacoia. 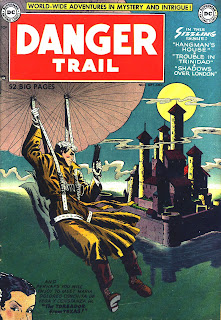 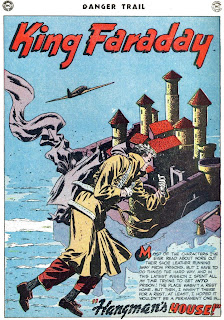 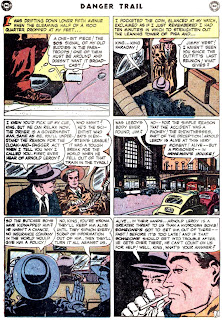 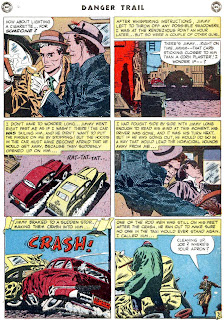 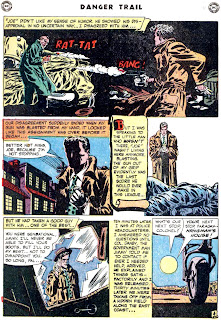 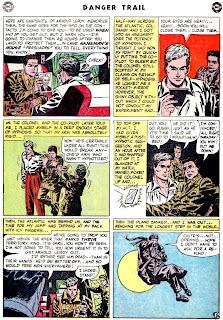 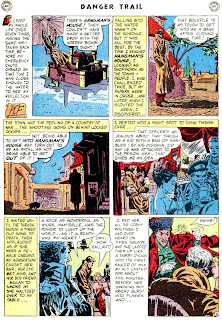 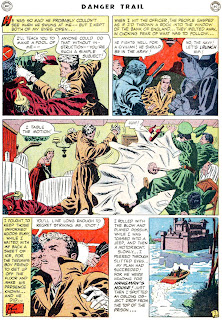 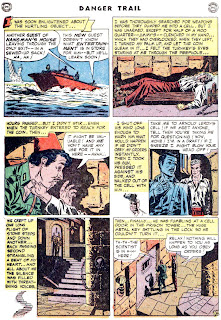 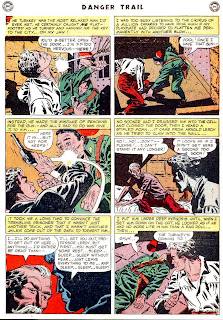 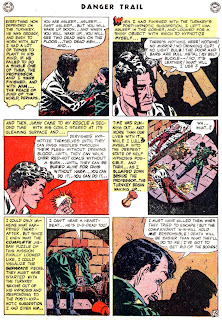 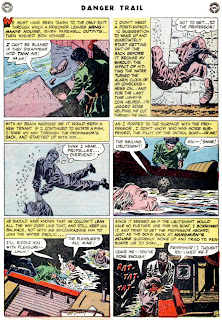 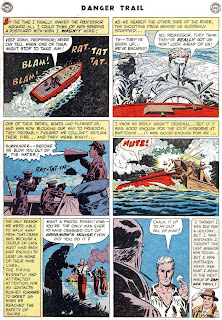 I can tell you one reason it might not have lasted -- it breaks the cardinal rule of comics: show, don't tell. It spends more time showing then telling. Half the page is text!

Being a WWII buff, it's kind of interesting to know the Siege of Bastogne and it's famous rejoinder was still talked about in 1950.

Brian, you've also described EC Comics and their overwritten captions. (I still like EC, but I don't read every word on the page.)

I have a feeling Danger Trail might have been trying to tap into a more mature audience, an audience which also read real books. Voice over narration in movies drives me crazy, as do comic book captions that are describing the action at which we are already looking.

Bastogne and the "Nuts!" response to the Germans call for the surrounded Americans to surrender was still being talked of when I was growing up in the '60s. I think that the word "Nuts!" may have been too obscure (the Germans apparently weren't sure what it meant, not being into American colloquialisms). I'll bet if it happened today the note might have the infamous F-bomb, which along with "OK" is the best known Anglo-Saxon word of all. The message would be much more easily understood.

Not to argue with our gracious host, but while overwritten at times, EC added description. Most of the text could be eliminated (or shortened) without adversely effecting the stories. This comic here is a wall of words that describes the action!

Perhaps if the story had more pages allotted to it, it would have been less verbose. King Faraday (yeah, DC, I see what you did there, king for a day, I get it) was no doubt inspired by the two-fisted radio and pulp adventurers then common, and given to long introspective narration.

I heard that Gen. McAuliffe actually said something much more pithy, but told reporters he said "Nuts" because that was safer to print.

rnigma, Long ago, probably sometime in the '70s, I saw a clip of a filmed interview with a German officer who was there when that message arrived. The American interviewer asked him, through a translator, what they thought when they saw the response, and he said it puzzled them.

The whole incident makes a great story, though.

migma: McAuliffe didn't swear! Strange, I know, but his aides said that was par for the course. Pretty much everybody there backs up this story.

Yup, the German generals were confused. The translator told them that it meant "go to hell", that they understood.

Brian, as a former draftee GI who worked in headquarters with many officers I can attest to the fact that officers were trained to be "gentlemen" and "gentlemen did not swear." They left that to us enlisted types who made up for their lack of swearing by raising the roof with curses. As a matter of fact, I never heard so much cursing until I worked for 30 years in high schools, where the kids made our GI profanity sound tame!