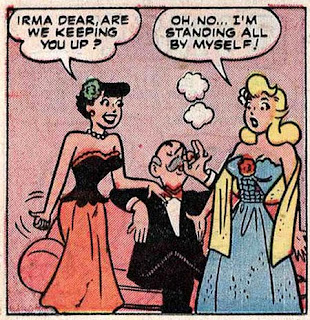 
Dan DeCarlo certainly could draw pretty girls. Over the period of several decades in the comic book business cute young women were his stock in trade. He made it look easy, this uncluttered cartoony style of his.

In the 1950s he teamed up with Stan Lee to do a comic book version of the radio/TV comedy hit, My Friend Irma. How funny it is depends on your tolerance for this style of humor. Irma begs the question: how dumb is a dumb blonde? Sometimes I skip the dumb jokes and just look at the cute girls. This story, and the single pagers that follow, are from My Friend Irma #12, from 1951.

I have posted some other My Friend Irma material by DeCarlo in Pappy's #138 and Pappy's #289. 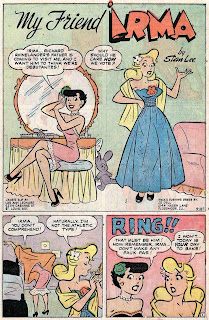 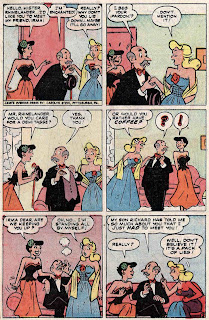 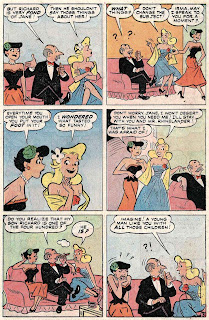 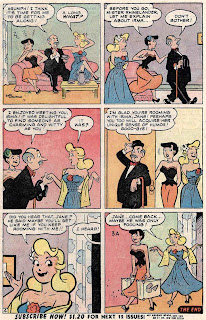 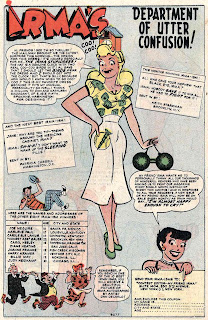 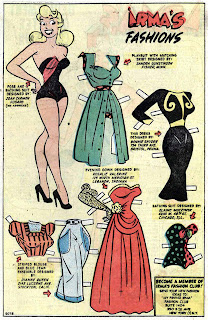 None betta than Jetta! 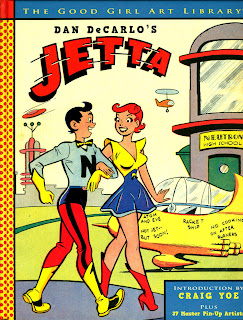 Craig Yoe has come out with yet another fantastic book, this time collecting the three obscure issues of Jetta in his deluxe Dan DeCarlo's Jetta. Jetta, this time a smart redhead rather than a dumb blonde, is a cute and perky teenager in a comical vision of the future..

Except for the futuristic accoutrements, Jetta's world in high school is like the 1952 world, when she was drawn. Boys still ask girls on dates, they still take girls to the drive-in, only the drive-in is in the sky, and the jalopies the boys drive are rocket ships. 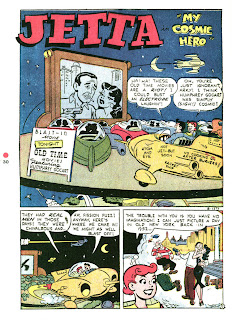 The dialogue is loaded with what passes for future teenspeak. Jetta is a "space pigeon" to her boyfriend; another guy is a "stratojerk" to Jetta. Jetta tells her boyfriend, Arky, he's "cooking with super-atomic radiation!" You get the idea.

In the book the question is asked, did Jetta have something to do with the later Hanna-Barbera cartoon, The Jetsons? It's tempting to think so. Perhaps some of the designers of The Jetsons might have seen Jetta, but it's just as likely that The Jetsons was a logical and comical extension of that "future world" posited during the 1940s and '50s, when the 21st Century seemed so far away, and the air over cities would be full of personal commuter helicopters and flying cars, and we'd all be wearing anti-gravity belts.

Dan DeCarlo's artwork is perfect for the subject material, and Jetta herself is as cute as any of his pretty girl creations. Several current comic artists and cartoonists contributed their versions of Jetta to Yoe's book, and as skillful as many of these artists are, my attention is on DeCarlo's original material.

Dan DeCarlo's Jetta was a bright little shining moment in comic book history, and we all need to thank Craig Yoe for making it available to us. Highly recommended.

You can order from Amazon.com or Bud Plant's Art Books.

if you like Dan Decarlo's style of drawing young maidens, you should check out "Cherry Poptart" the 80s and 90s Archie comics parody....its rather porngraphic, but hilarious!

Mmmmmmmmmmm...Dandy Dan...he gave us our vision of the female ideal.

Irma's skirt has a screw with a baseball on it - in other words "screw-ball."

One correction: That Betty and Veronica cover is by Harry Lucey, not DeCarlo.

What nib did Dan Decarlo use?

Odd how dumb Stan Lee's jokes are, considering the one-liners he later put in the mouths of Spiderman and Ben Grimm could be quite humorous. The only way to explain the difference, I guess, is that the jokes in the superhero books were basically comic relief; Stan needed the drama (or melodrama) to play off of.

Maybe if Jack Kirby had drawn My Friend Irma...

One of the beauties of the Internet is that I can go back in and fix my mistakes.

Thanks for pointing out what needed correcting.

Pappy, I have long loved your understated prose style - and this is the "understatedness!"

The DeCarlo Jetta volume is one of the easter eggs I'll be hunting at Heroes Con in two weeks.

DeCarlo acolyte, Dan Parent is gonna be a guest there too, and I'm hoping to score a nice sketch from him.