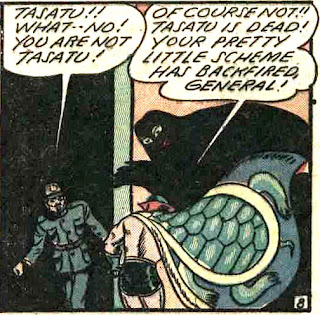 
In order to show you this Green Turtle story from Blazing Comics #3, I had to go back into my own archives to read what I said in 2007 when I showed you the Turtle story from Blazing #1. You can read Pappy's #221 yourself. Or I can tell you that Green Turtle was a hero by a Chinese-American artist, Chu Hing, who wanted Green Turtle to be Chinese. The publishers felt differently, so Chu hid the character's face from us, instead showing us a weird shadow with eyes. That bit of symbolism is odd enough to be attention-getting, even if the story seems to be routine World War II fare.

Blazing Comics was short-lived, and thus died the Green Turtle's comic career. He's an interesting character if only for the circumstances surrounding his creation. I don't know if artist Chu Hing continued on in comic books or not. I wonder how many Asian artists worked in the industry in its early days. I can think of prolific letterer Ben Oda; There was artist Bob Fujitani, who was half Japanese. The Filipino artists made their marks in the 1970s. In recent years there have been many more opportunities for artists, but at one time, with rare exceptions, comic books were a white boys' club. 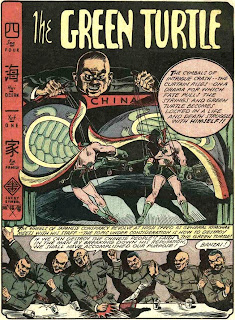 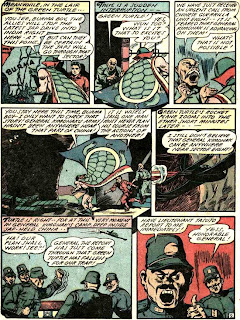 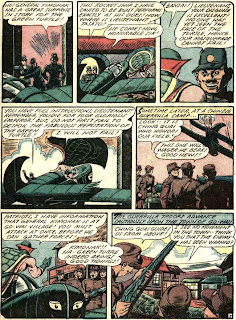 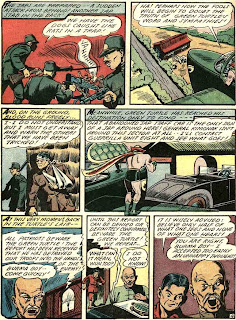 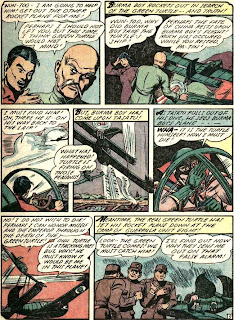 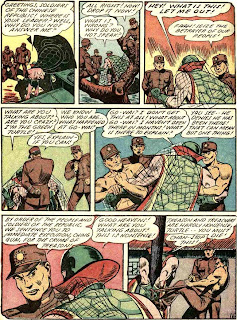 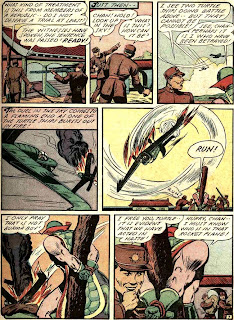 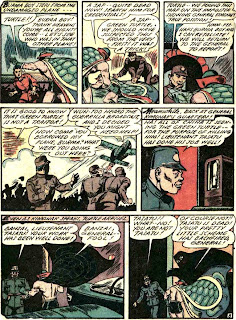 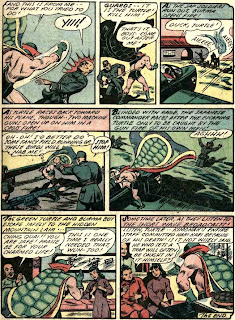 Pappy: Forgive me for contacting you on your blog, but I was not able to locate a private email for you in your blogger profile.

I have been a fan of your blog for some time. I recently started a comics blog: The Big Blog of Kids' Comics http://www.bigblogcomics.com/

I have taken the liberty of linking Pappy's Golden Age on my blog. If you have the time to check out my blog and find it link-worthy, if you could link it on your blog I would appreciate it, or maybe even become a “follower.”

Feel free to delete this after reading, as I'm sure you don't appreciate self-promotion in your comments section -- Mykal

I believe Fred Kida of Airboy fame was Asian.

Mykal, your blog is very handsome. I enjoyed your story choices as well as your fine scans. I hope my linking to your site will help.

Darkmark, I appreciate the info on Kida. It stirs some memory cells somewhere, so thanks for reminding me.

Pappy: Thanks very much. It's appreciated. - Mykal

I'm familiar with this character, but I haven't read this story before.

Interesting back story on why the Turtle isn't more prominent in the tale and it's too bad that the publisher didn't just allow him to be drawn as an asian hero.

Some comic book historians (professional and otherwise) think GT was meant to be purely Caucasian from the beginning. Citing as their evidence the fact that he asked Burma Boy, when they first met, if the latter spoke English. But that, alone, is no guarantor that the Green Turtle was a white guy. He could have been a half-white Chinese-American (from either California or Hawaii) who was raised in a household where English was the one-and-only language allowed. Unfortunately, there is ample real-world precedent for such a scenario.*

*Namely, all the 19th century Native American children who were forcibly shipped off to East Coast boarding school...and harshly abused by the faculty (as "punishment") whenever they reverted to their tribal languages.

Turtles and Dogs do not make the best super-hero names. Still, this must have been the only non-white super-hero around in those days.