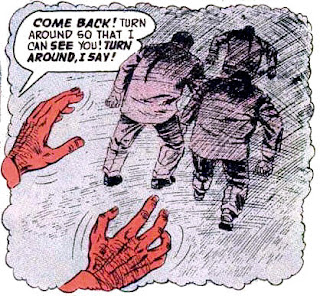 I have gotten so caught up in the comics from the early time in which there was no Comics Code that I have forgotten to mention the Code ended in 2011. The original Comics Code was ostensibly aimed at children, but the readers outgrew it.

My posting today is of a comic book that took a pre-Code story, then turned it into a Code story by changing a couple of panels. The Code version is from ACG’s Unknown Worlds #56 (1967), and the earlier, un-Coded story is from Forbidden Worlds #32 (1954). The story title was changed from its original, “The Secret of Cynthia Crone!”

You can see that the 1954 version of the original panel (left) shows a bit more than the Code-censored panel.

The censored panel from the reprint (right) shows nothing but sound effects. In the original the bad guy is getting dipped, head first, into a witch's cauldron. 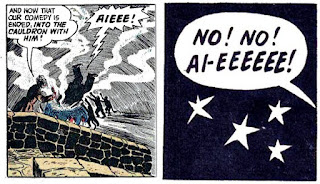 The publisher didn’t last long after this; just one more issue of Unknown Worlds after this issue. The whole ACG line went out of business that year.

Artwork for the story is by Kenneth Landau. 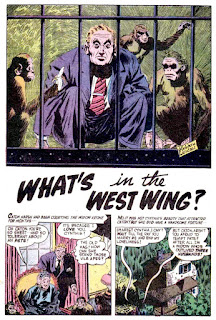 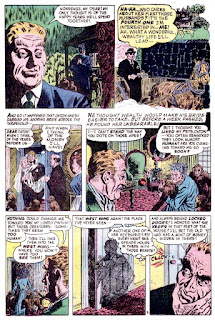 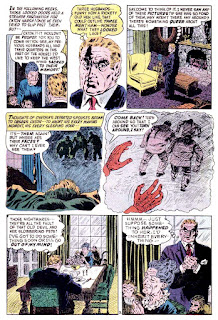 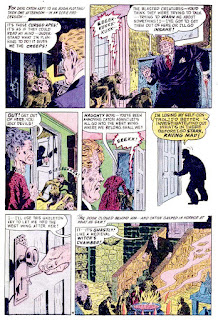 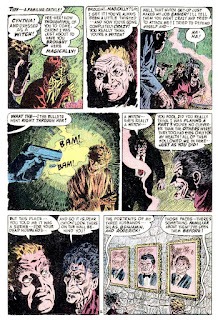 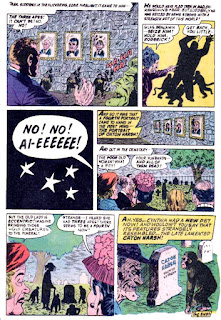 In Nº 691, you offered us a pre-code version and a more thoroughly reworked post-code version of a different story illustrated by Landau.

In the original, serialized version of H. Rider Haggard's She, a character was killed by having a heated metal pot placed over his head. Before the novel was published as a volume, it was decided that the scene were too terrible, and so the character was accidentally slain by a bullet, passing through the body of one of those trying to kill him with that heated pot.

But Caton Harsh seems to have been not so much killed as transformed. In the post-code world, characters could be transformed by bathing in activated chemicals — that, after all, was part of what happened to Barry Allen. I imagine that ACG could have won a challenge with the CCA over that panel, but didn't want to fight about it; ACG may even have made a preëmptory change, and told themselves that it improved the story (fear of the unseen, and all that).

I note that exit lines for the paths of the bullets remain in the post-code panel. But they are largely swallowed-up by the radiant lines.

Is no one else going to bring up the slight resemblance to the last President in that opening splash?

Daniel, thanks for reminding me of Ken Landau's former pre and post censorship story.

His artwork in that story, especially the monsters, are as weirdly goofy and ugly as I had seen in a comic book from my era, when the Comics Code ruled supreme.

Wm, not a bad comparison, considering that when the story appeared on the stands that former president was 8 years old. Going in a few pages of the story I see some facial expressions that look familiar to me from the ex-president.