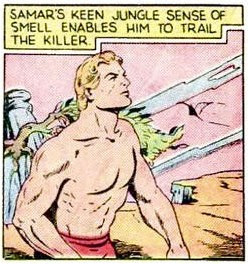 Besides sharing his name with an island in the Philippines, Samar is another white jungle guy. He appeared in Feature Comics from 1940 to 1942, and shared something with the much more successful character, the Phantom. They were both headquartered in India, which often looks more like Africa.

Nicholas Viscardi (who later went by Nick Cardy) and Ted Cain are credited with creating the character Samar. Viscardi/Cardy, born in 1920, was just a youngster when he began his comic book career. This story, which appeared in Feature Comics ##32 (1940), is not credited for a writer by the Grand Comics Database, but gives Maurice Gutwirth credit for the artwork. 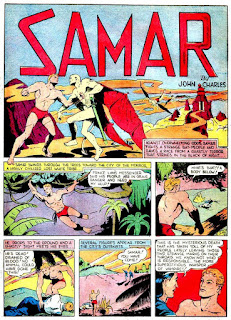 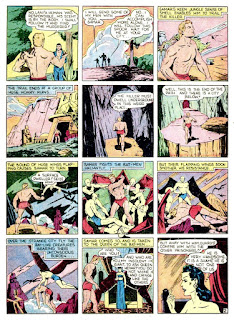 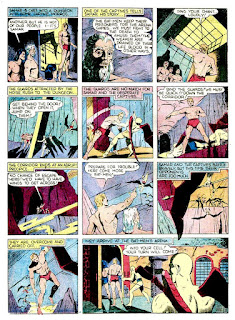 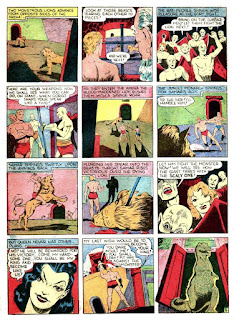 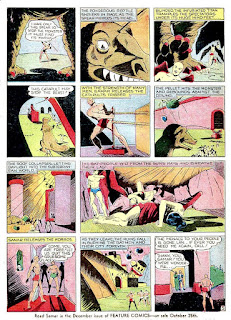 A sense of smell that allowed such tracking would seem to me a curse. I don't care for much of what I smell as it is! But I also question Samar's competence in interpretting odors. Just how does the smell of a bat-man who drains his victims of blood differ from that of a vampire? and how is it more like that of an ordinary man than is that of a vampire?

I've not knowingly seen as primitive a story as this from Feature Comics, which I'm used to associating with much more polished work. But I always greatly appreciate seeing these early golden-age stories, especially when the artists, though struggling to find their ways, were headed in the right general direction.

What does Queen Nevar mean? Samar will become a slave-owner? Or something more? Do some humans become bat-people?
Thanks!

Egad, Darci...best I can do in answering your questions is "I dunno." I'd prefer not to go back and re-read "Samar." Thanks anyway for your note.