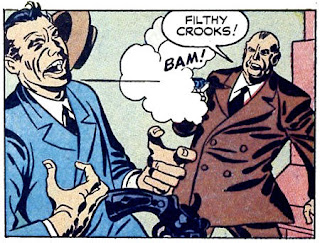 Jack Kirby did a short history of the infamous Fleagle Gang, bank robbers. They robbed a bank in Lamar, Colorado, in 1928, and it's where their life of crime began to catch up with them. The story hits the high notes of the bank robbery and aftermath and is fairly accurate judging by other sources I have read of the Fleagles’ history. A gang member was shot in the jaw by the bank president as the bank was being robbed. Later, a doctor was called to treat the wounded man. Apparently the treacherous Fleagles' solution for not having health insurance was to kill the doctor when his usefulness was over.

Jack Kirby is credited with the artwork, but no writer is given. The 1947 issue of Hillman Publishing’s Clue Comics (Volume 2, Number 3, whole number 15), was the last issue. 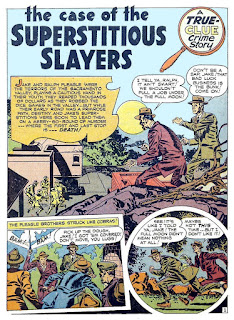 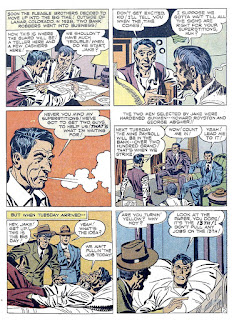 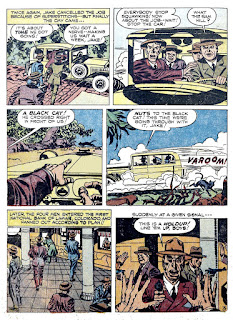 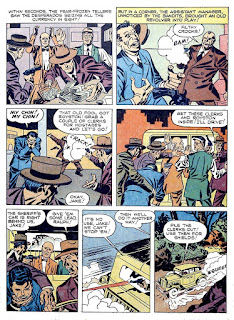 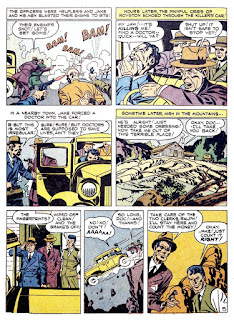 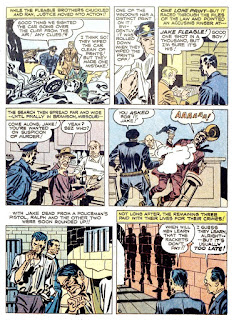 I have been re-reading Greg Theakston’s Complete Jack Kirby books. In a volume on Kirby’s output in June-August 1947, several crime comics stories by Kirby and Simon are shown. A point Theakston made about Hillman Publishing, where Kirby/Simon art was published for a time after World War II, was that in 1940 a newsdealer who carried a Hillman black and white magazine, Headquarters Detective, was raided by police and all copies of the magazine confiscated. There was a law in several cities, including New York, that publications devoted exclusively to crime were considered obscene. The newsdealer went to jail, and it took a Supreme Court ruling in 1947 that there was uniform freedom of the press, even for publications that were devoted to lurid crime stories.

Theakston made a claim I have never before heard: “By 1947, one of every three periodicals sold in the United States was a comic book. This is an important statistic to consider when examining the war against comics.” Theakston then added, “Who stood to benefit by the condemnation of the comic art form? Using ‘follow the money’ logic we can dismiss the actions of mothers and fathers, teachers and librarians. The real enemies of the comics were the other media. Comics had cut deeply into the sales of movies, magazines and newspapers.”

Theakston did not use any footnotes to guide us to specific evidence his claim was true. I know comic books were big sellers, but were they one third of all American periodical sales? That I don’t know.

I'd never heard of the Fleagle boys. Do you suppose their name might have inspired the Beagle Boys? Just wondering.

As you noted more than six years ago, Harvey Kurtzman later dubbed a group of artists including Frank Frazetta, Al Williamson, Roy Krenkel, Angelo Torres, and others as “the Fleagle Gang”. (The others in that gang ultimately included George Woodbridge, Angelo Torres, and Nick Meglin.) I'm hoping that they didn't murder any doctors.

As to Dr William Wesley Wineinger, murdered by the earlier Fleagle Gang, he was found under his car, bound and shot in the back of his head.

At the bank, the Gang had killed both the bank president and his son. During their escape the Gang actually released one of their two hostages, but indeed later murdered the other. Ralph Fleagle was the first to be apprehended, and confessed in order to avoid the death penalty. Royston and Abshier were later apprehended, and also confessed. Jake Fleagle was shot while resisting arrest after these confessions; he had been found on a train, rather than in bar. He didn't die until the next day, and also confessed. The court ignored Ralph's apparent plea bargain, and he was hanged with Royston and with Abshier.

Angelo Torres is still at large.

Some really good action shots (ha) in this, but you could always depend on Kirby for that.

I wouldn't doubt comics were selling that much, the fact that the market could support over a hundred titles a week (heck, search for series in 1950 in grand comics database returns over 1500 results!) I could see other publishers having a cow over that.

Crime certainly doesn't pay when you're as incompetent as that gang.

Daniel, sadly those other Fleagles are all gone. The criminal Fleagles aren't missed, but the artist Fleagles sure are.

Brian, at some point (1952?) there were 400 titles on the stands at one time. So, maybe you and Theakston are correct. I would like to see some solid statistics, though.

Some comics were published by slick magazine companies. Saturday Evening Post published comics for a time. In Seduction of the Innocent Dr Wertham tells of a conversation with a proprietor of a newsstand, who told him that if he didn't carry that slick publisher's comic books they wouldn't give him any of their best-selling magazines to sell. Wertham was smart enough not to name the SatEve Post as being the extortionist.

A former comic book publisher was asked the low sales in the mid-to-late fifties if the Comics Code killed comics he said, "It was television killed the comics."