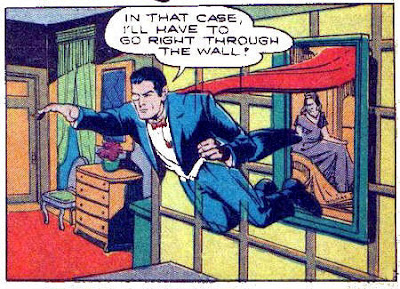 Dr Miracle is described by the folks at Public Domain Super Heroes:

“. . . the Master of Magic (white magic) who used his “miraculous” powers to fight crime and the Axis powers during World War II. His magic powers included telekinesis, the ability to levitate and fly at tremendous speeds, the ability to elongate his own limbs, the ability to transform himself into a flying ball of fire, the ability to walk through solid walls and the ability to cast illusions, often used to disguise himself or others. He was pretty much given any ability as the plot required, but he was not omnipotent. Apparently, he could not stop bullets, so guns were a potential danger to him. He was not omniscient either, but he was a good detective. Also, he was powerless without the amulet that he wore around his neck. This amulet could neutralize the power of amulets of black magic.”

I like the part about “he was pretty much given any ability as the plot required.” On the one hand a character can be boring if he is always doing the same old stuff (Mandrake “gesturing hypnotically”), but on the other hand, a character who can come up with a power to meet every danger can be dull and give the reader that old so what else is new? attitude. In this story we get to see Dr Miracle wrap some criminals in a fiery ring, and my favorite, Dr Miracle floats through a wall like a ghost. (See the teaser panel above.) A cult leader is the villain, and he leaves some documents that prove he is not who he claims to be. Dr Miracle doesn’t need any special powers to catch someone who is dumb enough to leave damning evidence in plain sight. 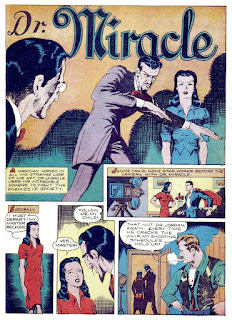 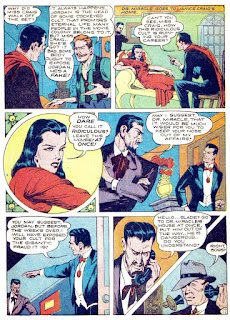 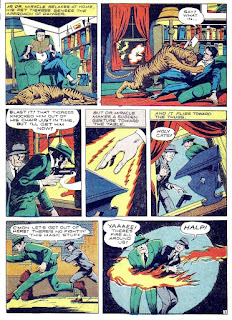 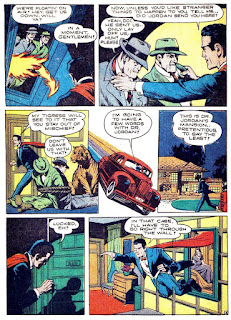 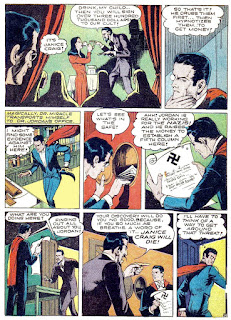 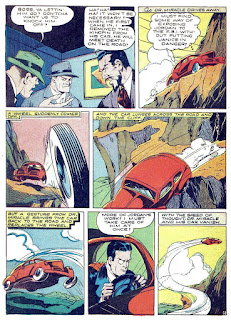 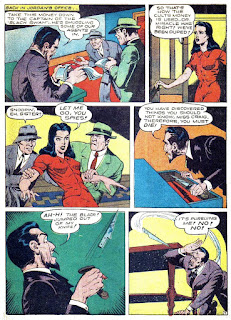 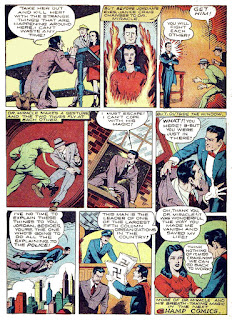 I really like the art in this story, which is more like earlier golden-age stuff than what I would have expected in 1942.

In its early days, the Nazis used both clockwise and counter-clockwise Hakenkreuze, but by 1942 they'd settled on the clockwise Hakenkreuz. Perhaps those incriminating documents were rather old.
(In the present age, there is much silliness in the West about the relative significance of each swastika in the East, with many Westerners falsely claiming that the people of the East and others only use the counter-clockwise sauvastika. The matter is complicated, but the bottom line is that we cannot demonize either variation of this glyph without demonizing an important symbol of innocent people.)

We don't hear or read much about Hollywood's fascination with cultish belief prior to the '60s; but it's pretty long-standing.

I can appreciate inventiveness, but I am amused by how often Warlock the Wizard used his power to throttle an opponent.

By the way, looking more closely at those documents, I see reference to “der Wilde hunt”. That's not proper German, but it's plainly meant as a reference to the Wild Hunt, a motif of Northern European folklore. An it's worth noting that Hitler modelled his own appearance on that of the principal figure in Die wilde Jagd, a painting by Franz Ritter von Stuck (Hitler's favorite painter) depicting the Wild Hunt.

(I do not mean to cast any aspersion on Stuck in noting his rôle here.)

I love the art in this, I'm a bad art spotter but I've definitely seen it before. It's a little stiff in places but that's a minor complaint. I love the splash!

The ending of this story makes me think Dr Miracle wasn't actually trying to save the actress or stop a fifth column; he just needed his movie schedule not screwed up!