Number 2516: What is news is the news itself 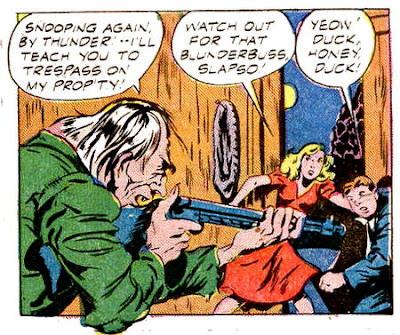 “Blonde Bomber,” from Harvey Comics’ All-New Comics, was a wartime newsreel reporter, Honey, who had a camera man, Slapso. They were out looking for stories to tell. The stories of Honey and Slapso are old fashioned, but Honey also seems modern. I am not sure how many women in that time (with the exception of Lois Lane and Brenda Starr) were out beating the bushes for news. So I see Honey as ahead of her time. (I remember when network news was solidly male. The times, they are thankfully a'changin'.)

This episode with the cool splash panel that has nothing to do with the story except draw us in, is from All-New #9 (1943). Female artists are sometimes credited for this feature, but the Grand Comics Database has no writer or artists listed. Time marches on! Maybe someday someone will tell us who drew it. 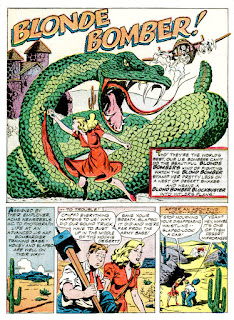 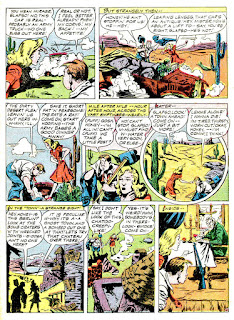 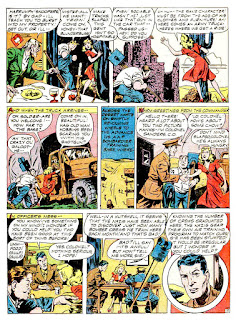 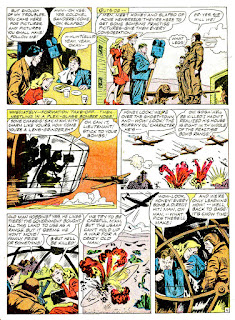 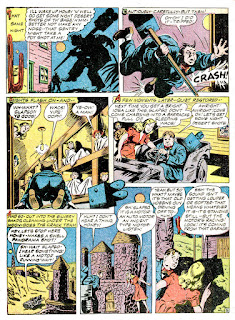 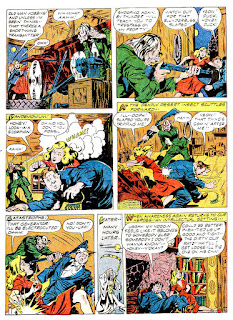 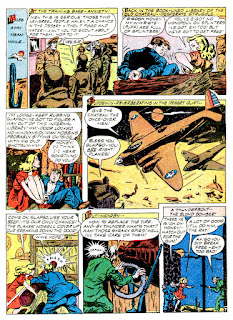 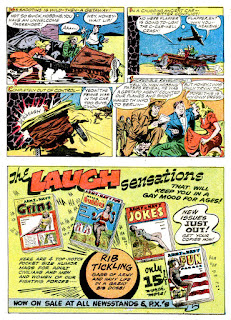 Not to be picky, but that has to be one of the most under-researched newsreel cameras in comics. Not to mention that the tripod is missing two legs.

I think the either the splash panel should have featured a scorpion, or Slapso should have instead been terrified by a snake on page 6. (Yeah, scorpions aren't insects, but I'm pretty sure that the arthropod was intended to be an arachnid.)

The side-kick who screws-up and thereby allows the villain to continue is an extremely annoying trope, but I don't know that I'd previously seen a side-kick immediately endanger anyone so much as a result of mindless cowardice. I would have been happier had Honey left Slapso to his fate after freeing herself. (She didn't probably need his help to knock open the door; she likely could have left through a window.)

The idea that the US Army Air Forces wouldn't have forcibly removed Hobbins is of course at best naïve. And, even to-day, what is called “precision bombing” isn't very precise, and would have been still less so in 1943, especially with trainees doing the bombing.

What would our armed forces do without a hot blonde and her chubby comical sidekick? Next to nothing, it seems, because they couldn't find the spy out of ... ONE SUSPECT. Yeesh!

Smurfsmacker and Brian: That must have been one cheap newsreel production company the characters worked for. They apparently weren't hired for their brains.