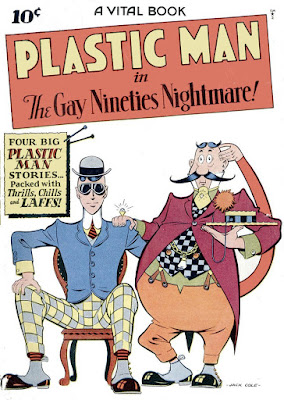 Any comic book fan who loved Plastic Man would have been ecstatic to pay 10¢ for Plastic Man #2, issued in 1944. All new stories and great artwork from Jack Cole. Yow! The thought of confronting it for the first time makes old Pappy go all mushy with delight.

It was not published by Quality Comics, which published Plastic Man in Police Comics as a company called “Comic Magazines” with offices on Lexington Ave. in New York City. Instead it was published by “Vital Publications, Inc., New York, a division of Wm C Popper and Co., ‘Book publishers since 1893.’” The reason for Quality Comics jobbing it out to another publisher was undoubtedly the paper rationing during World War II. During the war a publisher would be smart to pay a sub-contractor to have a book printed with their paper ration, rather than having to cut back on a couple of issues of regular monthly or bi-monthly periodicals to have the printing done.

In my not-so-humble opinion, this issue of Plastic Man is one of the best comics published during that time. “The Gay Nineties Nightmare” is the lead story, and got the cover, also. 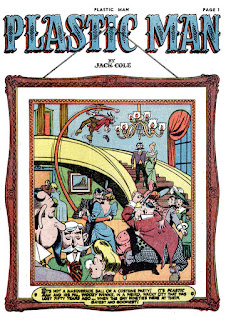 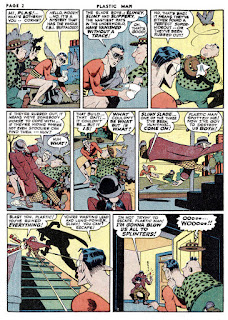 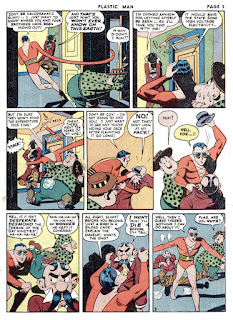 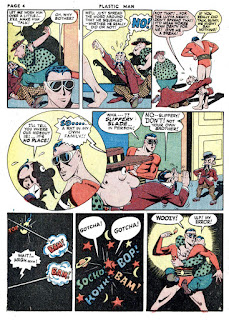 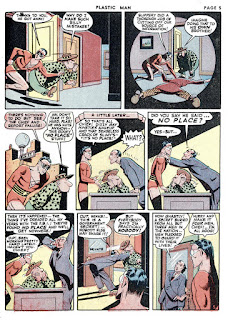 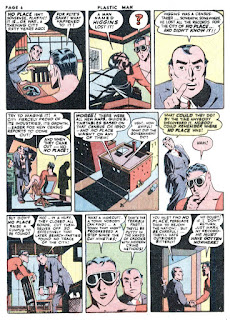 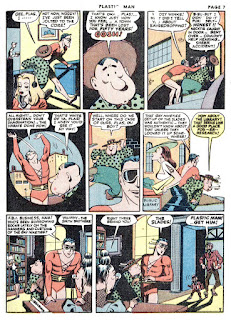 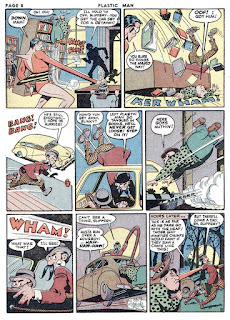 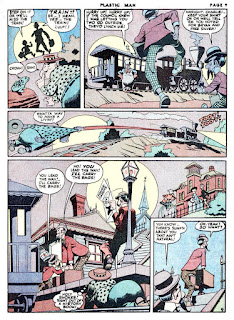 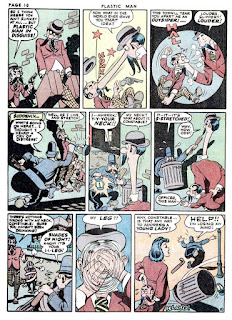 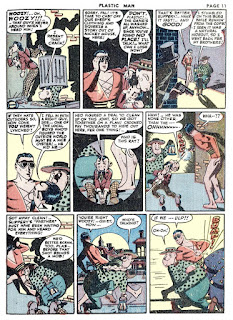 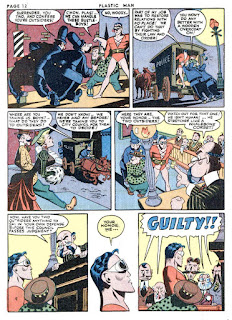 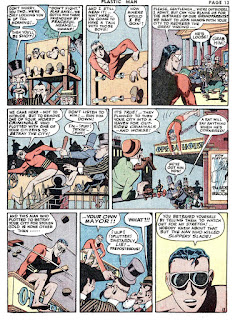 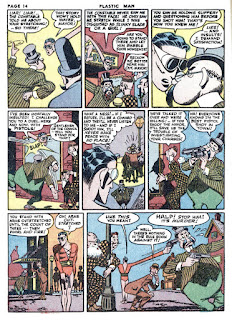 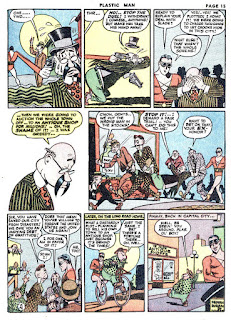 It would have been more economically efficient if publishers had simply been able directly to buy the paper allocations of other publishers, instead of indirectly doing this by the device of licensing or subcontracting publication. However, by the very same token, it would simply have been better not to ration commodities administratively in the first place, and to have the Federal government make its own purchases at rates determined by the market. Wage-and-price controls and Federal rationing programmes were a way of disguising the costs of war by turning them into things such as shortages, waiting times, and search costs.

I notice the expression “white of you/him/her/them” in 7:4. Notions of whiteness had been inconstant across time and across persons, whiteness variously being imagined as a race, as a subgroup of a race (with folk such as Jews, Italians, and the Irish excluded), as a culture, and as an ethos. It's that last conception that is used in Woozy's remark. Quite possibly, Cole didn't think about any other associations in having the character use the expression. (For a more grim instance of a character making such a use with irony unintended by that character but fully intended by the writer, note Donald Martin in The Ox-Bow Incident [1943] demanding that someone amongst a group of men act as a “white man”, though the only person making any attempt to treat him humanely is Sparks, an African-American.)

There have been many Lost City stories, but Cole may be the only writer to have set such a tale on the surface of Twentieth-Century America! There's not much point in critiquing the cartographic and social issues, as the whole matter is intended to be absurd.

It's a fun read, but it's also a little less kinetic than your usual plastic man story. The art is still super on point, Cole never fails to turn in great work.

Daniel, I remember "that's white of you" as being quite common during the '60s. You pointing it out reminds me of words and phrases that are now not used in public. In my parent's generation they weren't even thought of as rude. I'm sure they are still used in private conversations because human nature hasn't changed with the times.