Number 2350: Crusade of the Time Retarder 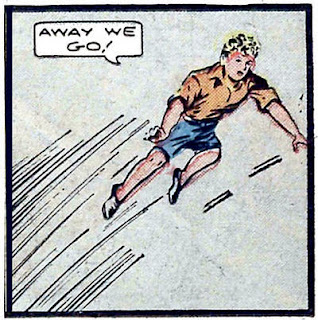 Rodney Kent and his boy companion, Mark Swift, get in their Time Retarder to travel to the days of King Arthur. But, ooops! The controls are “clogged,” which I interpret as stuck. Their time travel ends in the midst of the Crusades, and like many a comic book time traveler of fiction, they meet famous people. Their clogged controls have taken them to a battle between Saladin and King Richard the Lion-Hearted.

Kent uses his pistol, and just as quickly loses it during an act of treachery. You see, he has both interested the Lady Edith, and invoked the wrath of another swain, Sir Simrak. “Sir Kent” as they call Rodney, is a man of charm. When Lady Edith proclaims her interest in him by saying, “Never saw I a man like thee!” he responds with, “You’re not so bad yourself, Lady Edith!” I’ll bet Sir Kent would do well at a singles bar with that line. (Sarcasm, of course.) Sir Simrak pays back her lack of interest in him by going to the enemy with a nefarious plot in mind.

The feature is named after Mark, the youngster, and only lasted for the seven issues of Slam-Bang Comics, from Fawcett. I believe the title probably did not last because it had no costumed super heroes. Mark is a brave, resourceful boy, but I ask why his adult companion has put him in such mortal danger. Perhaps retarding time has affected Kent’s supposedly more mature judgment.

Writer and artist unknown by the Grand Comics Database; from Slam-Bang Comics #2 (1940): 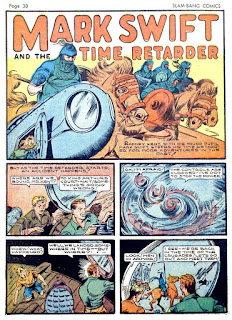 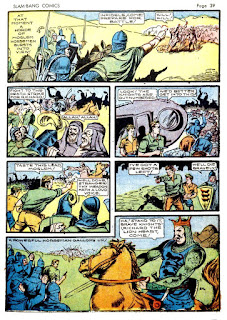 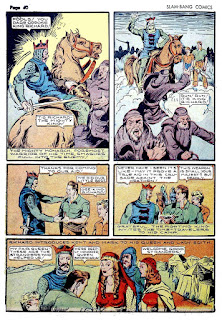 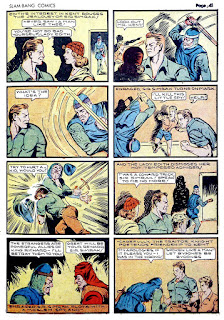 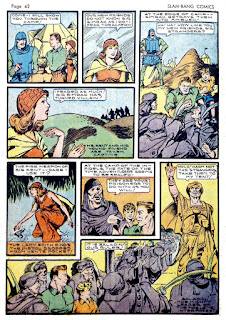 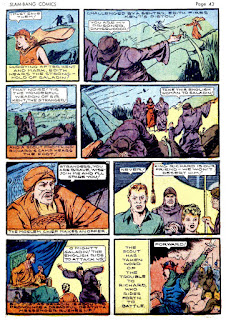 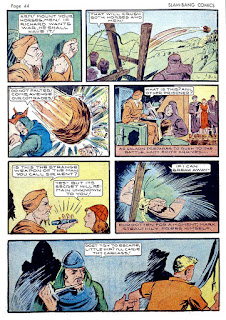 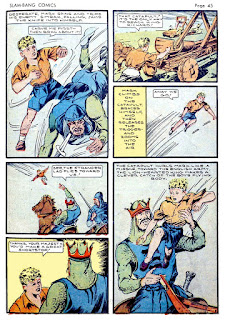 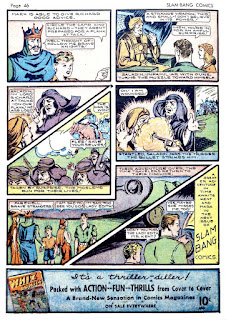 It's interesting how often, in time-travel stories, the distant past or distant future is imagined as if a different place somehow at the same time. Thus, in the case of “The Lost Kingdom of Athala” the second batch of travellers, after twenty years go back to a time twenty years later than did the first batch. And, in this story, Kent wonders whether Lady Edith misses him, years after she had died.

(One can actually make that conception work, though. Imagine that the universe is huge in a way that makes its now apparent size seem insignificant, and imagine that at some very distant place the universe is perfectly as it was here, 500 years ago. In that case, being somehow swiftly or immediately transported to that other place would be perfectly indistinguishable and thus identical to travel 500 years back in time.)

I suppose that I'd just be preaching to the choir were I to comment on the valorization of the Crusaders here. (As for me, I'd try to avoid taking sides in a clash amongst imperialistic oppressors.)

Instead I'll note that, not many years earlier, American popular culture was far more sympathetic in its depiction of Middle Eastern culture, with films such as The Sheik (1921), Thief of Baghdad (1924), and The Son of the Sheik (1926).

My guess is that Mark Swift were named after Mark Twain (because of his A Connecticut Yankee in King Arthur's Court) and Tom Swift.

I think that, as well as costumes, to survive Kent and Swift would have needed art that were cleaner and with less faux-elegance.

Daniel, comic books about the past (as well as movies) are probably the reasons kids flunked history class.

Thanks for the catch on "Mark" as paying homage to Mark Twain. I totally missed that one!

I would not like to travel back in time unless I had something to block out the body odors of the inhabitants. That never gets mentioned in these types of stories.