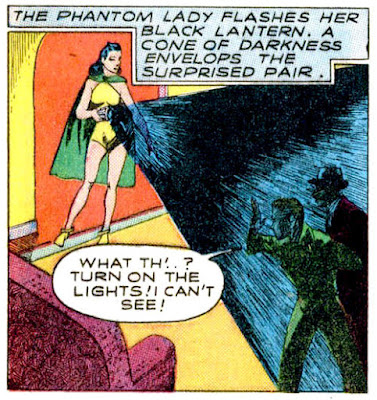 Phantom Lady, who went on to infamy, had a modest beginning at Quality Comics in 1941. Arthur Peddy signed the first Phantom Lady appearance in Police Comics #1, which I am presenting today.

Peddy co-created the character (writer unknown) for the Eisner-Iger studios, which supplied the contents of early Quality Comics. Her gimmick, besides being a United States senator’s daughter, was the “flashdark,” a portable black light, putting crooks literally in the dark.

Peddy went in the Army, and Phantom Lady was turned over to Frank Borth, before disappearing from Quality. She reappeared for Fox, when Jerry Iger revived the character. Along with Rulah, Phantom Lady was one of the mainstays of Fox’s late forties’ sexy comic book heroines. 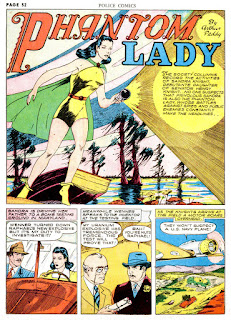 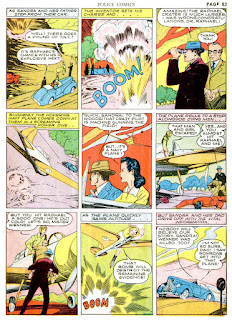 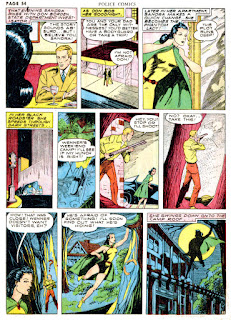 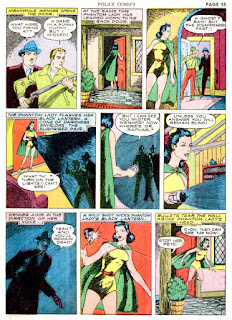 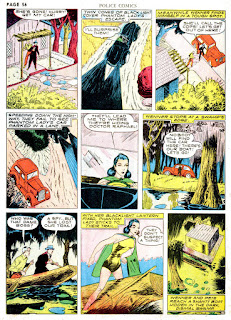 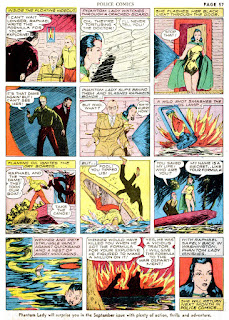 The story's not much, relying upon wild shouts at two separate points, serpentibus ex machina, and elements that figured all too often in pre-war stories of military production.

But I at least enjoyed the art, which has a combination of the primitive and the elegant.

Not the best writing in this one, it's wooden, and worse it seems rushed at the end when suddenly (needs a caption: SUDDENLY!) the paneling increases and a lot happens at once.

I don't know why I noticed this, but she never actually hits a single person in this story. She certainly causes their deaths, but basically through inaction. As a matter of fact, she doesn't do much!

This comic shows a distinct lack of cheesecake. Come on, artists! Up your 40s game!

Daniel, I like your assessment, "combination of the primitive and the elegant." I assume that Peddy was using some visual reference for Phantom Lady, fashion magazines, Vogue and such, which was smart. The primitive is when he tried to mix that elegance with the sock-bam-pow comic books, which leads to what you and Brian both pointed out: nothing much happens.

Brian, I agree with the cheesecake, but in 1940 cheesecake was mostly a leg show, y'know? Anything above about mid-thigh was kept rather modest. That is until you got into the Spicy pulps, which were also boob show, but that is probably a topic for another day.