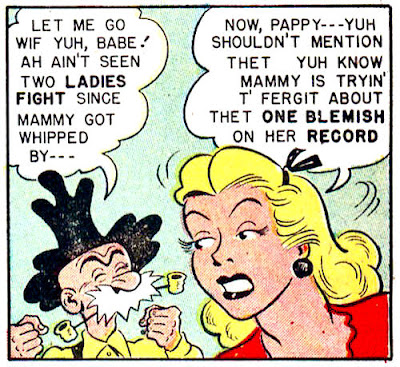 Boody Rogers’ Babe was a hillbilly character inspired by Al Capp’s Li'l Abner, and also had the additional element of Rogers’ assistant, Eric Stanton. Stanton went on in his career to a very specialized underground of fetish artists. For Boody he not only drew but allegedly helped with plot ideas, and “Mrs Gooseflesh,” from Babe #4 (1949), fits into the bizarre category. Stanton is caricatured in the story, a dapper little man with Stanton’s birth name, Ernest Stanzoni.

Mrs Gooseflesh is a woman who likes to break necks. And the story races at a — you’ll excuse me — breakneck pace to the last few panels, which show how far into the realm of physical “comedy” Boody Rogers was willing to go. 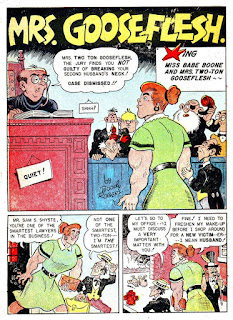 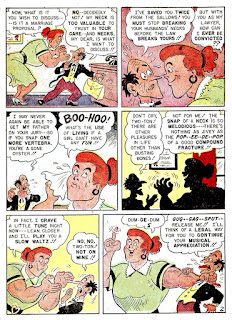 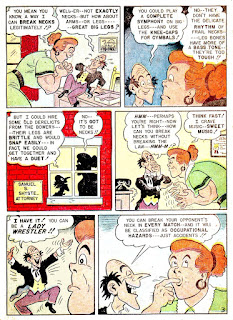 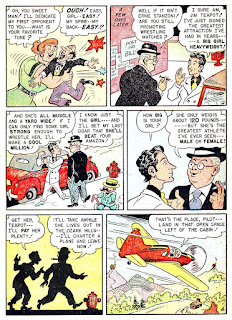 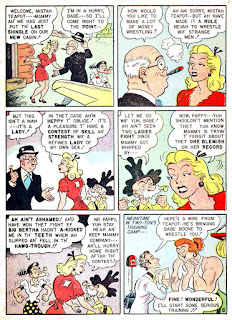 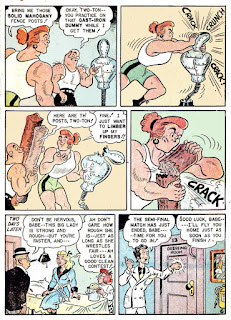 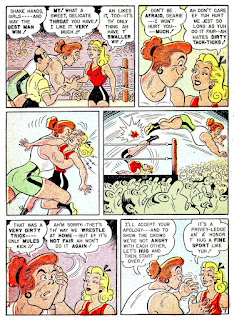 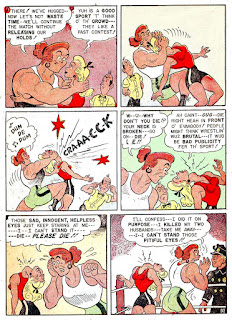 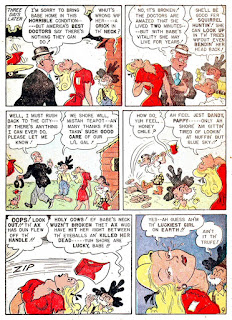 Is anyone else hearing Verna Felton's voice reading Two Ton's lines? As for Babe, she'said not only as strong as Li'l Abner, she's just as *smart* (unfortunately...) as far as a distaff version of Li'l Abner goes, she's way more interesting than LONG SAM, Lubbers art to the contrary.

Cartoonjoe, good lord! I haven't seen or heard that name in decades, but watching this short tribute to Verna Felton on YouTube brought back how funny she was. Thanks for the reminder.

Brian, squeamish as I am about broken bones, the ending reminded me that Boody Rogers' weird humor was sometimes too weird.

I agree entirely with that comment. Which is a shame, since the rest has so much going for it.

I'm interested in anything before about 1980 that has female bodybuilders, including cartoon ones, and Two Ton is a pretty entertaining one of the villainous kind.

Also, a lot of people would be surprised to hear a character worrying about wrestling getting a "brutal" image, as opposed to the opposite kind, but I guess that was the point of the joke.

Grant, I'm not against morbid humor; Chas Addams made a living from it. But in the case of this episode of Babe, maybe there is a line to be drawn somewhere, and for the 1940s, even the 20-teens, maybe Boody stepped over that line.

It is a matter of taste, but I can't see Chas Addams using such a gag. (If he did and I haven't seen it, I will take that comment back.)