Number 1803: Men in Space: Secret of the Flying Saucers! 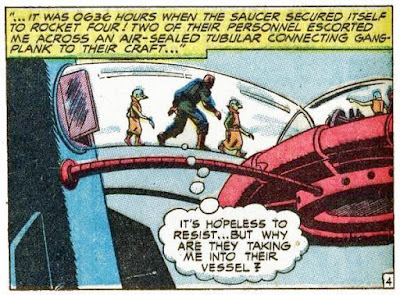 This is the second of our Men in Space theme week. In this case the story is about a man who is taken aboard a flying saucer.

In the sixties there were UFO flaps around the United States. UFO sightings made the news, fueling further speculation about a flying saucer “mystery” that had been going on at that time for 20 years. When I was in the U.S. Army in '67 and '68 there were a lot of paperback books about flying saucers circulating around the barracks, several of them promising an answer to the mystery. I read some of them, and the cover of each one promised the real, true, amazing answer to the riddle of the flying saucers. Yet each book presented a different real, true, amazing answer. I love stories about UFO/flying saucers, but I am a true skeptic. Land a flying saucer in front of me, have the aliens come out and talk to me, tell me what the “secret of the flying saucers” is, and I might believe it. Of course, I would never make the mistake of Captain Martin Croft, in this tale from Strange Adventures #2 (1950). I would not tell anyone about my experience. Marty was not believed. With a wild tale like that the only thing anyone would believe is the teller is in need of some strong medication. 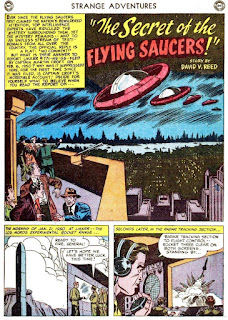 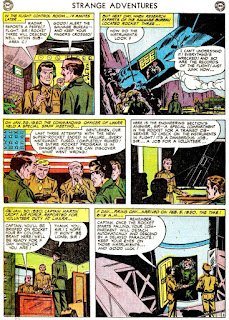 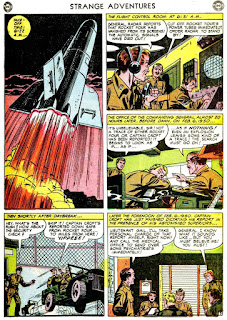 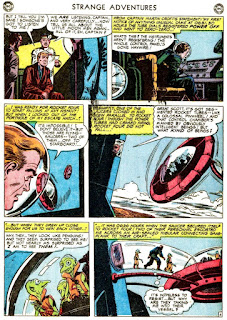 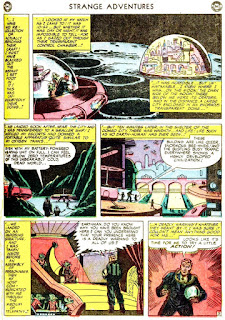 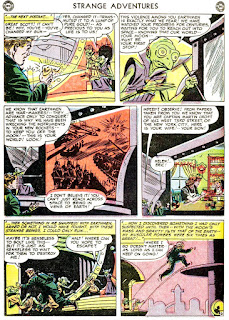 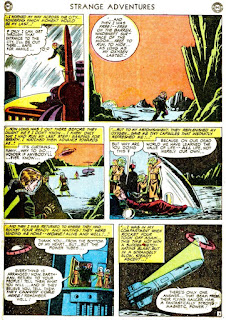 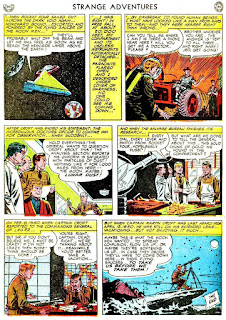 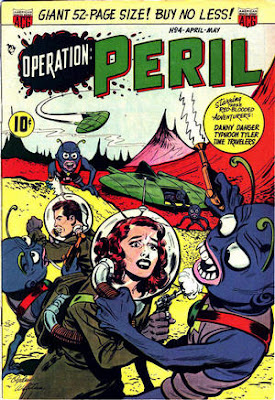 Next issue: "Flight of the Penguins!" I wouldn't have believed Croft, either. What a crazy story. Am I the only one who finds Jim Mooney's art boring?

Mooney's art makes this look rather like a story from DC from the late golden age, and with better inking it would have looked like a DC story from the early silver age. But the willingness to questions human goodness, and the ambiguous ending are of course quite different.

There doesn't seem to have been a particularly good reason for Croft keeping his helmet on after returning to Earth; presumably the air would have been breathable (back in 1950); and, anway, the helmet was cracked.

Lovely, wise little aliens that every kid would love to meet. They look like Kappas, more or less.
I was impressed by "the Endless War" and this one is also a good moral tale. I really appreciate Mr. Levine's skill as a writer.
Captain Croft summarizes the UFO problem with a dilemma: "If you don't believe me, I must be crazy. If I'm not crazy, then something must be done." The General answers him with the proverbial "Talleyrand's solution": It is urgent to wait!

UFOs were indeed a big craze in the 60's and 70's, now it looks like it has slowed down a bit in people's hearts and minds, like everything connected with the Space Age. Surely someone made big bucks out of it (I'm thinking of Adamski, Siragusa, Ashtar Sheran and all those crazy "Contactees").

I also remember fondly an american tv series loosely based on Project Bluebook and called "Project UFO", but what I liked most was, of course, the 1970's Gerry Anderson's series.

J D, thank you for reminding me of both of those '70s shows, Project UFO and the Gerry Anderson series, UFO.

Project UFO was produced by Jack Webb, famous for Dragnet and the no-nonsense Sergeant Joe Friday, Los Angeles Police Detective. It only lasted one season, and I thought it interesting enough to watch, although the lead actors played the Project Blue Book investigators the same way Webb and Harry Morgan played the leads in Dragnet.

The only reason I can think of that the program got on the air was becuase of Close Encounters of the Third Kind reviving interest in UFOs.

OMG PAPPY My sis Deb shot video of a flyering saucerer yo OMG!!!!!!! https://vine.co/v/eVuHZhmxUBQ Sum say its meerly tha Moon but how culd THA MOON move around like that? Plus u can C it change shape so its tha classic morphing UFO yo OMG Yay! <3

JD, we R frends w/ Timothy Green Beckley & our mgr was frends with tha L8 Gr8 John A. Keel ("Mothman Procephies") & nobuddy made $$$ off any of that UFO stuff LOL Nun of em dyed rich or anything LOL! Will Smith made more $$$ off tha Men In Black then John Keel or Gray Barker or any1 xoxoxoxo

On Ryan's question: personally, I don't think the art is "boring", though I would say it is a little crude.
My problem is, I'm used to the Jim Mooney of the 70's, the slick, elegant artist who drew Spidey and the unforgettable Omega the Unknown.
Here, I probably wouldn't have spotted Mooney without a hint. He has changed so much from the 40's to the 70's, he has improved his art greatly.

Improvement with time is not to be taken for granted. I recently read some Horror comics of the 50's drawn by Don Heck and I think he just did quite the opposite: his art was more accurate and dynamic (and in a way, more interesting) in Weird Terror and Tales of Suspense than in, say, Giant Size Dracula.
Now I wouldn't call it "involution", but certainly Mooney took a different path (just my opinion, anyway).
Part of my fun in reading comics is to check this "evolutionary road" of artists.

J D, your comments on Heck remind me that a couple of days ago I was sent a PDF of the book, and when I get the time (hopefully this weekend) to read it I can (also hopefully) do a review.

I try to avoid commenting on whether I think an artist is any good. Jim Mooney was a veteran artist whose work started appearing in comics about 1940, and when he later worked for DC I thought he was given somewhat static scripts to draw. That was the fault of DC, not Mooney. Someone once commented in this forum that DC had a "deliberarely boring" style across the whole line for many years. It wasn't any artist's fault, since artists had editors telling them what to draw. My personal opinion is that Mooney was part of what I would call a generic look of DC Comics in the fifties and early sixties.

Alicia, how many writers die rich? Not very many. Not even writers who write provocative books like John Keel.

"Shades of Gray" (not "Fifty Shades of Gray," just "Shades of Gray") is an interesting documentary on Gray Barker, and my impression is he was someone who liked to play tricks on people who took Ufology too seriously.

As for Will Smith, he probably steps out of his house and makes more money than all the rest of us put together make in a year. It's unfair, but I didn't make the system.