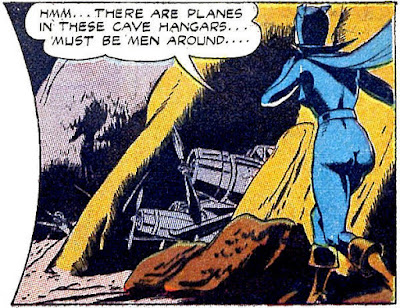 Nazis get the tables turned on them in Yugoslavia. They think they are spreading cholera germs, but they are actually spreading ipecac powder* which makes a person vomit. When the Nazis get sick they think that cholera has turned against them. My first of two favorite lines from this story, “Ohh...do something! Der Fuehrer vill have a tantrum!”

My second favorite line comes from our slinky heroine, Black Angel. While friendlies are pouring ipecac into food bins she says: “How I’d love to drop enough ground glass in with it to make a first-class stomach-ache!” Vengeful, isn’t she? I would not have ever bet against Black Angel. And I wonder what happened to her after the war. Did she get married? I'd worry if she was still thinking about ground glass. Used against a husband, she'd be renamed the Black Widow. 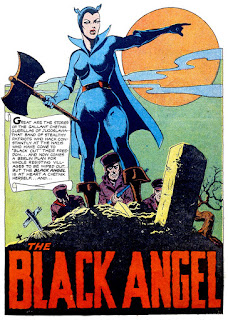 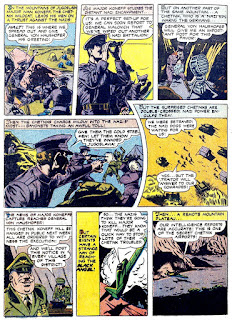 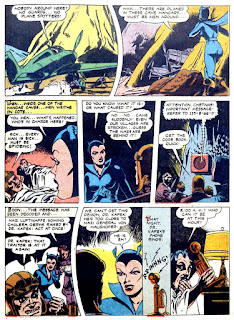 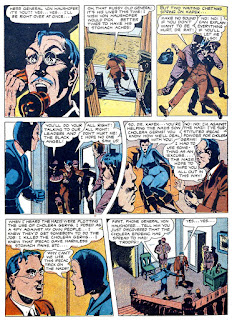 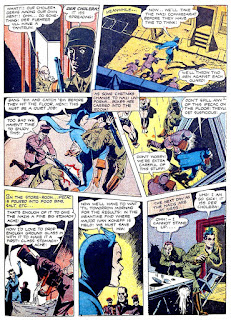 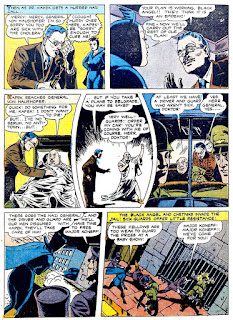 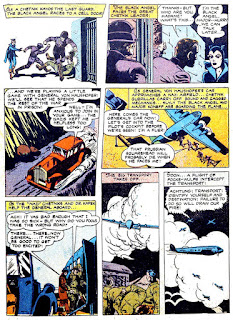 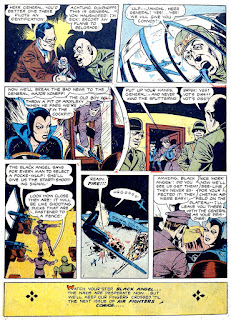 *Ipecac syrup was once commonly kept in medicine chests. Purging was one way to fix a tummyache. I don’t remember my mother using it on me, but maybe I have mercifully forgotten.

I believe that, after the war, the Black Angel went to work as a talent scout for Messrs. J.A.S. Coutts and I. Klaw.

When last I knew, it was recommended that owners of cats keep syrup of ipecac in their kits for feline first-aid. I don't imagine a cat forgiving the administration.

(One may impress others at parties and at job interviews by revealing to them that horses and mice are unable to vomit.)

Nice story and art. Black Angel wasn't always so hard-nosed and businesslike. I remember the tale where she was so in love with some guy and they both fell into the clutches of some Nazi villains. Didn't you post that one, Pappy? I was rather embarrassed for BA.

As for what happened to her later, an aged Sylvia Manners showed up in one of the 80s Valkyrie miniseries that were connected with Eclipse's Airboy continuity. I believe she was an ambassador or some such. She came to Valkyrie's rescue. By the end, her assistant (or something like that) had donned the Black Angel costume. As if to hit us over the head with it, writer Chuck Dixon made the new BA an African American. She went on to co-star with Valkyrie in some one-shots.

Ryan, I have that Valkyrie mini-series. At the time I was impressed by the Eclipse revival of Airboy. I's been so many years since I read the series I wonder if I would feel the same now.

Yes, I did post that Black Angel story you mention, last January. Pappy's #1689

Daniel, my cats, the Feline Four, need no ipecac to make them vomit. Watch your step around my house after a feeding.

I will definitely use that information about horses and mice, probably at Thanksgiving. When gathered with family around the table, all of us digging in to our mass quanities of calories, I will say, "I have it on good authority..." and repeat what you have told me.

I remember references to ipecac in Mad when I was a kid, but got the impression it was already passe.

However, I did read the Israel Bond (agent Oy-oy-seven)spy satires way back when (1966 or so) and in Matzoball (derived from Thunderball, obviously) the evil Dr. Nu utilizes a computer called IPECAC. It's been a while since I've read any of these and I'm sure they're even worse than you might think. (Sister Sweetcakes, "the Swinging Nun", another traumatic memory burned in by these books.)

And Kurt Vonnegut had an EPICAC computer, which may have been the source for Sol Weinstein's Evil computer, and the inspiration for a Twilight Zone episode, "From Agnes, With Love".

One thing interesting about this story -- in most of the stories where the hero is a attractive woman in a skin tight outfit -- as many chances as possible are made to show the good girl art; it's here in places (the first page) but a lot of times she's either way in the distance or just not in the scene at all. Somebody didn't get the memo!

Brian, true that. If Black Angel had been appearing in a Fiction House title she would be spilling out of every panel, and the guys would be in the background.

Russ, I wish I had seen those Israel Bond books...I've heard of them, but didn't see them. Along with looking for comics, I haunted the paperback stands of the local magazine store looking for cool paperbacks. I would have seen those had they been available. Maybe they were considered under-the-counter.

I remember a similar satire, Fickle Finger of Fate by...of all people...John Keel (Mothman Prophecies). I thought that was pretty funny, although not as funny as his books on UFOs, which are unintentionally funny.

But that has nothing to do with ipecac, does it? I think it was a medication around even before my grandfather was an M.D., back in the 1920s and '30s. My dad told me that enemas were used a lot for upset stomach. He said the kids in his day had so many enemas that when they'd play Army, the sentry would holler, "Friend of enema?"

The Israel Bond books have been recently re-released, including an omnibus of all of them in one volume. I'm kinda afraid to look, because they seemed so hip at the time (excerpts appeared in Playboy) and I'd hate to be disillusioned.

Russ, the Amazon.com posting for John A. Keel's The Fickle Finger of Fate gives a credit to Jaffee for the illustrations. New Saucerian has reprinted the book.

Amazon also has the Oy-Oy-Seven compilation, some Kindle editions and even a used paperback or two. I do not know why this series slipped by me; I have spent 50 years in every used bookstore I can find, and have never seen or heard of the books until now. Tsk tsk. Obviously there are gaps in my knowledge which I would like to fill in.

This comment is too long delayed to be seen by most readers, but I just yester-day learned of this story: “Eugene Lazowski created fake epidemic to trick Germans”.