Number 1806: Hooray for Halloween Horror: Dying for love, and a head for murder 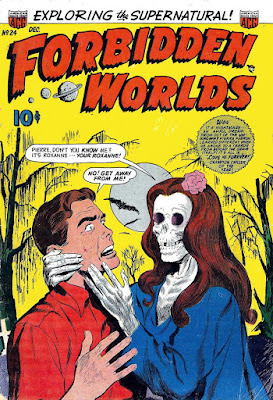 The look on the face of the guy from the splash panel of the first story is familiar to me. 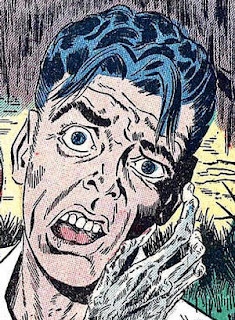 It is the look I present when puzzling over what to say about stories like these.

Here goes. What I can say about “Love Me Forever” is found in the old adage: “Be careful what you wish for. You just might get it.” The second story is about greed, and revenge from beyond death. Oh, and a head swimming in the ocean, no less. In their pre-Comics Code days, ACG published horror comics that were a bit lighter in tone than most horror comics. In a good percentage of them the main characters would be a young couple in love who are threatened by some supernatural menace. The guy fights it off, and the couple walks off arm-in-arm in a Hollywood ending. At a later point, as other comic book companies started going more for gore and visceral thrills, ACG tried for an edgier approach. I believe that was the intent here with both of these offerings. Did they succeed? At best I give them credit for effort.

Both stories were drawn by Kenneth Landau. I have shown some ACG stories from Landau before. Just check out the link below for an example. Covers are credited by the Grand Comics Database to Ken Bald. 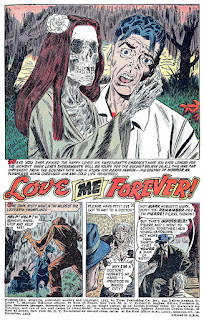 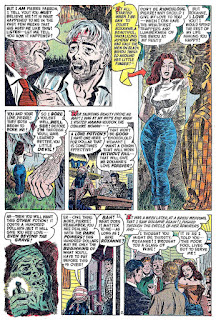 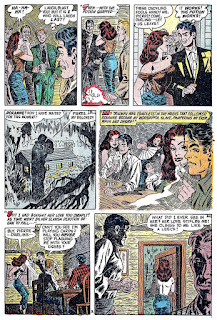 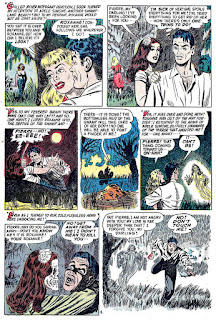 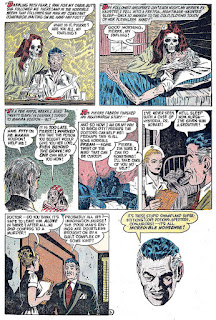 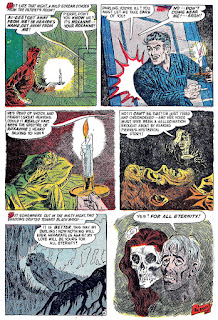 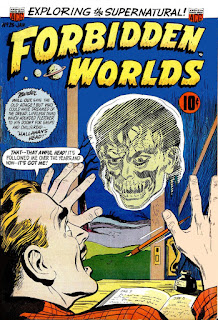 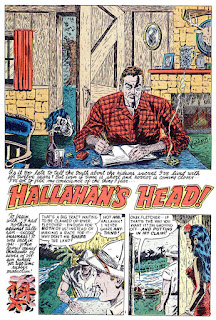 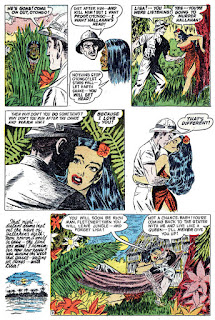 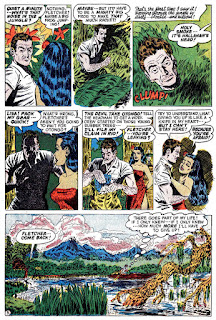 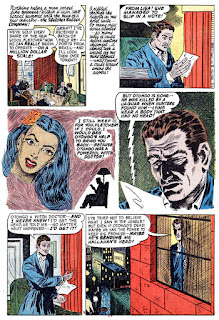 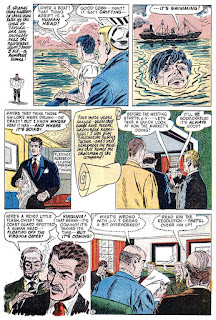 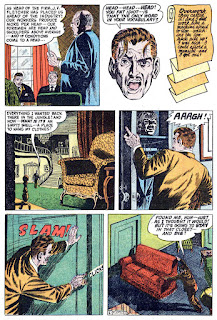 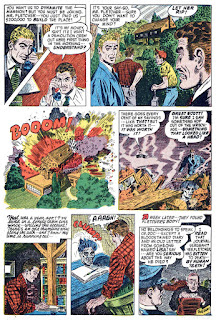 One topsy-turvy story by Landau, published pre-Code, then Comics Code approved a few years later. Just click on the thumbnail: 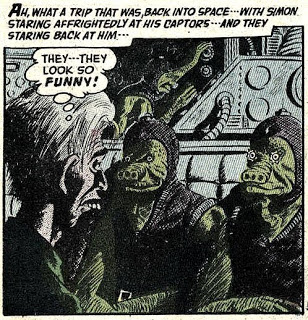 D_ng! People in that part of Lousiana aged badly! Doc Hobart had grim expectations for sixty years old, and he himself looked pretty old for someone in his 30s or 40s!

There seem to be eleventy zillion stories about people pursued by the heads of corpses. These stories are usually sustained by series of bad choices on the part of the heads' opponents. I don't imagine myself doing anything that would subject me to such persecution, but if so then I'd get the thing properly encased or incinerated, not leaving details needlessly to servants, &c. And I figure that, if a head did somehow leap at me, I wouldn't just arm-flap as it bit me.

It's interesting to realize that Forbidden Worlds. managed to last from an issue for July-August 1951 to one for August 1967. My brother and I used to have issue #145 (for March-April 1967); I believe that he got it when we divided the collection.

Dan'l, it would be plenty scary to have a disembodied head floating after one. As scary at least as having a headless body still walking. (Right now I am thinking of the movie Re-Animator, and its gruesome lab scene which gives a whole new meaning to the word "head.")

I went through a period in 1959 of collecting Forbidden Worlds as well as the other ACG supernatural comics. I was also buying the pre-Marvel monster books at the time. For all of the silliness of ACG, I still have some nostalgia for their comics.

In 2012 I posted a story from the last issue of FW, also illustrated by Kenneth Landau.

Nice one, Daniel. I didn't even notice the fact that Hobart looked too old to have been Pierre's classmate! I was too intent on the amazing coincidences in that first scene: Pierre's looking for a doctor and not only FINDS one in the swamp but one that he KNOWS! This has got to be a R.E. Hughes script. But Landau's art is nice, and his two splash panels are a trip: Pierre looks like he's just had his neck broken, and the walking head seems to be having a great time preparing to prank Fletcher. About Landau, though, I could find almost nothing online. To have been as good as he was, it's remarkable that he's still almost totally anonymous. Maybe it's because he spent the 80s in animation, but, still, no little Ken Landau Fan Club somewhere? And what did he do those other decades?

This makes me think of what perhaps is the silliest "head villain" in a Horror story: the severed, sentient and bouncing head of the Nazi scientist Otto Von Schmidster, aka "The Brain". It appeared in TWO stories, no less (Adventures into Terror n. 4; 6, 1951). I read it when I was a kid, and couldn't decide if I should have been scared or just laugh at the concept. If you don't remember him:

First story, last panel. The look on his face is that of one husband three weeks after Honeymoon...

Happy Halloween to you all :)

I don't remember what my look was three weeks after the honeymoon, but then, I don't think we ever had a honeymoon! A day or two after we were married Mrs. Pappy went back to work and I went back to looking for work. It was a real long time ago. Memory fades.

Ryan, yeah! Re-Animator is just one of those movies that despite being exploitation ("Boobs, beast and blood" as the head of Troma once explained about the three things those films must have) turned out a lot better than I think even the filmmakers expected.

Today I dialed it back to another era, and watched a couple of Universal Frankenstein movies. They were an enjoyable, but also total, waste of time. Tonight I am making up with work for the time spent today with images of Boris Karloff flickering from my TV.

If I accomplish anything, maybe by posting stories by Landau he will get more attention from fans of Golden Age comic art. I think at times his art got a bit fussy with all of the pen shading, but overall I find his work pleasing.