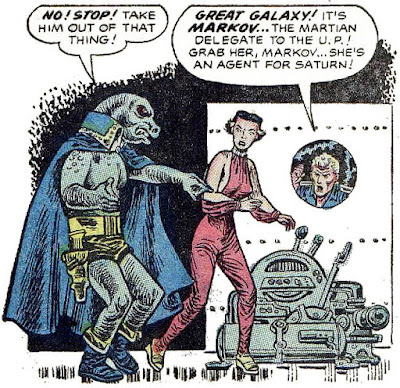 Our final post from our Men in Space theme week: a double treat from two of Atlas Comics’ top artists, Joe Maneely and John Romita.

Romita became one of Stan Lee’s top Marvel Age artists when he took over Spider-Man from Ditko, but he was good from the beginning of his career. His work at Atlas shows he was already a top-notch talent long before he made his bones drawing a wall-crawling superhero.

Joe Maneely, though (sigh)...I have spoken of him several times, and always with the wish that he could have lived (he died in an accident at a very young age). 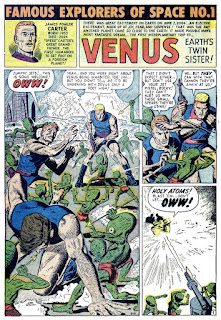 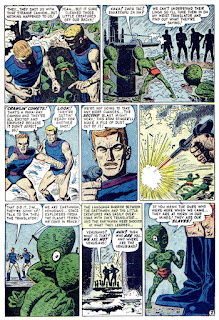 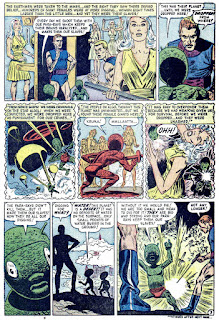 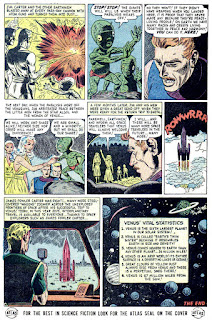 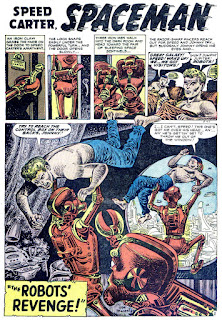 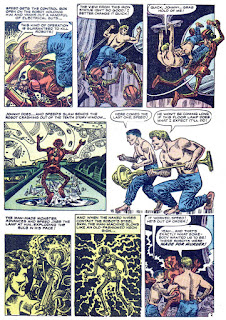 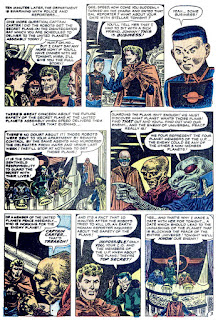 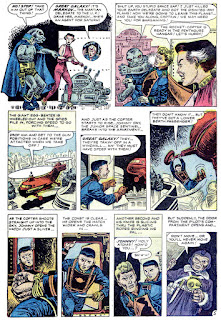 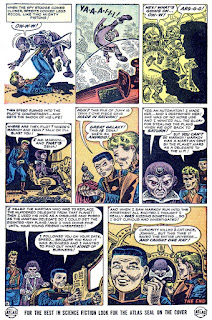 More Atlas Maneely and Romita. Just click on the thumbnails. 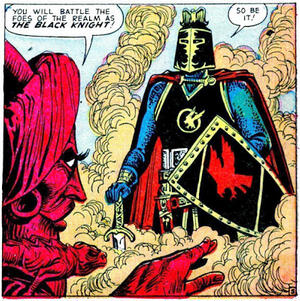 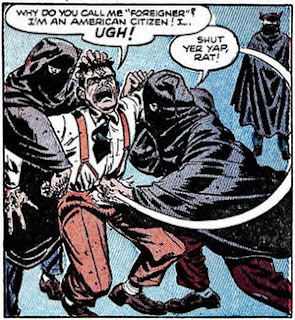 I confess I had to look at the signatures to figure out which one was Romita, one of my favorite Silver Age artists. Looks like he may have even been trying to ape Maneely's style at that point in his career, or at least for this particular publication. Still great to look at, though.

Crawling Comets! Holy atoms! Para-Rays and androids with a "Made in Saturn" label.
It's nice to see so many funny clichés in two stories.

So Venus is populated ONLY by giant gorgeous women? This may seem a little too silly, even for 50's standards. How do they... well... maybe they are vegetal life in human shape or something. Parthenogenesis maybe? But they are wise gals. They know that happiness is not a matter of size, and I'm sure that those little guys will do their share gladly.

In the Maneely story ("Cold War in Cold Space" would have been better as a title), the Venusian delegate is less beautiful, but a female nonetheless. Could it be that it has something to do with the name of the planet? :D
This time I spotted Romita at first sight. Who knows what could have Maneely achieved, if he had the chance to improve his art. That Black Prince Knight Valiant sure looks great.

Maybe I've just not been observant enough, but I had always thought John Romita, Junior's art was very different from his dad's. However, with "Venus: Earth's Twin Sister," I can definitely see a likeness in style. Perhaps it just depends on who's inking; I guess Senior had a slick inker on Spider-Man, eh? This story was definitely more comedy than serious sci-fi. The "Jumpin' Jets" and "Holy Atoms"...geez, Robin should sue! Plus the panel with all the little green guys lying on the ground like discarded dolls was so cute! And, of course, the planet of giant females being enslaved by green midgets--that was almost too much.

I agree with Kirk: the art styles for the two stories were strangely similar. Who was aping whom? Maneely's piece is just a little more cartoony looking than Romita's--it looks like it could have been an outright Mad-kind of parody of something. I can't say I look at this story and see the next Jack Kirby, as Lee said Maneely would have been. But I do agree with Dr. Michael Vassallo, who wrote this of Maneely's work: "Crisp, uniquely inked, busy, and action oriented. Not necessarily pretty, but vivid. It was a style unique to comics and difficult to imitate." (One of Vassallo's Maneely-centric columns is here.) And, honestly, any artist who could get Steranko to gush about him must have been somebody.

I do have a question, though, Pappy. Maneely's Wikipedia page includes this passage: "Columnist and historian Fred Hembeck said, 'While we may've heard of the pivotal day a young [John] Romita spent with the tragically doomed yet immensely talented artist Joe Maneely, listening to him describe it as one of the most important days of his entire life gives the familiar tale an added gravity.'" Can you explain this, Pap?

The planet that is blocking the peace of the entire universe -great gallivanting galaxies! It's stooges from Saturn! The writing in the Speed Carter comics amuses and charms me. And so with the art, too. Looking through the links to the other flying saucer stories, we see numerous nefarious plots from Saturn and the Moon. We'll keep a telescope out like the characters in the stories and hope the scoundrels from space to come on an overcast night. I'm catching up with your space man week, Pappy; thanks for the fun posts.

Ryan, I can't explain that statement beyond what Fred Hembeck said.

I am fascinated by the descriptions on Wikipedia of Maneely using just light pencil indication and that his drawing was in the inking. That sounds like what I also heard about Tarzan artist Jesse Marsh.

Kirk, since both artists came up around the same time they may have been inspired by each other. Romita's art was certainly busier in the fifties with all those little pen lines, but in the early days he did his own inking, too.

7f7, I love spacemen, rocket ships and ray guns! They seemed to be short-lived in the early fifties. Stories about guys in space didn't seem to be as popular as other genres. I don't know why, unless it was what has been mentioned here before about westerns, war, pirate stories, etc., just being transferred to space. Despite the setting, they might have seemed too familiar to readers of the era.

It appears we didn't know much about Venus until radar analysis started in 1958, so the postulation that it was a desert and water had to be mined wasn't as odd back in 1953 as it seems to us now.
Thanks,
Darci

Darci, the cloud cover of Venus was a wide open invitation to writers to make Venus anything they wanted it to be. What a bummer the truth is, eh? Venus is an uninhabitable planet. So long to the notion of "Earth's Twin Sister"...