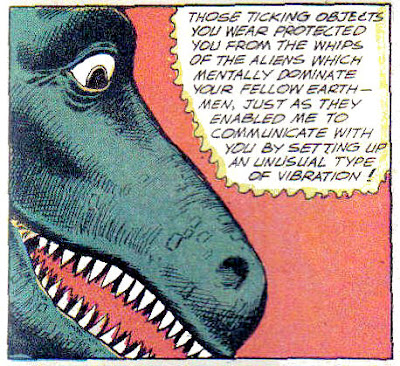 I read “The Invisible Dinosaur” in its first appearance in Strange Adventures #133 (1961). At the time I didn’t think there was anything unusual about this totally screwball story. Wristwatches that cause vibrations that negate the effects of aliens with whips who control humans. Intelligent dinosaurs, descended from Earth dinosaurs of 175 million years ago, captured for an interplanetary zoo. And said dinosaurs are invisible on Earth. I did not think any of that was extraordinary, nor did I question how something invisible could cast a shadow. My critical thinking skills were yet to develop, I guess.

In those days I was more interested in looking at the Murphy Anderson art. Murphy was one of my favorite artists from the Julius Schwartz editorial stable. What I see now when I look at this story is another immaculately drawn tale with an absurd plot, rendered completely straight-faced. I guess that came from Anderson’s time in the comic book trenches, drawing science fiction for Fiction House (Star Pirate), and later the Buck Rogers newspaper comic strip. He had such a solid, appealing art style, I might not have even noticed the Gardner Fox story was, well..spacey. 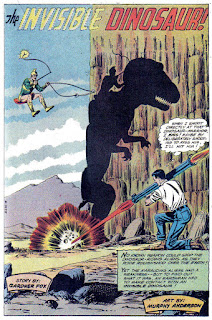 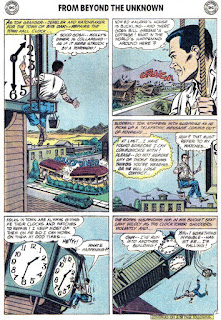 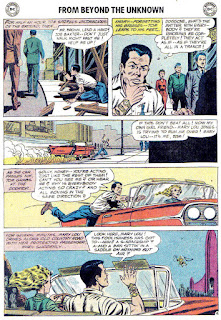 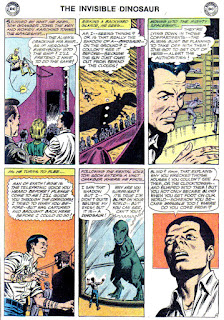 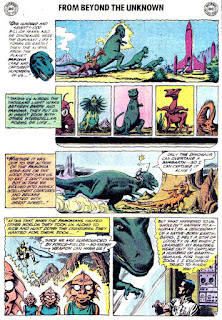 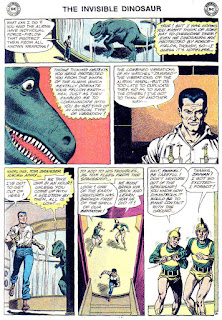 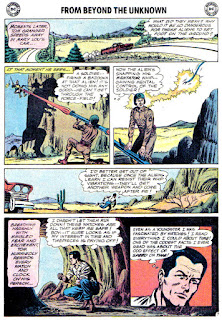 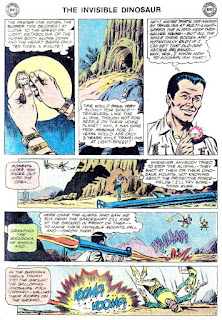 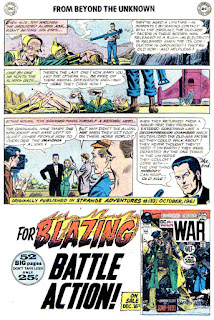 More of the visibly invisible from Murphy Anderson. Just click on the thumbnail: 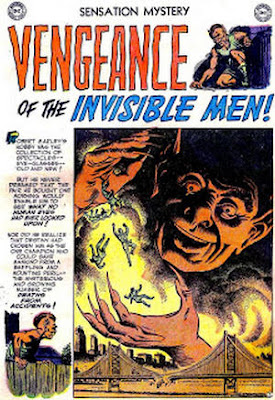 I too always liked it when Anderson pencilled as well as inked. The thing that I liked best about DC's John Carter was exactly that it brought a return of pure Anderson.

Yeah, the comic-book science here is especially wack. I suspect that Fox knew that he was just making it up as he went along, and didn't worry about it. I would have been more concerned about mis-educating the readers. (I started regularly reading this sort of comic book when I was about six years old, so there was ample opportunity to be misinformed.)

One common device here is that of the hero who is someone technically skilled but without a formal education in science, effecting a scientific triumph; that device appeals to readers who'd like to believe that they can wing their way to such success. Granted that plausibility were otherwise thrown out the window, but it would be more plausible were Tom Granger a physicist who made a hobby of clock and watch repair. (One of the things that, in the first part of the 20th Century, distinguished American physicists from their European counterparts was exactly that the typical American physicist could do his own car work!)

I believe that a bet were missed in not having Granger later reünited with the dinosaurs, in further heroïc adventures. Mary Lou could have tagged along. (“Not on your life, Tom Granger! I'm coming too!”)

But, the real question is that of the missing gorilla.

Even if you hadn't played up Anderson in your intro, Pap, I would have been impressed by that great splash panel. Really terrific art, as always, from that guy. Regarding the story, well, when you write over 4,000 comics stories, like Fox did, you're bound to have some clunkers. But he's still one of my favorite four-color scribes because of how prolific he was and for his hand in the creation of both the Golden and Silver Ages of DC Comics; I even once wrote an article on him for Suite101. He was heavily into mythology and fantasy, being a big fan of the Barsoom series, so stories like today's are sure to be "out there." Did you know Fox even used female pen names sometimes? That's a dude who could think outside the box.

Crytical thnking? Well, if I believe that Dracula doesn't cast a shadow, I guess I can believe those invisible Dinos CAN cast one.
Cool, COOL story, Mr. Pappy. Now I understand better the dinosaur craze of the 80's and I bet Xenozoic Tales owes something to this one.
The guy was crazy for wristwatches.... I dropped mine when I got my first cellphone.
I've always been crazy for Dinos. Turok was one of my first comics, and so fondly remembered....

The spell of the mentator! Invisible, telepathic T-Rex dinosaurs! The old-age factor! Now that's a comic book! (Although a volcano on the side or a few man-killing robots would not have been out of place, but, oh, well.)
Back when I was a lad in the '60s, my older brother got tired of buying DC comics after he found the Marvel brand. So I read comparatively few DCs. What stories I missed —but, thanks to Pappy, I catch up a little. DC certainly had some good artists.
I miss out on most comics of today, too. Somehow, from what modest amount I've read, it seems that the kind of story writing here and in the other, linked Murphy Anderson-illustrated story, the modern versions don't have the same level or flavor of wackiness. But they can make up for it in slickness, I reckon.

LOL they donim8ed tha Earth till hundreds of em got stolen by aliens LOL omg I think my sis Deb wrote this wen she was drunmk yo LOLEREST! If aliens steel hundreds of humens that'll leave this planet 4 tha mice yo

That's why Golden Age fantasy writers are so cool, they were BORN drunk.

The most bizarre thing about this story is that the writer is clearly intelligent (unlike certain persons with the literacy skills of a well-trained horse and the IQ of mud who have been showing up in the comments recently and posting totally irrelevant links to what might be either a virus or child porn - has anybody actually been stupid enough to look?); the specific figures he gives indicate that he knows a person traveling at 99% of the speed of light will age at one-seventh the usual rate, and although he doesn't bother to explain it, he knows that a completely invisible creature would be blind because you need opaque retinas to trap incoming photons.

And yet the whole story makes absolutely no sense whatsoever! The fact that the kindly exposition character is an invisible sapient telepathic T Rex is totally beside the point. Dinosaurs could be omitted from the story altogether without really changing anything, and there's no reason whatsoever why the dinosaurs are invisible! Since their riders are not invisible, there's never any suggestion that the aliens want to be the least bit stealthy, and rendering your mount blind would seem to be a bad idea, presumably it's not deliberate, it's just a random thing that occurs for unexplained reasons on some planets (the artwork is inconsistent about this).

And the hero triumphs because he just happens to be the world's laziest clock repairman, and is therefore wearing so many watches he can't be bothered to repair (yet people still give them to him on the off-chance that he'll actually do his job) that his arms aren't long enough to accommodate the watches dangling from his chest! Why? Because watches and Einstein's Theory of Relativity both have something to do with time, therefore any kind of clock is kryptonite for people who travel faster than light (except for the great big one the invisible blind dinosaur knocks over by mistake at the start of the story).

This is sheer Surrealism! I suspect the writer had a small child in the room with him and asked them "What happens next?", and just went with it. Then again, he may have been inspired by Salvador Dalí's most famous painting, "The Persistence Of Memory", which prominently features watches, may be an allegorical representation of Relativity (Dalí himself denied this, but a lot of people didn't believe him), and makes no sense whatsoever because it's Surrealism. You decide. Not that it matters - this is one of the silliest comics I've ever read, and therefore tremendous fun on any level.

Oh, by the way, you really ought to ban that illiterate moron who is almost certainly trying to link your site to something profoundly undesirable.