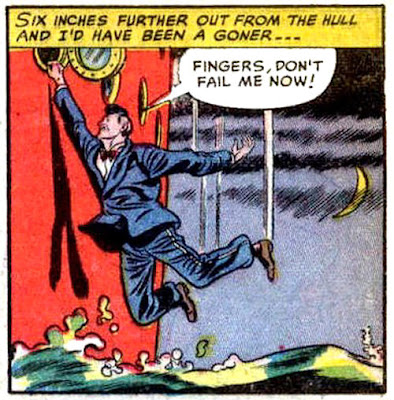 T-Man Pete Trask is a tough guy, with a tough job. He trails a known diamond smuggler even though the smuggler knows Trask is following him. Being “made” by bad guy Anton Wolak doesn’t matter to Pete. Being known to the smuggler gives Pete an excuse for a little hands-on action. He tells the smuggler, “Where did you get that black eye?” With a set-up like that, Wolak should have known Pete would deliver the punch-line — with a punch! — to that jokey question. Pete is a fine example of a government agent (“T-Man” stands for Treasury Man, you know), dogged in his pursuit, ready with his fists, and he can also crack wise when the mood strikes him, or in this case, when he strikes someone else.

The Grand Comics Database credits Harry Anderson for the sharp artwork, and Joe Millard for the script. “Musical Murder” is from T-Man #2 (1951): 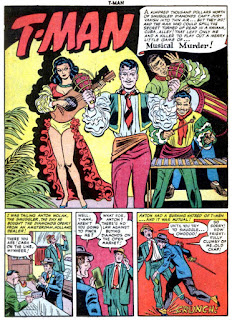 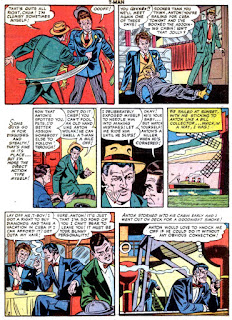 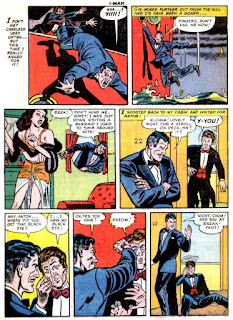 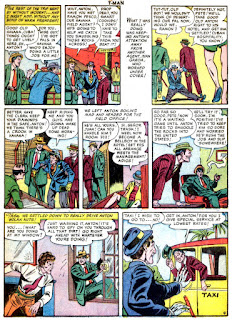 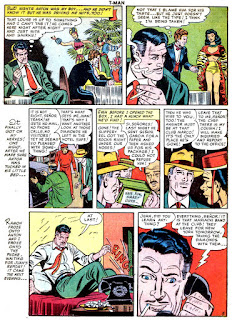 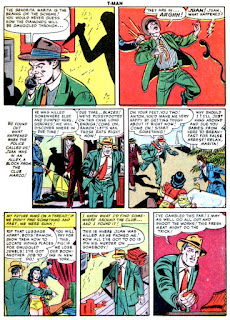 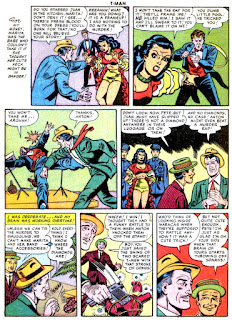 Lovely story, lovely character. I never read about a T-Man hero before.
These guys definitely deserve a comic book for the marvelous work they do.
He's brilliant, the way he battles with his opponent is... hollywood style .
"Anton would knock me off if he could"... and Anton knocks him OFF ! (but he manages to enter a nice lady's cabin... my kind of hero!).

By the way, we're in Cuba, one year before Batista, right?.... I heard they have re-opened the Embassy recently. Guess "happy days are here again" (for somebody).
I only hope Raul won't drop the Havana Club label (there's a legal dispute with those Bacardivampires), for their "nationalized" Ron is unbeatable...

I expected Pete to limp through the story, since Anton obviously crushed the bones of Pete's foot when it went "CRUNCH!" Or was that an out-of-place Wiley E. Coyote moment? Maybe not, since the story also includes "Fingers, don't fail me now!" and "Don't mind me, honey" as T-Man ogles the surprisingly scantily clad babe. Plus there's our hero's undignified scream ("YIIII!") as he's thrown overboard. I almost expected birds or stars instead of just circles over Anton's head when Pete knocked him down.

Not a good role model, that T-Man, almost always smoking. I laughed when he mentioned going out for a "goodnight smoke!"

Why was their fresh meat just lying around conveniently for T-Man to grab up?

Silly stuff, but breezy and fun. Just don't be surprised if I've forgotten it by next week.

There's a screwy dynamic here about when the protagonist goes-by-the-book, when he throws a punch 'cause he feels like it, when he tries to be sneaky and subtle, and when he just bulldozes his way to a solution.

As for the antagonist; had he not stabbed Juan, he could have moved the diamonds to some other hiding place. Without the murder, the protagonist would have waited until the macaras were entering the United States until smashing them open, and the diamonds could have meanwhile been slipt through customs.

Speaking of Juan, he represents something that we see to this day in popular fiction — the ally who is treated by the writer as more expendable, because he is not of the same nationality or ethnic group as most of the audience.

There's some trouble with the blood here. Juan's blood appears still shiny and wet when found. And Marita doesn't seem to understand that, even if the place is serving Texas Chainsaw barbecue, the blood from that meat is unlikely to match that of Juan.

BTW, as an economist, I find it impossible to work-up any antipathy towards those attempting to evade import taxes.

Daniel, the story obeys that tradition of action first, think later. You know, like 99.9% of the action movies made today.

I agree with the use of minorities as expendables. I was made aware in the early '70s when I saw examples of African "natives" in Tarzan films being the first to die when a whole safari party is captured.

Ryan, forgotten by next week? How about me, who read it two months ago?

Pete is no intellectual. He is a man who lives by his fists. Pow! Problem over, case solved!

J D, and we can't even cheer the eventual return of Cuban cigars to America. Now smoking is a no-no (people who smoke cigars may think they are cool, but unless they issue me a gas mask if they are smoking within range of my nose I will think they are just jerks).

My sister has been to Cuba twice (she's Spanish-fluent) and loves the place. She's very sympathetic to the people and even isn't anti-Castro (whatever that means); she once brought me back a Spanish-language, pro-Castro's revolution comic in something of an old EC style. I'm sure she'll go again, especially if the U.S. starts allowing it from here.

@Ryan, despite the critical conditions of their economy during the trade ban, Cuba had great comic artists and cartoonists. This is one of the funniest and most well crafted cartoons I ever saw. "Vampiros en La Habana":

You can watch it with your sister. Being Italian, I didn't have many problems of comprehension. Watching it, let's say, 100 times is also a great way to learn spanish. :-)))