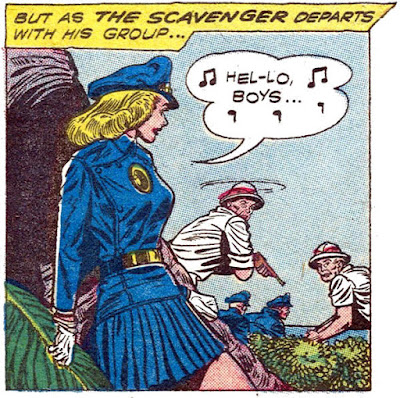 Second in our theme week, Favorite Females, is Lady Blackhawk. This is the second appearance of Zinda, who dresses up in a female version of the Blackhawk uniform, and longs to be a full-fledged member of the Blackhawk team.

Well, I would think so. After all, Zinda, described on page two as a “young secretary” can afford a jet plane (and by extension fuel and hangar facilities), with which to track down the missing Blackhawk team. I have not read the first Lady Blackhawk story, but unless she is working for fun because she is an heiress with millions of dollars to use as disposable income, if I were her boss I would closely examine my books. Maybe Zinda is siphoning money to pay for her desire to be one of the team.

And even in the last panel, despite the big smile on her face, she is disappointed. Look at what Blackhawk says, then imagine what is swirling through Zinda’s head as those sexist and condescending words come out of his mouth. I’ll bet she can just picture herself making a swift and deadly kick to Blackhawk’s you-know-whats. 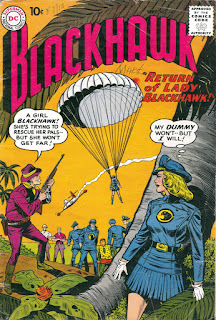 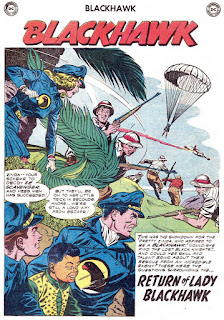 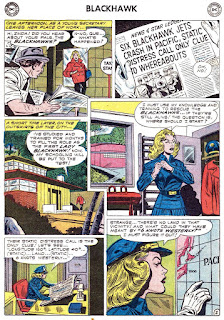 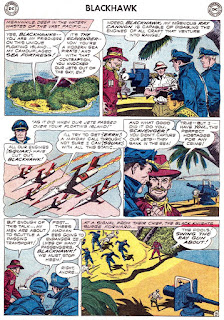 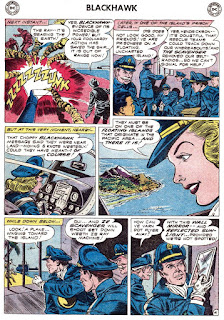 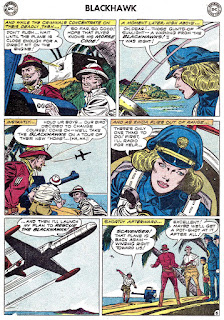 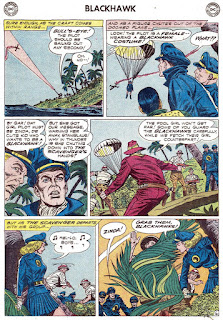 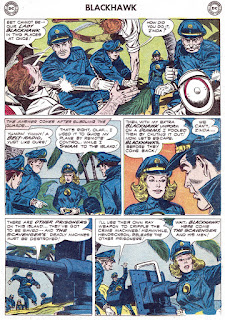 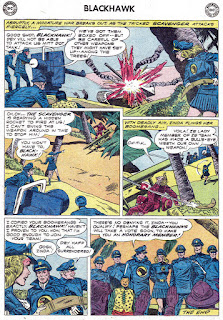 1) Airplanes or not, I bet many young secretaries ARE wealthy, if they look like Zinda.
2) Sexist remarks are not the worst of the stereotypes here. I mean... just look at Chop-Chop.
3) The Hawks. Looking at their uniforms... well sometimes I can't help thinking about the Village People... or Frankie Goes to Hollywood maybe. So I guess a honorary membership ("perhaps"...) is more or less the only award Zinda can get from such a bunch.

It is impolite to question where a woman obtains financial resources. (Or, at least, it was back then).

Here's my desperate attempt at a theory. Qua heiress, Zinda had almost enough money as an heiress for all that she needed in her quest to be a Blackhawk; almost, but not quite. And the secretarial job put her over the top.

Meanwhile, Hendrickson refers to “a floating, uncharted island”, to distinguish it from the case of a charted floating island, and from that of an unfloating uncharted island; 'cause these distinctions are important.

I wasn't sure, however, how to distinguish a floating, uncharted island from a ship made to look like an island. Then Zinda referred to multiple floating islands, originating in the Pacific Area. Apparently, my ignorance of physical geography and geophysics is worse than I thought.

Yeah, Zinda's an “honorary” member. We have to hope that this is not like the “honorary” degrees awarded to celebrities when they agree to yammer at the commencement ceremonies of colleges and of universities. But it's really hard to see the honor in being a Blackhawk of some other stature than that given to any other Blackhawk.

(BTW, elsewhere I recently provided a link to your Lady Danger entries, to show at least one golden-age exception to the wretchedly sexist depiction of women in comic books. Thank you for that resource!)

Kenn, Zinda might have had a rich, married lover, someone the Comics Code would not allow to be seen!

J D, Chop-Chop is a character I have stopped "seeing." He is like Ebony to me. Despite how egregious they are, after years of reading comics I have gotten used to these two stereotypes and pass over them when I see them. Were I Chinese or African-American I would certainly notice them. So thanks for bringing it up.

After a makeover (maybe complaints from members of the Chinese-American community) Chop-Chop was at least made to look human, rather than the hideous buffoon he was in the 1940s.

Blackhawk uniforms make them look like Nazis to me, although they would have been right at home in any leather bar.

Daniel, Lady Danger! I have forgotten these long-ago posts. Thanks for reminding me. After reading your note I went to my files to find the tear sheets I used for the scans and can't find them. These are stories I would like to do over, but maybe they are on that uncharted floating island. Or at least the uncharted, floating boxes of much of my collection in my basement storage.

I read the first LADY BLACKHAWK tale long ago, and I think it was much more sexist. The heroine gives away her position to villains when she gets scared-- by a mouse!

By the 1960s Chop-Chop looked pretty normal, though I suppose the name was still objectionable, even as a nickname. I dimly remember some later Blackhawk comic attempting to rename the character "Chopper."

Looking forward to more posts with this theme.

Hi Pappy,
I could have sworn you'd posted this story previously?

I performed a search for all the Blakes at dcuguide.com. Here's the list:
Adam [Stuart]
Amanda (Waller)
Anna
Atom
Bonnie Denton
Dennis
Johnny
Mitchell
Thomas
I wonder if any of them are related to Zinda?

BTW, I can't find a match for "Zinda" in any names directory. They suggest alternatives like Zenda ("life", Persian), Zinaida ("God-like", Russian), Zendaya ("to give thanks", African), or Zanthe ("golden", Greek).
Thanks,
Darci

Darci, you have done your homework. Where else would I learn how much an F94 Starfire cost in 1951? Thank you.

I haven't posted the story before. I just found the issue of Blackhawk in a bargain bin at a local antiques mall earlier this year. So far I have been able to scan all of the Lady Blackhawk postings from my own comic books, not use scans from others.

I think "Zinda" is a pretty good name for a comic book character, but I would not give it to a child. My first name is not on any list of names, and I have had trouble all my life. As I once told my mother, "You have doomed me to have to spell my name every time I introduce myself."