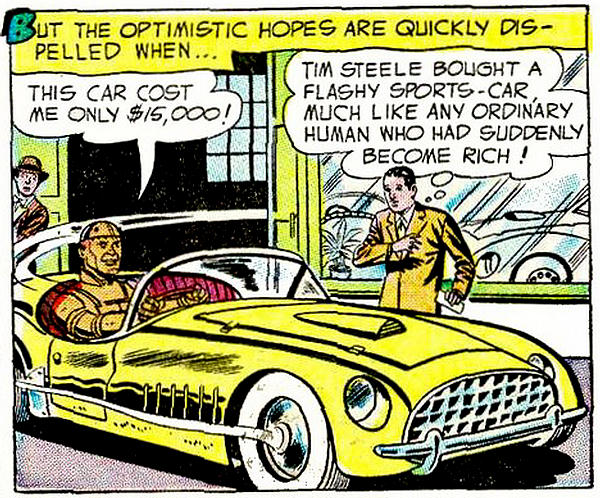 The final entry in our theme week, Strange Robot Adventures, is a 12-page story split across two issues, numbers 53 and 54 (1955), in 6-page chapters. The robot in this tale is a crook.

It is written by Otto Binder (who created the sentient robot pulp character, Adam Link, and was chief scripter for Captain Marvel for many years), so in the robot we have an interesting character, at least. In my opinion this reads like a Captain Marvel story without Captain Marvel and without the whimsy that character represented. That isn’t to say there isn’t satire; at second glance it appears to be a jab at greed, wealth and materialism. And the message to me in the robot Tim Steele’s “scorn for money” is an attack on The American Way of Life! You can draw your own conclusions.

The first episode, “The Millionaire Robot,” is from the last pre-Comics Code issue of Strange Adventures, and the second is from the first Code-approved issue. It doesn’t seem to make much difference. There does not seem to be anything in the earlier tale that would be blocked by the heavy hand of the censor.

According to the Grand Comics Database the art is by Henry Sharp and Joe Giella. 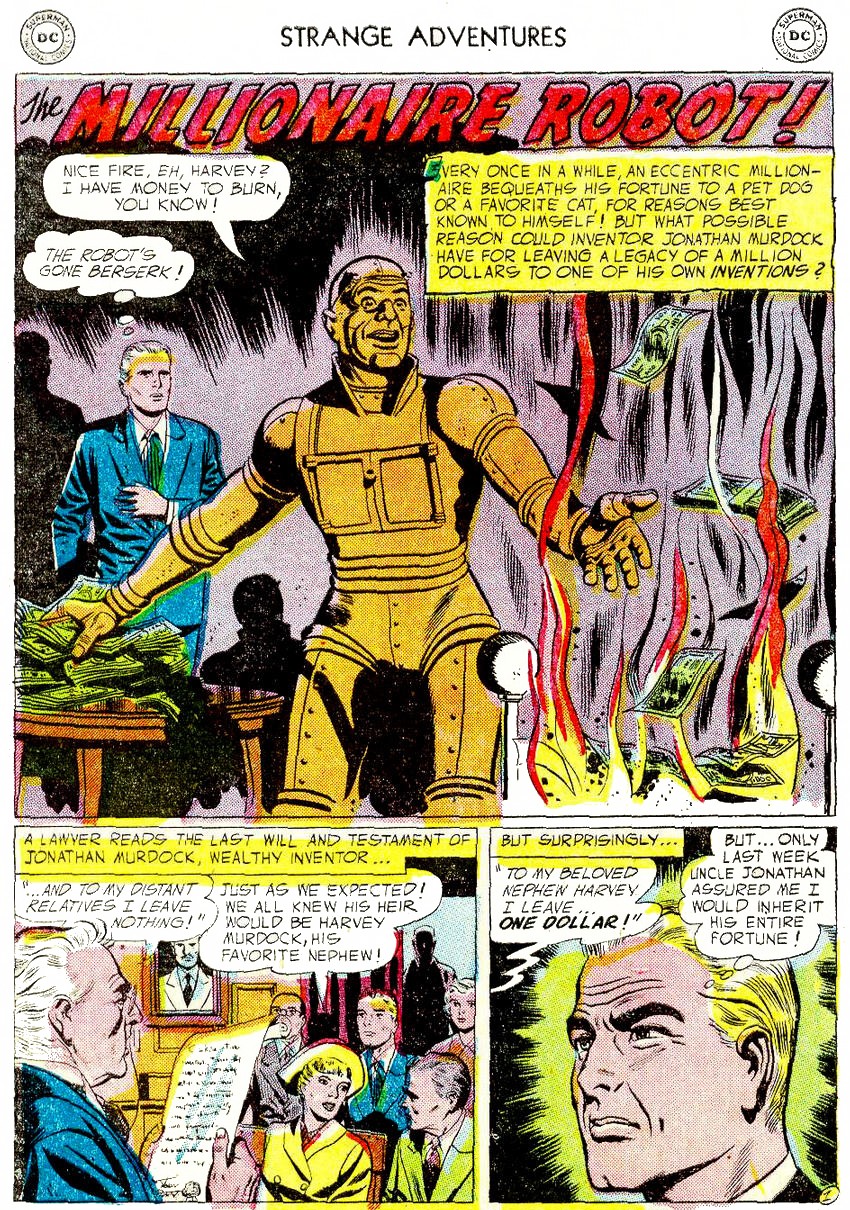 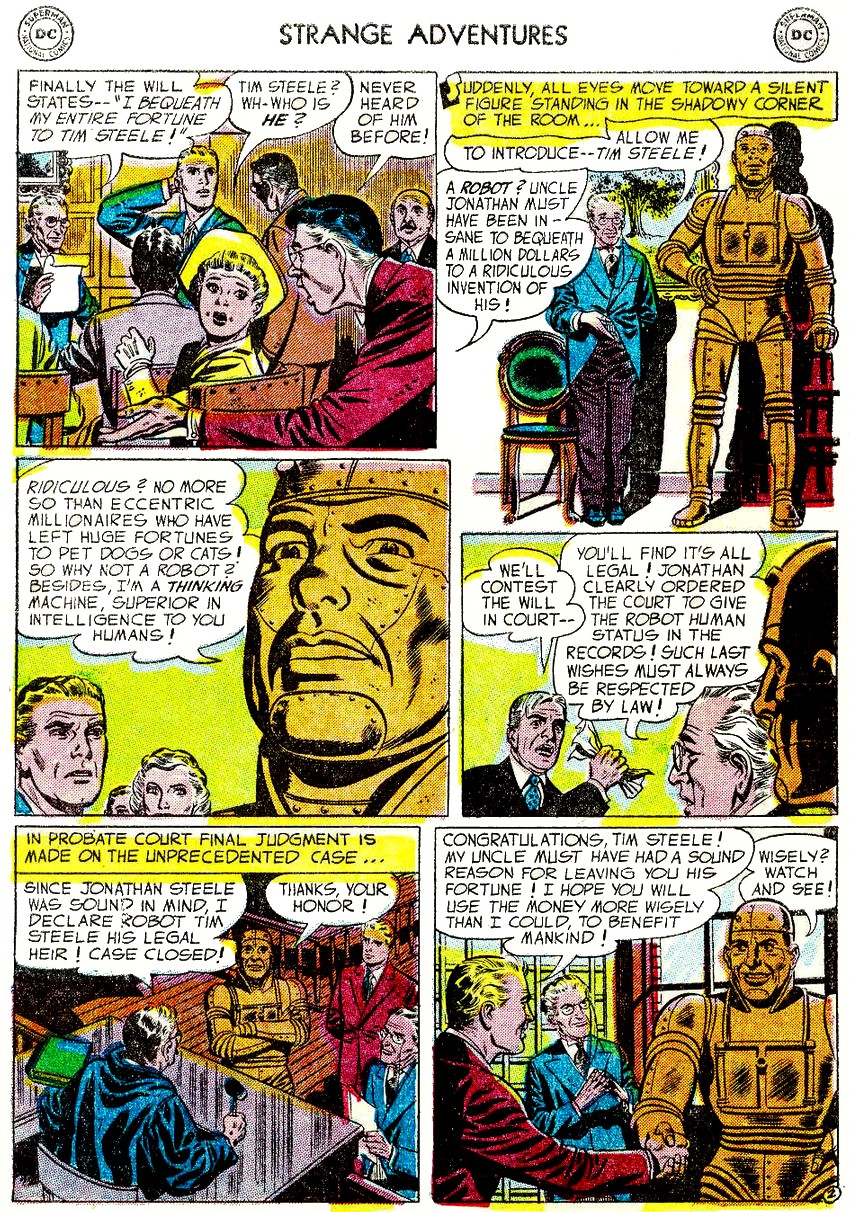 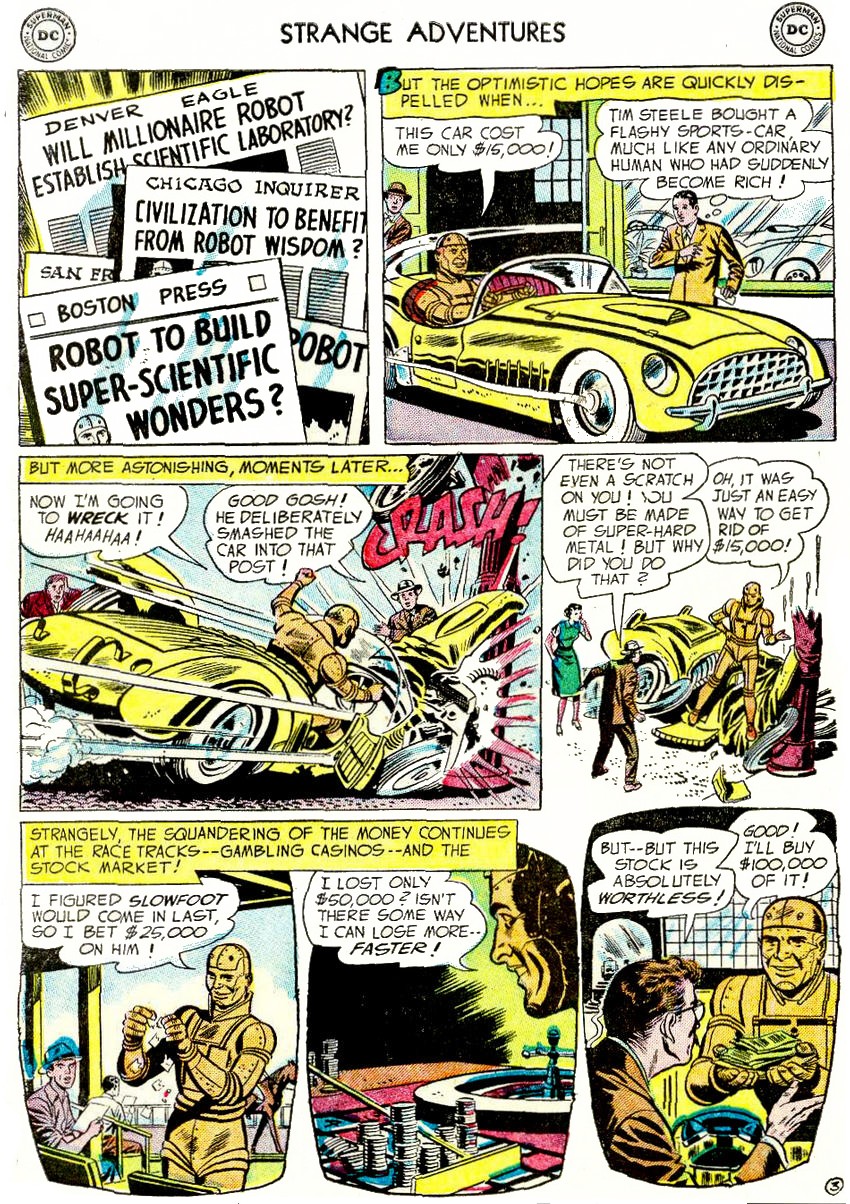 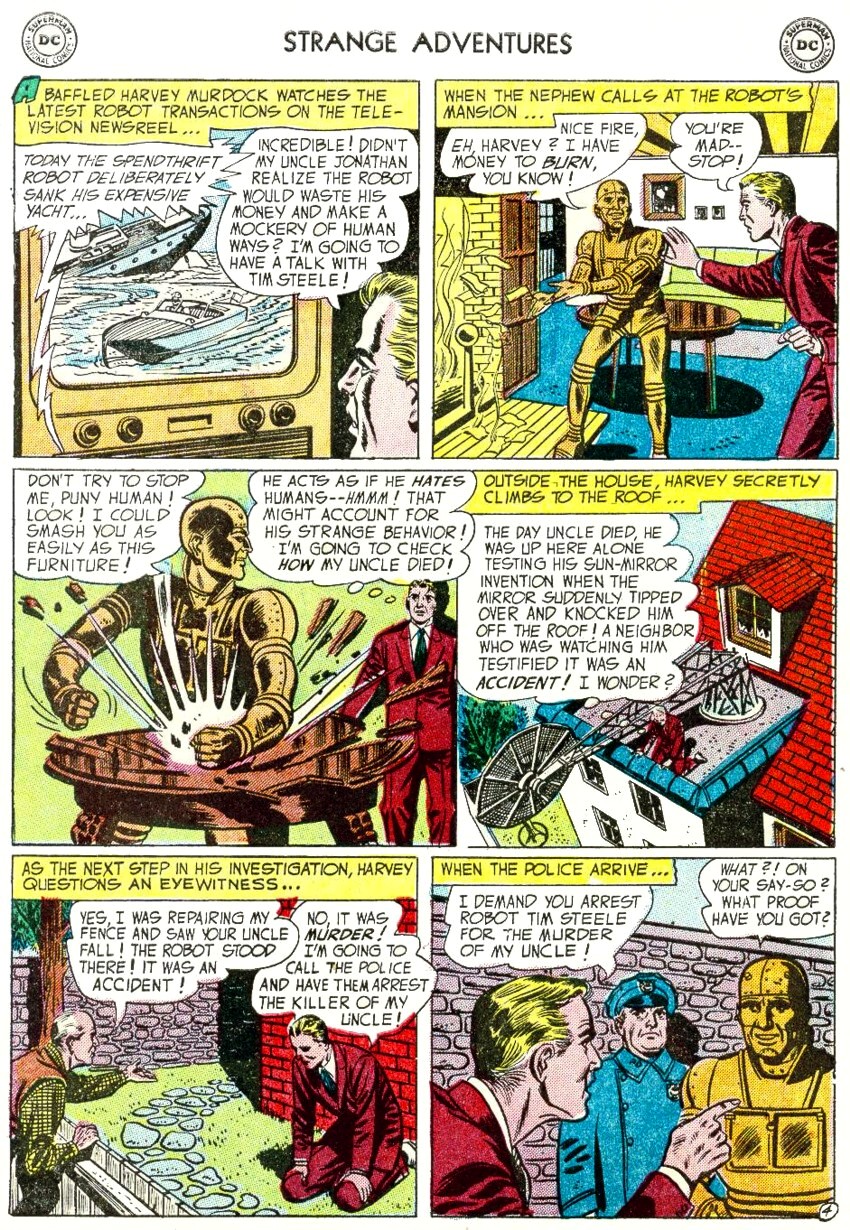 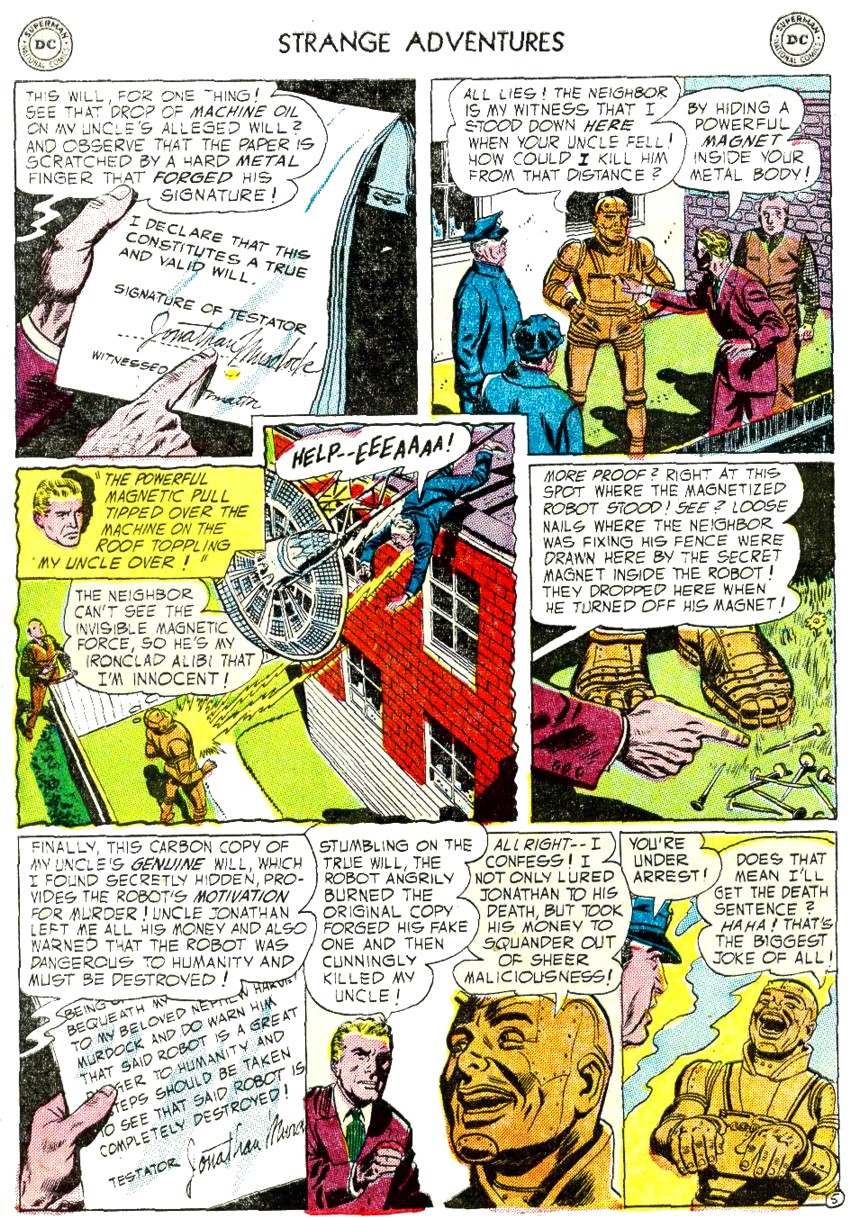 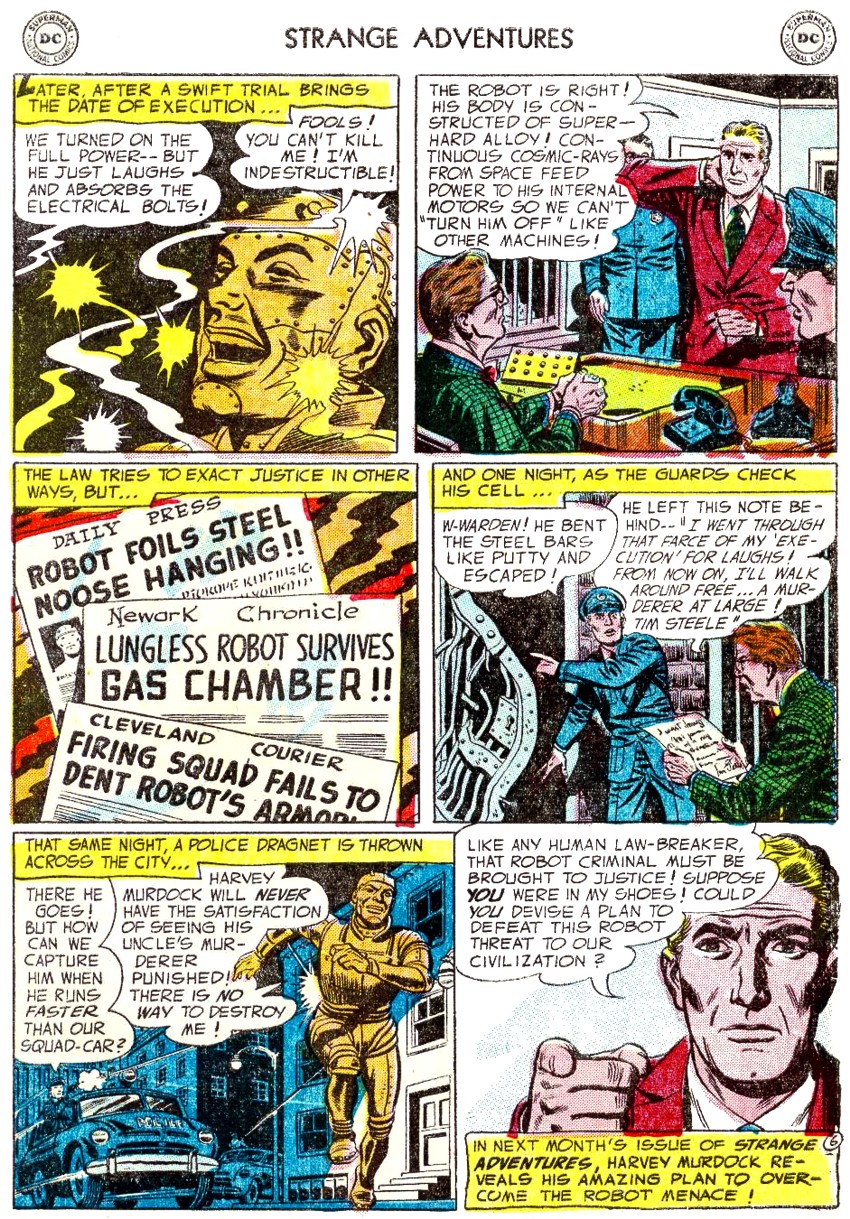 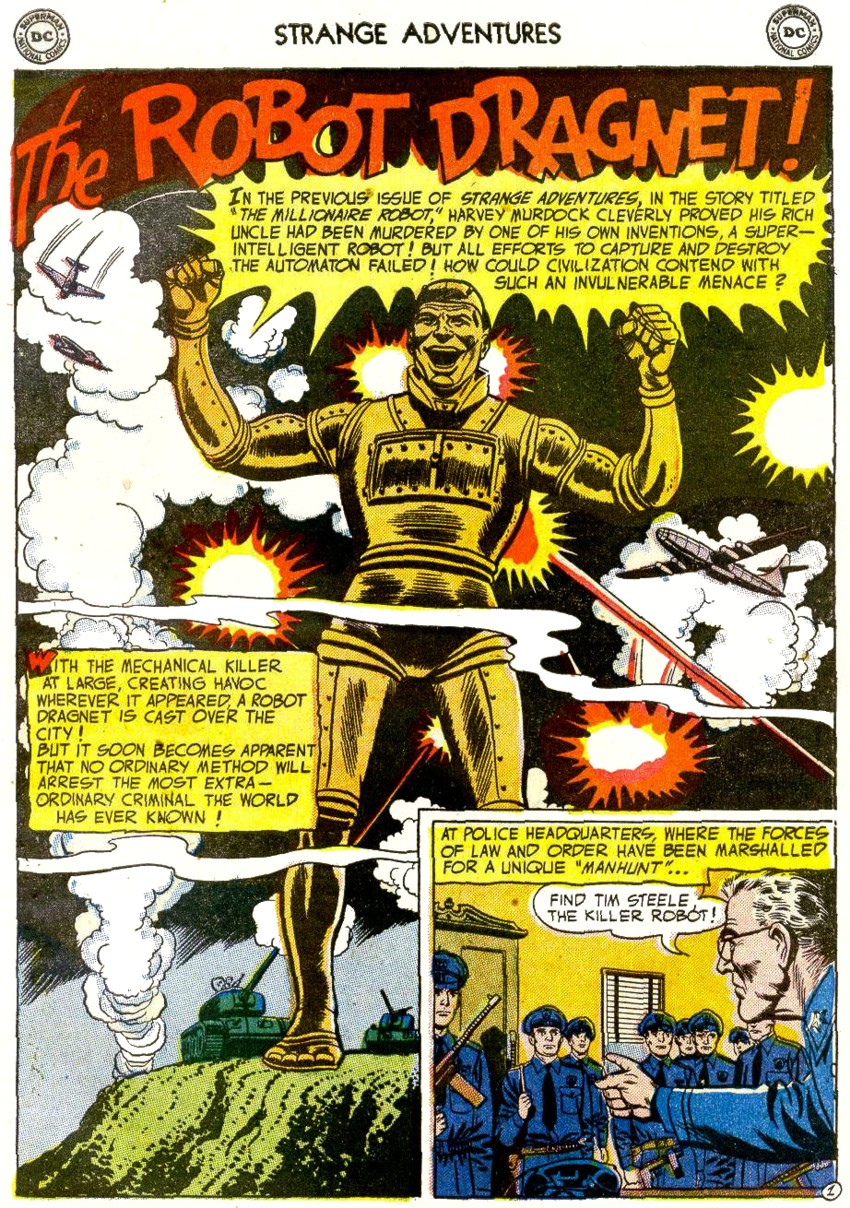 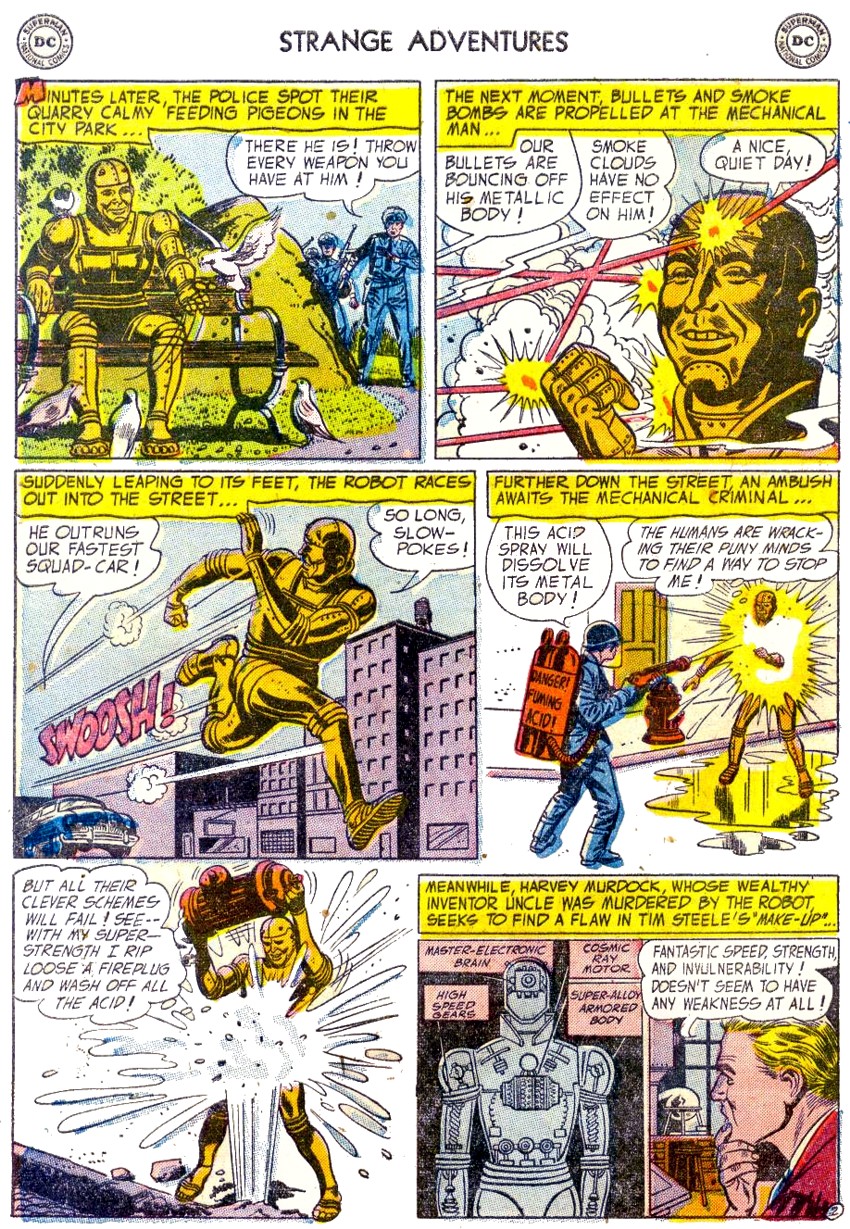 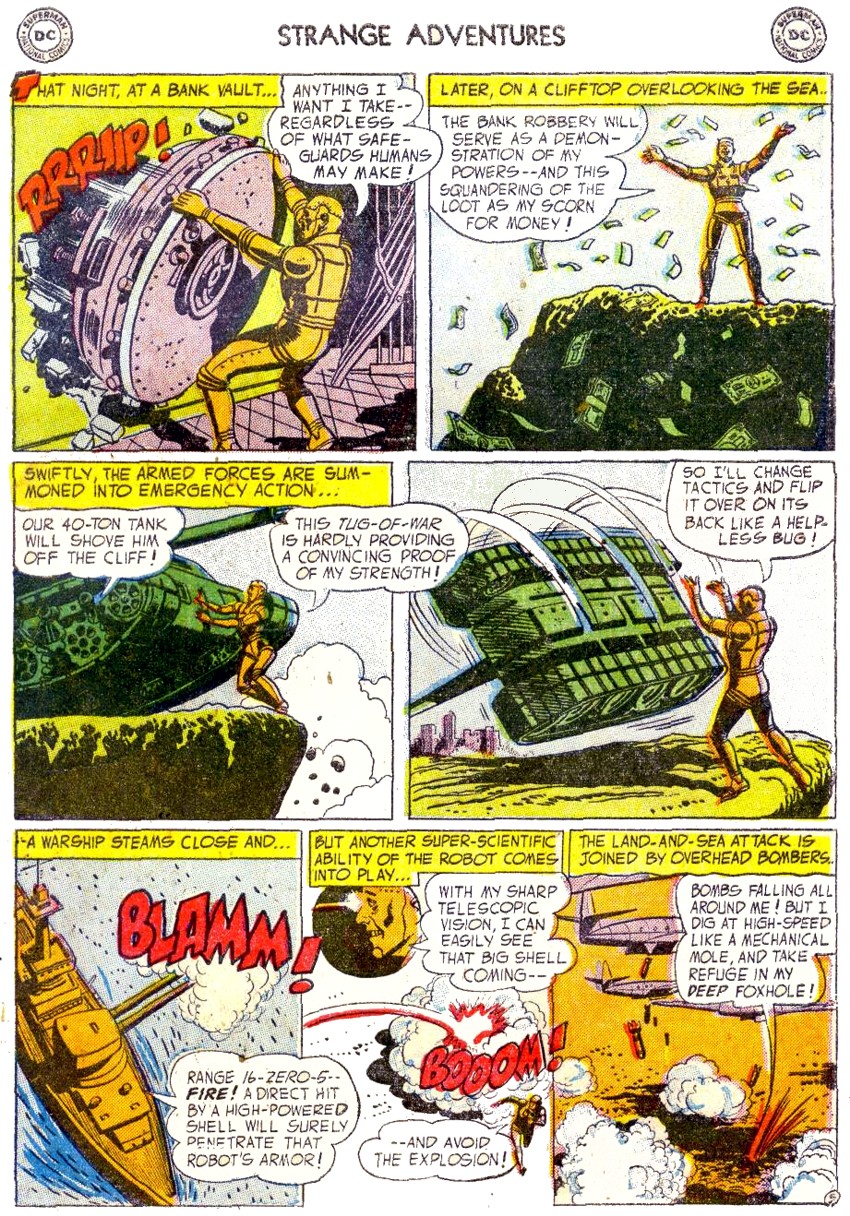 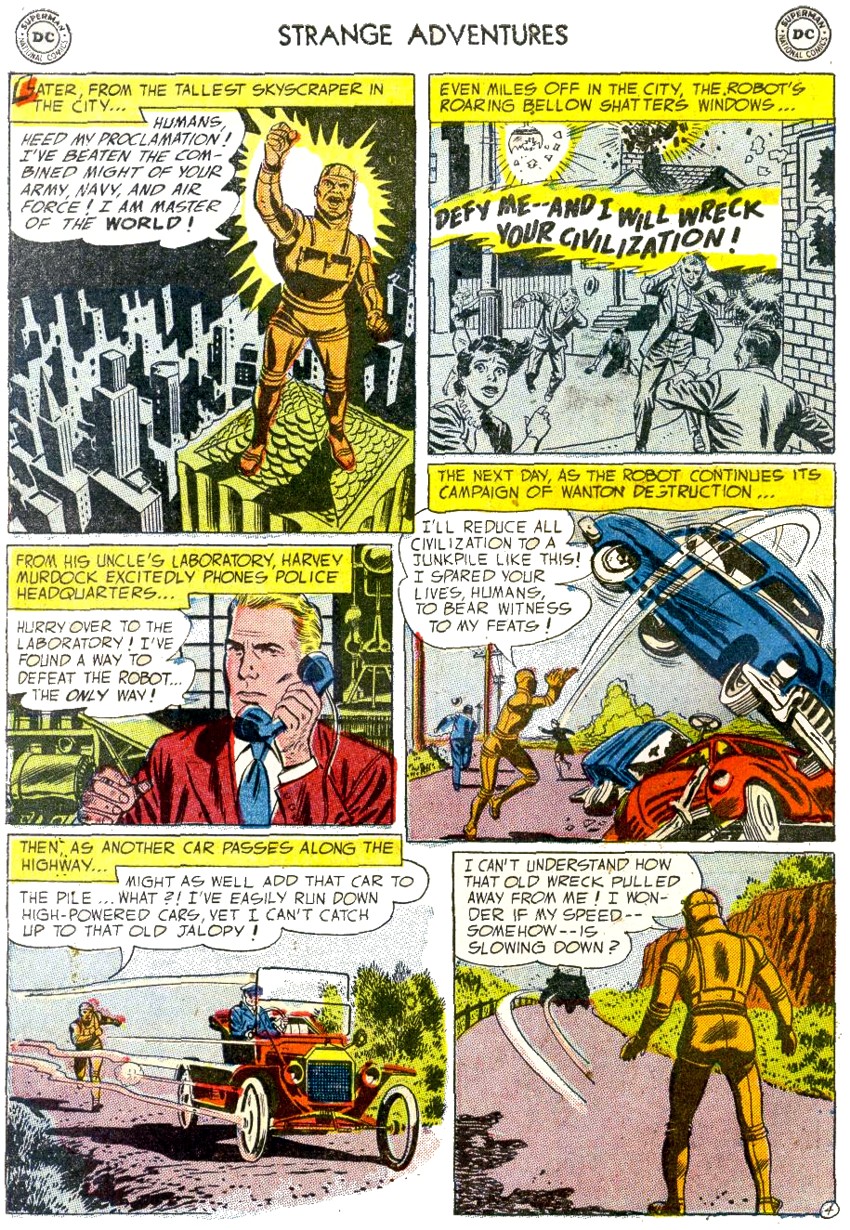 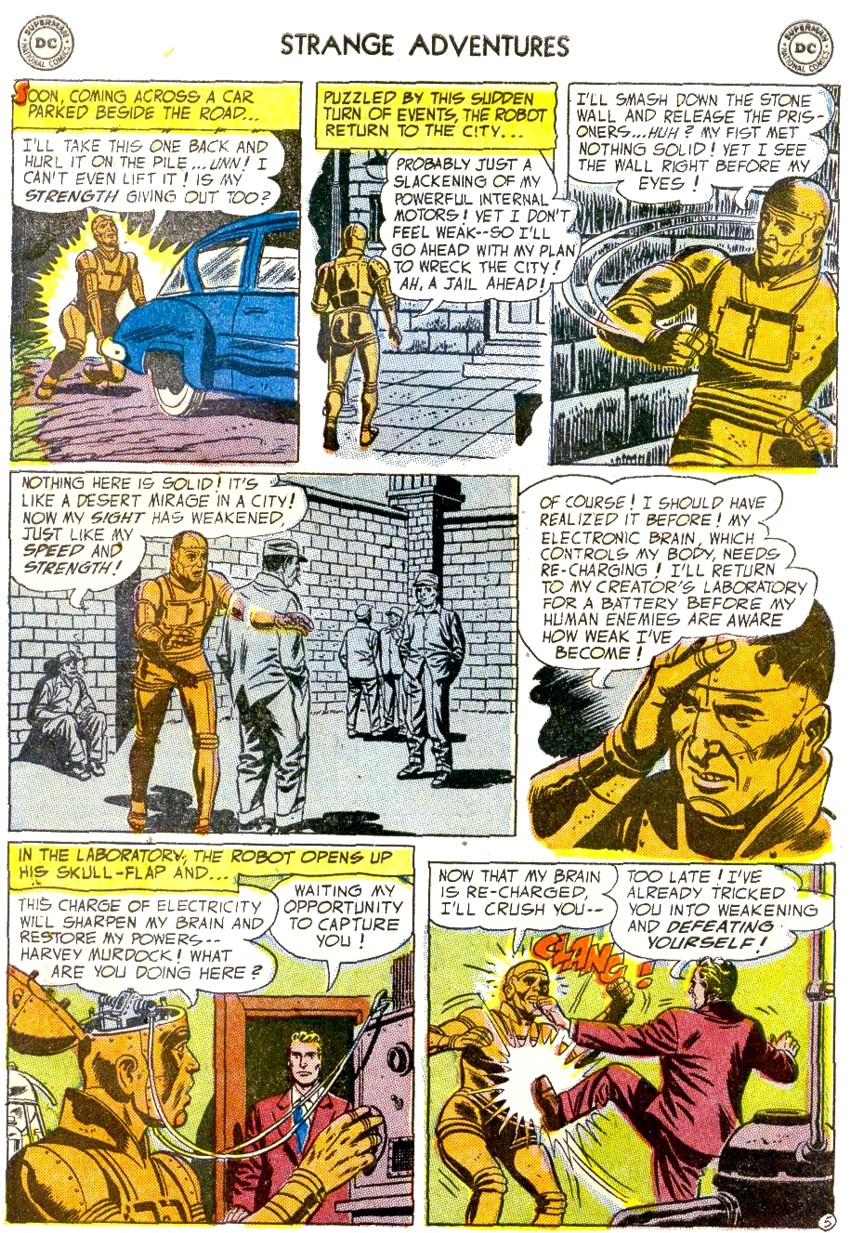 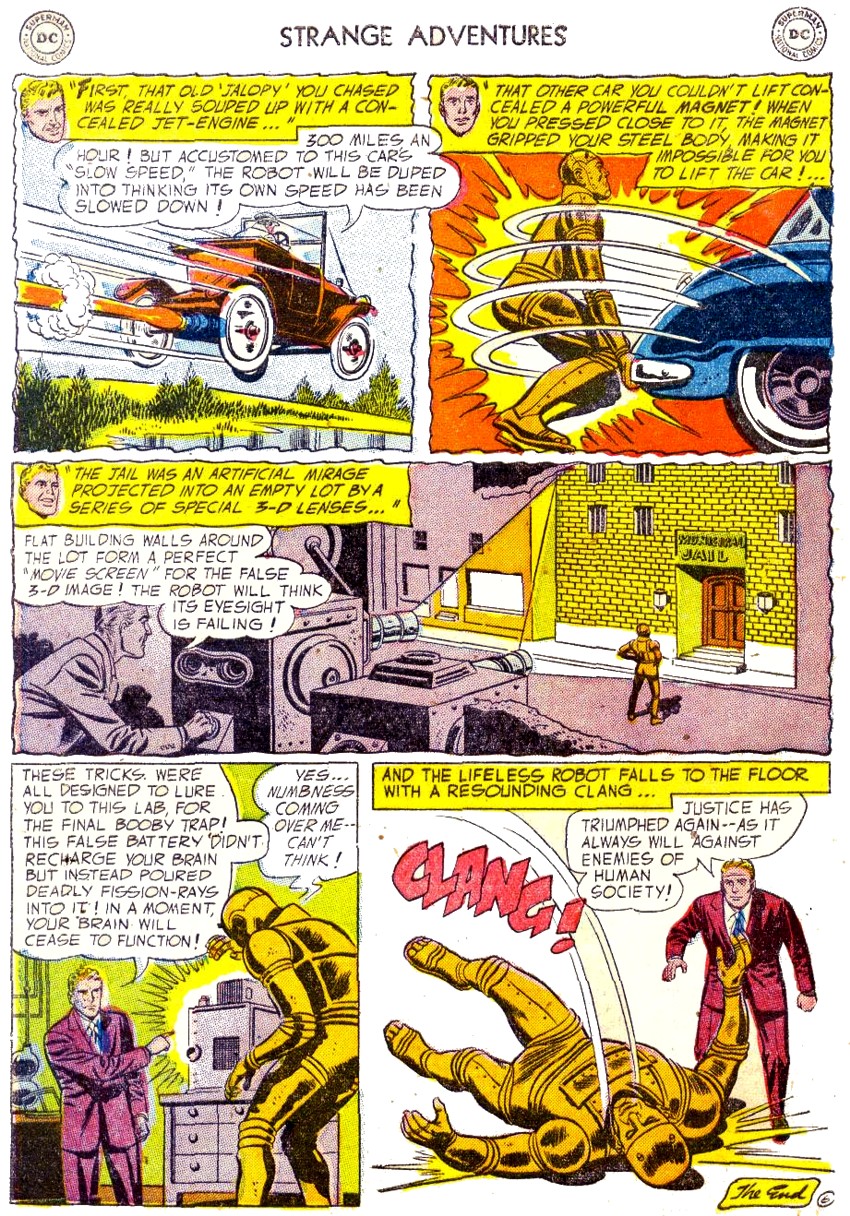 Here is a two-part story of the Black Rider, where the first part is pre-Code and the second part produced under the Comics Code with perceptible differences. Just click on the thumbnail. 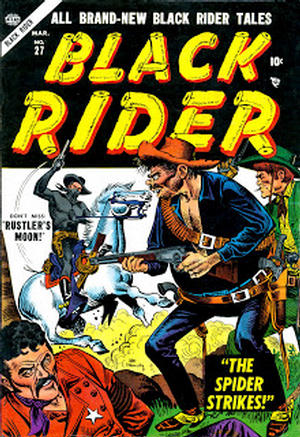 So, Tim's cousin, Cliff Steele, felt compelled to make up for the villain's deeds by becoming a hero as Robotman!
The ending seemed a little sudden, but otherwise a really cool yarn. I thought it was cute that Tim had metal toes.

Quite original. The robot (I'd say he's more an "android", looking at his face) doesn't want to "conquer the world" or something, he's just a screwball with a nihilist attitude who acts "through sheer maliciousness".
Funny story! Page three reminded me of the Carl Barks tale about Donald Duck hired to spend Scrooge's money in pointless and destructive ways (and by the way Jonathan Murdock beats Gyro Gearloose in "screwy inventions").
I read it and thought of Barks! Strange connections in comics, but maybe it's just me.

Aside from your appropriate remarks on Comics Code, "Black rider" is interesting:
Looks like Clark Kent goes west, and Eli Wallach meets E.C. horror to generate "the spider". Page 2 is very Leone - style 9 years before "A fistful of dollars"!

It seems that the authorities would occasionally just let Tim out of their sight, and then have to find him again.

Destroying money has the opposite effect of printing money; that is to say that, after some money is destroyed, the remainder has more purchasing power. That's not necessarily a good thing; one wants the purchasing power of money to be stable, so that economic calculations with it are meaningful. But one cannot imagine that Uncle Jonathan Murdoch had enough to make a noticeable difference (Uncle Scrooge McDuck is another story!), nor that Tim was thinking about the effects of deflation.

(BtW, since I have too much adrenaline and have had too little sleep, I will note that the Keynesian theory of the multiplier would suggest that Tim's wholesale destruction of goods would play a small rôle in boosting the over-all economy (much as Paul Krugman argued that the 2011 'quake and tsunmai would help Japan out of its long recession). Make of that what you will.)

Wow, Henry Sharp! I loved his brief contributions to the Ziff-Davis line of comics and pulps. His comical style makes me grin every time I see it. His GI JOE commie-bashing stories were the best! He went on to teevee's WILD, WILD WEST as creator (I think) and made the big bucks.

What a swell, invulnerable robot —and anthropomorphic as all get-out, a real wiseacre. He sure knew how to have fun. Fortunately, his intelligence wasn't set too high. Whew.

Thanks for the robot theme week, Pappy. It seems to be a RULE that, sure, you can make a robot to rake your yard, etc., but sooner or later, they will turn on you. I actually can't remember but I bet even the Jetsons had this trouble somewhere along the line. Stands to reason.

Mike, thanks for the history lesson on Henry Sharp. His name was unfamiliar to me, but it is obvious he was an accomplished comic artist. His Tim Steele-as-runner panel in the second story and his sports car and crash in story one caught my eye, especially.

I'll be on the lookout for more from this talented artist.

Went on to Wild, Wild West you say? One of my favorite sixties shows because I saw it as being very comic book-styled.

J D, I agree that parallels can be drawn between comics, even in widely divergent genres. As the robot story was a story of "reverse greed" it is only natural that we would think of the ultimate and greediest (or at least money-hoardingest) character of all, Barks' Scrooge McDuck.

Too bad Disney is taboo for blogging in the style I use; there are several Barks' stories I'd love to run, including the Donald Duck story you mentioned. Alas.

Daniel, I think it is interesting that both you and J D La Rue thought of Uncle Scrooge.

You are the Œconomist, Daniel, and I defer to your knowledge of cash and its effects due to supply.

In your opinion was Krugman right about the tsunami and Japan's economy? To my simple brain the fact that the government would have to pour billions into repairs and replacements, creating jobs, would have at least a short-term boost in the economy.

Haven't seen "Wild wild West" in ages! If I remember well (but I'm not sure), some frames of the show were regularly turned in actual drawings to form a sort of "comic book page". I wonder if those illustrations were drawn by Mr. Sharp.

Now that you mention it, J D, I think it has been at least 30 years since I saw the program. Did it come out after Batman, and is that why it used those panels in the opener?

P.S. I believe I was in the Army when the show originally aired, although I saw it occasionally when I was on leave. It was in syndication in the early '70s, when I watched it regularly.

7f7, the closest I could get was my coworker, who as soon as I left the room would stop doing his work, only to pick it up again at the same point when I returned. I accused him of being a robot who could stand immobile for 10 minutes or more until he detected the door opening.

In other words, if I hired him to rake my lawn I would have to be watching him or he would stand (and rust if it rained). That defeats my purpose, which would be to have a robot rake my lawn and dispose of the leaves while I watched TV, read a book or worked on my blog.

I was amused to see that JD had thought of McDuck. (I often think of McDuck when the dynamics of huge sum of money are under consideration.)

Productive resources were destroyed by the 'quake and tsunami, and the resources subsequently used to rebuild could (in the absence of the disaster) have been used for other things. By analogy, imagine first the flurry of obvious activity that follows the kicking of an ant mound, but then consider that the ants would have been less apparent yet still hard at it if the mound had been left unmolested. And when the state takes charge of rebuilding, it substitutes bureaucratic guess-work for market valuations in the allocation of resources; the market can access decentralized information (located in the minds of potential consumers and producers) unavailable to the state. The multiplier is well less than 1.

According to IMDB, the show ran from 1965 to 1969, Batman is 1 year after.
In Italy we saw it round 1977-79, when independent local televisions began their broadcasts. We suddenly had a load of fine old (cheap) 60's shows, like Batman, Star Trek, The Invaders, Garrison Commando, Land of the Giants etc. ...
The panels were used as a cut for the commercials, also, which is funny as we had no commercials inside the shows, so we had a double panel shot instead.