Number 1279: Back to yesterday 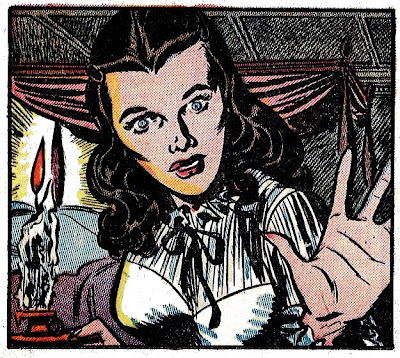 Leonard Starr had a great career, beginning in comic books, going into comic strips (“Mary Perkins On Stage;” after that strip's run he did a revival of “Annie”), wrote the Dargaud Editeur graphic novel series Kelly Green (drawn by Stan Drake), did advertising work, and even worked in animation (“Thundercats”). He retired in 2000 and to the best of my knowledge is still alive at age 86.

In the forties and fifties Starr did some memorable work for the American Comics Group, including the reincarnation-themed “Back to Yesterday” for Adventures Into the Unknown #4 (1949).

As a true illustrator, Starr moved between styles and techniques. For this story he used a Milton Caniff-style of inking, popular at the time, and still popular with me. 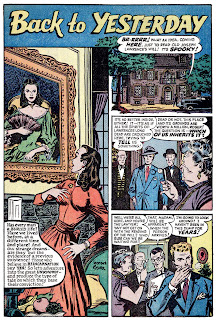 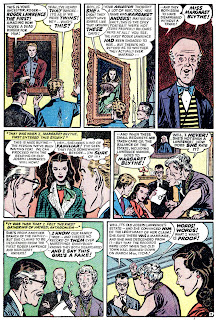 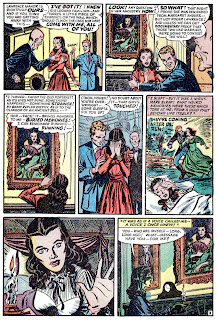 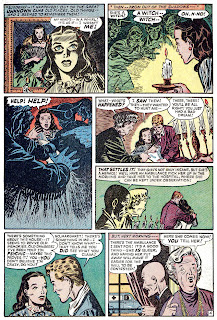 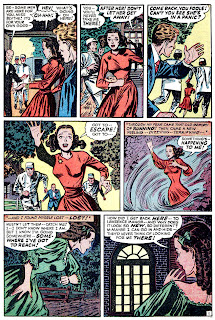 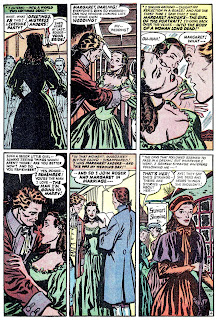 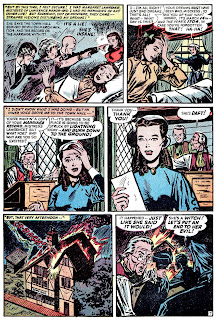 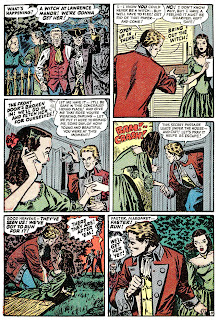 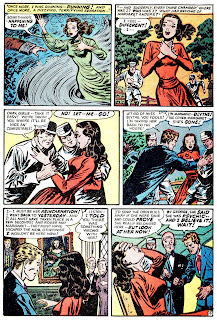 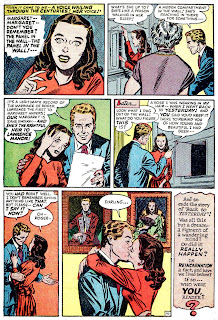 I normally frown on legacy strips, but I enjoyed Leonard Starr's version of Little Orphan Annie when it ran in my local paper in the 1980s. Nice to see another aspect of his career.

Kirk, I agree with you, and the reason is that while I read Harold Gray's Little Orphan Annie, I thought Gray's narrative plodding, which Starr's was not.

Starr's Annie was probably more the syndicate's response to the Broadway show, cashing in on that, than re-creating Gray's classic strip.

I do recall after Harold Gray died, the Trib hired Tex Blaisdell to take over Little Orphan Annie, and he had her tooling around in a VW bus with some hippie types - I guess they were trying a 180° turn away from Gray's conservatism - but Tex's tenure wasn't long and the Trib kept Annie alive in reruns throughout the '70s till they asked Starr to draw new strips. Starr mimicked Gray's style (the empty eyes, the shredded wheat crosshatching) while opening it up a bit.
This was about the same time Chester Gould retired from "Dick Tracy" and that strip had new life breathed into it with Rick Fletcher's art and Max Allan Collins's scripts.

Good memory, rnigma...I had totally spaced out Tex Blaisdell's time on LOA. It must not have impressed me much. I remember the Starr Annie revival because I clipped the first year or so of dailies and Sundays. Someday I'll mount an archaeological expedition into my basement and perhaps I'll unearth them along with everything else of interest I have tucked away in boxes left unopened for years.

I do remember the Rick Fletcher Dick Tracy, and still have a couple of paperback reprints of the Fletcher/Collins team-up.