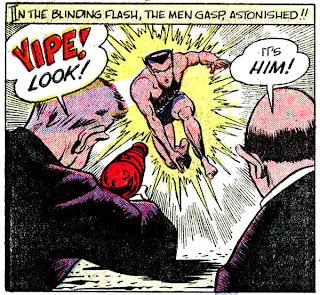 I liked that Sub-Mariner waged a war against humankind while simultaneously helping us. Makes for a very conflicted character, more interesting than many of the goody two-shoes superheroes of the era.

In this particular story a three-man group called the Fatalists is trying to peddle a death ray to various countries around the globe. No one wants it because it would be the end of the world. Since when has that stopped an aggressive nation? There are several right now who'd love to have such a weapon.

The story gets really unrealistic when the president of a country is ready to sacrifice his kidnapped son to the death ray rather than give in and buy it! And the kid doesn't hate his old man! Personally, if I were that kid I'd already be plotting to take over that miserable country, having Pop "deposed" by a coup and a firing squad. But that's just me.

In some ways I share some character traits with Sub-Mariner. Not that I hate everyone, mind you, but there are days when I think our planet would be better off without people. From Sub-Mariner #38, the last pre-Comics Code issue (1955), drawn by Bill Everett. 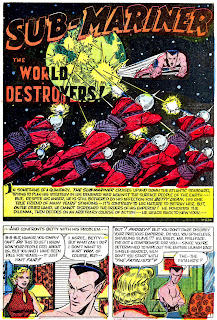 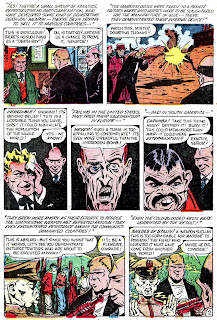 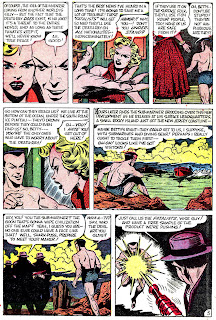 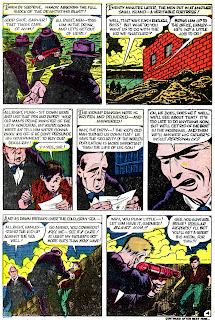 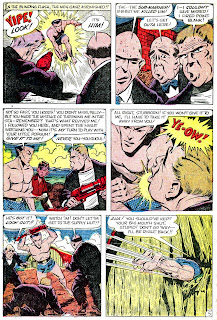 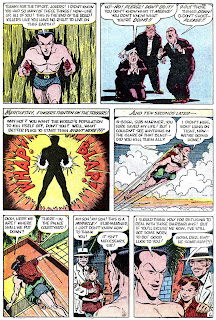 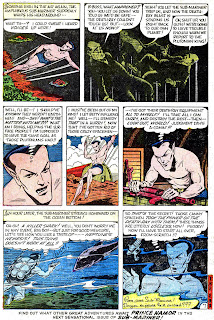 Ha Ha !! The Fatalists made the same mistake Aquaman's villains ALWAYS make with him: Throw his seemingly lifeless body into the sea, where his strength instantly revives!! Duh!! lol

Thanks for posting that great story.

Pappy, just so you know, I love-love-love the Sub-Mariner tales from the 1950's.

One great thing about Everett (other than his attractive women) is how, while there are some pretty racist characters, everybody is bizarre looking, so nothing really stands out! It's this great, cartoon-ish but at the same time realistic looking style that especially served him when he did monster stories.

His much more alien looking Namor is much better than the current, square-jawed version.

That said, I never got the death ray bit. We have those, it's called a gun! Has the same effect!

Page 5, panel 1 really needed an editor. I thought they shot him again, but on second read it's just him bursting in. Why do super heroes want to jump in front of ray guns?

I know the technology, whatever that technology may be, is different, but why exactly is this death ray considered more lethal than an ordinary machine gun? I see no evidence that it kills more people at one time than an automatic weapon, and certainly not moreso than a H-bomb!

That aside, this story, which I find entertaining mainly due to the Sub-Mariner's supervillian with a heart of gold personality, was a splendedly missed opportunity for some real hard-edged satire. Just think, the aliens want to destroy Earth not by using the weapon directly on us, but by giving the death-ray to us to use on each other. Bill Everett didn't want to go there for some reason.

Everett's art is always a treat. While I love the reproduction in the Atlas Era Heroes Masterworks, there's just something to be said about seeing the original pages.

The funny thing about Namor's attitude is that, even without the code, Everett would still have likely been forced to make Namor less anatagonistic towards humans, because there was talk at the time of a Sub-Mariner TV series.

100Aliases, I have heard rumblings of a sort about that long-ago plan for a Sub-Mariner TV show, but I don't know how it would have done. Sea Hunt was a hit, but remember the turkey, Man From Atlantis?

Gumba, other artists of the '40s sometimes exaggerated Namor's look even more. In an issue of Alter Ego during its fanzine/purple ditto days, Roy Thomas called the image of Namor from an issue of All Winners Comics featuring the All Winners Squad, as looking like he'd caught his head in a triangular cookie press.

Jim, what would superheroes do without really dumb villains, eh? Like, how come Sivana just didn't shoot Billy Batson rather than go to the trouble of gagging him so he couldn't yell "Shazam"? I guess it's because otherwise it would be a really short story!

Kirk, death ray sounds much sexier than guns or H-bombs, don't you think?

I think the aliens are smart, trying to hand us the weapon to destroy ourselves; they understand the human ability to commit mayhem on fellow humans.

Hi Pappy. God bless you for all of these magical posts. Treasures. I, too, have grown tired of way humans abuse and destroy all they touch. God would have been better served leaving animals in charge. Would have been a lot healthier for Earth. That is for sure. Cheers my friend. Keep up the wonderful work. Peace. STENDEK