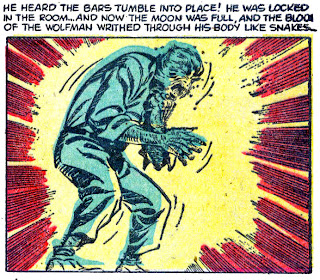 No, the headline doesn't have anything to do with an after-dark hobby of window-peeping, but of a werewolf, born of a traffic accident.

It's by one of the Atlas Comics greats, Syd Shores. I've shown this before, years ago, but decided it was worth re-scanning and re-posting.

It has off-register color printing, but after a lifetime of hating that part of the cheap-and-dirty production of comic books, I've come lately to think of bad printing as having a charm of its own. It means that comics were produced as throwaway items, more like advertising pamphlets than as the desirable collectibles we think of today. It shows that what is junk to one generation becomes a treasure in the future. If you'd been around in the '40s and '50s buying cheap stuff, like comics, and storing them away unread, your children today would be thanking you for your foresight. 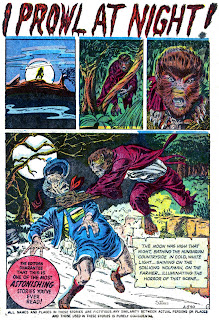 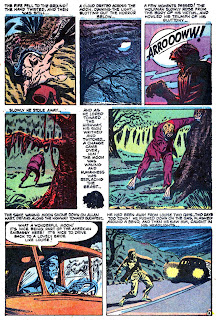 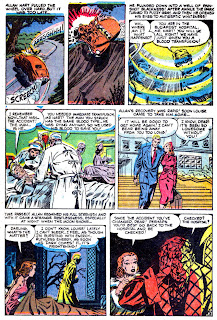 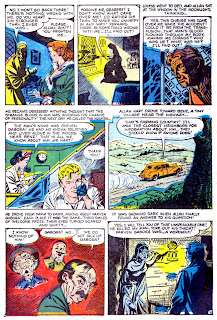 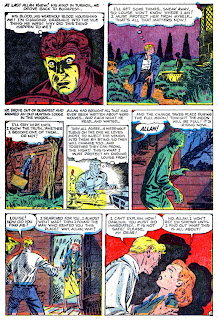 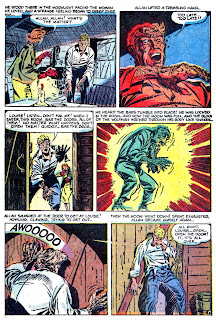 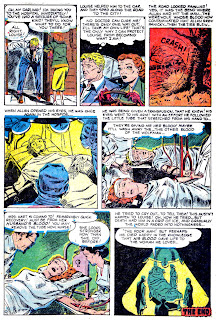 I agree, the production value makes it what it is: a comic book! I'm not ashamed that I love off register color on newsprint, it is that aspect that IS the American comic book. can't get enough of back issues myself, recently acknowledging that the 1970's Marvel's are actually some of the best covers, they look like what they are. The modern stuff is spooky to me Photorealistic airbrushy screaming faced people, maybe in 50 years those will be cool too.

Great story and art, I get a kick out of the hairy lettering on page 1.

I've seen a lot of pre-code werewolf stories, but this one has an angle I've never seen before. Page 3/Panel 3 has a great example of the attempted high-end word-smithing of horror comic writers.

I know the old mis-aligned color printing is part of the "charm" of older comics, but with my OCD it drives me nuts!

I assume the guy one page 1 wasn't killed for sport but because the werewolf really hated cliches!

Syd Shores was really underrated as a story teller; that opening page is great stuff.

The story itself isn't bad either, it's actually fairly subtle in that we don't see the woman become a werewolf at the end, we just know what's going to happen.

I recently did a blog post on the best/most infamous vampire stories from horror comics. Now, I'm wondering if I should do one on werewolf stories.

It took some time before the common representation of a werewolf developed from Jack Pierce's makeup for Universal. Page 6 could have been more effective had it developed the idea of a woman stuck in her home whilst her over is trying to break in, under animal guise, to kill her. As it is, the moon suddenly wanes and all is well.

really good, clever story, and first rate art by Shores. I mostly know him from his inking on Kirby's Captain America, so it's nice to see this.

100Aliases, I linked to your blog, "Out Of the Quicksand," and hope the link will help.

Gutterball and Gumba (wow, sounds like a good name for a band), the out-of-alignment color is a side effect of printing on giant web presses. I wonder if the pressman noticed if he would shut down the run and re-align the printing plate? Probably not. Time was and is money in printing. I'm sure when copies of the comics got to the publisher there was a lot of cursing over sloppy printing.

Gumba, I had OCD until a few years ago when I went on meds to control it. It's funny, though...there are times when I miss it because it built my collections (couldn't stand to miss an issue, you know, and would move mountains to find it). I wonder if many collectors have OCD, completists especially.

Everyone, thanks for your comments. This story got a lot of comments when I ran it originally some years ago. It's a good story, and well told. I have a Syd Shores crime story coming up in mid-June.

I'm sorry your comments were delayed in being posted. I have had a guest in my house—my son, who was here for five days—and gave him the priority. He's a great kid who goes around the house fixing things his old man has neglected (or more properly, has saved up for him to fix). But this time there wasn't anything to fix. We watched some movies and just generally hung out. I've only seen him a handful of times in the past four years since he moved a couple of thousand miles away, and I drop everything else when he's in town.