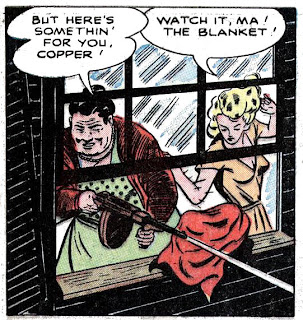 If you only knew the late Shelly Moldoff from his ghosting of Bob Kane's Batman from the years 1953-'67 you might not recognize him in this lively, action-packed strip from Underworld True Crime Stories #2, (1948). In Batman Shelly's style was very stiff, but there is a certain freedom in "Mother Knows Best" that he didn't show in Batman.

"Mother Knows Best" is a fictional version of the infamous real-life Barker-Karpis gang, notorious in the lawless era of the early '30s. Kate "Ma" Barker was said to be the head of the gang, training her boys to be criminals and killers. Ma Barker was killed in a shoot-out with FBI men. Author Bryan Burrough, who wrote one of the definitive books on that age, Public Enemies, claims that Ma was just a grandmother who went along with whatever her family was doing, living off the money they heisted. (No Social Security in those days!) The killing of an old woman in a shootout would have outraged the public had not J. Edgar Hoover created an evil persona for her. The story, embellished several times by Hoover, has come down that Ma Barker was a criminal mastermind, when the public record proves she was anything but. What the comic book scripter did was create a character like Hoover's legendary Ma Barker, and a story loosely based on the crimes of the Barker-Karpis gang. 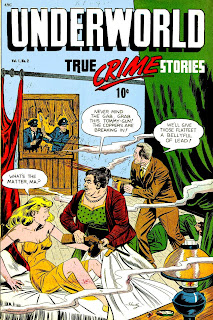 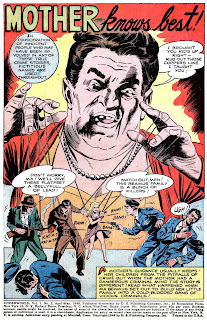 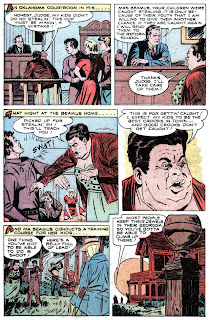 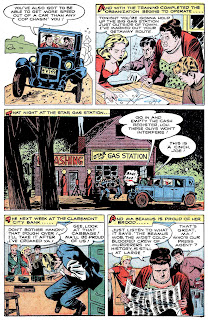 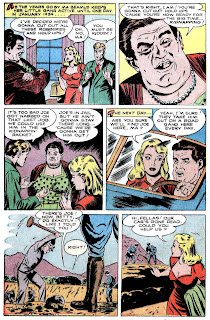 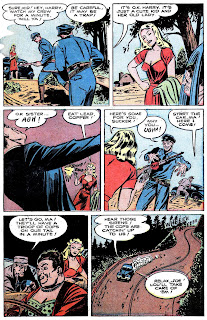 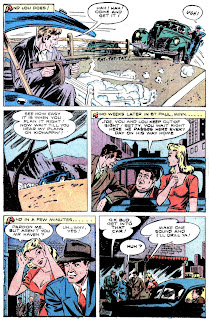 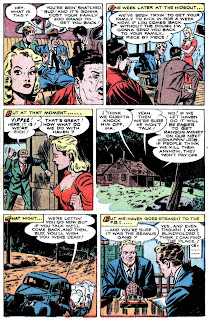 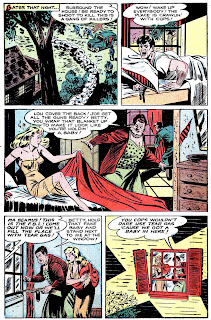 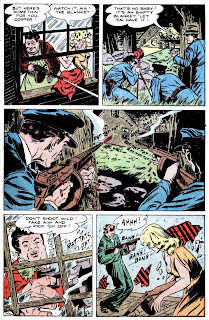 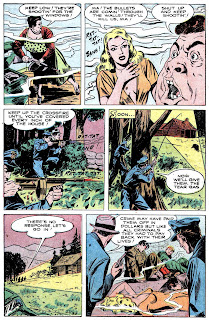 To quote the Times's original review of Gulliver's Travels, "I don't believe half of it".

Guns!
Axes!
Dead Guys!
Cops and Robbers!
Some large gnome-like creature!
A hot woman obviously drawn naked and then had a gown poorly drawn over her (check out the legs, how does that fabric work in the real world?)
And ... shower curtains?

Hoover's myth making worked, very few people think of Ma Barker as anything else than a criminal mastermind.

The part of this story that gets me is how the added femme fatale jumps out of bed during a gun fight to put on ... an evening gown! I know women back then always wanted to look their best but that's carrying it to far! And boo to the colorist for using the same color, it was confusing!