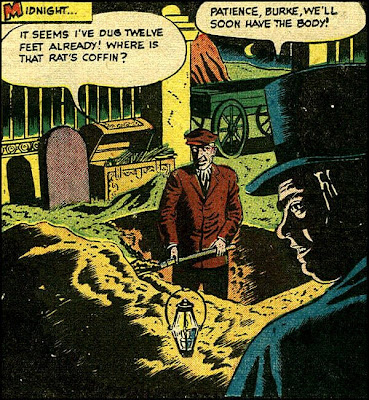 "To burke" is to kill by smothering or suffocation. The verb comes from this pair of miscreants, Burke and Hare, immoralized…heh-heh, I mean immortalized, in "Ghoul's Gold" from 1946 in Crime Does Not Pay #43. It's written by Robert Bernstein, who later worked for EC, writing the entire run of the title Psychoanalysis. He was an all-purpose guy. A couple of years later he did Aquaman stories for DC.

Jack Alderman was the artist of "Ghoul's Gold." Jack had a very heavy-handed style. I don't think I've ever seen anything drawn by him in any but Lev Gleason's crime comics. His figures are stiff--get it? stiff?--and his inking is heavy and dark. In other words, just about perfect for this little tale of a couple of infamous murderers… 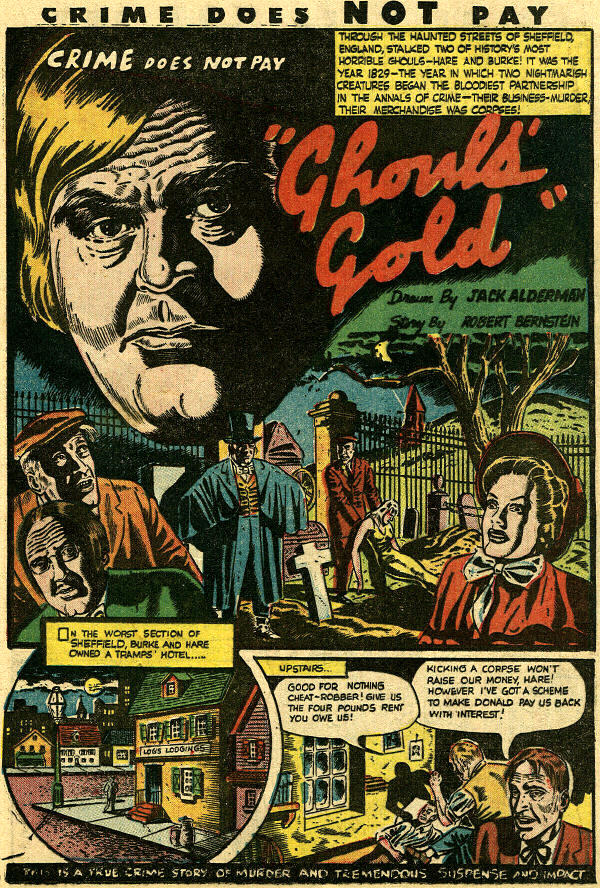 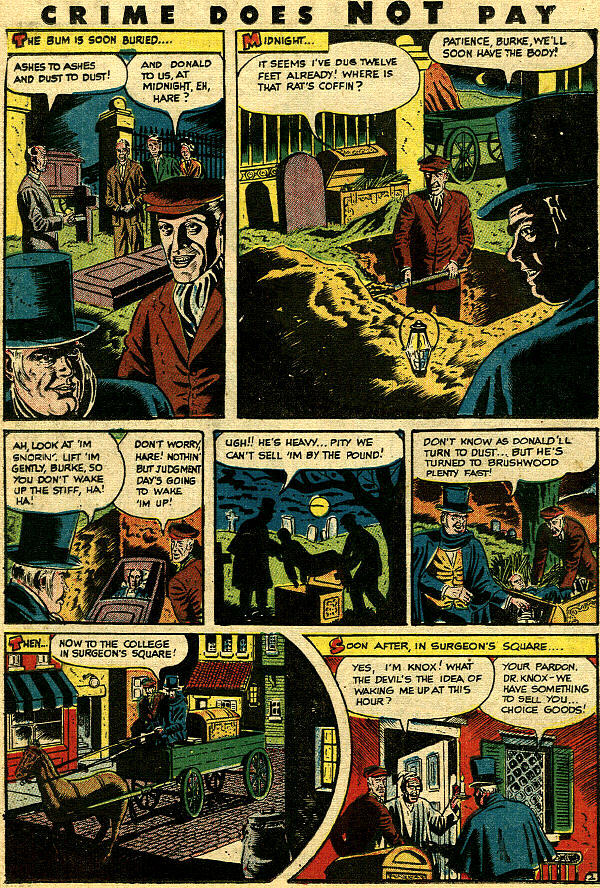 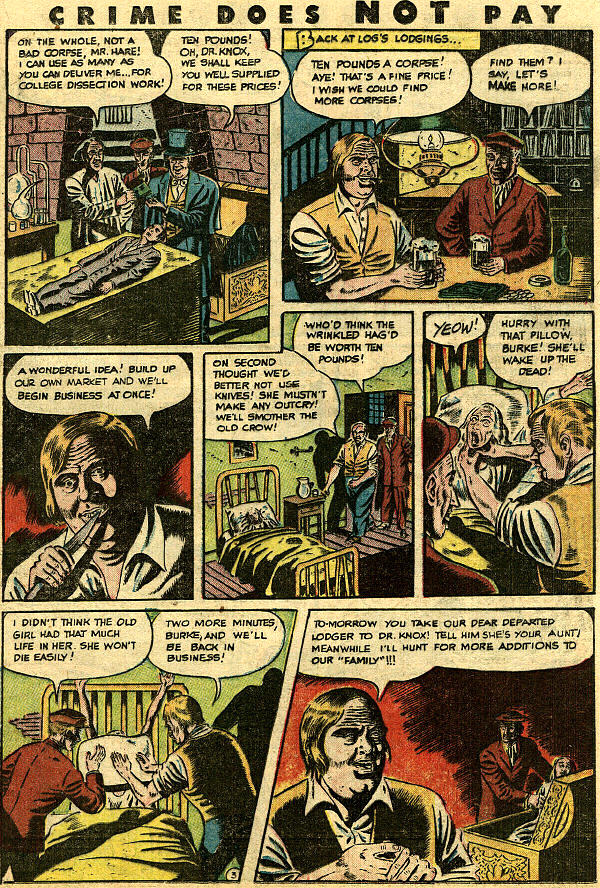 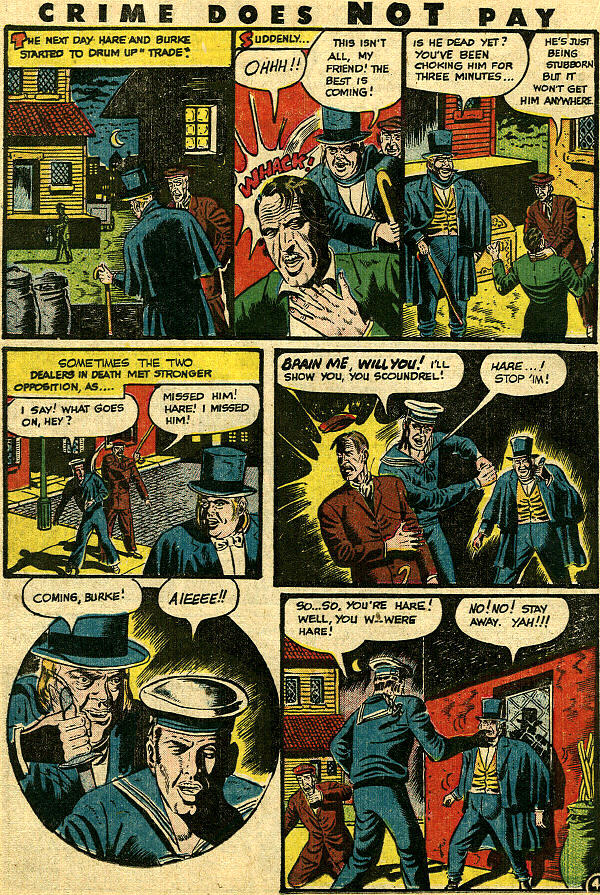 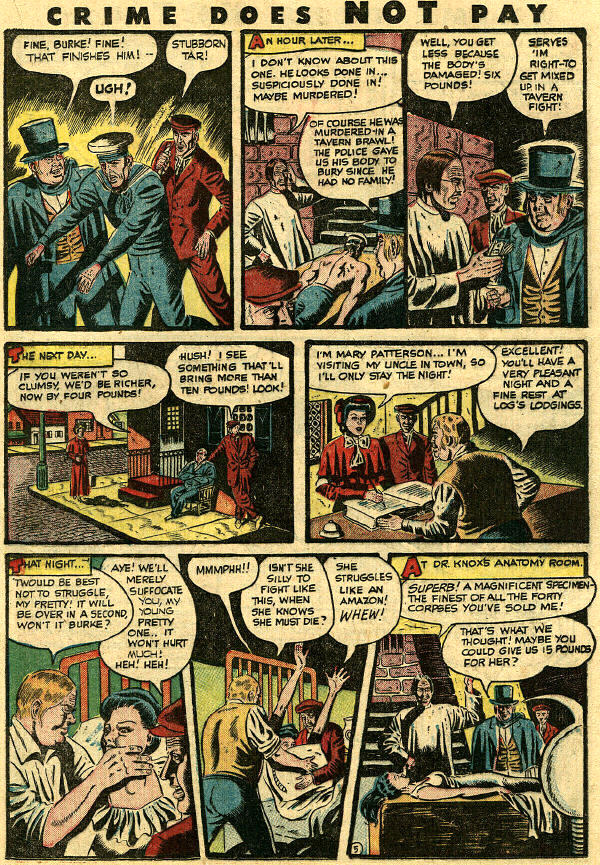 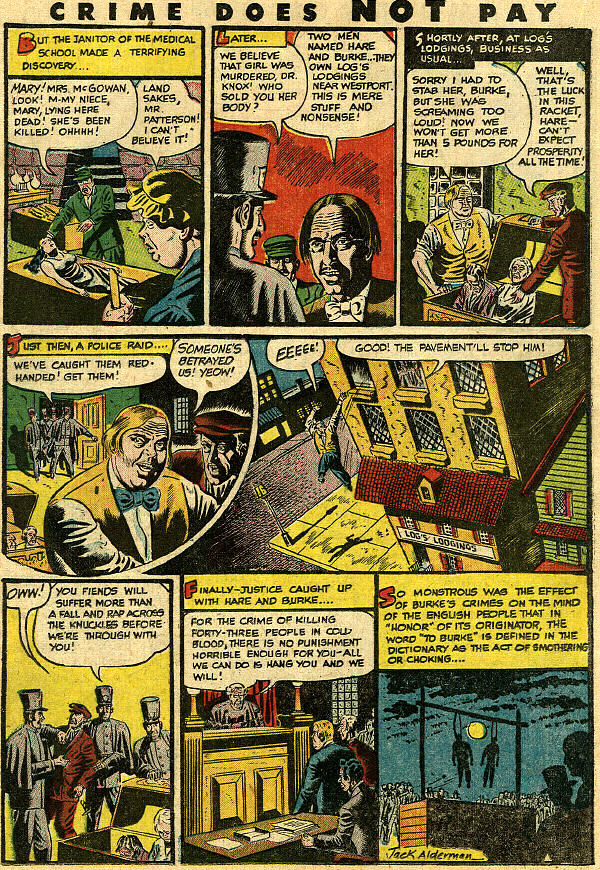 Email ThisBlogThis!Share to TwitterShare to FacebookShare to Pinterest
Labels: Burke and Hare, Crime Does Not Pay, Jack Alderman, Lev Gleason

I guess it's our turn to have a mental connection today Pappy, this morning my post also has a dictionary definition! But this is a very cool tale about everyone's favorite body snatchers, it's actually better than any of the countless movie versions.

Also if you missed it, I posted a story by Krigstein last week called Ghoul's Gold... the evil planets have definitely aligned once more!

I really enjoyed today's post too. I like this story each time I hear it. I don't know what you mean by "actually better," Karswell--more accurate? More dramatic? Scarier? I think that Corridors of Blood is pretty unstoppable. But I'll admit that the agonizingly pedestrian quality of the murders presented here makes this one a lot scarier than the Body Snatcher.

This is a weird one; bits of it are right and bits of it are wrong. Edinburgh would be a bit put out to discover that it's magically turned into Sheffield, and presumably shifted across the border into England in the process. Burke and Hare did sell the bodies to Dr Knox, but when they were finally caught, Hare did a deal with the prosecution and wasn't executed. The accurate story is easily as horrible as the one told here, so why the changes?

Ah, I had a hunch that seems to be on the money. In "The Body Snatcher" (1945, starring Karloff and Lugosi) although it's not actually about Burke and Hare, it's based loosely upon the case and the protagonists talk about it, name checking Dr Knox in the process. I bet watching this movie was the "research" for the story, and the writer just filled in the blanks himself. I have to smile; such a bizarre way of developing a story is sort of awesome in itself.