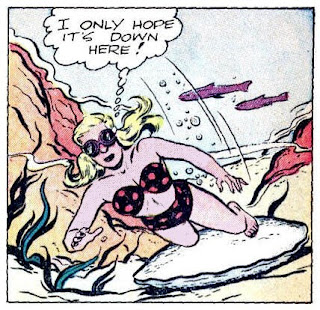 Undercover girl is tough. She can do what is necessary to solve a problem, thereby protecting the good ol' USA.

What a gal. Undercover Girl can also hold her own when it comes to fighting with other women. We know that because from what I have seen, Undercover Girl gets into a fight with another woman in almost every adventure (see the link below). In this adventure, though, she becomes not Undercover Girl, but Underwater Girl. She puts on a two-piece bathing suit and finds a missing ring on the sea bottom. That is after watching a shark kill a guy. She does not let dangers of the deep keep her from doing her job.

Ogden Whitney did his job. He was a comic book artist who over a long career drew beautiful sexy women and handsome heroic men. Some of his last work in comic books had him drawing the inimitable Herbie Popnecker. As much as I like Starr Flagg’s pulchritude, for me Whitney's depictions of Herbie were the highlight of his long career. 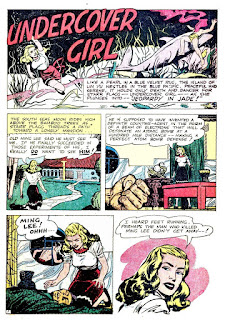 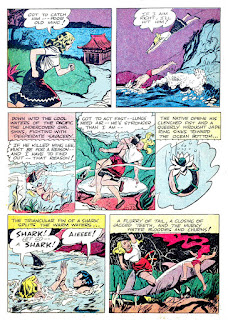 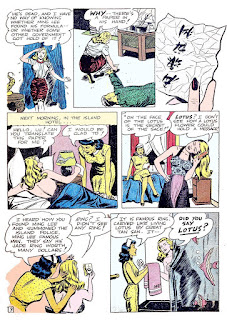 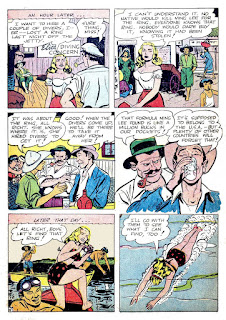 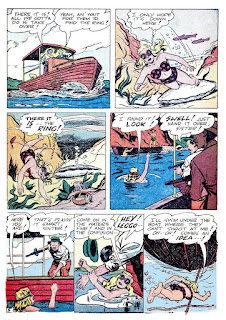 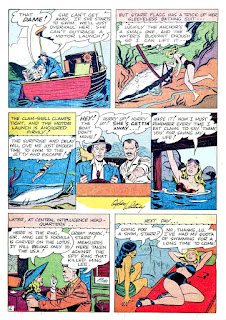 I imagined a Grand Whitney Crossover Comic, in which all of the recurring protagonists whom Whitney drew would appear. But then I realized that such a story would require Undercover Girl and any other Whitney heroine to go gaga over Herbie; that was simply too disturbing.

Giant clams used to figure large in popular fiction; now there's scarce a giant clam to be found. In any case, the villains should have been able to discern that they were held-back by their anchor, and to respond by cutting the rope.

The invention here reminds me of the Overkill Horn, which figured in a Nick Fury story. The Overkill Horn would denonate nuclear bombs where they sat. As a kid and still to-day, I thought that, if I had such a device, then I would effect a demostration, and announce that, in n days I would release the design to the world. The value of n would be chosen to give the nuclear powers just a little more than the minimal time needed to dismantle their nuclear arsenals. But Nick didn't seem to see that possibility; or maybe he saw it but didn't like it, fearing that conventional war would quickly follow.

In the case of this UG story, the invention is presented as more like an ABM device, detonating bombs before they reached their targets. But it seems that the underlying technology should work as soon as the warhead were armed, if not before arming; after all, a bomb could have a target very near to the launch site.