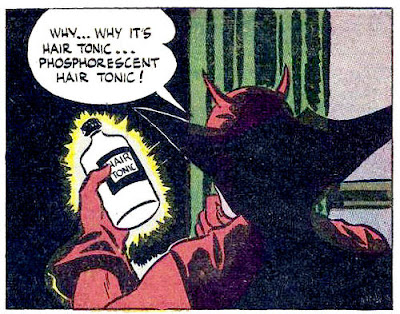 Bill Draut went to work for Simon and Kirby when he was discharged from the U.S. Marine Corps. He knew Joe Simon from their service days, and Joe invited him to do some comic book work for them. Among the jobs he did were four episodes of “His Honor and the Demon” (on today’s episode it’s “His Honor and the Red Demon”). Draut worked in comic books for years. His work was very slick and illustrative, and biographical information says he worked drawing love comics and also mystery comics for DC. I have never associated him before with any costumed heroes except the one I am showing today.

The Demon, or Red Demon, is actually a judge who goes out in costume to bring bad guys to justice, so he can preside over their trials and send them to prison. At least that is how I read it. A real conflict of interest, and even in the late 1940s would have been frowned on by his professional colleagues. He is Judge Straight, and he (mostly) lives up to his name. He is a hardass jurist...on page 4 he sentences Joe Monsi “to death by electrocution at midnight two days hence!” Does not give poor Joe much wiggle room for proving his innocence, does it?

This particular episode comes from Black Cat Comics #6 (1947), and while it is the third episode to appear, it is an origin story. I believe the Red Demon stories were probably inventory at Harvey Comics, and plugged into a number of pages of the comic book no matter whether they were sequential or not. At the point of his career that this was drawn Draut’s artwork looks to have been influenced by Terry and the Pirates creator/artist Milton Caniff.

Oh yeah, let me call the first page splash to your attention...the beautiful blonde is tied with rope in a bondage pose. That doesn’t happen in the story so the writer, or even Draut, took a little artistic license for the perverts readers who like to see females trussed up. 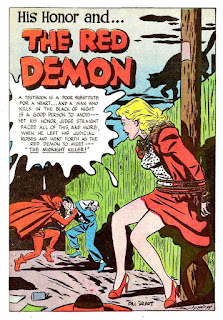 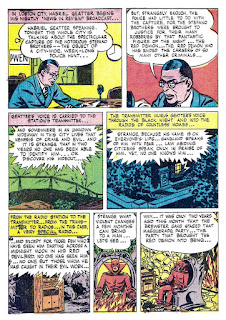 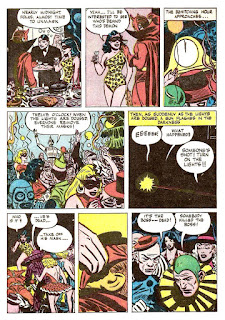 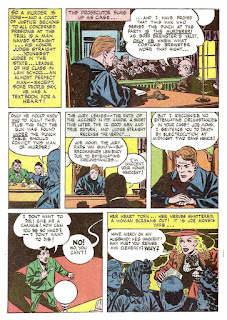 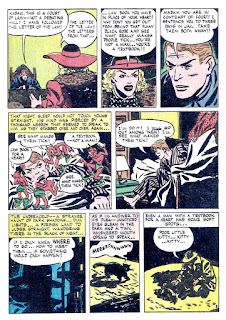 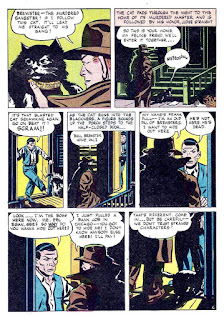 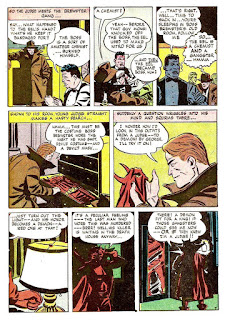 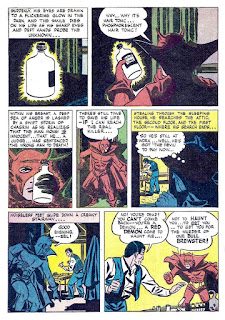 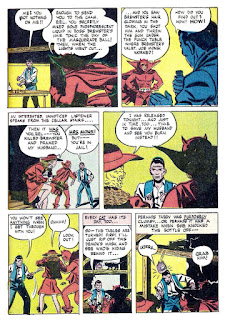 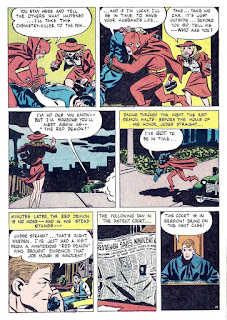 Yeah, Pe— er… Joe's wife could have been shown in the splash panel, in almost that same position, without any bondage.

Decades earlier, in some territories of the United States, executions might have been effected in a matter of a few days (or hours) after sentencing; but it's hard to imagine such a case in 1947 (though the amount of time between sentencing and execution was often still uncomfortably short). Of course, the two-day deadline is just a device to add drama to the story.

Straight didn't have good reason to don the costume, and it was rather irresponsible for him to attempt apprehension, instead of escaping to make a telephone call almost as soon as he discerns that there is reasonable doubt of Morsi's guilt; but, without the first device, the Red Demon wouldn't have been a costumed crime fighter, and without also the second, he would have been an unusual costumed crime-fighter. It would actually be at least slightly amusing to have the Grey Sneak, a costumed crime-fighter whose existence would remain unknown to the criminals, as a result of his or her always lamming-out once he or she had located crucial evidence.

Meanwhile, I note that we get felem ex machina not once but twice in this story.

Let's see. The prosecution claims it has proved Joe Monsi guilty despite the fact that it presented nothing but speculation and conjecture. The jury finds him guilty on this flimsy evidence in a "short time." They recommend leniency due to extenuating circumstances which suggests that there must have been some reasonable doubt but they convict him anyway. Finally Judge Straight sentences him to death two days hence totally ignoring Monsi's right to appeal.
Some court system. I guess Joe Monsi was lucky he wasn't lynched on the spot.

Commentator "Habriel Geatter" = real-life Gabriel Heatter. Not a very inventive pseudonym. "But if we change it too much they won't get the joke!"

Daniel, Rick...it was why there could be suspense in a movie or book if someone was looking to prevent an execution at the very last moment by presenting evidence the prisoner was not guilty. Nowadays we expect the process of sentencing to death to be long, sometimes drawn out for decades. If that state has the death penalty, that is. A quick check of The Junior Woodchucks' Guidebook and Reservoir of Inexhaustible Knowledge, i.e. the internet, shows that 21 states of the United States have no death penalty.

Whiplash, reminds me of what was said about Milton Berle, who is said to have told his writers to make the jokes "lappy"...put into the audiences laps, that is, so they get it.