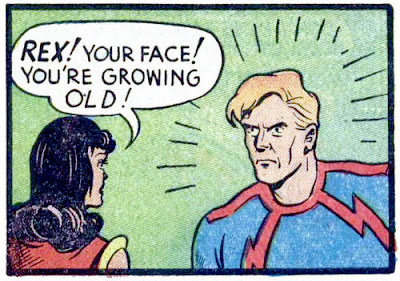 Rex Dexter takes quite a trip in this tale from Fox’s Mystery Men #5 (1939): he becomes old, then regains his youth. The story is another from the vivid imaginings of writer-artist Dick Briefer. Briefer was later known for his series of Frankenstein tales, spread over the decades of the forties and early fifties.

Today’s story is educational. We learn how name of Rex Dexter’s girlfriend and interplanetary traveling companion, Cynde, is pronounced.

A few years ago I showed the origin of Rex Dexter. You can read it by going to the link below. 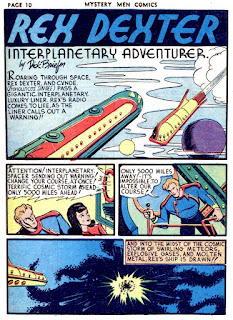 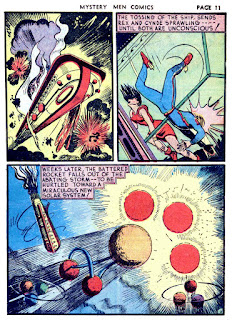 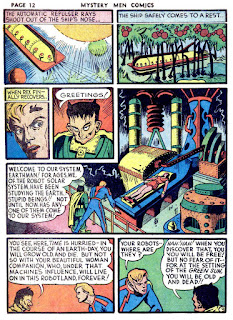 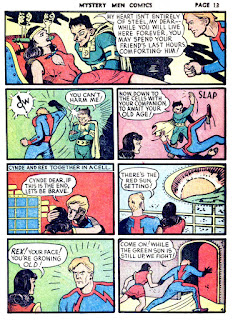 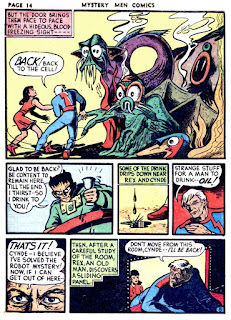 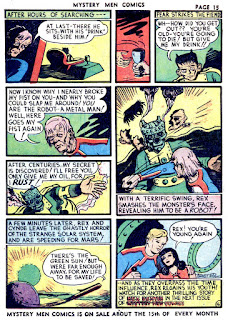 The origin(s) of Rex Dexter. Just click on the thumbnail. 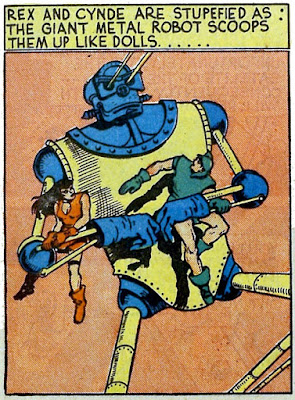 This story fits an ancient pattern found in myths and in fairytales, in which an adversary folds upon the discovery of a simple secret. Having this particular adversary consume oil from a goblet makes the story all the more like a myth or fairytale.

The science in this made me stupid :)

Briefer does some real imaginative work here. The story is all sorts of silly, but the monsters, the robot, the planetary system are all great pieces of art.

"We learn how name of Rex Dexter’s girlfriend and interplanetary traveling companion, Cynde, is pronounced." Where does this happen. I read it twice and don't see it.

EG-Markus, it is in the splash panel.

Daniel, as usual a comic book writer/creator dipped into the well of what-came-before, holy writ or fairy tales or pulps, to come up with something he can use to fill a few pages.

Brian, oh yeah...beyond the silliness is Briefer's love of science fiction and its trappings.

Setting aside the Rex Dexter tale in which Earth had implicitly established a successful economic system of communism, politics only seems to have informed what I've seen of Briefer's work critically and obliquely. By that, I mean that his other work doesn't seem to have been very political, and that, to the extent that it was political, it wasn't about what ought to have been done but about what Briefer thought wrong (or at least comic) in what were being done.

Perhaps he was merely keeping his head down, but consider that the Molotov-Ribbentrop Pact (better known as “the Hitler-Stalin Pact”) came into effect on 23 August 1939, and caused many Communists and their sympathizers to begin reässessing their beliefs. The arisal of Fascism had already created a crisis for the theory of history entailed by Marxism, which crisis had been imperfectly handled by forgetting earlier acknowledgment that Fascism were a form of socialism and relabelling it as “capitalism”; now there was a second volte-face, as a supposedly Communist regime formed an alliance with a Nazi regime, and engaged in coördinated conquest. Predictive failure undermines acceptance of any system of theory, and Marxism must rely especially heavily upon predictive success for validation, because it doesn't proceed rigorously from principles that are themselves evidently correct. A failure of the theory of history was a disaster for all of Marxism.

(In fact, the failures of theory associated with Fascism were not the first crisis for the Marxist theory of history. The political success of Leninism — the attempt to transition from a social order of feudalistic aristocracy to communism without an intervening period of a bourgeois market order — could not be accommodated by what had been orthodox Marxism. Most Marxists became Marxist-Leninists in order to accommodate the political success of Leninism. That conversion then made the actions of the Soviet Union still more important for them.)

It's plausible that Briefer, while continuing to regard a communist order as desirable, had begun to regard the whole construct as one more fairy tale.

Daniel, I stand in awe (or sit in awe, which is what I am actually doing.) I am thinking where else can you have a silly science fiction story, and because of an off the cuff remark by me come up with the pre-war history of Marxism and Fascism by an erudite historian? Well done. Well done, indeed.