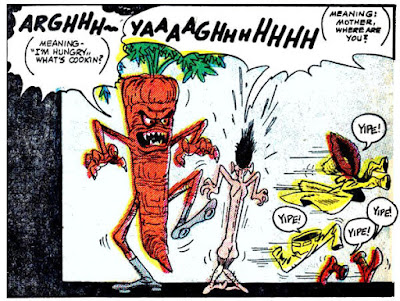 In the 1951 movie, The Thing from Another World, in describing the Thing itself one characters says, “An intellectual carrot. The mind boggles.” And so the portrayal in Get Lost #3 (1954), with their satire.

“The Some-THING” was drawn by Ross Andru ( co-publisher of Mikeross Publications with Mike Esposito) and inker Martin Thall. As a Mad imitator, Get Lost was probably better than at least 50% of the other Mad knockoffs, attempting to capture some of the lightning in a bottle from the Harvey Kurtzman creation. A problem for Mikeross was it entered the comic book field during a time when the market was experiencing a glut of product, and shelf space was hard to find. The other problem is, as John Benson, author of The Sincerest Form of Parody, put it, is that a large group of Mad’s readers were reading Mad because it was hip. They didn’t normally read comic books, including Mad imitators.

This story was reprinted with some other stories from Get Lost in Marvel Comics Arrgh! #2, 1972. 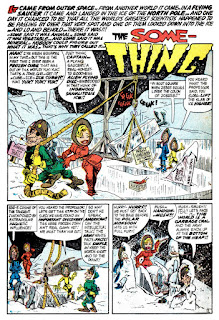 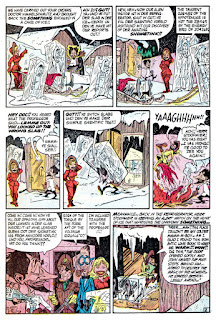 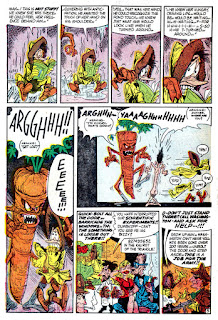 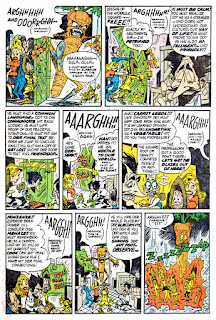 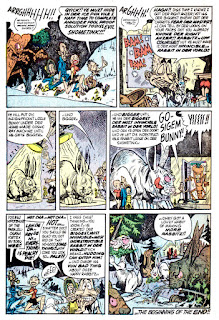 I've never been a fan of the accents in speech balloons, it just makes reading a chore. There's a couple good jokes here, the ending is good, but it really does have that also-ran MAD feel to it.

Andru does a good job with the cartoonish characters and the monster. A fun little story with some good moments.

Wow. The guy on page 3 looks just like Metal Man Tin and the Professor resembles Mercury.