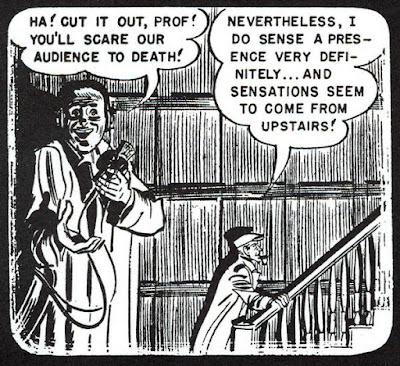 Our family got a television in 1950, and the terror — television addiction — set in.

Okay, that is my story. The story you came here to see is from The Haunt of Fear #17 (actual #3), in 1950. “Television Terror!” was written and drawn by Harvey Kurtzman before he became an editor at EC Comics. I am presenting it in black line because the way it was drawn and inked it looks more like the black and white TV that was the standard of the television industry then and for years to come. It is also an example of the way early television was sometimes presented, as radio with pictures. 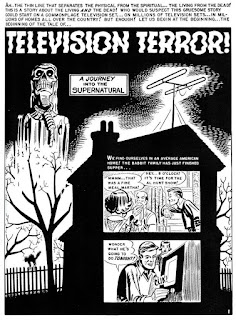 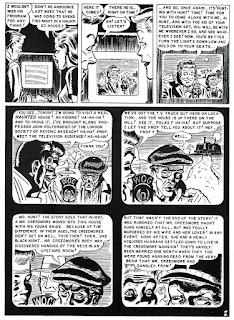 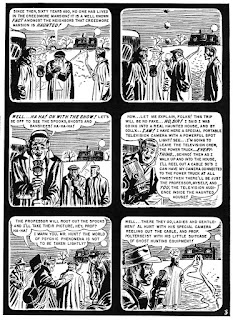 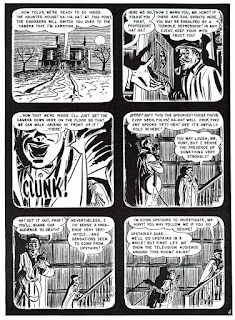 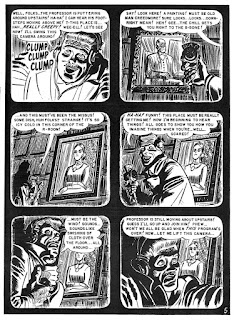 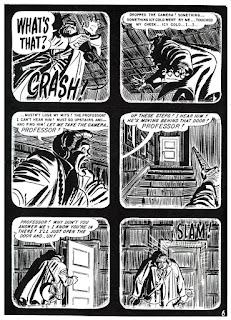 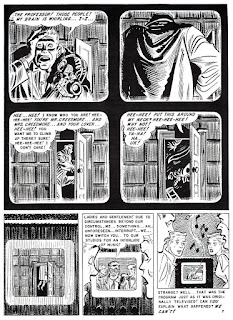 I really like the way this story is presented, as if it's seen during a live broadcast. And the characters are very cleverly depicted (Ha-Ha!)..

In those days, of course, television was the new sensation.
I would have expected a story where the tv set had a more specific (and evil) part, but that was yet to come...

As for the black and White, I think it adds the proper dose of fascination.
Being Italian and grown up in the 70's, I'm more accustomed to B/W comics (especially horrors) than the average American reader, I guess.

Now they're re-coloring everything for reprints :(

Kurtzman's flair for paneling and camera really shines through here, even with the more scratchy style. A lot of artists at EC supposedly really disliked the way Kurtzman would dictate the drawing but he really shows why he was probably usually right in this little story.

The story is pretty cliche -- it's a story heard around camp fires long before it sees print here -- but, again, Kurtzman's flair for pacing and composition really sell it.

I will ding him on the professor character. He's very much a plot device that isn't especially useful. Other than that, a really quality version of a pretty old ghost story.

Alicia, as Brian Barnes noted, this is taken from an old, old story. I've read versions of it several times over the years. It gets updated every so often. An oldie but goodie.

Brian, I appreciate your comments. I believe, as most of the artists working with him would have agreed (some reluctantly), Kurtzman's instincts for storytelling and design were usually right on.

J D, I have seen computer colored versions of the Disney Zorro episodes that were shown on the Disney Channel years ago. Because it was filmed in black and white, and those were what I watched when I was 10 and 11-years-old, I prefer the originals.

I haven't read that one until now, but, i do remembered it best when they made that story into a episode of "Tales from the Crypt". It's that one with Morton Downey, Jr. But, believe me, I do love that Cryptkeeper doing the opening and closing of each episode!!! A great series, if you can get a chance to watch it!!!

Unknown, that episode, "Television Terror", was one of the episodes that got praised.

Jeez, Morton Downey Jr...I haven't thought of him in a long, long time.

The story I'm reminded of us the Suspense episode "Ghost Hunt" from 1949 http://www.escape-suspense.com/2007/04/suspenseghost_h.html

If nothing else this brought back fond memories of the punch-out ending of Captain TVideo! from the earliest days of MAD Magazine (which you mentioned back in 2011, Pappy). "For Heaven's sake, gang! Warn the Earth! For Heaven's sake... FEEP FEEP!!" How could something be so hilarious and mortifying at the same time?

But Pappity if this story is old than how come I soar tha Zack Bagans show B4 I red this comic? Riddle me THAT yo! OMG a pic of Debbie in ystrdy's BLIZZERD SNOW STORM in NYC! xoxoxoxo we luv u Pappity xoxoxoxo

Although I live a couple of thousand miles from the East Coast, I was also shoveling snow yesterday. Not as much snow as New Yorkers, but enough that my bones and muscles are complaining to me today.

Michael, thanks for the link. Reading about the show I know now that the story came from a story by H.R. Wakefield, which is probably where I read it in one of my many anthologies of weird and horror stories.