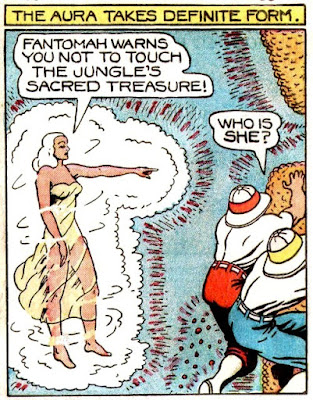 The quirky, oddball art of Fletcher Hanks is covered in two excellent Fantagraphics books by Paul Karasik:  I Shall Destroy All the Civilized Planets!  and You Shall Die By Your Own Evil Creation!  Karasik did research on the man himself, and gives us a bio of Hanks as an alcoholic with a mean streak who deserted his family. I think his personality disorders and addictive dependencies figured into his work.

Fantomah (by “Barclay Flagg”) is one of his creations. He apparently wrote, drew and lettered his own comics, so they had a singular vision. Fantomah dispenses justice in the jungle, and in this story to a couple of white hunters out to loot a jungle city of gold. Fantomah is magic, and her head turns into a skull when she goes to work on the crooks. (That is a unique characteristic, although The later Ghost Rider from Marvel comes to mind.) Hanks used tracings. He would repeat poses. When he got a drawing he liked he found it economical to trace it off and re-use it in the same story, sometimes on the same page.

I also noticed his writing. In this story, from Jungle Comics #3 (1940) the final panel is anti-climactic.
[SPOILER ALERT] The villains, who are spared by Fantomah after being transformed into giant green insect creatures, have a bland reaction: “Crime doesn’t seem to pay.” “You’re right.” I wonder if they considered how they would be perceived when they landed their plane and stepped out in their new bodies. Once done with the story Hanks just wrote finis without thinking of it beyond the final panel, except maybe how Fantomah was going to defeat the “wild legions of beast-men” in the next issue, as promised in the final caption. 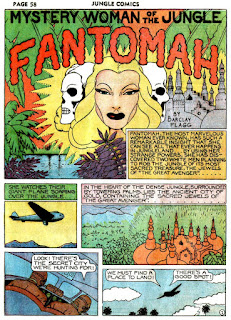 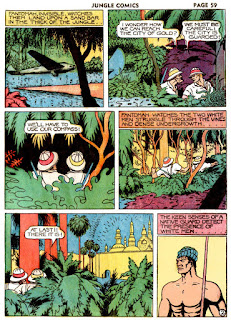 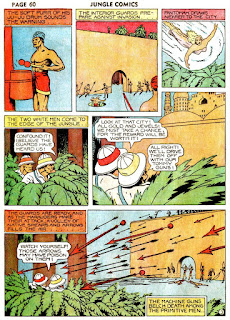 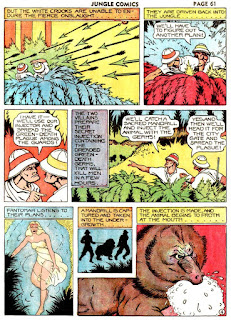 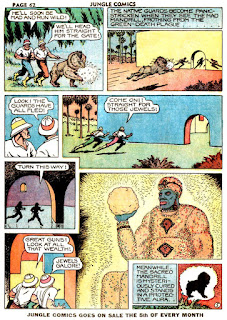 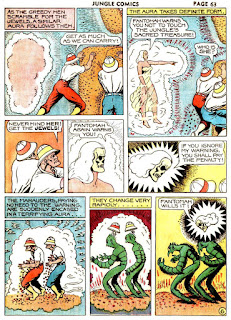 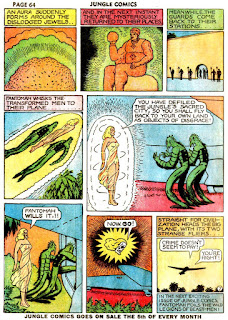 Talented cartoonist Eric Haven has done a pastiche of Hanks in “Bed Man” — which not only captures Hanks’s absurdism, but also manages to one-up him. You can see it by clicking on the thumbnail:

After Hanks left, Fantomah became a more conventional character with more conventional story-telling. But whoever was assigned writing duties for Tabu, the Wizard of the Jungle, attempted to continue stories told in much the same manner (except for considerably more refined illustration). That continuity in style suggests that the new writer(s) were mocking Hanks, or that there were believed to be a significant number of readers who really wanted just such stories.

Marshall McLuhan denounced comic books for using the slogan “Crime doesn't pay!”, but it has been found in sources going back to 1927, and it was in the early '30s adopted by the US Federal Bureau of Investigation. The comic books were either using the slogan in imitation of the FBI, or of the Dick Tracy comic strip. McLuhan's objection was that it would make crime seem to be acceptable if it did pay, but McLuhan was using a fool's notion of profit. Crime might reap great “material” rewards and yet still not pay when judged against fundamental standards. I surely would feel that I'd lost something more important if I did wicked things in order to attain material comfort, social position, and so forth.

Hanks' “Crime doesn't seem to pay!” is subversive, as it treats the matter with more doubt. And, as most children should have realized that their chances of encountering someone such as Fantomah were … uhm, remote, they might decide to entertain those doubts.

But Hanks probably didn't think of himself as a criminal (even when he stole the money with which his son supported the family that Fletcher Hanks neglected); rather, he probably thought that the world or society (= everybody else) treated him criminally, and got away with it.

Ah, Fletcher Hanks. He has a super distinct look when drawing characters, and usually his backgrounds are relatively bland but there's actually some pretty good work in this one -- good for Hanks, that is. The Mandrill eating a snowball is pretty good, and the very Basil-ish green monsters are fun.

Fantomah, the skull-faced jungle beauty with script-convenient powers, acts like most of Hanks' god-like characters (like Stardust.) Just observes UNTIL the crime is done, then punishes the evil-doers in a manner that might or might not be ironic. That begs the question about what is obviously Hanks' desire for divine judgement -- he's acknowledging that it's only punish, they never seem to intervene to help people.

Why didn't Fantomah use her aura to stop the crooks before they shot the living daylights out of the natives? She rescued the Mandrill, but, by the story, no humans!

This begs the question: would I date her? Yes, skull and all! :)

We recently discussed Wolverton, Cole and Hanks in a series of articles posted by Sauro Pennacchioli on his blog.

Sauro's point is that artists like them and Roy Crane (I'd say Briefer, too), may be called "Pre-Fosterites" (a hint to the "Pre-Raphaelite" movement) as they refused the strict adherence to reality and the accurate anatomies canonized by Hal Foster (and Alex Raymond).
To give you an idea of our ramblings, here's a comment I left on Cole's issue, where I suggest a "psychological" interpretation (of sorts).

"What Sartoris writes is interesting. Surely Cole, Wolverton and Hanks were influenced by “their own historical moment”, but then again, why is their work so personal and unconventional?
Cole perhaps a little 'less, but to me Basil and Fletch are real oddities. Reducing the matter to its basics, I’d say that:

-Cole: He has a tragic-serious side (Crime-Horror comics) compensated by a humorous side.
Overall the humor in his work is predominant.
The two sides are partially mixed in Plastic Man, with comedy prevailing.
His art is “rubbery” (huh!) Which can vary greatly depending on the circumstances but remains recognizable.
Possible suggestions (aside frombeing a Pre-Fosterite), Eisner and many cartoons.

-Wolverton: He has a weird-horror side (science fiction, horror, illustrations), very personal and heartfelt, eerie , that involves the concepts of "nightmare" and escape to other dimensions.
Has a humorous-mocking and satirical side, apparently chaotic but cleverly built, as Jacovitti will have (but he will develope it more).
The two sides are perfectly balanced and meet only in the grotesque illustrations (Lena the Hyena makes you laugh or makes you uncomfortable?). Possible suggestions, Segar for the funny side.

-Hanks: This is the weirdest of all. He lacks a funny side. Were I a shrink, I’d say he’s seriously messed up, because he only has the tragic-funereal side (his characters never smile, we have men ripping heads, women who turn into skulls).
The style is "unpleasant" and nettlesome, like some underground comics of 60-70. Possible suggestions: ???
Although I’m ignorant, my impression is that of a Non-American artist. I think he could have been a perfect cartoonist for Nazi Germany. Not ideologically speaking, but his gloomy, oppressive panels just make me think of the Nazis.

To conclude this tirade, Dr. Wertham style, for which of these three cases a suicide (without the benefit of hindsight) should be expected?
Cole with his soft-eyed little men may be considered "fragile", but I never thought that would have ended up killing himself
Wolverton after all seems the most well balanced.
Hanks is probably the kind of man that made the others want to commit suicide."

I really love how strange comics were before World War II. There was dreamlike imagery that came unmediated from a lot of the young artists, prior to editorial controls and conventions later imposed by the suits who had to think about competition in a booming market. When the war hit, all of these superheroes became soldiers who protected the status quo, which was only reflective of the rest of popular culture: all of media joined the war effort and comics were a big part of the zeitgeist. Early Dr. Fate or even Batman (Did you ever see the Bob Kane story about the guy without a face?) were as hallucinogenic as Rory Hayes comix. Fantagraphics also included Hanks in a collection of early comics called Supermen! They're so primal and unselfconsciously beautiful they could be considered naive art.

Love those Fletcher Hanks bizzarities, and love Fantomah most of all. I have to! Just look at the page in which Fantomah finally confronts the bad guys. She transforms from a half-naked blonde bombshell into an angry floating skull and they completely ignore her until she visits her mystical wrath upon them.

I'd swear Hanks saw a little kid ignoring his mother's commands until she jumped up and smacked him, and turned it into a superpowered jungle adventure story.

Thanks for the link to Haven's comics, Pappy. Those are delightfully messed up. Nothing since 2013, though. Dare we speculate?

BillyWitchDoctor, I definitely would like to see more of Haven. I find his art fascinating.

Russ, I think yours is a pretty good assessment of what I think of as the wild and woolly days of the comics, before Pearl Harbor. Companies were jumping on the comic book bandwagon and the stories were all the place with strangeness and individual artistic quirkiness. I have read several artists' stories of artists coming out of the Depression, trying for more lucrative jobs in art and finally finding a home in the low-paying comic book market. You might say some of these stories are from hunger.

Brian, we live in a punishment society. But then, that seems to be the history of humanity. When people think society should step up and help people before and after they become criminals those folks are considered "bleeding hearts"...some people believe we should get even rougher on those who make mistakes. Maybe heads on pikes posted near the Interstates would satisfy them.

J D, thanks for translating from Italian that exchange for us.

A late friend of mine, who wrote about comics until his death in 1997, did a lot of research on Jack Cole's suicide. He came up with a fancy theory involving Cole's time with Playboy magazine, his wife and his childless marriage, but no one really knows. Neither Mrs. Cole or the inquest into his suicide, ever made Cole's suicide note public.

With his alcoholism Hanks committed more of a slow suicide.

Daniel, I think of "crime does not pay" as the type of pithy wisdom usually found on bumper stickers. My mother quoted it to me in my youth when I showed interest in crime and detective fiction.

I recall an interview once with Henry (Goodfellas) Hill where he said that criminals worked harder than "squares" who went to an 8-hour-a-day job. Criminals just liked being criminals.

And in one sense crime pays a lot. The producer of CSI said that program was being shown all over the world. Crime is very lucrative to those who make it into hit movies, novels and television programs.

No doubt the insect men's arrival in the city would set up another Stardust adventure and prompt him to fume, "Stop sending me your screw-ups, Fantomah!" I would love to see a series of stories where they keep trying to one-up/piss off each other.

Thank you for the link to Bed Man, that was fun!

I laughed at Mr Hoskin's suggestion. But it then occurred to me that someone ought to create an analogue to the Justice Society &c, bringing together all of Hanks's heroes.