Number 1840: Love and fraud for Claude 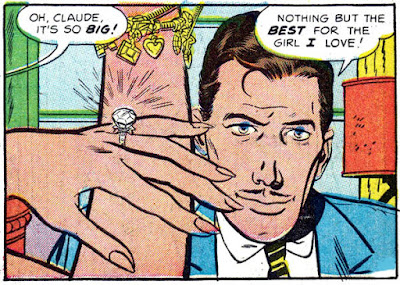 Who can resist a story about a gigolo? I can’t. When I was 14 our assignment in English class was to write a composition, what career we wanted to pursue when we grew up. I put down “gigolo.” I explained it was because it meant that girls would pay for dates. I thought I was being funny, but I got the paper back from my (female) teacher with “gigolo” underlined in red pencil and a stern note: “You need to look up this word for its precise definition.” I did. I defend it as a career choice, but unfortunately for me it was not to be. What I need now in my dotage is a gigolette. Also not likely to happen. (Especially if I want to keep Mrs Pappy.)

We meet both gigolo and gigolette in this story, drawn by Ross Andru and Mike Esposito for Heart and Soul #1 (1954). The art team had their own short-lived comic book line that year. Unfortunately, they came to publishing at a bad time for the industry, with titles crowding each other off the racks. Heart and Soul lasted only two issues. 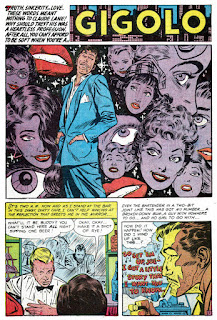 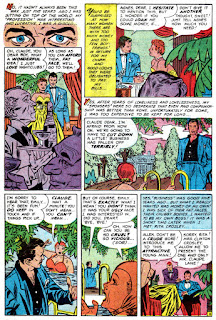 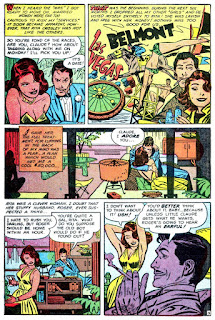 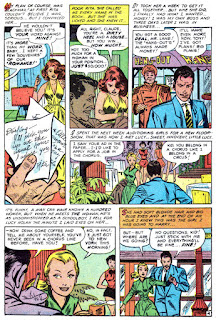 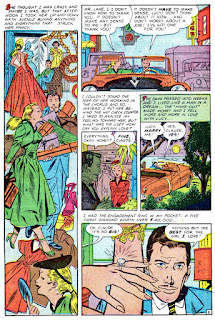 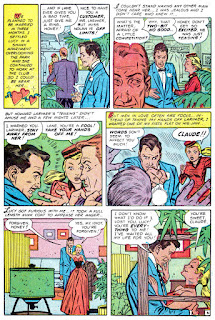 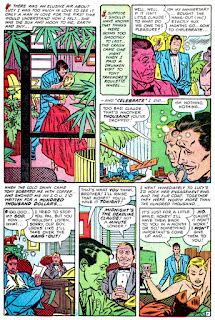 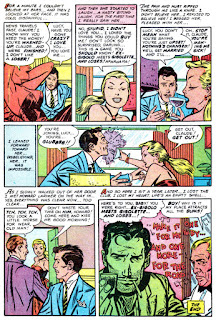 Louis Prima and Keely Smith did “Just a Gigolo/I Ain’t Got Nobody” on a television program in 1959. Years later Van Halen ex-lead singer David Lee Roth remade the Prima version of the song.

I've always liked this one. Stands well above the average "Romance comic" mediocrity, where everything goes fine with just one "I-forgive -you" kiss in the last panel, after pages and pages of cheatings and tragedy.
Plus, usually is the treacherous/careless/greedy GIRL who gets her just desserts.
Usually the girl is the "weak" and "sinful" element in these comics.
So, I can't help but love "Gigolo meets Gigolette".
By the way, lyrics in the last panel are from "Make it one for my baby" by Frankie Sinatra.

J D, since we're being musical, here is an old television version of "One For the Road" by Old Blue Eyes, himself.

bzak, must be that skinny caterpillar of a 'stache that makes him look like Flynn. Of course, Flynn had that reputation as a womanizer...

I asked Mrs Pappy if tha skinny mustache makes a guy look sophisticated. She said it looks like it would tickle her upper lip. (She never said that about my mustache, but maybe she's just being polite.)

The only current celebrity (if you can call him that) I can think of with one of those pencil-thin mustaches is John Waters. Gigolo? I think no.

The problem with our Gigolo in this story is he doesn't know the first thing about running a business -- don't piss off the clients. When his first mark's money dries up, he insults her and gives her the heave-ho, no no no, you make some excuse and disappear; if her money returns you can go back to that avenue.

It's a fun story, though one thing about it always bothered me -- it's not like he lost his looks; he just needs to shave and then get right back on the wagon again.

I've noticed that, over time, the implicit meanings of skinny mustaches in comic books changed. At one time, a fair number of heroes had them. At a later time, they were a signal of villainy or dissipation.

The character in this story is both villainous and dissipated. I don't know that Flynn were villainous, but he was certainly dissipated; by 1954, that would have been apparent, and he died in 1959, a few months past his fiftieth birthday.

With facial hair now in vogue amongst real-life hipsters, I'm frequently tempted to go clean-shaven! But I've never been one for skinny mustaches.

Pappy - When we were in San Diego at the Hotel Coronado, I saw a young buck rubbing sun tan lotion on an old, (much older), lady on the beach. I had never seen a real gigolo before and it made me wonder if I had made a bad choice in choosing the job I had at the time. Hey, I can rub lotion on wrinkled skin as well as him.

DEMiller...Dave, old buddy, that must have made an impression on both of us, because to this day I also remember it. (I also remember we saw original Dr. Seuss artwork at a show, which is the other thing I remember about that day.)

Is it too late to attract those wrinkly skins at our age? Personally, I always liked older women, but now the older women are like me, too old for such nonsense.

Brian, methinks you know quite a bit about the gigolo business. Perhaps you are telling us that not only are you a YouTube star, you might supplement your income with a side business involving ladies...?

Daniel, hipsters, schmipsters. A beard means nothing. I grew my first beard when I was a senior in high school (principal made me shave it off before he would let me graduate). My sensitive skin was not made for shaving, and I suffered throughout my Army career with various rashes and problems from shaving. I grew my current beard in 1973, and have never been without it, except for a couple of times when I gave it a bad trim and had to start over. I don't count those. Beards and whiskers have gone in and out of style but I don't care.

My wife likes those buckaroo mustaches, you know, the Wyatt Earp-style heavy 'staches. I can't grow one of those. If I didn't give it a weekly trim my beard would grow to the floor, but my mustache grows to the bottom of my top lip and stops.

Sad thing the same will eventually happen to Gigolette. I like her character, interesting and, eventually, tragic. In fact, the only one mistake Claude did was not being sincere with his clients, he just needed to say "I'm here for your entertainment if you pay me", but nope, he made those ladies to fall in love with him :(

yelinna, agreed, but then we wouldn't have a story, would we? It would be just another love story with a cheery ending, instead of a story about a cad who got payback for his history of misleading women.