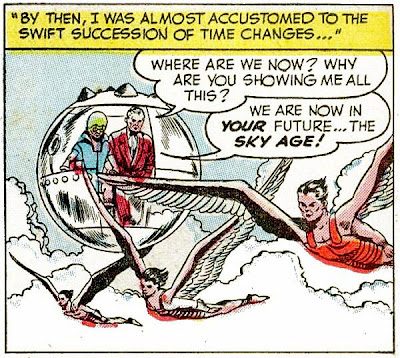 A story title like “The Endless War,” from Strange Adventures #2 (1950), reminds us that after active military engagements going back to 2001, we seem to be waging just that, an endless war. In 1950, when this story was written, the most destructive and powerful war in the history of civilization had been waged a few years past. For Americans, who joined the fight late in 1941, the war lasted just about 3 1/2 years. (It probably seemed longer at the time.) The Korean War started in 1950, but that lasted just over three years until a truce was called. In 1950 endless war probably seemed like a science fiction concept. Then in the sixties into the seventies we had Vietnam...and now...

Oh well. Back to the comic book. The story is unsubtle, but contains a plea that once started, wars are hard to stop. Although credited to H.L. Gold (Horace Leonard Gold, sometimes writer and full-time editor of Galaxy magazine), editor Julius Schwartz’s records show the actual writer was Batman regular David Vern (David Vern Reed, born David Levine). Perhaps Gold, who had written comics in the early 1940s, had Vern ghost write the story for him. It was drawn by Curt Swan and John Frischetti. 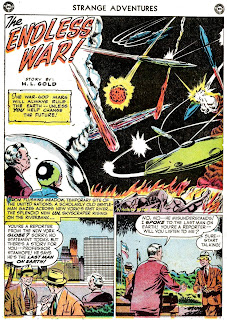 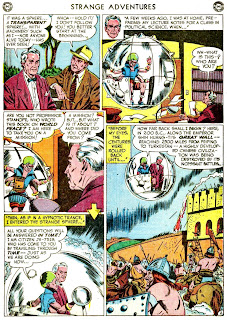 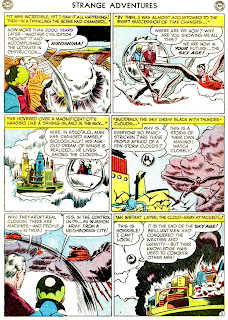 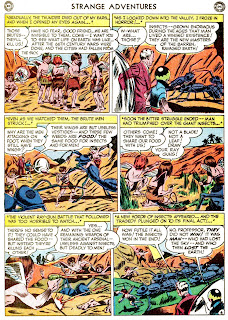 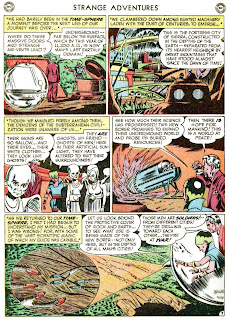 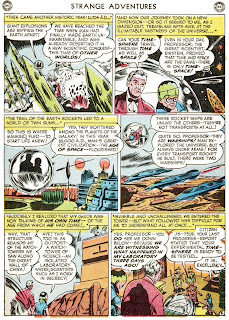 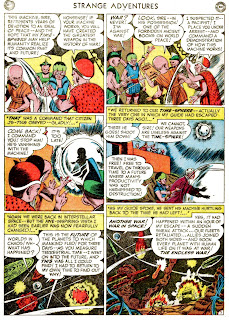 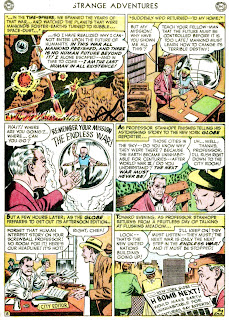 Sort of a bellicose Zager-and-Evans there.

In the same era, Simon and Kirby produced a story with a similar sort of moral, except that they made a pitch for a world super-state as the ostensible solution.

But war is only restrained to the extent that we agree as to what is just. Pope Paul VI told us “If you want peace, work for justice!” but, setting aside nihilists, those fighting on each side are trying to do that, with different ideas of justice across sides. Surrender to a perceived injustice does not seem like a real peace to the defeated.

While Hitler's regime was defeated by V-E Day, there was a small amount of violent resistance to occupation for some years beyond that.

I wouldn't say the story is "unsubtle", it has a strong "literary sci-fi" aura unusual in comics. Everything is properly explained, e.g. the fact that man "changed himself biologically" (nice idea for the fifties, when almost every comic was inspired by robotics and nuclear energy), the vestigial wings of the Fallen, etc.

You know, this story is almost identical to a Zio Paperone (Uncle Scrooge) story of the seventies written by Jerry Siegel for the italian Topolino (Siegel wrote a handful of great stories for it). Link to Inducks :

Plot: An ancient Pharao's mummy revives in Scrooge's private museum and is taken back to his time in Gyro Gearloose's time machine. The Pharao promised to double Scrooge's wealth, but doublecross him and the ducks barely escape from slavery.
Scrooge starts visiting various places in the past and future : in 1800's californian gold rush he tries to claim the richest mine but fails. In the future, in a world where only wealth counts and everybody is rich he is appointed "High Plutocrat for a Day" and rules the world for 24 h, but then has to escape an execution ("It's for your own sake: after 24 h as High Plutocrat the rest of your life would be unbearable").
In a further future Scrooge, Gyro and Donald find a desolate Earth and a dramatic record ("This is the last of the 10.000 Wars for Money... I'm the Last Man on Earth... Look into my eyes... Now I die... Greed destroyed us all!).
As the moon is about to smash the planet, the ducks manage to get back to their time. Scrooge has learned that greed has its limits... until next time.
Sorry for the long comment, but the similarity of the stories brought me fond memories. Thanks for the story, and for your patience.

J D, you should be doing a blog or writing a history of comics. You have a flair for writing and knowledge of the subject.

Anyone that can tell me that Jerry Siegel wrote Uncle Scrooge stories is A-OK with me! Up until you told us that my knowledge of Jerry Siegel's European comics was only that he wrote The Spider.

Thanks for that information.

Daniel, I thought the final panel of the story pretty much summed up the pacifist viewpoint. The H-Bomb (first tested in 1952) was a fearsome device. Make your peace, end your wars before they end you is the message I take from it.

Thanks for your kind words!