With the 1948 cover of Phantom Lady #17, artist Matt Baker helped give us comic book fans a code word we've used now for decades: “headlights”. It happened when Dr. Fredric Wertham, M.D., published his book, Seduction of the Innocent, which pointed out how murder, crime and sexual perversion were all part of the comic books kids loved. Wertham used the cover to point out that children called big breasts on comic book women “headlights”. (This page has been razored out of some of copies of SOTI I've seen. By headlights fans, no doubt.) 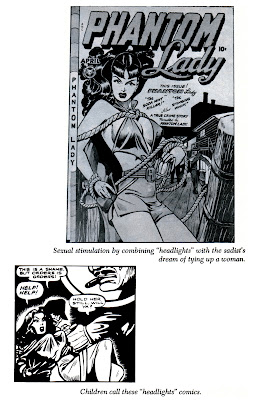 I've pointed out before that Wertham’s book is a good example of the Law of Unintended Consequences. It was used at the time to condemn comic books, but is used now to identify comics that belong on a special list of desirable collectibles. Interior art on this story is also by Matt Baker, and the whole issue was prepared by the Jerry Iger comic book shop, where Baker was a star. The publisher was Victor Fox, and the blobby printing was by some fast and dirty web press printing company of the 1940s, which didn't care that they were printing one of the most iconic covers and collectible comic books of all time. 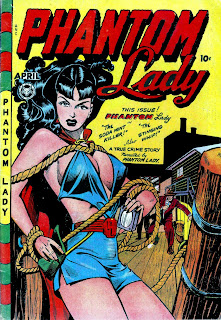 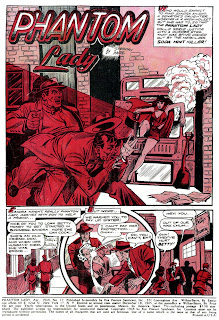 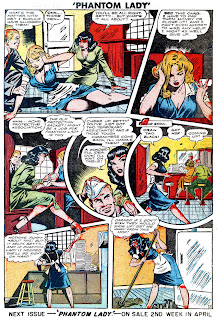 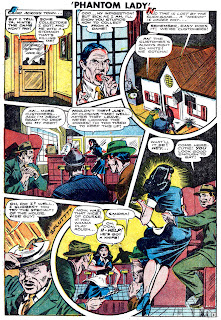 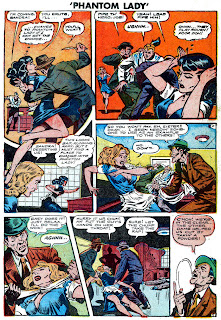 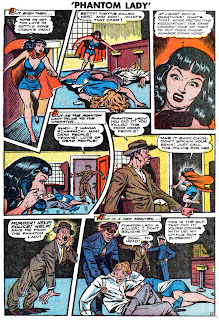 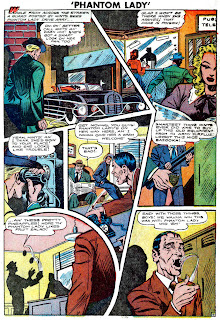 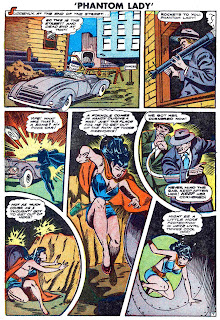 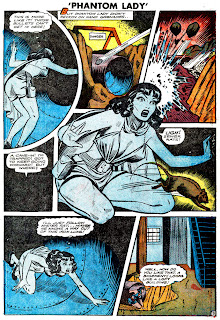 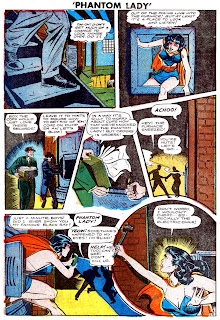 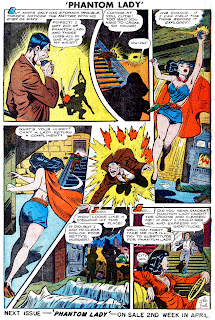 I've always said bad art couldn't ruin a good story, but good art couldn't save a bad story. This is as close as anybody is going to come to breaking that rule.

Phantom Lady is just awful as a super hero, isn't she? She let's her poor friend be strangled to death -- in front of her!! -- and left her boyfriend struggling with multiple guys with knifes, to, what, save her secret identity?

Who couldn't possible know? How many big-breasted, long legged, Betty Page hair cut woman with exactly the same face exist in that town?

Here's another idea: try to sneak up on the bad guys. Driving all over town in your big noisy car sounds like a bad idea.

The pin-up on page 8 screams Jack Kamen, doesn't it? They were both at Iger, I don't know enough about that history to wonder what the connection might be in style.

Brian, astute observations on the story, as usual. Thank you.

As for the Kamen panel, on these shop jobs I think various artists worked on them, with Matt B. probably drawing most of the Phantom Lady figures. Phantom Lady on the cover looks to be Baker, but I don't know about the rest, background figures, etc.

I do think about stuff like that, who does what, but if I think too much my head hurts. And it's hurting now. I'll go take a couple of aspirins and lie down. I'll see you again on Sunday.

I really wish that there had somehow been a superhero whose range had spanned every comic-book universe, and who had been tasked with punishing ostensible heroes who had dropped-the-ball when it came to protecting the innocent.

The story was both re-written (to tone down violence) and redrawn (to tone down sexiness) during Phantom Lady's later Ajax/Farrell run by the Iger studio crew.
You can see it here...
http://heroheroinehistory.blogspot.com/2012/05/reading-room-phantom-lady-what-price.html
(Quite a few of PL's Ajax/Farrell stories were re-dos of earlier Fox tales, and, in one case, a reworking of a totally-different character's story!)

I think we can put to rest the myth that Baker drew the cover to PL 17. It looks exactly like Al Feldstein's art and nothing like Baker's, as a look at authentic Baker art will attest. He never drew women with balloon breasts, but Feldstein did.