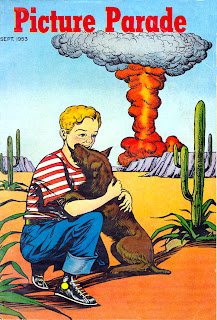 
It's Thanksgiving Day in America, and the day I give readers around the world the bird. The bird would be a turkey, the traditional centerpiece of the Thanksgiving family feast, and also a Turkey Award, which is for the most oddball, screwiest, dopiest and otherwise whateveriest a story is to make it stand out in my mind over all the other oddball, screwy and dopey comics I read every year. You see, the Turkey Award is purely subjective, it's my choice. You don't get a vote. Here's why I chose this year's winner:

I grew up a baby boomer, meaning I was born a couple of years after World War II ended. In the early '50s we had "duck-and-cover" drills in school. In the event of an atomic attack by the Russians we would get under our desks to ride out the blast! You might have seen the old instructional films that are so funny nowadays, but at the time, at least to me, all seemed perfectly reasonable.

The problem is that the United States government, and anyone who could read, already knew that ducking and covering wasn't going to do us any good at all. Follow-up studies in Hiroshima and Nagasaki showed that when an atomic bomb went off over your city, better bend down and kiss your butt goodbye. No school desk would protect you. Efforts to make the atomic bomb seem less dangerous, when everyone knew it wasn't, was all a terrible lie told to us kids. It was probably done in a misguided effort to make us less fearful, or for whatever other arcane reasons, but it was wrong.

Andy's Atomic Adventures is of that era. Originally published in 1953 as issue #1 of Gilberton Publishing's Picture Parade, it came out when I was in first grade. The copy of the story I scanned is from a reprint, The World Of Science, which came out in 1957. It is an out-and-out propaganda job, and worst of all, at the time I believed it. I'm a lot more cynical nowadays.

Something that leapt to mind while re-reading it was, if Andy and his family live 30 miles from the Nevada test site, how did Andy get from his house to the test site on his bike, and expect to get home before dinner? The second was, Andy's dog, Spot, was in the blast zone and survived, and when the radioactivity went away was allowed to come home to Andy. Jeez, the poor dog would've lost all his fur and died a horrible death from radiation sickness. My guess is, unseen to children reading this comic, it took a couple of weeks for the test site people to find a replacement for Spot to fool Andy.

Did I mention while all the rest of this is going on that radioactive treatments cure Andy's mom of her unspecified (but obviously cancer) illness?

The story is drawn by Pete Costanza, who had come from drawing Captain Marvel Comics at the recently (remember, this is 1953) defunct Fawcett Comics, and later went on to ACG. Andy's Atomic Adventures, drawn in its simple, clear style, was a lie, whether perpetrated at the behest of the United States government, or of the publisher's own volition, and is Pappy's 2011 Thanksgiving Turkey Award winner with a solid three radioactive turkeys. 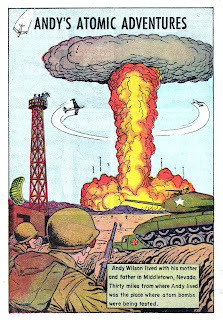 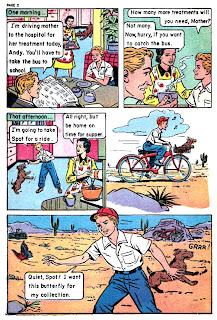 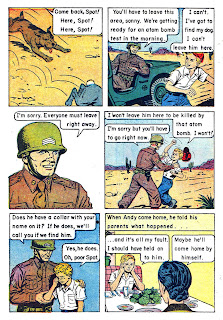 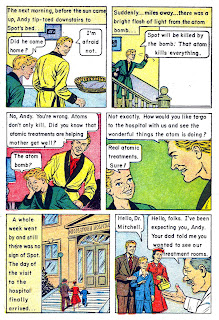 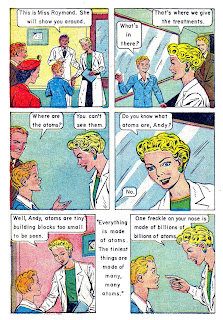 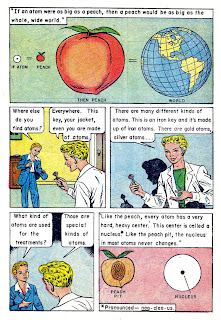 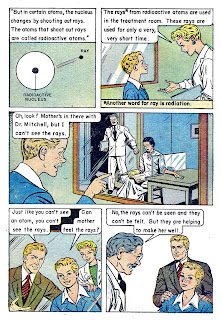 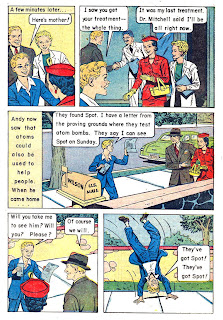 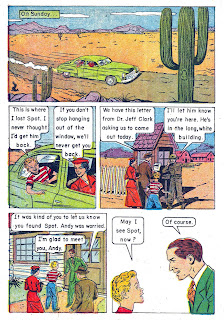 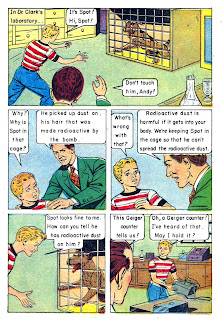 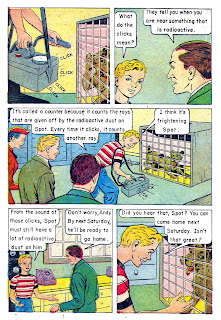 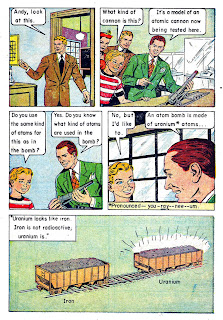 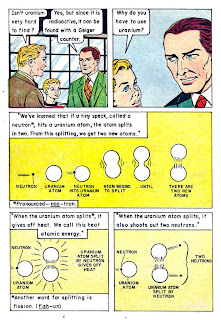 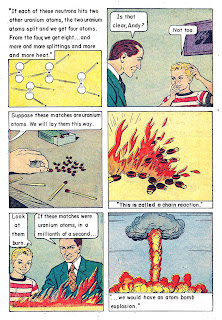 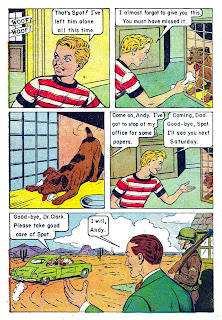 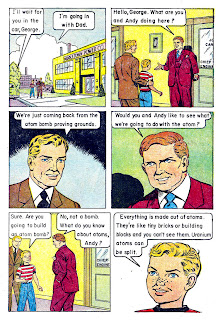 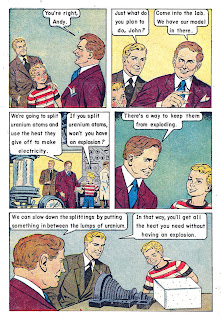 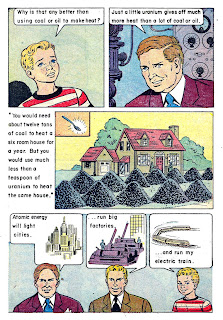 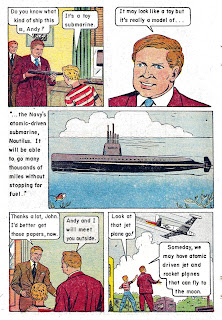 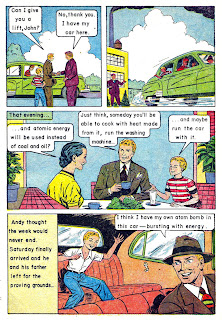 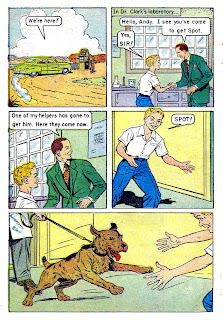 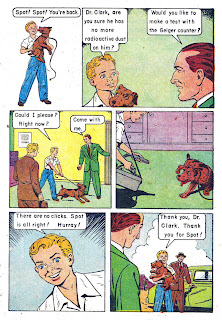 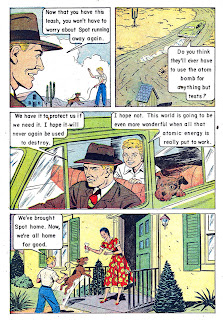 This is the sixth annual Turkey Award presentation. You can view the others by linking to them:

There's a story in the 1972 sci fi anthology "Again, Dangerous Visions" that features a pet dog getting accidentally napalmed during a weapons test. I can't recall it clearly (can't even identify the title or author), but I think the dog runs into the danger zone after a rabbit. Could be a coincidence, but this reminded me of it.

Thanks for a great turkey!

Thanks, Cy...it's been since at least 1972 that I read that anthology so I can't remember the story, but Andy's Atomic Adventures may have had some of the inspiration. There were a lot of copies around during the '50s.

Thanks for the turkey, Pappy. Man, these people all look so creepy--I guess the artist never quite noticed that when real people smile it pushes their cheeks up and squints their eyes. These people all look like ventriloquist dummies. Any page from this story would make the best captioning contest.

Yeah, man! That is just one strange reading experience. Oddly compelling artwork, offset by weird ass propaganda designed to mute the real facts, and spoon fed to the gullible masses.

Chuck, there are people called downwinders, who were in the path of the fallout when the bombs were tested in Nevada. Many of those people developed thyroid cancer, there were birth defects in the area, etc. All of that was going on when this propaganda comic was published.

I'm angry with a government that uses its own people as guinea pigs, but in those days a few thousand rural citizens were less important than an overall concept of national defense.

On that happy note, y'all have a nice Thanksgiving, everyone?

Spot has mutant puppies and the govt experiments on them.THE END

How did spot get cleaned up? Did he clean his fur with his tongue?