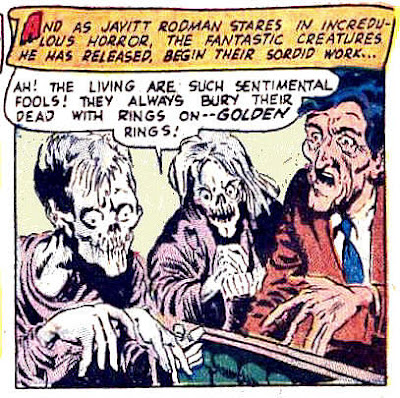 The unlucky “Guest of the Ghouls” is a man (a bad man, because this is a horror comic) who steals tombstones. Tombstones! What would someone do with a tombstone? I know about collectors, especially comic book collectors, but I’ll be in the ground with dirt being shoveled over me and still not understand what one would do with another person's tombstone. They get very bulky, and heavy.

Oh, yeah...I did say it is a horror comic, and logic flies — in bat shapes perhaps? — out the window  in a horror comic. The walking dead also have evil deeds of their own, but they get after Javitt Rodman, because as one of the ghouls says, “You have robbed the dead of their only identity after death, their tombstones!”

Saying something positive about the story, artist Sid Check, using his best Wallace Wood imitation, does a good, creepy job with the corpses. It is from Beware #7 (1954). (Mr Karswell showed the story in 2009, so it is time to show it again. I swear I did not steal his scans.) 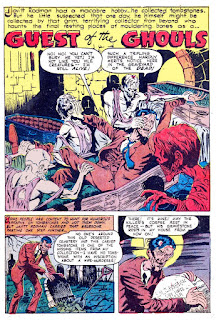 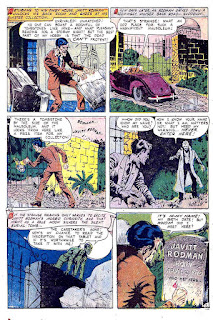 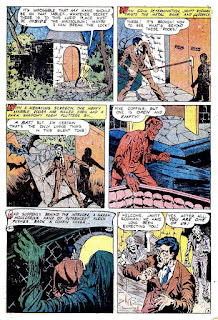 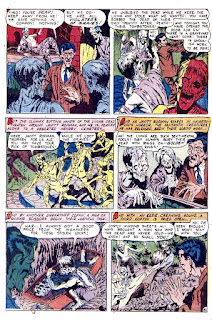 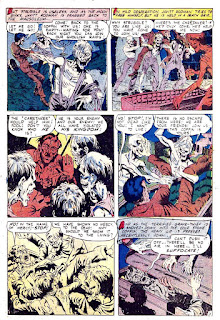 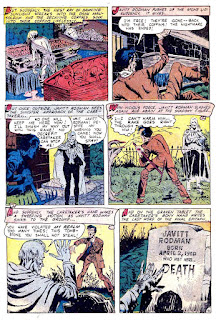 A couple of my favorite Sid Check stories here. Just click on the thumbnail. 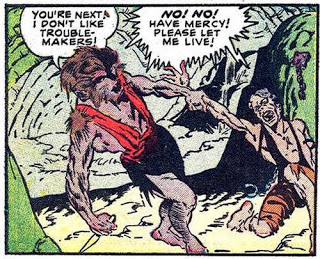 Death is a real snappy dresser!

Note to self: Never blow off mysterious disappearing folks who know your name and give you warnings!

Of all the things that might warrant death, archæology of that sort seems a particularly implausible offense.

I've not made much practice of visiting cemetaries, but I've observed that tombstones crumble and break, and sometimes family members do little or nothing about this entropy, even as they live within walking distance and as they continue to bury relatives in nearby plots. Immortality is not to be found in the graveyard.

Brian, when encountering such warnings, my standard procedure is to go home and cower in the darkness. You may scoff, but it has worked for me.

Daniel, when I visited the Evans City, Pennsylvania cemetery (where scenes from Night of the Living Dead were filmed), I wondered if anyone, doing the tourist thing like me, were tempted to chip off pieces of tombstones for souvenirs? I had no hammer or tool, just my teeth, and that's a no-go. I need those for eating the brains of the living, bahahaha!