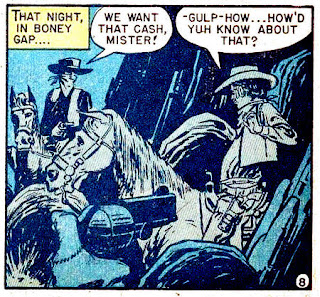 Artist Johnny Craig joined the EC gang early on, like fellow artist Graham Ingels, editor/writer/artist Al Feldstein, and of course, William Gaines, who had inherited the job as owner/publisher when his father died in 1947.

Later on, as EC grew in popularity and sales, biographies were published of the individual artists. The biography of Johnny Craig on the last page of “Colorado Rose” looks to be a warm-up for the later biographies. (I can’t tell you if this was the only one from the early, pre-horror comics EC, because I am too lazy to look it up. How is that for not doing my homework?)

Craig was a good artist, but according to even Craig himself, he was slow. Later on he both wrote and drew, showing his talent at both, and even took over as editor of The Vault of Horror. Except for the sharp illustrations, “Colorado Rose” seems like a standard early EC story, which followed the trends of the rest of the comic book industry with  a Western comic to go along with a couple of crime comics and even a love comic.

I appreciate the artist biographies more now, because those were the days when comic books were under siege by Dr Wertham, teachers and parents, and later even the Congress of the United States. Guys like Johnny Craig, as well as the rest of the gang, could have chosen to remain anonymous, but they signed their work. Considering the times, I think Craig and his fellow artists were brave. 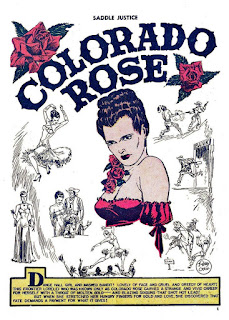 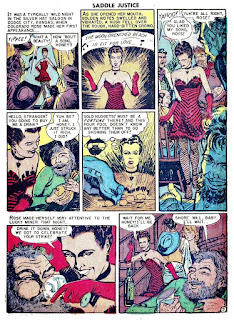 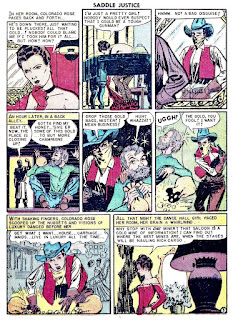 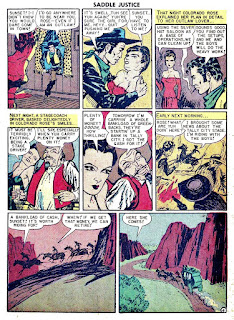 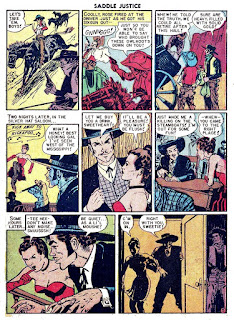 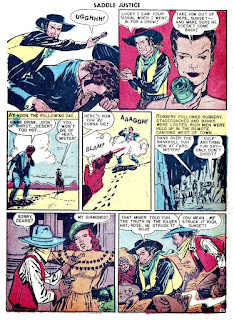 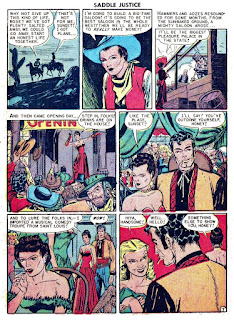 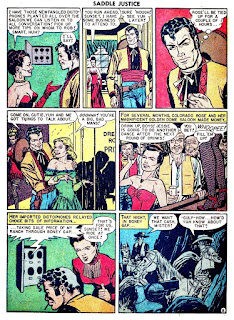 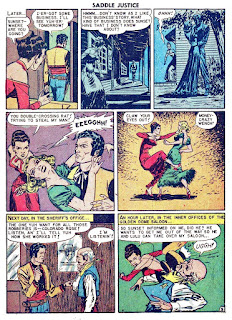 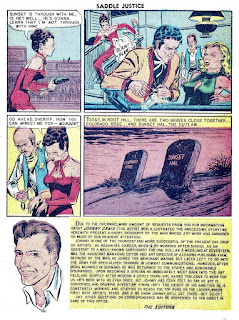 Given what some studios and publishers did to hinder their artists from leaving, I applaud EC's advertising their artists. Partly, my reaction is in belief that EC should have done that in almost any case; but, also, I think that it were a wise business move, as it could attract talent. And perhaps it was one of the reasons that EC indeed got some extraordinary artists to work for them.

I seldom see Craig's work from before that on the horror comics, and I admit that I wouldn't have thought of him if I had looked at most or all of the panels of this story. I associate him with a very lean style.

The idea that Rose just happened to have all the necessary elements to costume herself as a masked male bandit was rather implausible. (And then, after all, she struck her first victim from behind, such that the costume proved to be rather superfluous!) A greater problem with the story is in the practicability of the listening devices. Telephony in that era required one to speak very loudly or even to shout.

Mean, people that careless with their talk need robbing.

I know that birth certificates and other legal records could be inexact or hard to come by in those days(*) but it's kind-of hilarious that the gravestones have no dates and only the noms de guerre "Colorado Rose" and "Sunset Hal". (*also that this is comics)

Arben, those tombstones look like the kind in the Tombstone, Arizona Boothill!

Daniel, maybe it would have made more sense to go outside, lean over the fence and holler what you would have to shout over the telephone. My dad, Big Pappy, didn't mention what the telephone sounded like in the mid-'30s when he was calling his girlfriend -- and a decade later my mother -- with the phone number, 7. Of course, they lived in a very rural area, and he estimated that he could have walked to her house in the time it took to raise the operator to give the number, and the brothers and sisters who got to the phone first and razzed him before handing the phone over.