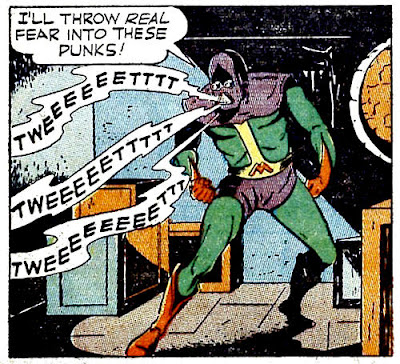 Micro-Face, created by Al Ulmer for Hillman’s Clue Comics, was yet another short-lived costumed, gimmicky hero of the World War II era. Here's what Public Domain Superheroes has to say about Micro-Face:

“Tom Wood was a factory worker and a failed inventor. Years ago, he invented a "Micro-Mask" - a full-face mask that contained a built-in microphone (which allowed hm to amplify and throw his voice), a hearing amplifier, and ‘photoelectric lenses’ that gave him x-ray vision. He could also attach telephone wires to his mask to make phone calls.” The desire to carry a telephone on one’s person has come true.

I admit to being intrigued by the character’s name, originally picturing him as being along the lines of a Dick Tracy villain, with a tiny face planted on a normal-sized head. Not so.

Both Micro-Face’s name and his powers are at least unusual.

I couldn’t resist showing a panel of Micro-Face tweeting (above). “Tweet” is a word that in our era has taken a new meaning. 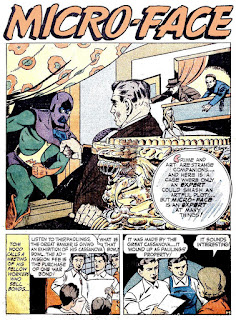 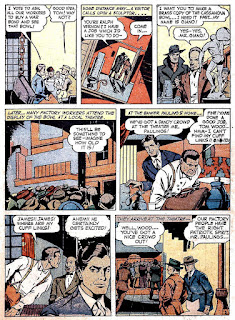 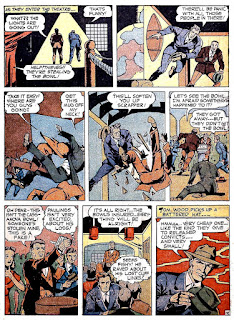 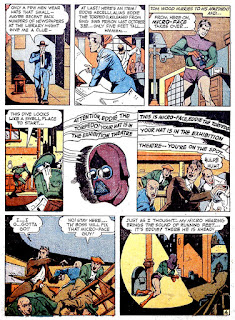 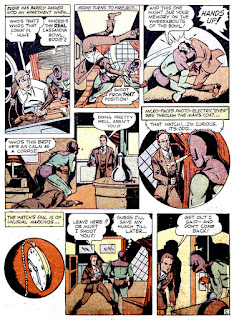 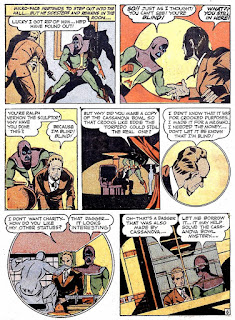 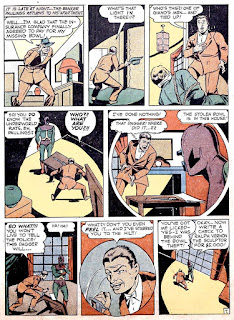 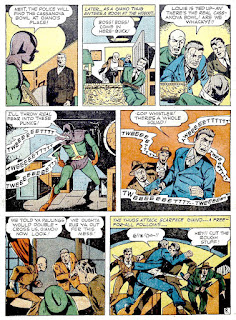 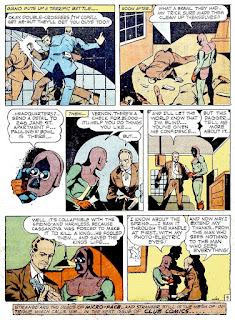 Dick Tracy had Littleface Finney as a villain! He had a little face on a big head...

This is what happens when you run slap out of ideas. A worthy companion to the Green Turtle.

OK, it's silly beyond belief, but I'm giving them credit. They tried something interesting. Now if it could have been used as more of a weapon, it might have been more successful. He ends up just being another brawler, and basically used the audio tricks to make the bad guys fight themselves, which doesn't make the best action scene.

Still, an interesting super hero side alley from the 40s!

This would make a good continuing series, like your crime series.

Brad S., aha! I thought I had seen Littleface in Dick Tracy. Thanks for telling me my memory isn't totally faulty.

Fred Azbell, I wonder if by that time in comic book history all of the good ideas had been used up? At least Micro-Face had an unusual gimmick. I don't think any other costumed characters used a microphone.

Brian Barnes, maybe it would have been better if he had packed a super subwoofer on his chest, or an amplifier that made his voice with a DB level like a jet aircraft taking off. That would make his gimmick easier for me to accept.

Out of the batch of heroes in Clue Comics, it's Zippo who makes me laugh hardest. His gear consists of two independent rod-and-piston rigs (one on each leg) that rev the wheels on the outside of each foot to speeds up to 50mph. ...That's right, folks: his body is the chassis! In reality those things would tear his legs to bloody shreds before he had time to shriek. (Plus it's all powered by the same weapons-grade balonium that's still used today in stuff like Attack on Titan--the magic of compressed air!!) Compared to that, Micro-Face's techno-ventriloquism, Iron Lady's throat-crushing gloves, or Boy King's massive golem of Nostradamus are easy to buy into, and Nightmare and Sleepy's poverty-based superheroics are downright gritty in their realism.

Billy, since Clue Comics was published by Hillman, it might explain some of the more bizarre superheroes they presented. Maybe the same talent pool produced Rackman, who appeared for a time in Hillman's Airboy Comics. Rackman is akin to Zippo in gimmickry and silliness.