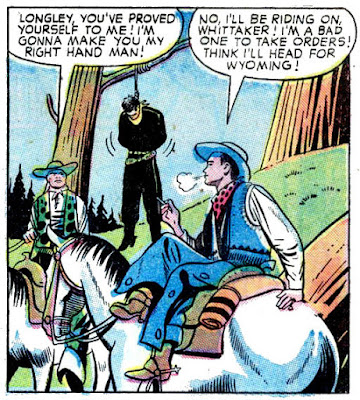 As is true of many Western outlaws and gunmen, some of the tales that have grown up around Texan Bill Longley are exaggerated and false. Longley was a murderer, an army deserter, and all-around bad guy, but he was not saved from a lynch mob hanging by a stray bullet splitting the rope, as shown in this story from Desperado #1 (1948). I have said several times that “true” is a floating concept in crime comic books, and when matched up with legends, the legends usually take over. Much more visual, you know.

Longley killed people, but his own boastful nature, inflating his misdeeds, probably helped do him in. He was eventually sentenced to hang. The detail missing from the comic book version is more gruesome than anything shown. The gallows were built, but the sheriff miscalculated how long the rope needed to be. Bad Bill, a six-footer, hit the ground, then was dragged up and strangled by the noose. It took 11 minutes before a doctor could pronounce him dead.

The 1948 version, drawn by Fred Guardineer, was published decades before the eventual true outcome of Bill Longley’s story. His grave was located and his remains confirmed by DNA testing in 2001. That part of the story, with the science involved, is taken for granted by us nowadays, but in Bill Longley’s day would have been wilder and more improbable than any of the stories told about this Texan badman. 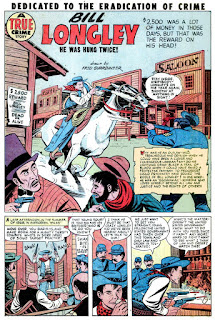 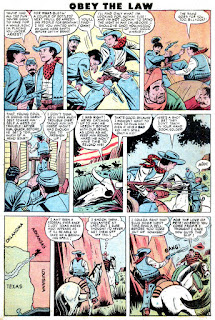 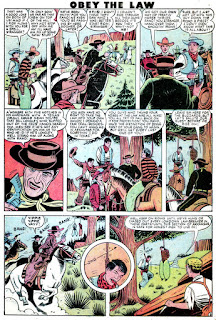 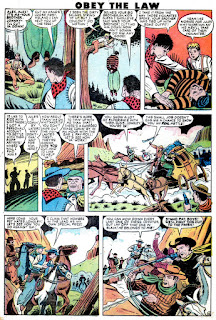 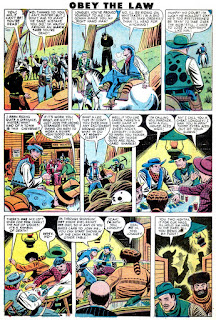 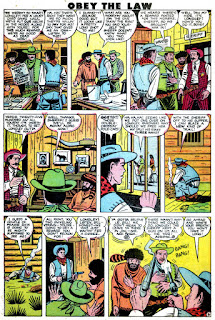 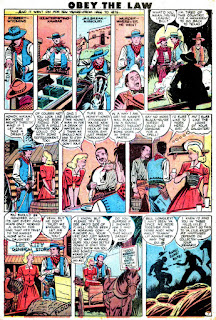 This one really plays up the "no honor among thieves." The amount of double-crossing made my head spin!

Hanging wasn't and isn't what most people imagine it to be. The long drop was introduced in the UK, in 1872, and not to spare the prisoner but to spare the witnesses. The breaking of the neck doesn't cause instantenous death, but unconsciousness and paralysis; the victim is still typically strangled. However, when done according to protocol, it usually takes about three minutes.

Longley's execution was in 1878 in the US, so it almost certainly wouldn't have been planned as a long drop, which would partially explain a miscalculation, and why it would be regarded as acceptable to strangle him by hauling him upward. Of course, even a short drop helps to tighten the noose; Longley's noose was less constricted.

Here in San Diego, Yankee Jim Robinson, 6ft 4in, was hanged from the gallows in 1852. His toes reached the ground, and it took about 45 minutes for him to die. His crime, BTW, was attemped theft of a row boat.

Well, I'm glad that Yankee Jim was at least executed for something that serious.

Good Lord, what would they have done if he had murdered someone? Eviscerate him while he was still alive?

Well, gee Brian, you'll get dizzy from all that spinning.

The uncredited writer (Dan Barry? Ken Fitch? Claude Moore?) should have had a ready reference like that!
Thanks!

Darci, hmm. Some of the other sites I have consulted call that shooting the hanging rope a myth. So now I don't know what to believe, except that the tale sounds too good to be true. The grave is obviously real. I probably won't be in Texas anytime soon, so I'm glad you sent the link.