Number 1878: The Fantom and the Big Robot 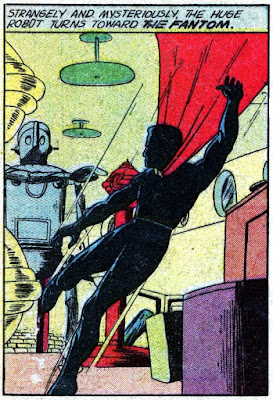 Any information I have on the Fantom of the Fair comes from an informative entry in Don Markstein’s Toonopedia website. Quickly, though, the Fantom is one of the very first non-DC superheroes to appear in comic books (Amazing Mystery Funnies Vol. 2 No. 7, July 1939) after Superman...Fantom was never shown with a secret identity, no origin story, no reason given for doing what he did...lived in a lab under the New York World’s Fair, protected Fairgoers. Later he was renamed Fantoman and earned his own short-lived comic book, but then Centaur went out of business and it was goodbye to the guy. He was probably created by Paul Gustavson, who went on to a prolific career in comics of the forties.

Today I have a story of the Fantom protecting those Fairgoers from a giant robot. And really, that is almost my sole reason for showing it. Historic or not, in my mind the Fantom is secondary to a huge, clanking, stomping, havoc-wreaking mechanical man. Paul Gustavson gets the byline for drawing (and probably writing), and Frank Thomas gets the honors for drawing the dramatic cover. 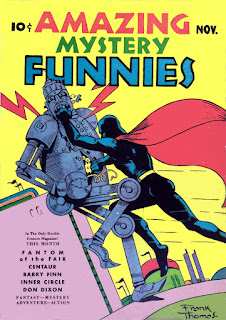 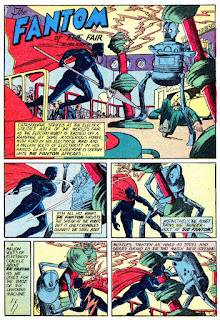 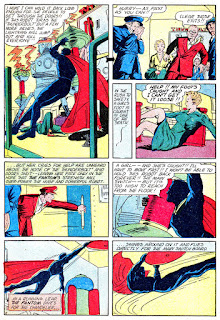 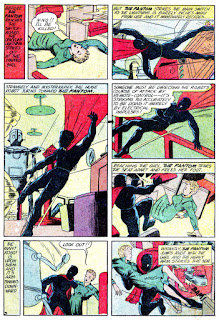 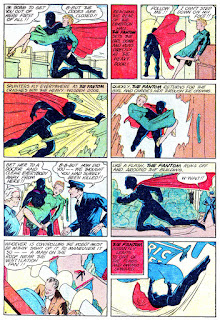 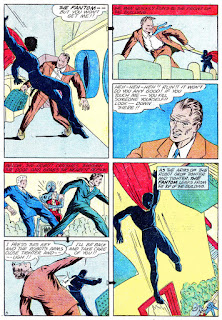 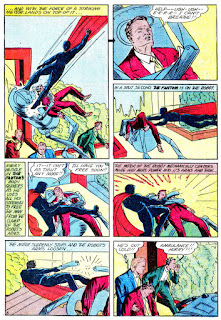 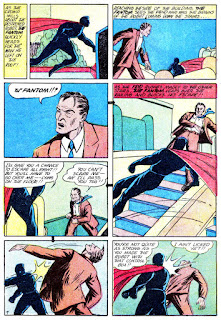 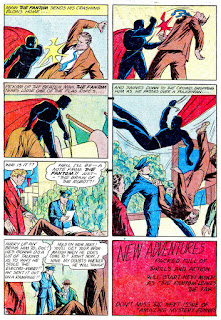 I suppose that most kids who then fantasized or now fantasize about having heroic abilities — whether they be superpowers or something within the observed range of humanity — probably don't give a lot of thought to what would bring-about a need for their exercise. So a madman just does set robot to killing or somesuch, as in this story.

Gustavson's work of course became much slicker, but we see some indications of what was to come, especially in his rendering of the girl who was trapped. (See also the fleeing woman in 2:2. I reïterate my theory that many comic-book artists mostly just wanted to draw dames, and so do a better job of that than other things.)

The Fantom doesn't look like much of a challenge to draw, and that was probably deliberate.

The cover is slightly upsetting. The robot is looking at us, it's eyes seemingly pleading for help as the Fantom rips into its insides. I almost feel bad for it.

That was an unusual start, opening the story en medias res with no build up or scene setting, not even a motivation--just the Fantom confronting an attacking robot. Weird.

You know what would've been really cool? If the Fantom didn't talk at all. He wears a full mask, he has no identity or background, and, as you wrote, Pappy, he expresses no motivation for what he does. Making him mute would've completed the mysterious air about him.

Sly little ending there: the subtle implication being that the Fantom may have killed the "fiend."

I appreciate the approach of making the Fantom all black, but I don't think it works very well. It works well for other characters with modern comic printing and coloring, but here, against the bright backgrounds, it just looks muddy.

That said, unlike a lot of early superhero stories, there's a lot of action (all absolutely unexplained, at least throw in "enemy agent" or something!) and the art is dynamic enough.

I did grumble when Fantom and "the girl" were stuck behind the door and she goes "oh, my ankle, I can't do anything!" while a giant, crushing metal robot was coming for her. Now is not the time to whine!

1939 was also when the famous Electro appeared, it's hard not to believe this story wasn't connected.

Ryan, has the "mute, no-motivation, mysterious air about him" hero already been done? Seems familiar. But I like the idea.

Police Commissioner: Say, Tuesday that mute guy in the black costume and mask killed a room full of people, and today he is playing with children in the cancer ward. What's up with him?

Detective Lieutenant: I don't know, Commissioner. No one does. That is why they call him (dramatic pause) MR UNPREDICTABLE.

Daniel, and a lot of guys like looking at those girls those artists wanted to draw. I went to art school. One thing I knew about art when I wanted to be an artist is that guys got to draw chicks...sometimes NAKED CHICKS! Not me, though. Not in my school. (For nude models I had Playboy magazine. Not quite as exciting as a live model but far cheaper.)

Brian, if I'd have known about Electro I would have included him. It was obvious he was the springboard for the robot in the story.

Thanks for bringing it to my attention.

Should we assume "the brain of the robot" went mad from working at Westinghouse and decided to wreak havoc on Electro's fans? There was a performer onstage with the real Electro (he conversed with the robot via a microphone strapped on his chest), but I've never been able to document his name.
Thanks!

OMG Pappy its tha Phantom w/Superman's cape but mix-spilled & colord black so he can get drawered fasterer LOL #BADASS Thats Y it duznt nead a origin or xplanation Yay! Paul Gustavson was 23 wen he did that wich is old 4 a cartunist in 1939 LOL Frank Thomas was 25. Phantom by Lee Falk started 3 yrs B4 "Fantom" so I say "smokering gun" yo!!!!

Obviusly I leaveded Pappy speechless. Oh BTW our Devo single is out. Deb spended all day tryering 2 write a press releese but do u C a press releese? Still no press releese. I tollded her 2 hire a smrt boy 2 do it 4 her