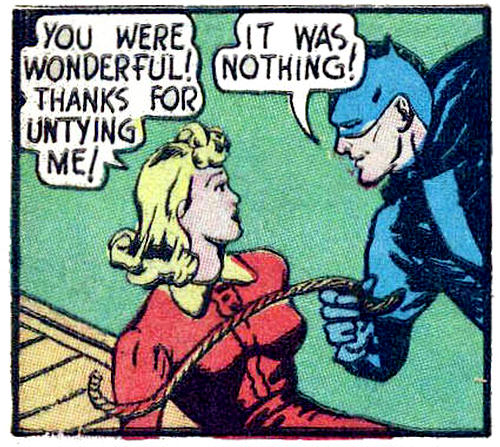 When I saw the Pete Nebird byline on this Black Owl story from Prize Comics #6 (1940), I did a double-take. Not that comic book bylines of the thirties and forties can be trusted, since pseudonyms were more the norm than exception, but Nebird is Driben reversed.* Peter Driben, the world famous pin-up artist, that is. One look at the artwork of the Black Owl story disabused me of any notion that Driben had anything to do with it. Here is a Driben magazine cover from 1938: 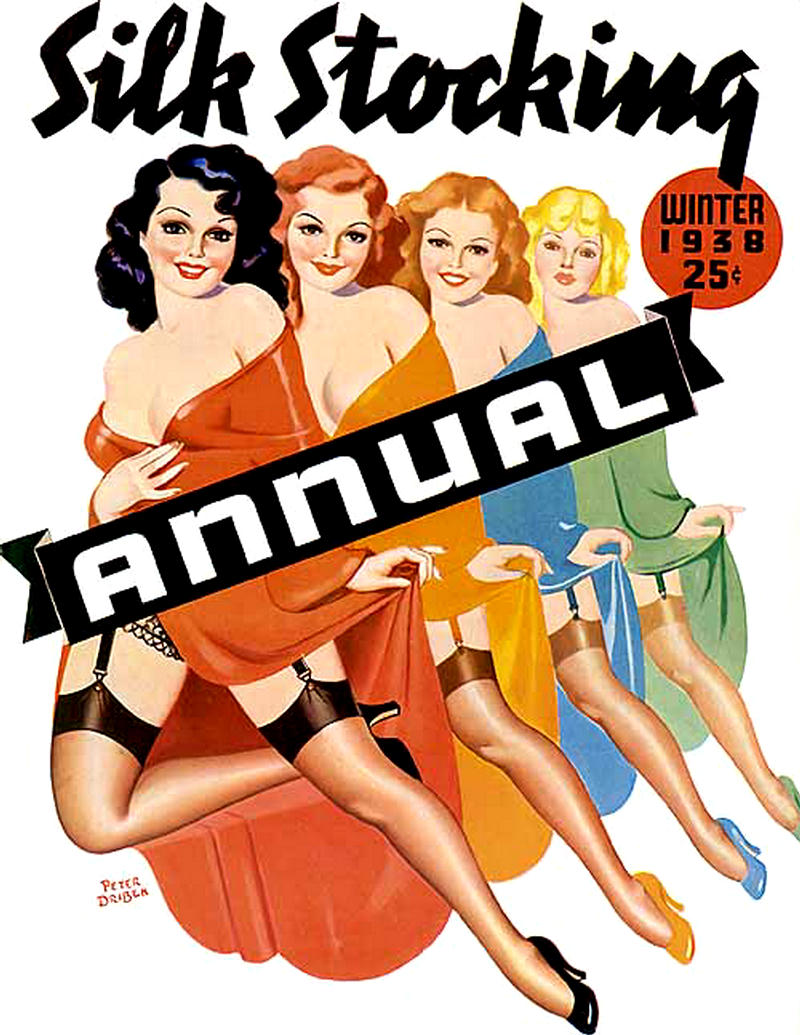 Going to the Grand Comics Database, they give credit for the Black Owl artwork to Pete Riss and Jack Binder. Mystery solved. Besides Nebird being Driben backwards, it is also an anagram of Binder. 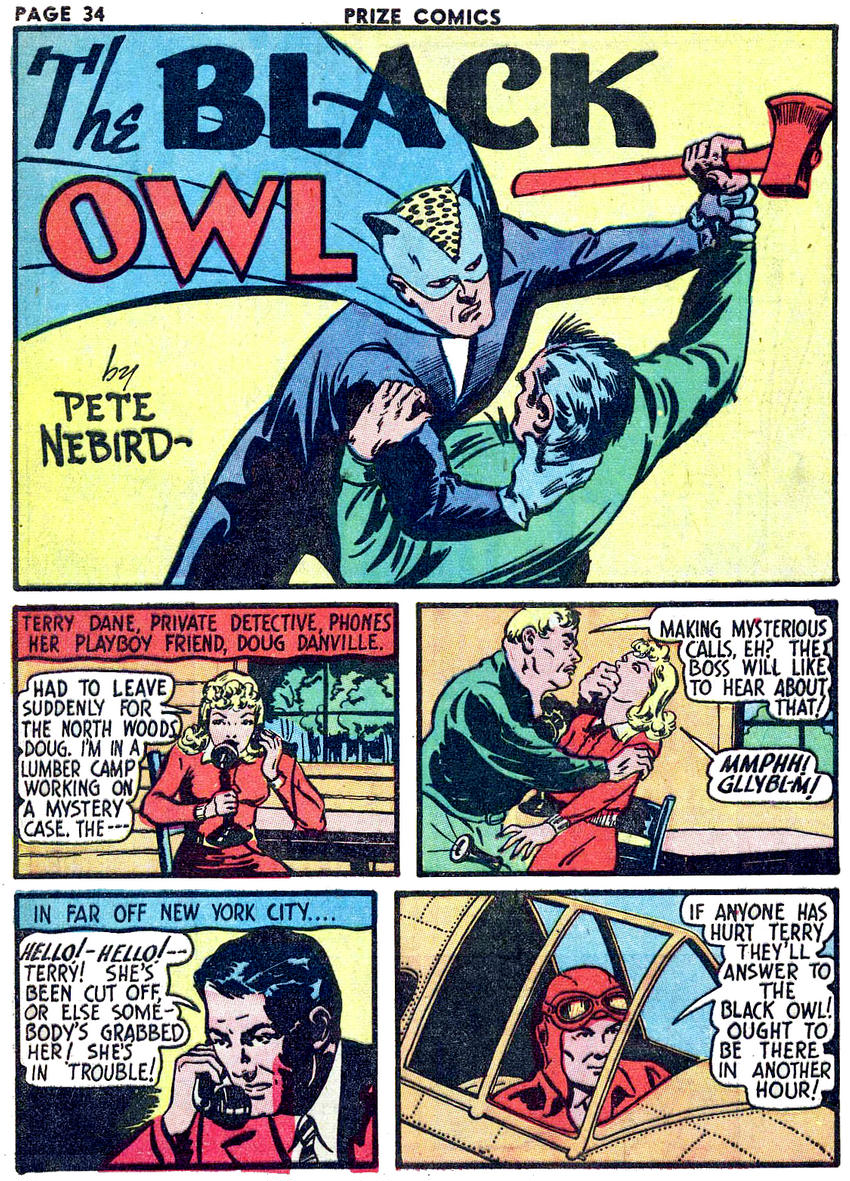 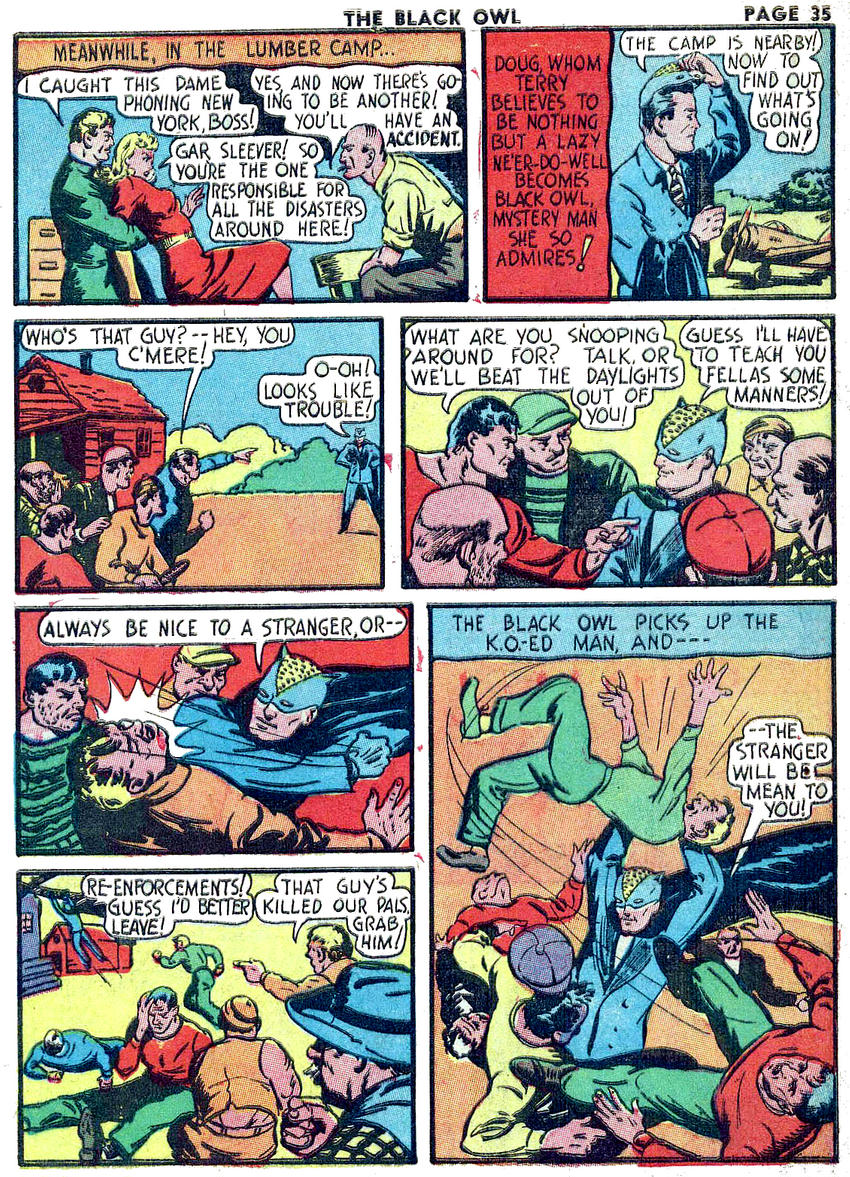 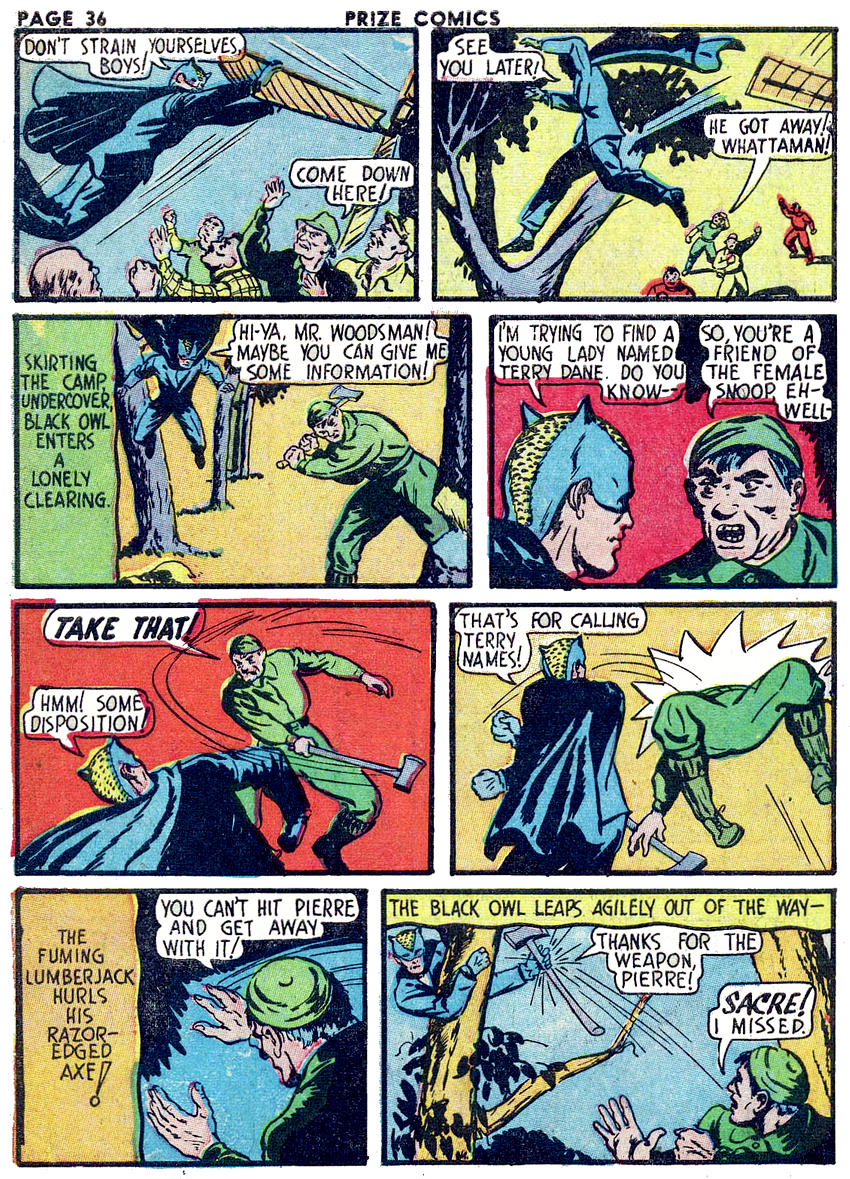 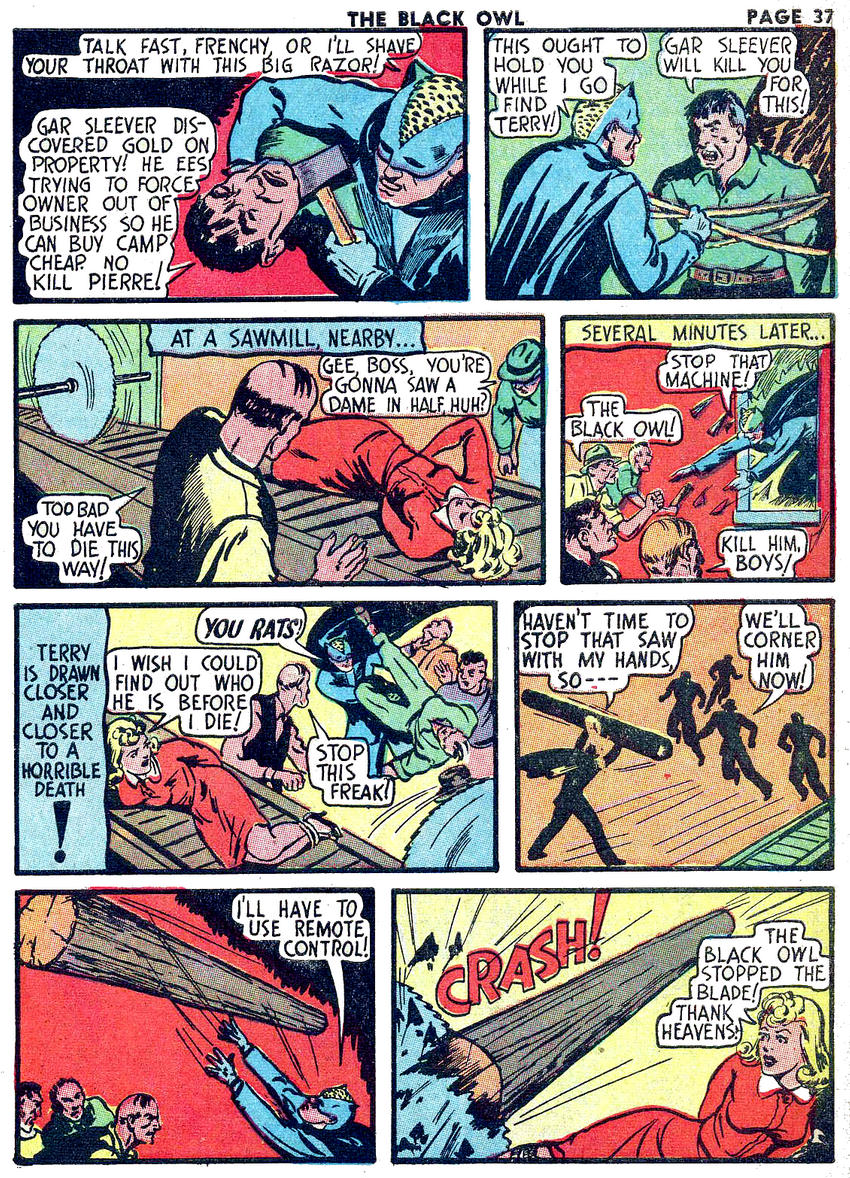 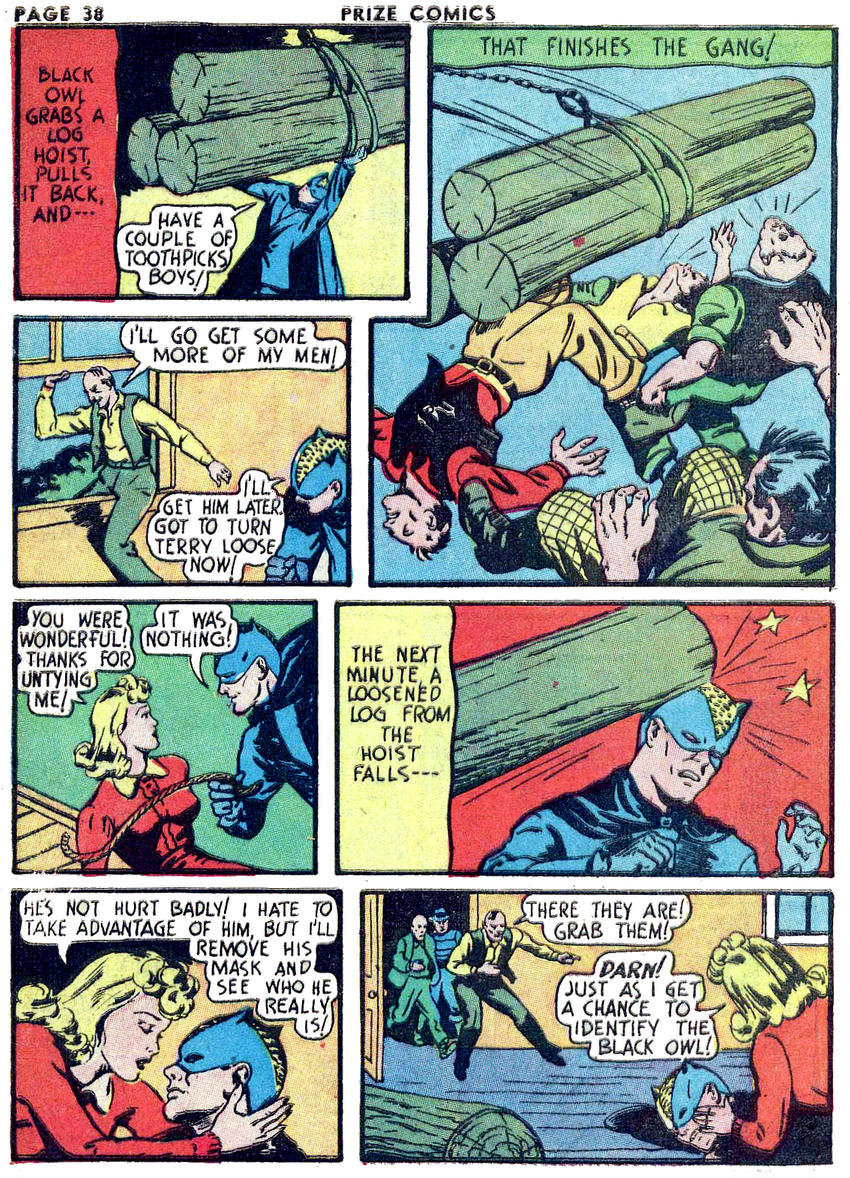 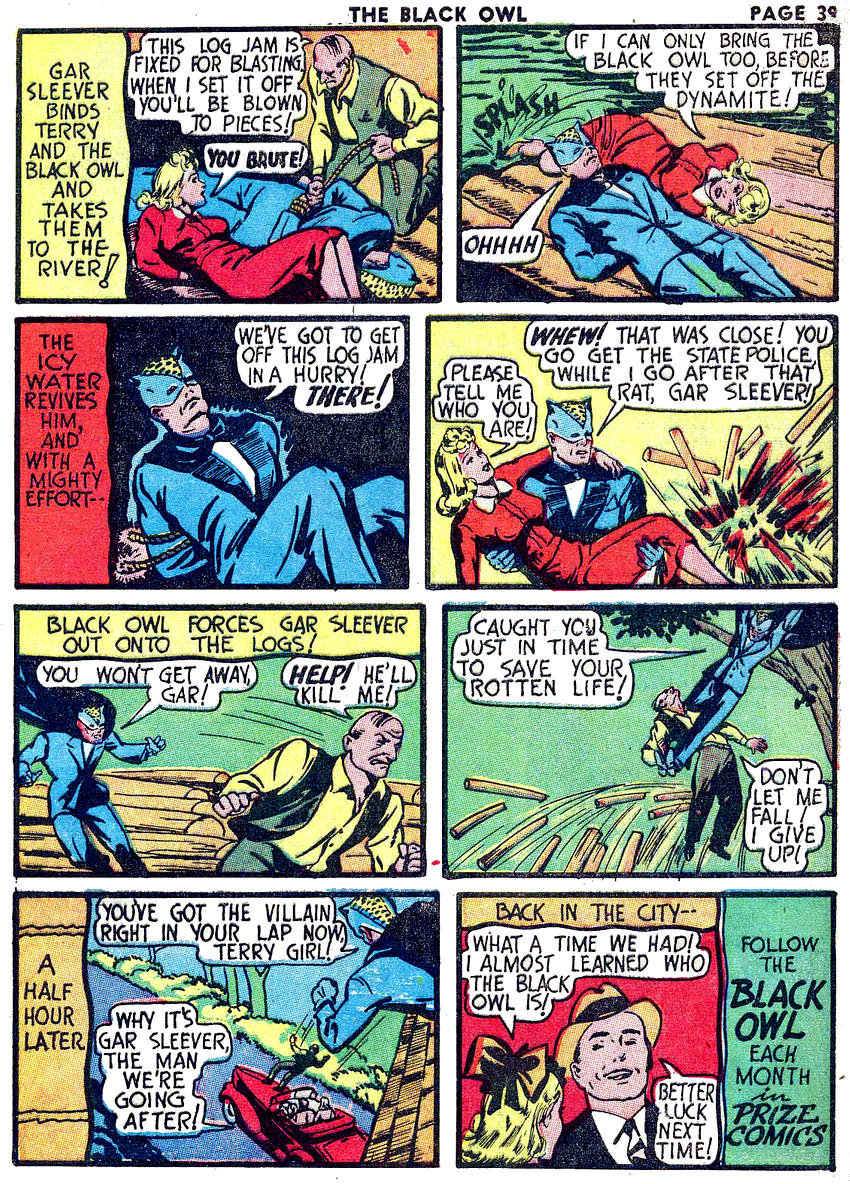 *It was the late Don Thompson who said (and I'm paraphrasing), comic book readers learn early on to read backwards.

That Black Owl is something! He can get a plane in the air faster than the henchman can get Terry from the phone to the boss, climb trees better than a cat, break ropes with no super-strength, and get people to call him "BLACK Owl" even though he dresses all in blue! Whattaman!

Ryan, I guess "Blue Owl" wouldn't have the sang ring of mystery as "Black Owl." (Also, there was already a character named the Owl in Popular Comics.)

In addition, by using the melodramatic device of tying a girl to the conveyer belt and the possiblity of being sawed in half, the Blue/Black Owl also rescued Terry from the oldest of clichés!

In theory, writing “Driben” backwards should have summoned him to aid the Black Owl in some way!

The idea of willfully exploiting a vulnerability in another created by that other having done the right thing is very deeply wrong. Quite seriously, I would never have a hero or heroine pervert the incentives. If we could get people to recognize incentives, and to resist their perversion, most of our present social failures would be ended.

Whattaman, indeed. A lot of clichés in this one and all the more amusing.
You are looking suave in your new blog icon with the sky blue-reflecting shades, Pappy.

Pappy, you do a great service, but I'm going to have to call the cops because this story is going to make people suddenly drop dead!

There's a lot of awful 40s superhero comics but this, by far, is the worse I've ever seen. My back teeth are still throbbing!

Aside from the confusing panel layout, the grade school level art, and the female detective that make's Lois Lane's secret identity obsession look positively prosaic, there isn't a single thing that makes logical sense in this story.

Of course, it's not a 40s superhero tale without our hero getting knocked out by random accidents.

Brian...I read this story three months ago when I decided to post it, and now thanks to your note I had to go back and re-read it just to compare it to your complaints. Well, you're right. I would add it is like a Popeye story...in the absence of other evidence, Black Owl just kicks ass until everyone around him is unconscious and can't get in his way. And Terry even wishes to know who Black Owl is before she is sawn in half! That's a curious gal! Not even a major concussion from a log slam on Black Owl stops her curiosity. She doesn't worry about whether he will have to be put into a medically induced coma or become a vegetable after such a horrific injury. Nothing else matters to Terry except finding out who he is.

7f7, it's a reflection of my monitor, but it is faked.

I went back to my 2008 photo because my more current pictures make me look like Grumpy Cat.

Well, Daniel, I don't disagree, but good luck on getting people to do the right thing.

Hi Pappy,
Since both the story and the art in this example drew such criticism, perhaps some day you'll present S & K's version of the character? See issues 7, 8, & 9 (Dec 1940 - Feb 1941).
I believe Terry continued in the series until Dan handed over the Black Owl ID to Walt Walters (when Dan was drafted}. AFAIK she never found out who the Black Owl was?
Thanks!

I think it's a funny story, stuffed as it is with so many cliches. I wonder when the old "buzzsaw" gag was used for the first time.
It goes straight from A to B to C: She calls him, he finds her, he punches them and save her: Popeye stories are usually more intricate. No explanation for the incredible strenght of this "whattaman" (a better superhero name than Black Owl I think).
"It's a bird.. a plane... No!... It's Whattaman!"
Only thing I don't like is the costume: the Phantom Stranger mixed with a drag queen. But I love the phrase "a lazy ne'er do well".

Thanks, Alicia. I would have baked myself a cake, but I'm trying to lose a few pounds before my annual doctor visit. So, here's a toast with natural spring water instead. Prosit!

J D, the sawmill scene was straight out of melodramas of the 19th century. "Marry me or pay the mortgage!" I don't know if it was actually used in any plays or early silent movies, but the cliché lingered on for decades. It is so corny I'm surprised they used it, even in a corny comic strip like this one.

In particular, the sawmill rescue had been first done in Joseph Arthur's 1890 play "Blue Jeans" - and was considered corny even then! The New York Times theater critic considered it "one of the defects of Mr. Arthur's play. It is not needed."
There was a film version of "Blue Jeans" in, I think, 1917, with Viola Dana.

By the way, it was the heroine who rescued the hero from being bifurcated by the buzzsaw, not the other way around - and he wasn't tied to the log (he was placed on it by the villain after being knocked unconscious).

rnigma, you are great and good, my friend. Thanks for doing the research on the history of deaths by sawmill!