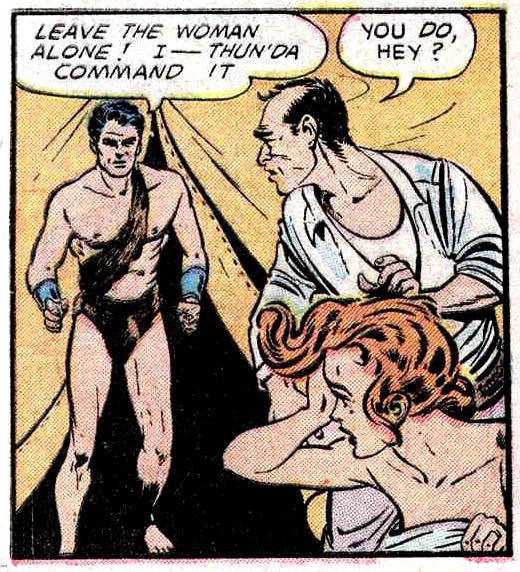 A paranoid man, a machine that turns living matter into gold, a beautiful woman, some opportunistic escaped killers, and Thun'da, King of the Congo, make for a heady mix of danger and greed in the jungle.

Thun'da was born of the pen and brush of Frank Frazetta and writer Gardner Fox. The character was handed over to Bob Powell and his studio. What had begun as a character in a lost land of dinosaurs soon turned into a more routine Tarzan-type in the fantasy jungle of the comic books. 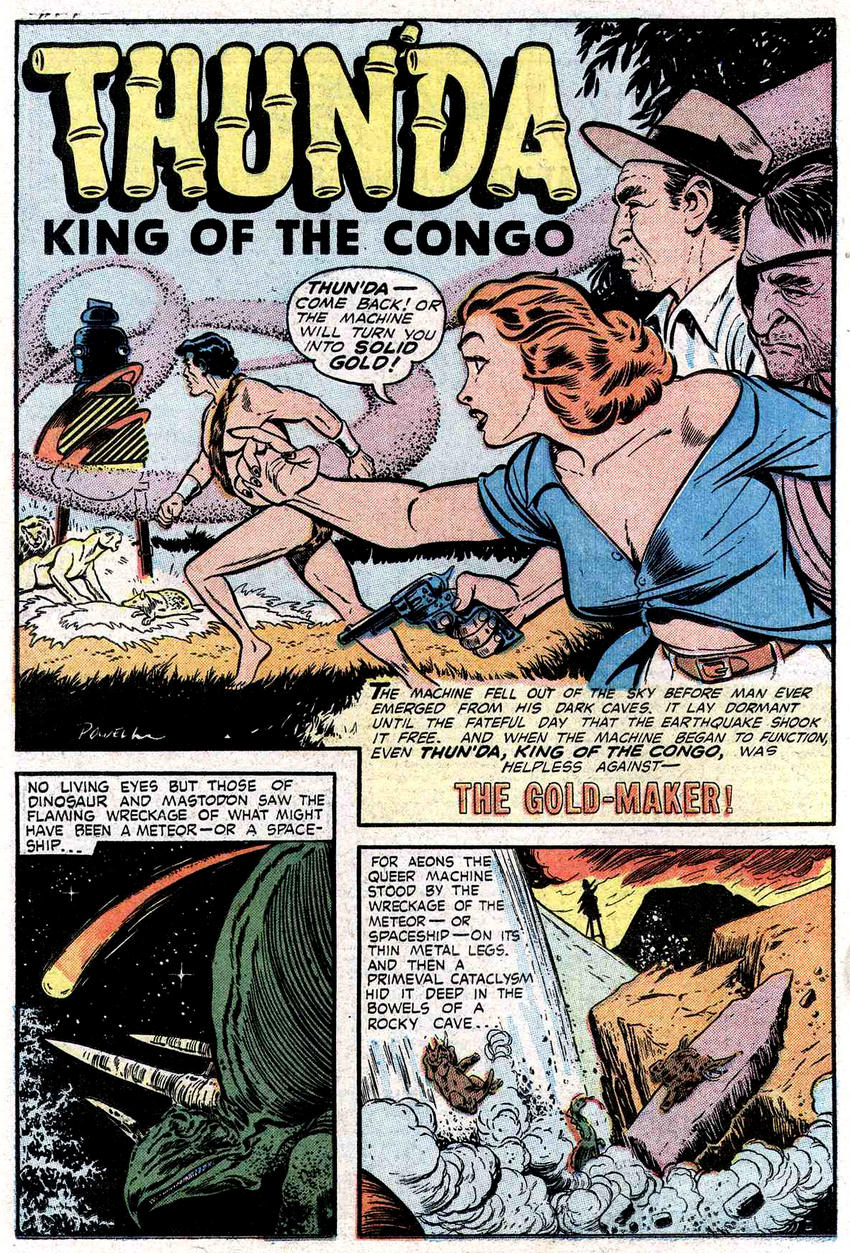 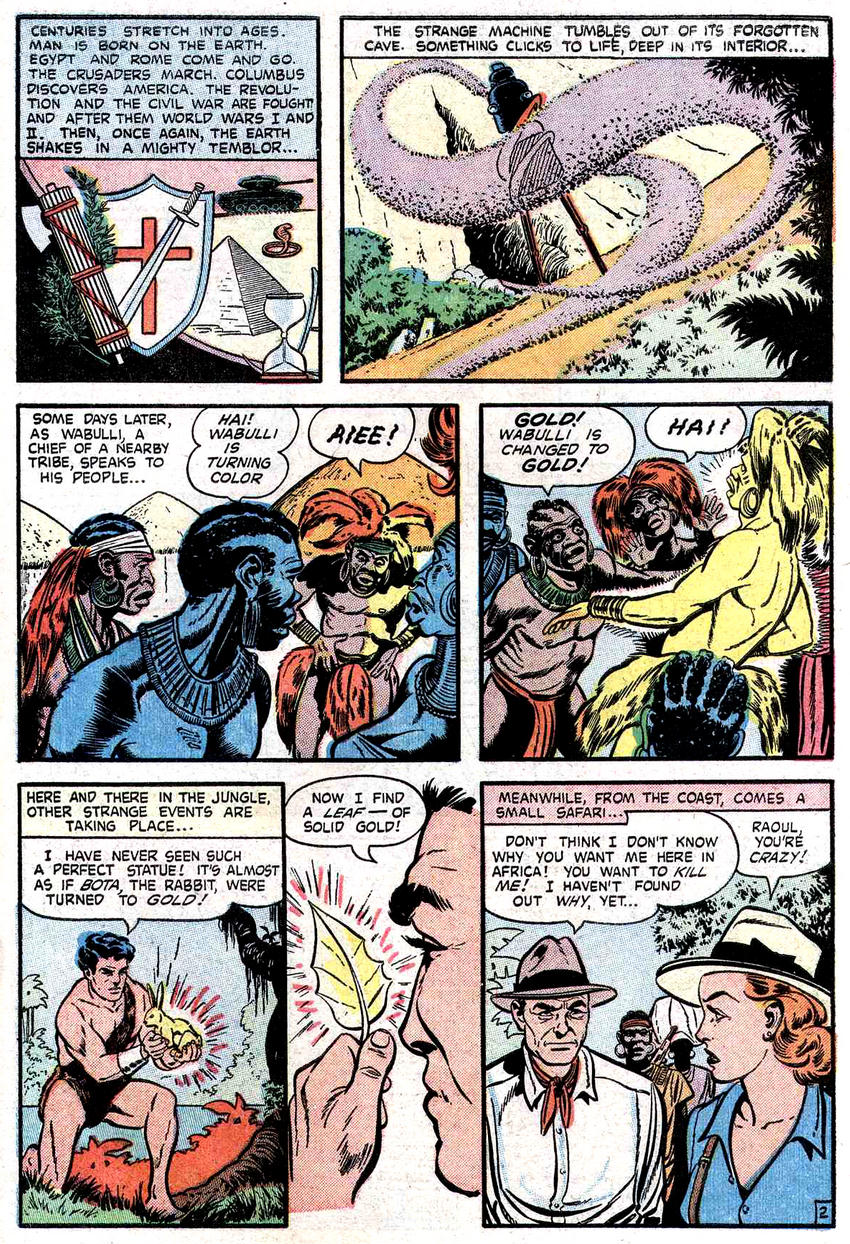 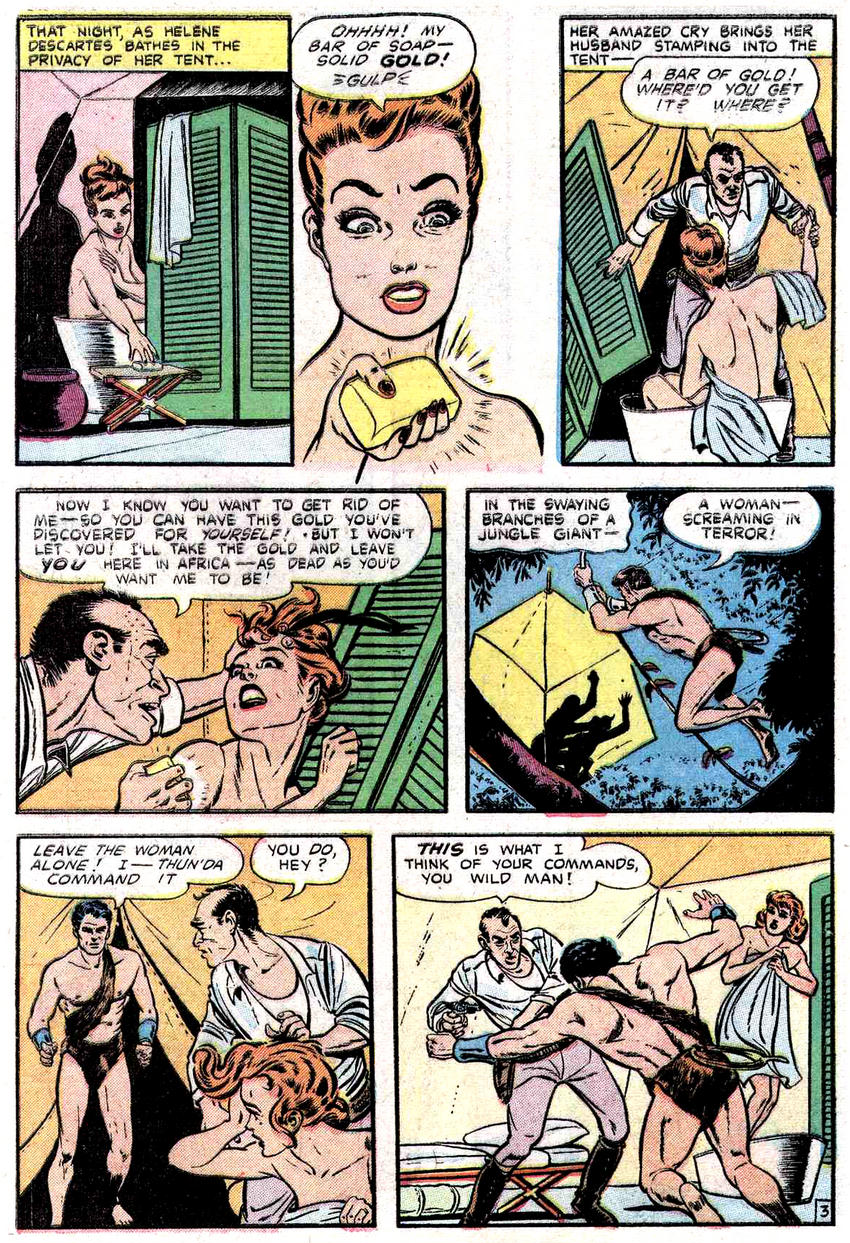 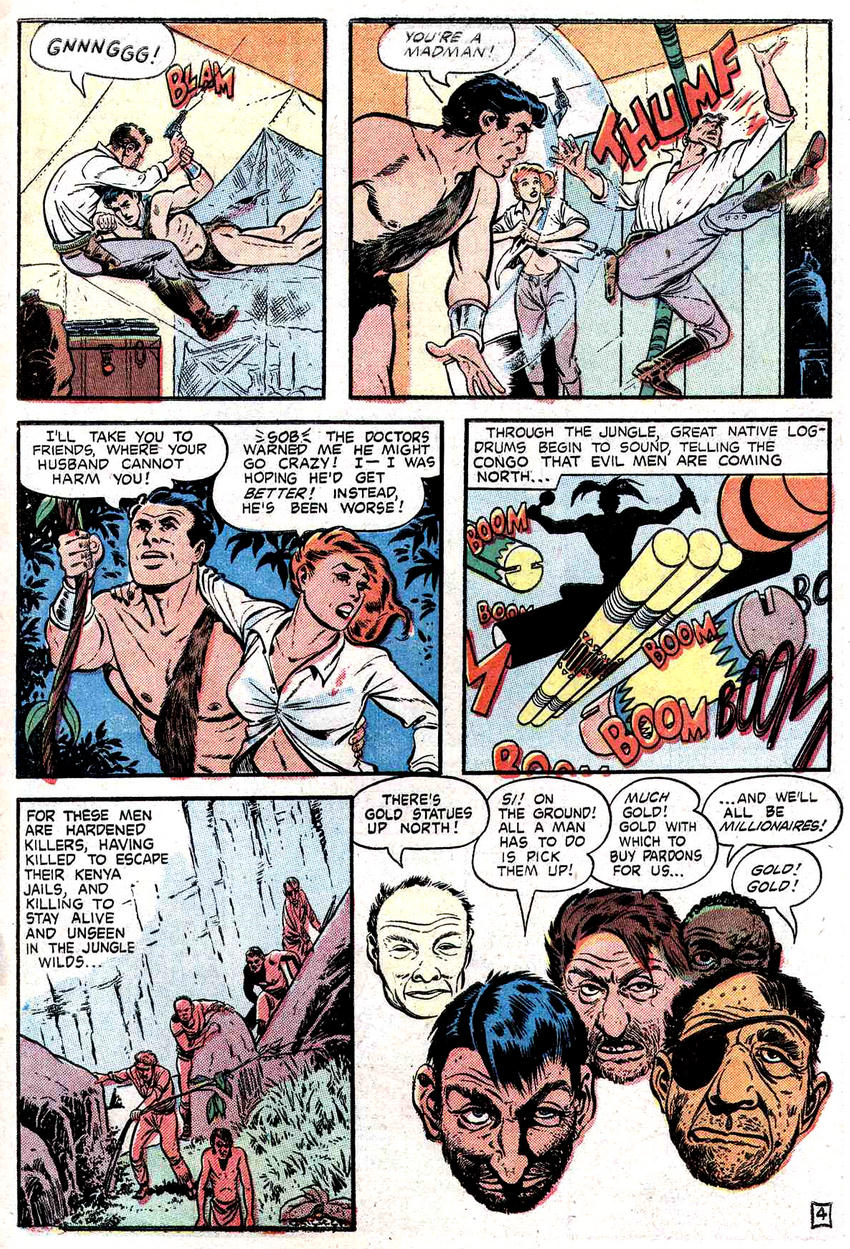 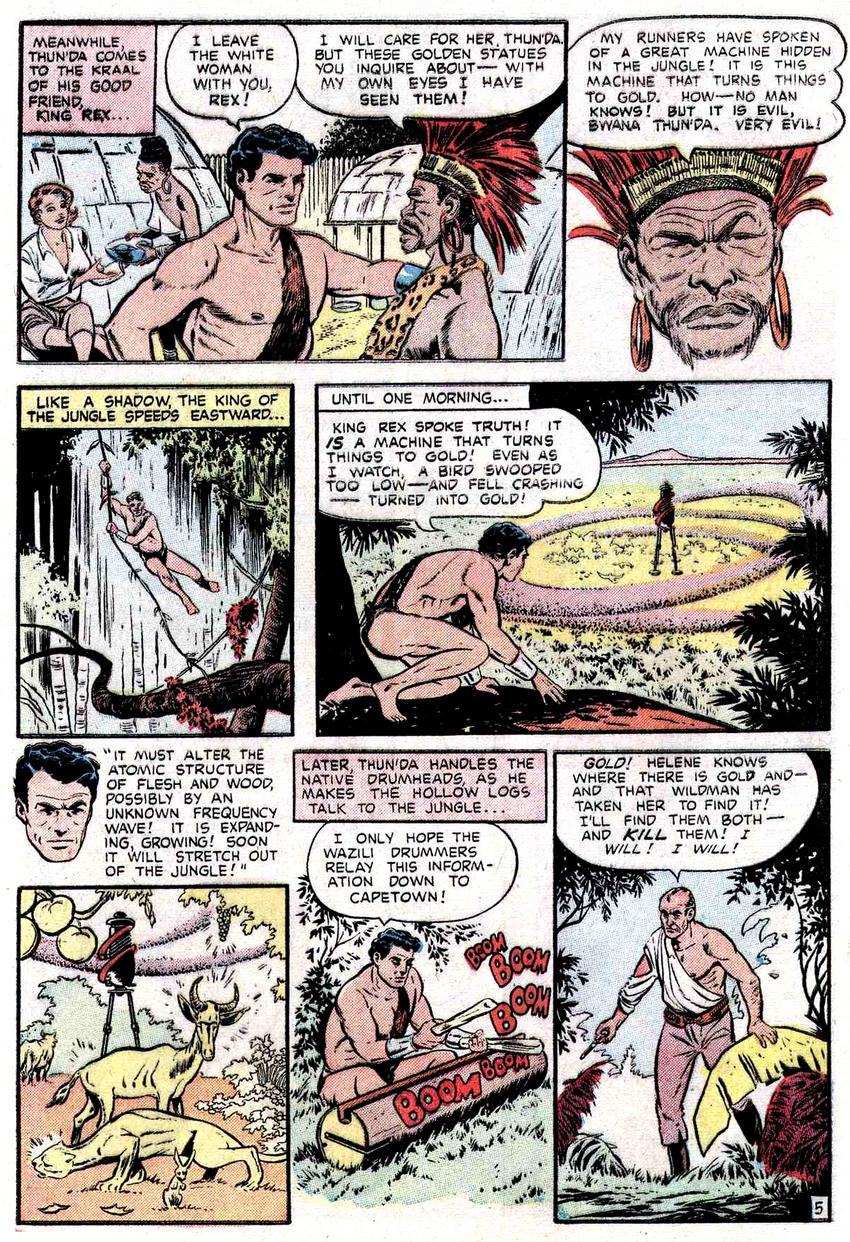 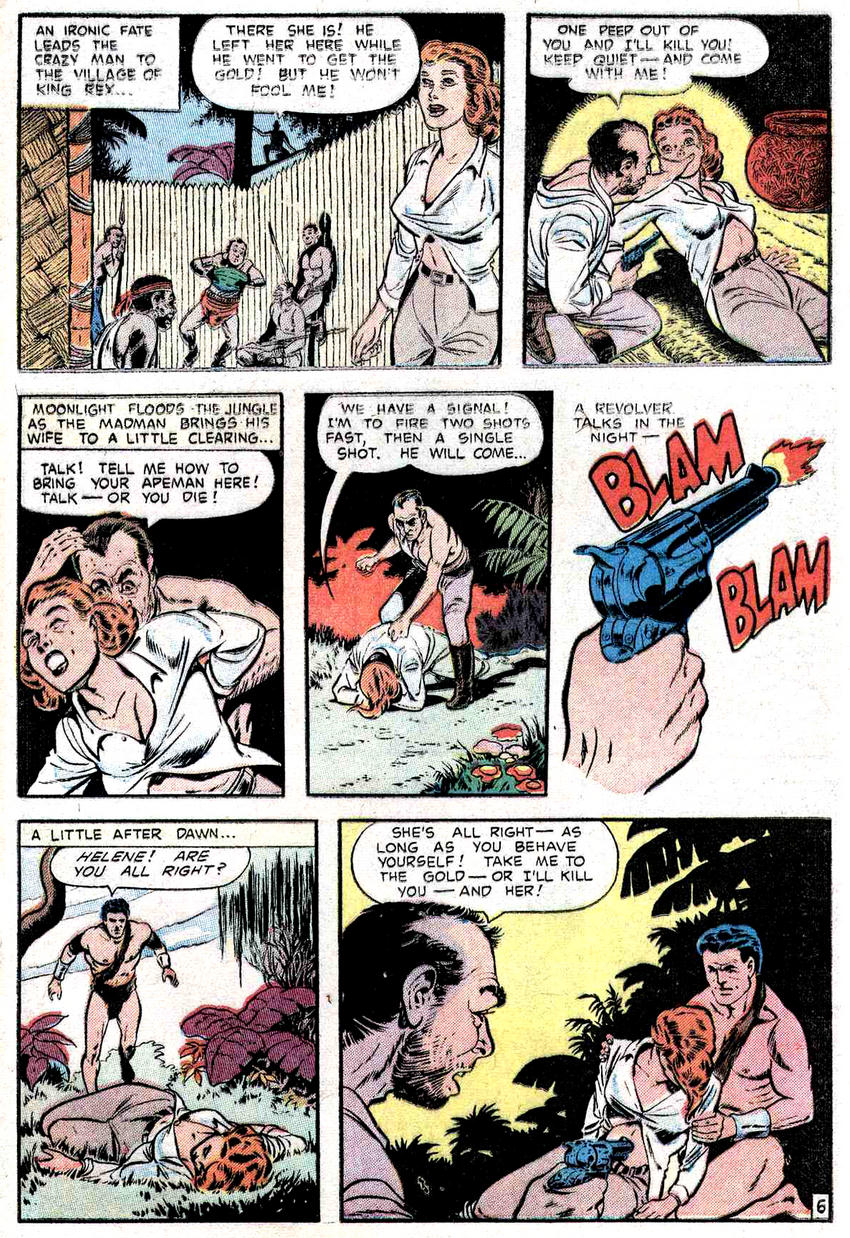 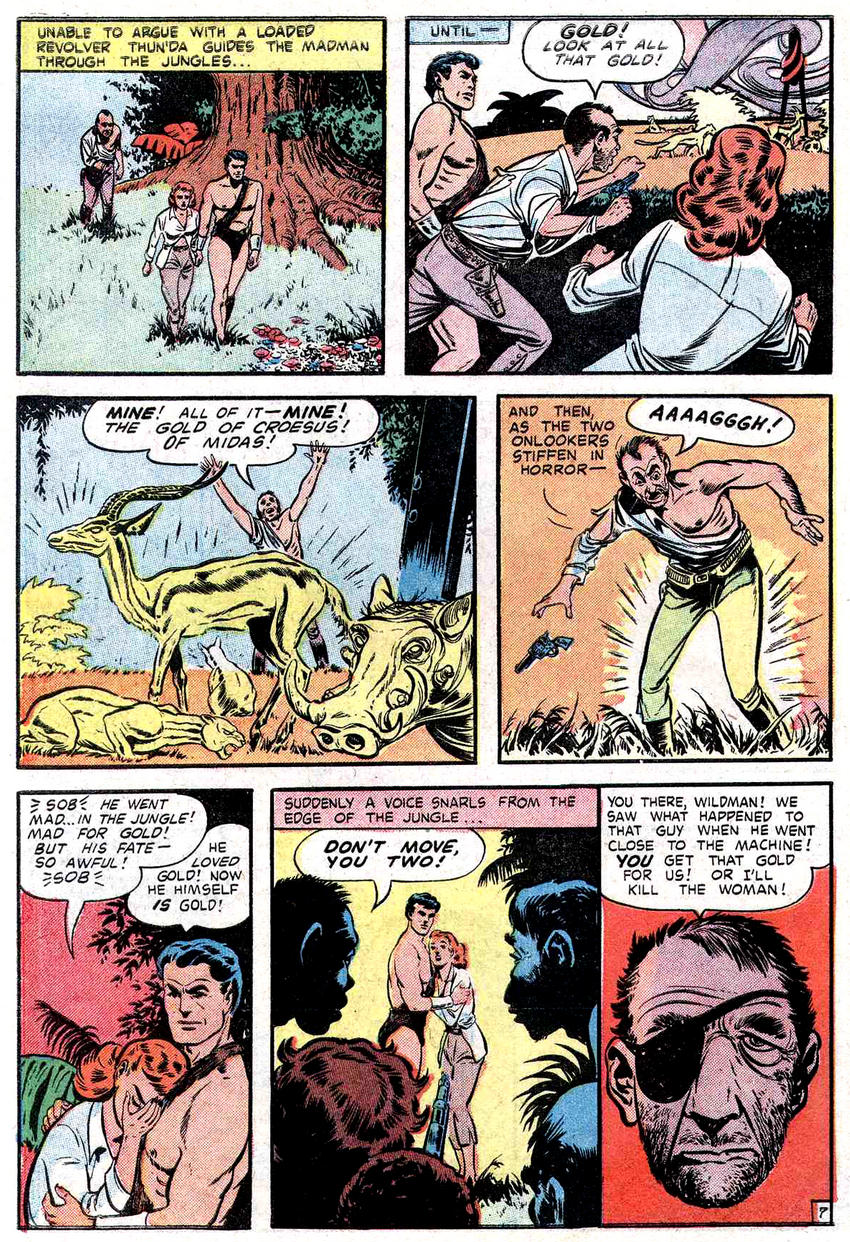 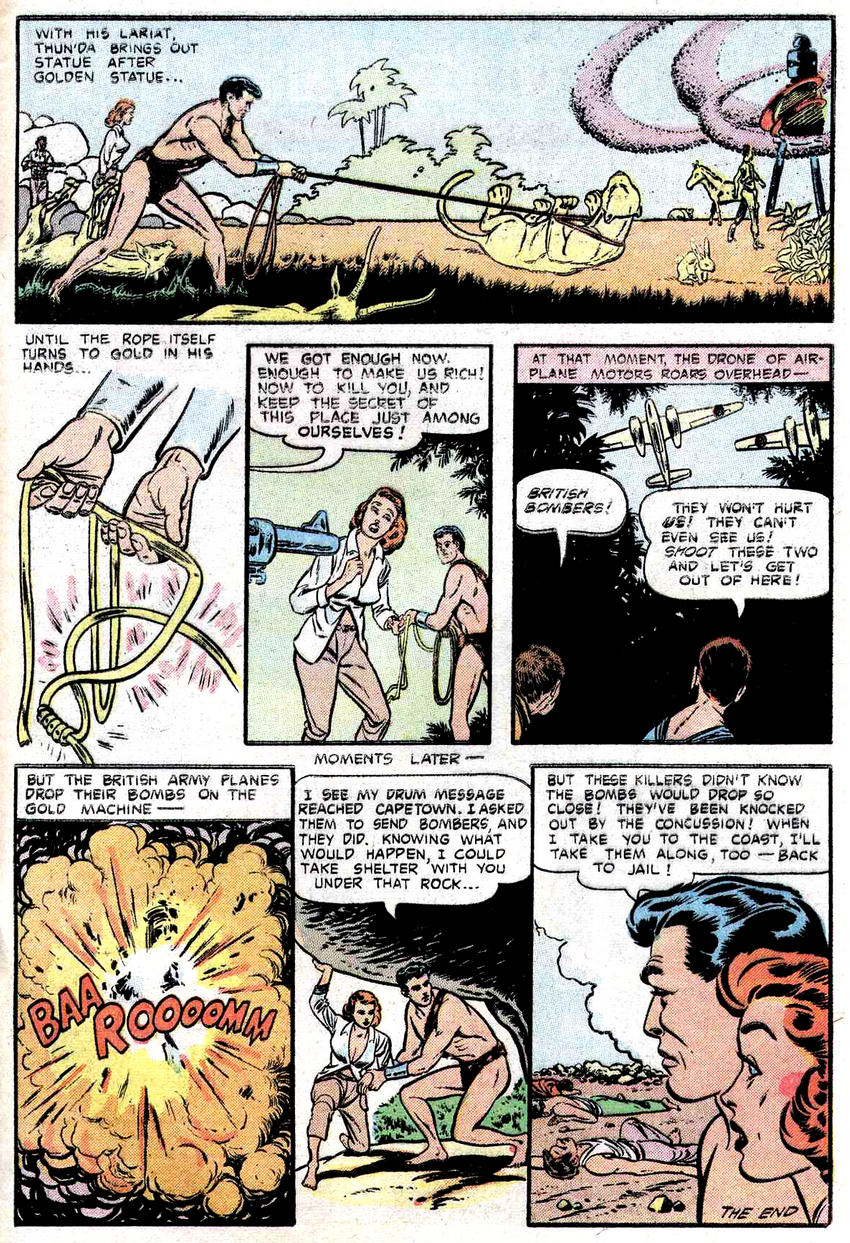 The story itself is rather ad hoc and otherwise weak; but, as usual, the work from Powell's studio is a pleasure to see (albeït not so great a pleasure as would be work from Frazetta).

Popular stories often bobble the issue of the density of gold. 8:1 was drawn by someone who didn't understand or just disregarded how dense gold is — 19.30 g/cm³ or about .696 pounds per cubic inch. Animal tissue would become about 19 times as heavy. Thunda's lariat would surely have snapped trying to pull that volume of gold, and Thunda would not have been able to use that posture even if he had a strength sufficient to that task.

I naturally wonder whether the original thought were that the escaped killers were to die in the bombing, with that ending softened by a dialogue change in the final panel. (The story is pre-code, but change was obviously in the air.)

Thanks for the story Mr. Pappy, at least Thunda has remained a decent Tarzan Knock-off after Frazetta and Fox went away.
Art is nice, and I like the fact that any purpose and motivation of the alien device remains completely unexplained. Turning men into gold is a curious side effect of something I guess. Maybe Midas was an alien.

In a Jeff Hawke story (Daily Express, 19/10/1961 to 05/04/1962, strips n. H2352-H2494) some ancient "Jewels" shaped like insects are found in India by British archaeologists. Nothing new, only, they are mechanized and can fly, activated by radio impulse. Turns out they are toys built by a four-armed giant alien (the original Shiva, marooned on Earth thousands of years ago) for his "kid" who eventually died because of Earth's germs. An hologram found in his tomb (where Hawke finds other alien puppets) explains that Shiva's son wanted to breath air for once in a while and removed his helmet. A very touchy English comic. The story is called "I giocattoli immortali" (the Immortal Toys) in Italy.

As usual, I digress. Calling for an air raid is a very "1950's Hollywood" way to solve the problem. Greystoke wouldn't have done that.

I notice en passant that the premise with the paranoid husband is similar to a famous 1970's Tomb of Dracula story (or was it in a Giant Size Chillers?) called, if memory serves, "The fine art of living".

Moore, Miller, Morrison and the other moderns are certainly great comics scripters, but Gardner Fox could write anything--and did!

If only Fox would have spent as much time on the story. Things just happen, characters just show up out of nowhere, and every characters motivations are as cardboard as can be. This works in a horror or crime story where motivation isn't key, but adventure stories suffer under that weight.

Note: Machine that turns anything near it into gold and can survive millions of years after falling into the grinding pit of an earthquake (and then suddenly pops out of a cave) is destroyed by bombs (which should have been turned to gold, anyway.)

Fox wasn't trying very hard on this one!

Touchy = touching.
I need to practice!

Daniel, we must take into account that even if Gardner Fox knew the density of gold, it would probably have gotten in the way of his fast-and-easy storytelling. Besides, the thinking in those days was the kids reading the story wouldn't know what you know...y'know?

I always enjoy your explanations, though.

Brian, I think your opinion of Fox not trying very hard on this one has something to do with deadlines, page rates for scripts and infantilizing the stories to make them fit into seven pages. It's a fast-mover, but not much to think about after it is over. I think Fox was lucky at ME for having some good artists, including Powell, to write for.

Ryan, your vote is for Fox as a good comic book writer. I liked his comics written for Julius Schwartz at DC, without knowing that he wrote hundreds or thousands of comic book stories going back to 1940 or so. He was one of the more prolific comic book writers. I remember at the height of his fan popularity in the early '60s he wrote several novels which were derivative of other authors, but that I enjoyed. A commenter, Badelaire, on another blog, Dark Heritage, said, "Fox, while not a 'great' author, is fine for that 'sitting on the back porch drinking a beer and enjoying the summer' kinda vibe."

Alicia, thank you for the link. I trust you had a nice Valentine's Day. I picture all of your boyfriends lined up around the block, waiting to present you with candy and flowers.

As for a cosplay idea, I have always been partial to Black Cat. Nice costume! The buccaneer boots are a good touch.

OMG she has tha same boots as Ms Victory!!! I got thoze boots

Alicia, well then, you don't have to buy new boots.

I'm getting kind of warm thinking about that costume, so excuse me while I take a cold shower.