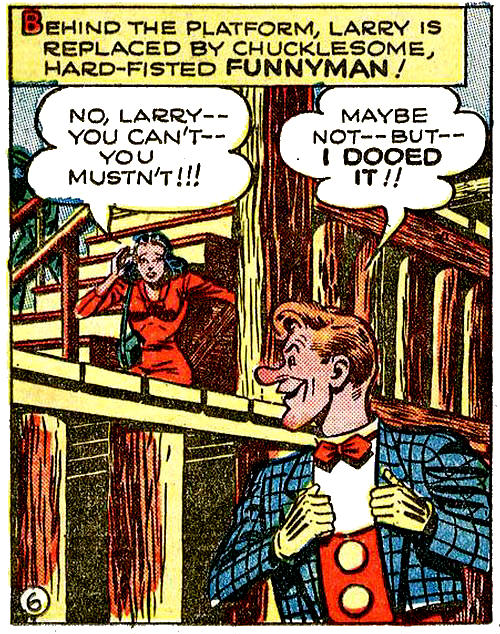 I have shown Funnyman stories before. The character was created by Jerry Siegel and Joe Shuster after their creation, Superman, was seized and then S and S were kicked to the curb by their publisher. That isn't funny, man.

Funnyman was not a big hit as a comic book, lasting a short run of six issues, and for a short time as a newspaper comic strip. ME was the publisher, and several artists did the drawing. This particular episode, from Funnyman #3 (1948), is credited by the Grand Comics Database to John Sikela for pencils, and inks by the Shuster studio. I see the character as being modeled after Danny Kaye and Red Skelton (“I dooed it!” is taken directly from Skelton). Throw in some baggy pants and some superhero-style gimmicks and voila, Funnyman. 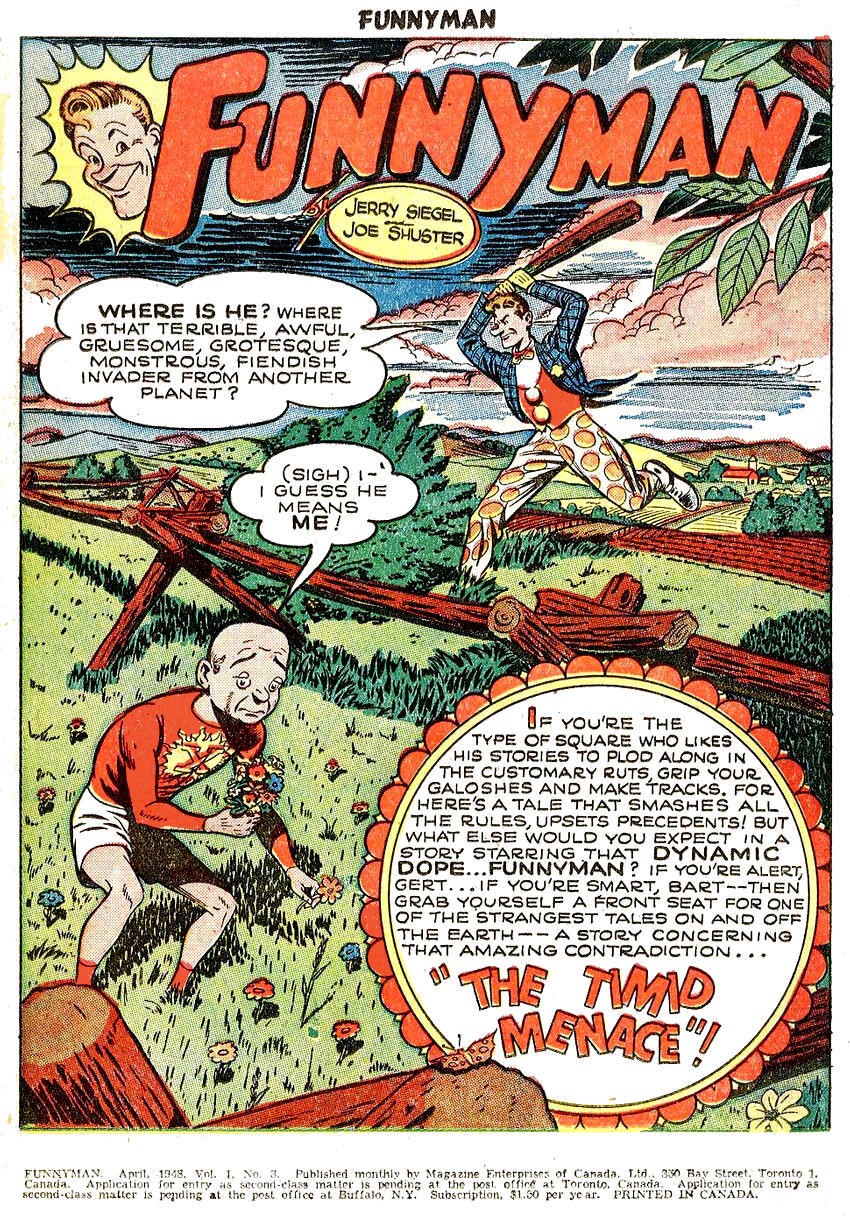 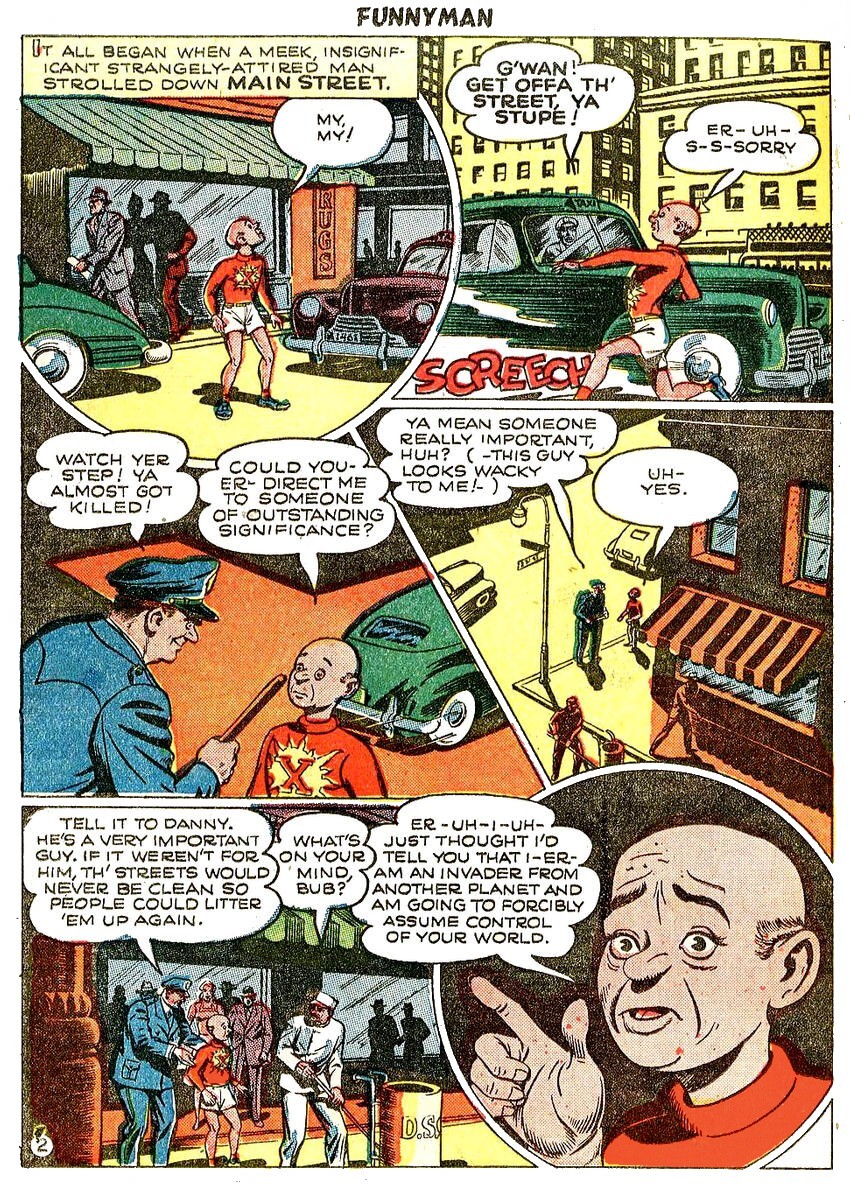 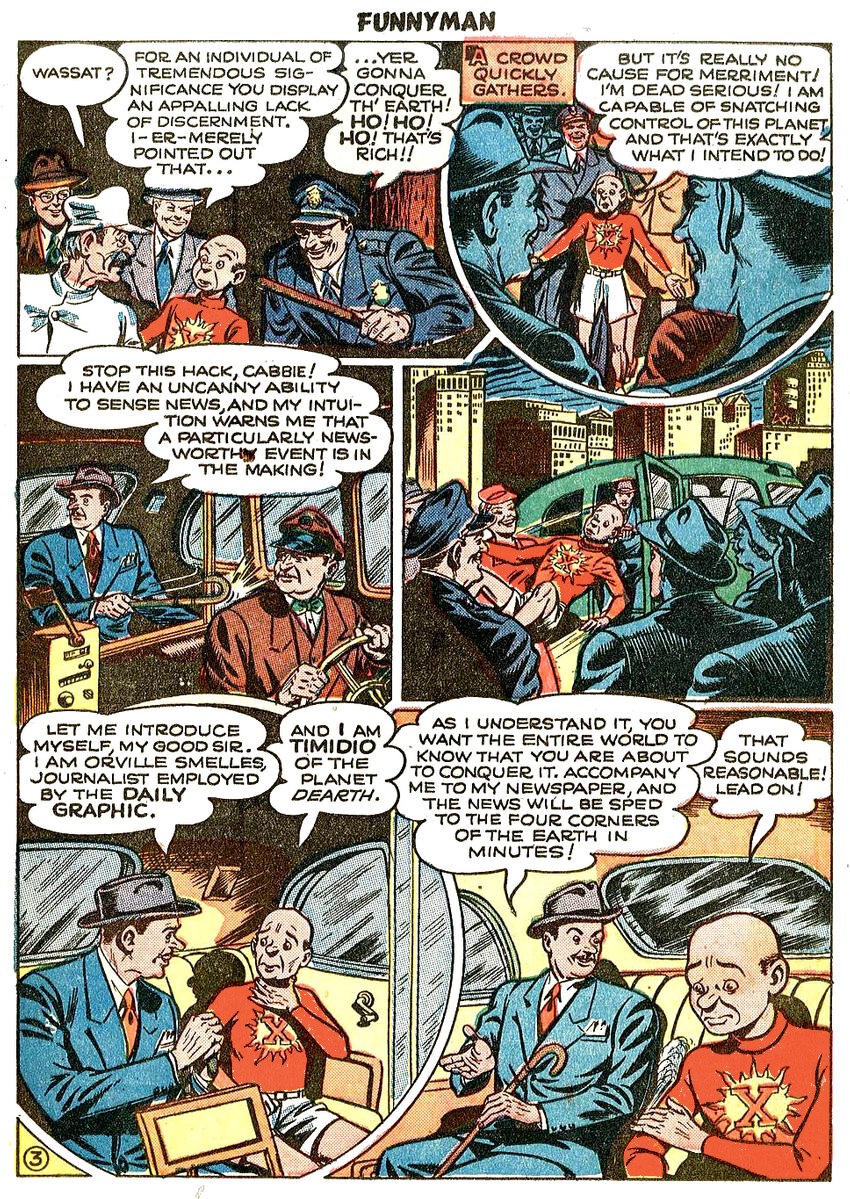 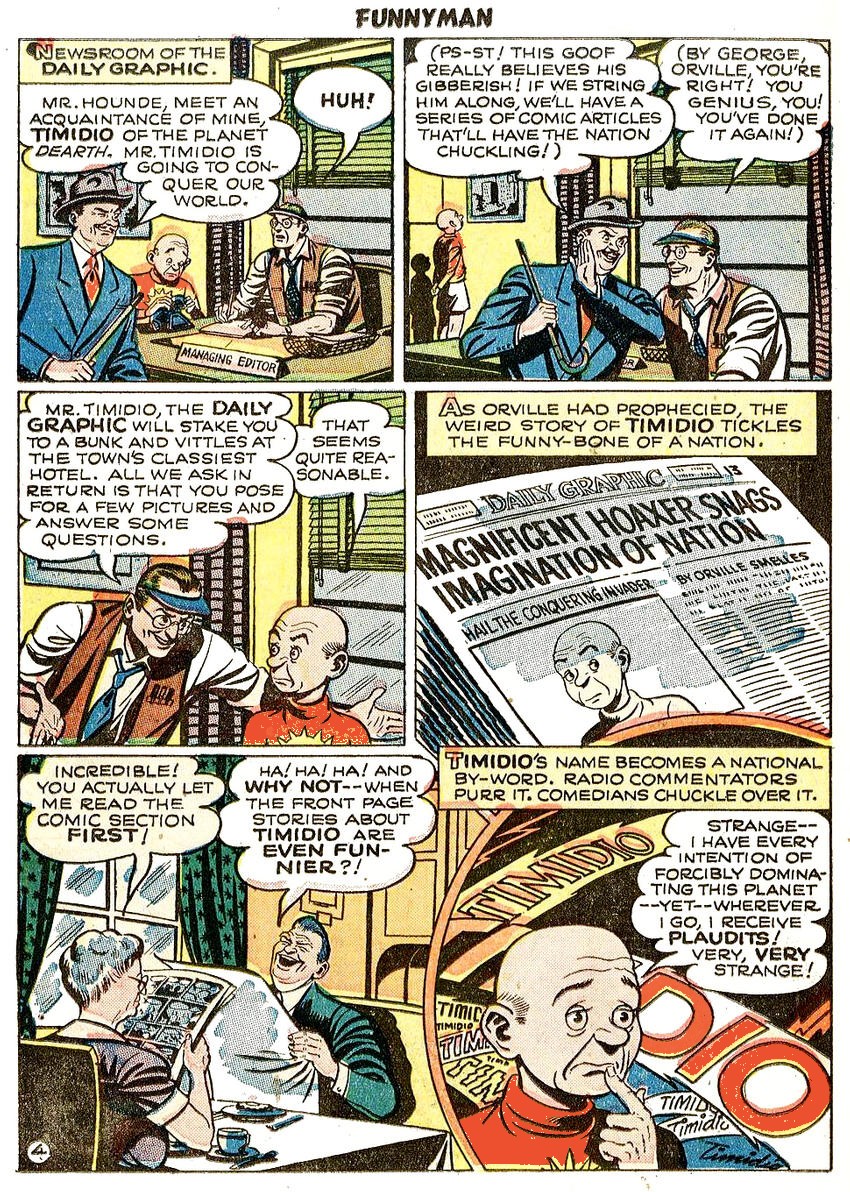 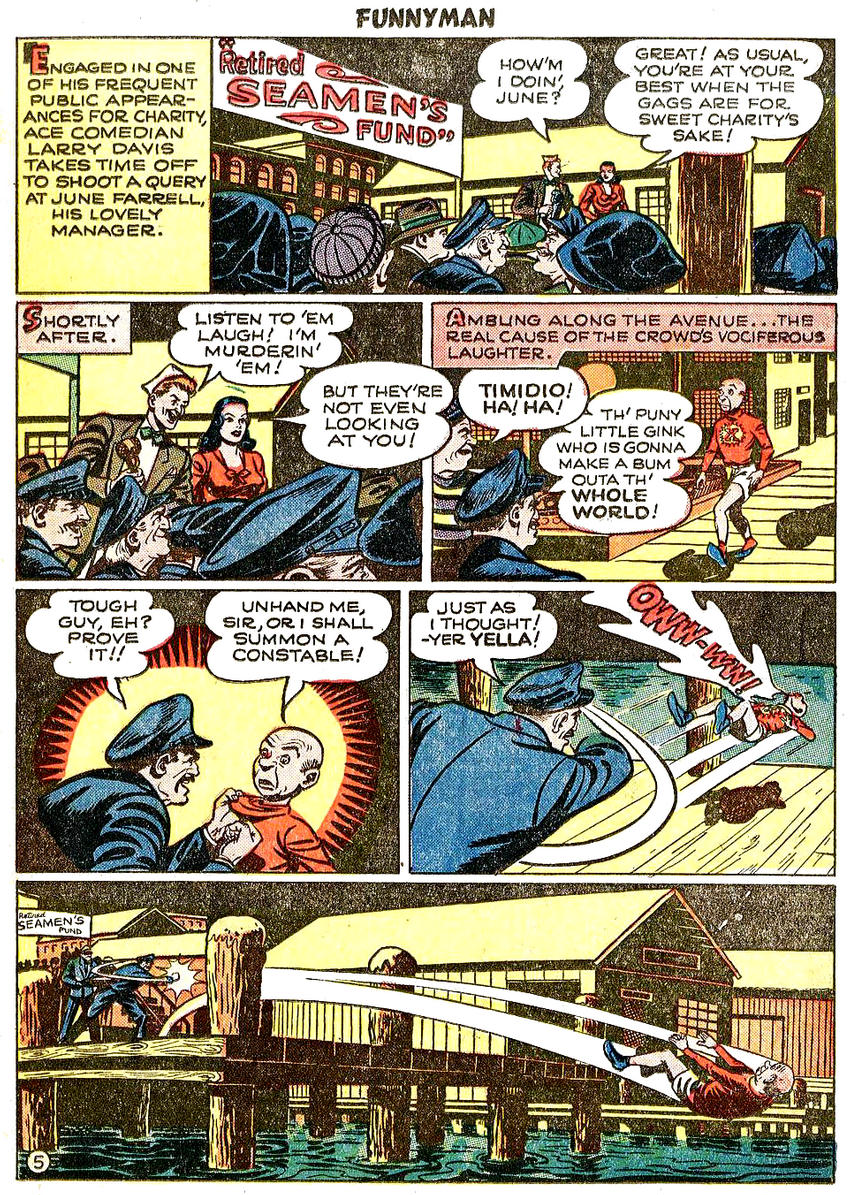 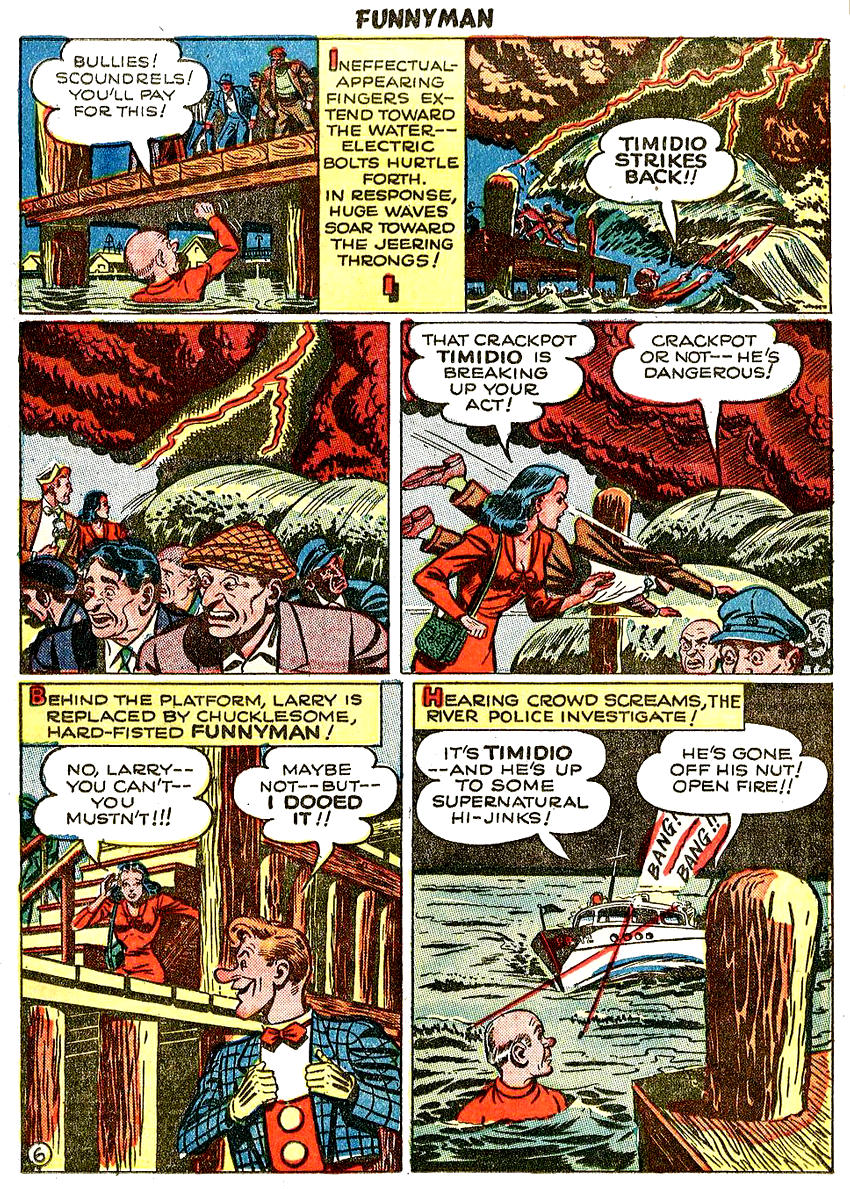 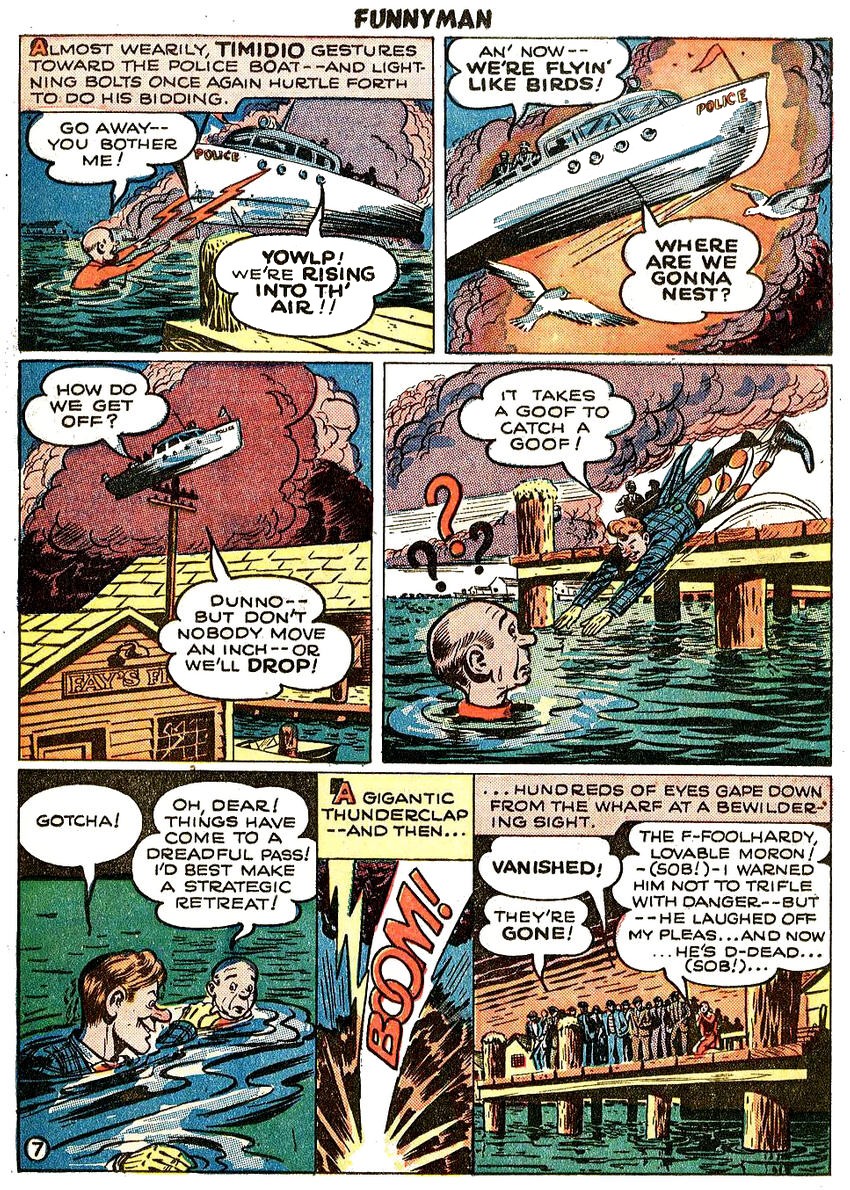 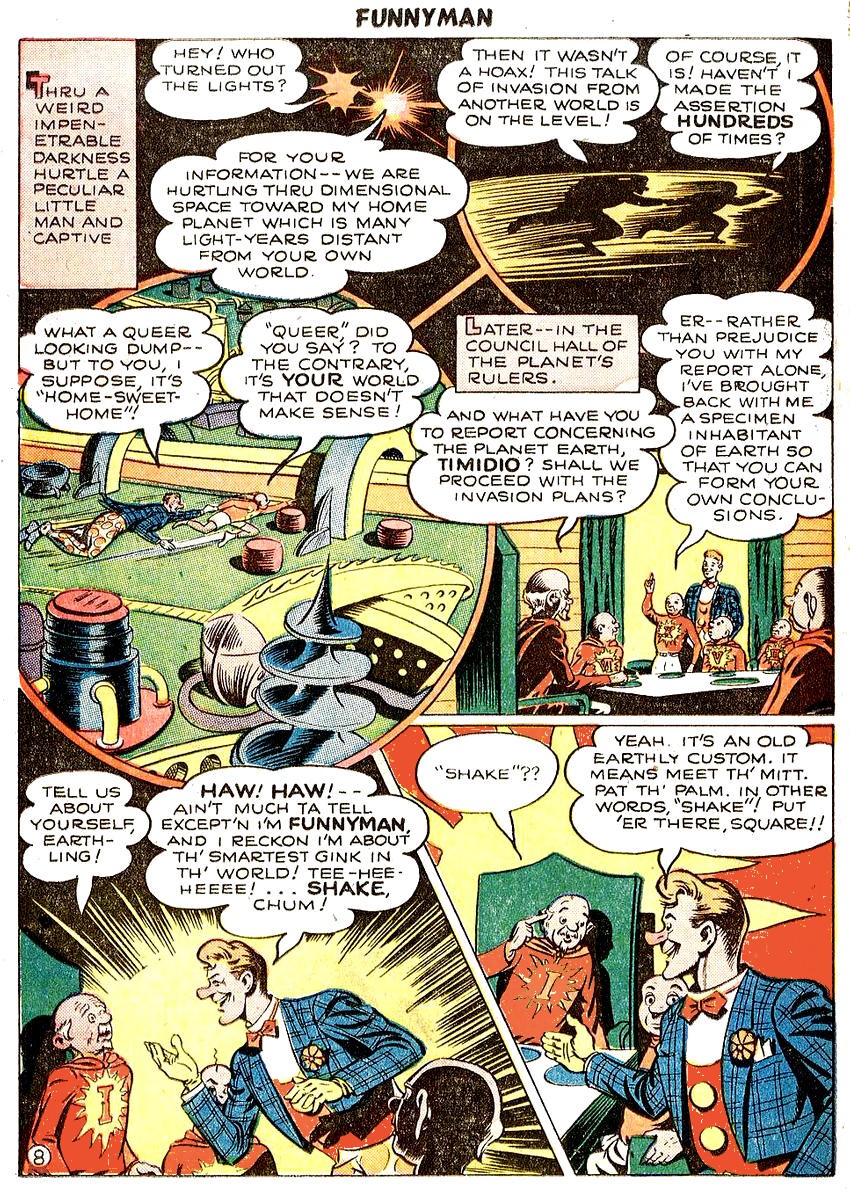 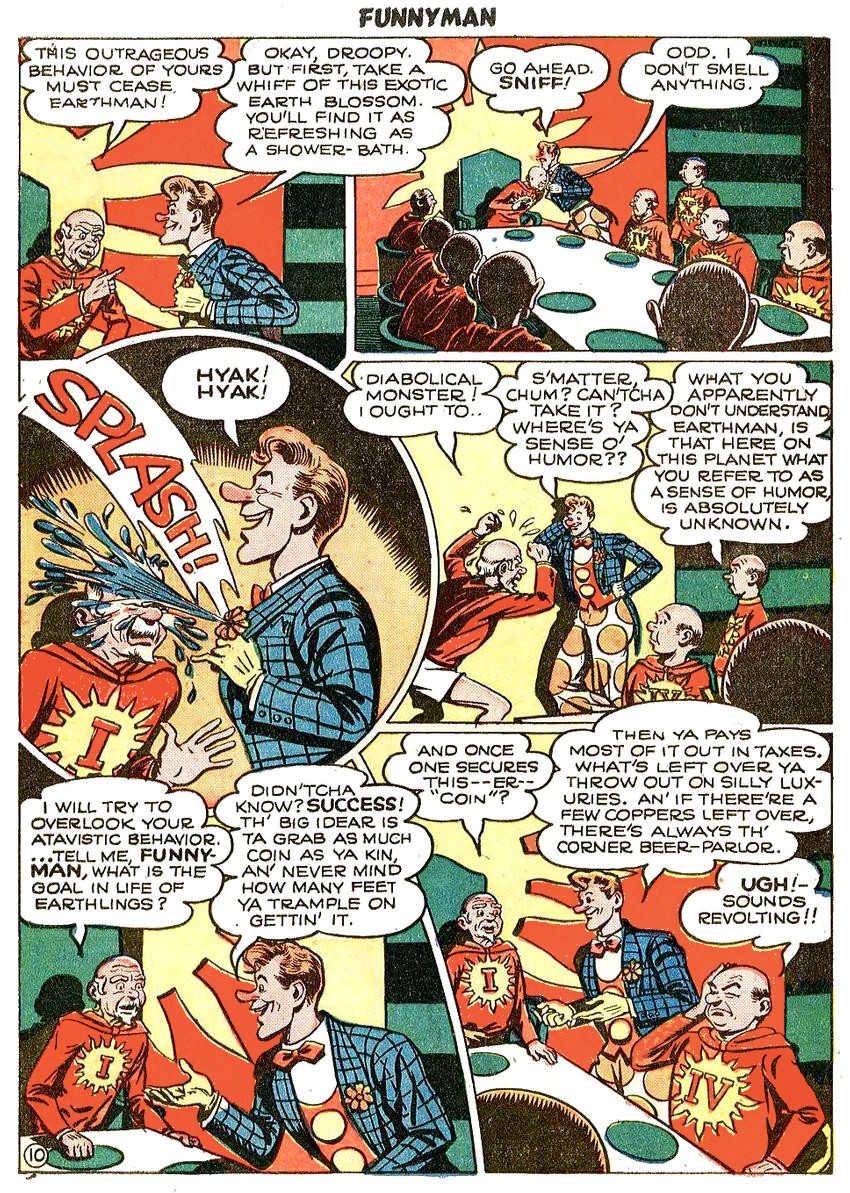 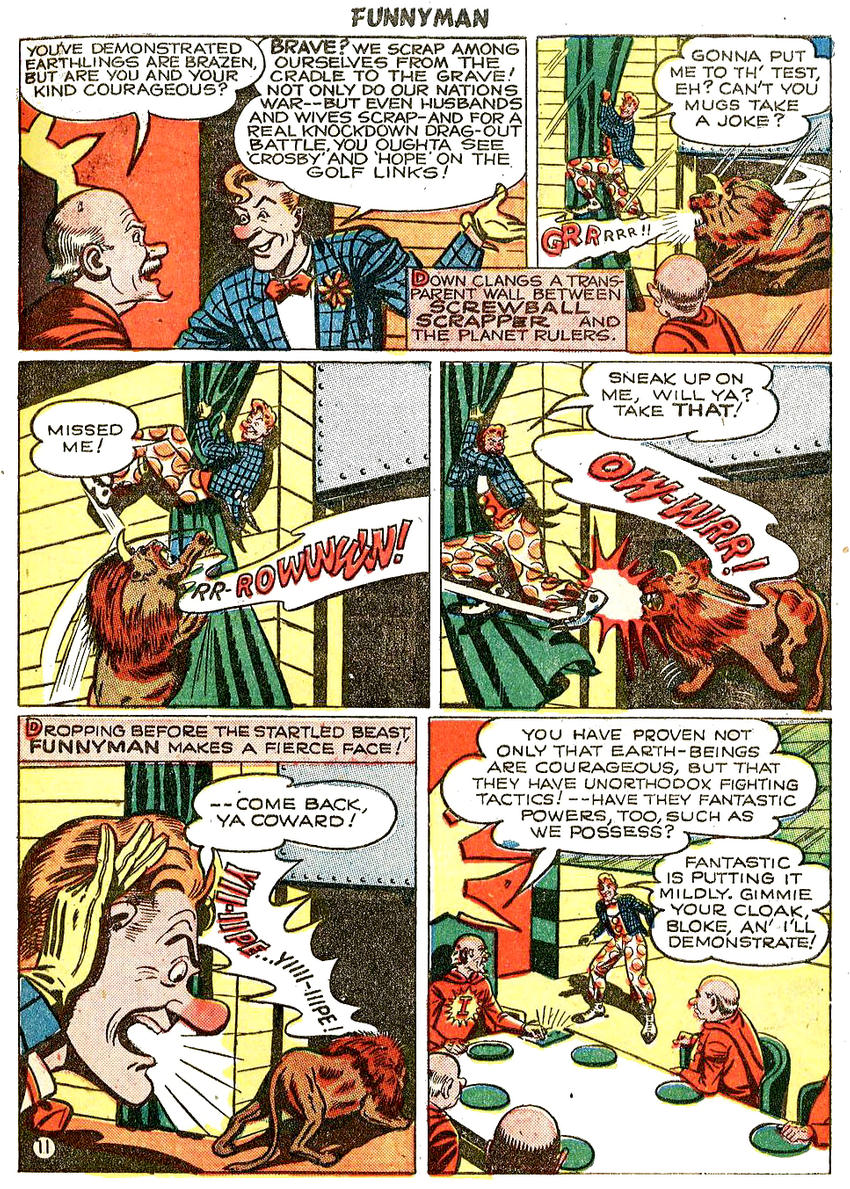 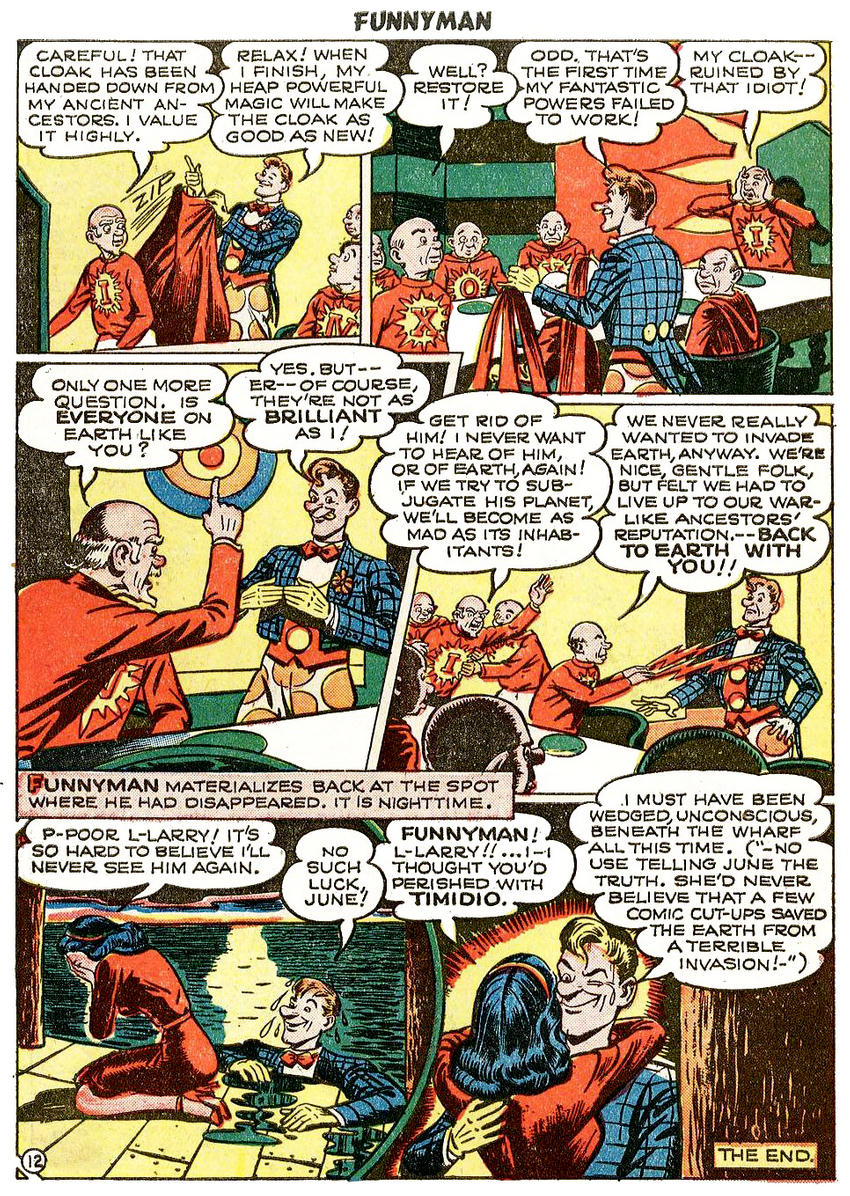 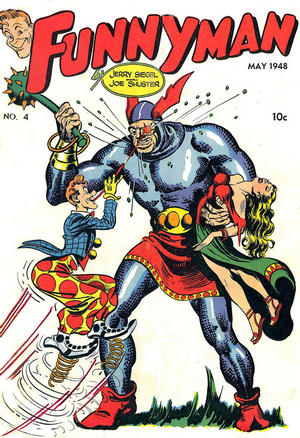 Another superman before Superman

It is no secret that Siegel and Shuster had their models for Superman, even a villainous Superman. Philip Wylie’s novel, Gladiator, is widely touted as a direct inspiration. Wylie always believed it, anyway, even if Siegel denied it (why put yourself on record with a statement that can get you sued?). Gladiator was published in 1930, and this story, “The Superman of Dr. Jukes” by Francis Flagg, is from the November, 1931 issue of Wonder Stories.

“Killer Mike” is Dr. Jukes’ superman, and the author makes it fairly clear that the story is also about Al Capone — called Frazzini, or “The Big Shot” —  throughout the story. Killer Mike makes more like the Flash than Superman, moving so fast everything appears to him to be in slow motion.

To me the story if of its era, corny in spots. Brad Ricca, who wrote Super Boys, a book about Siegel and Shuster, says that Siegel read it. It is true that Siegel’s early fanzine story, “The Reign of the Super-Man” was about a criminal superman, not unlike Flagg’s.

These are scans of the pages of the story from its original appearance in Wonder Stories, so you can see for yourselves. 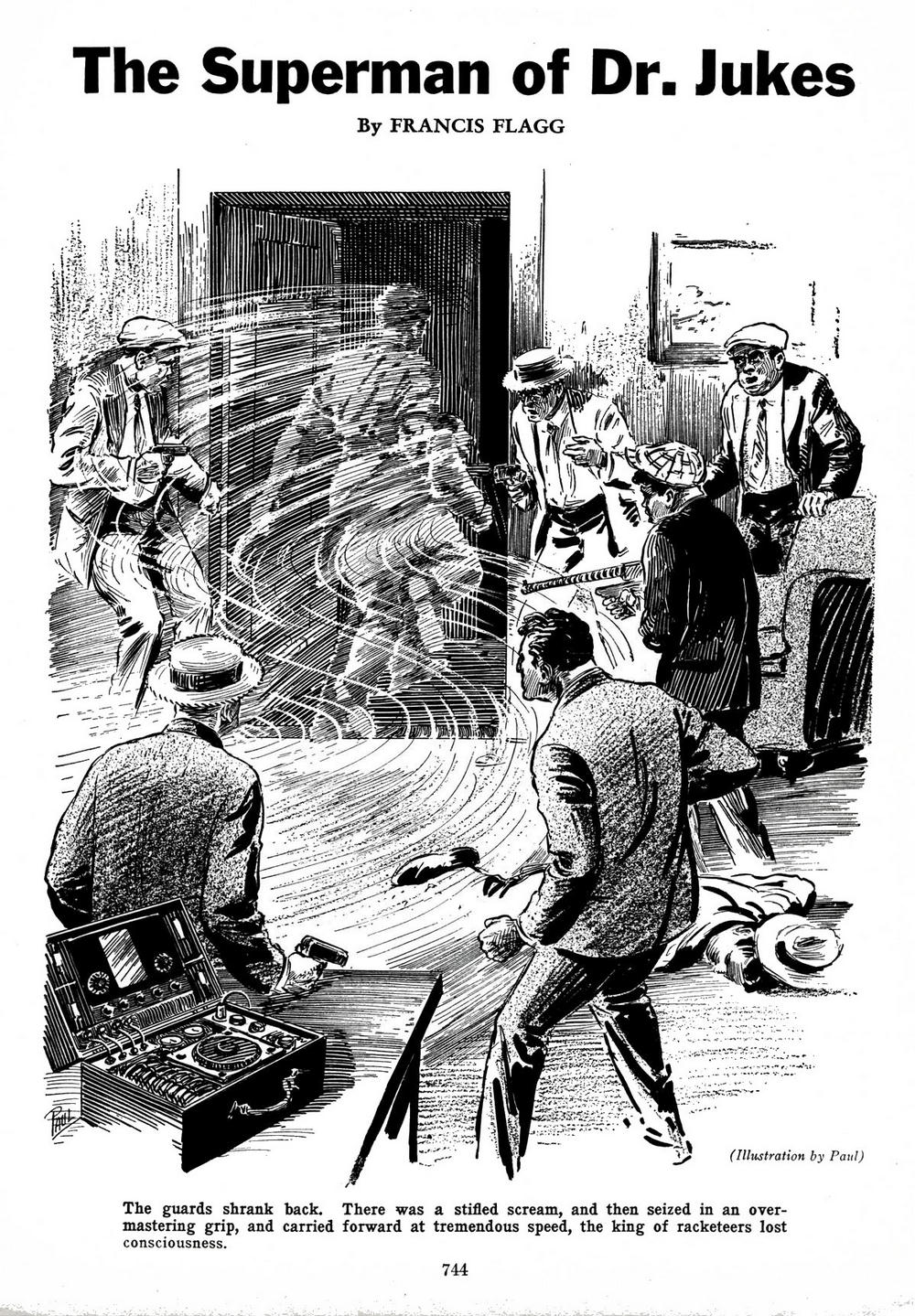 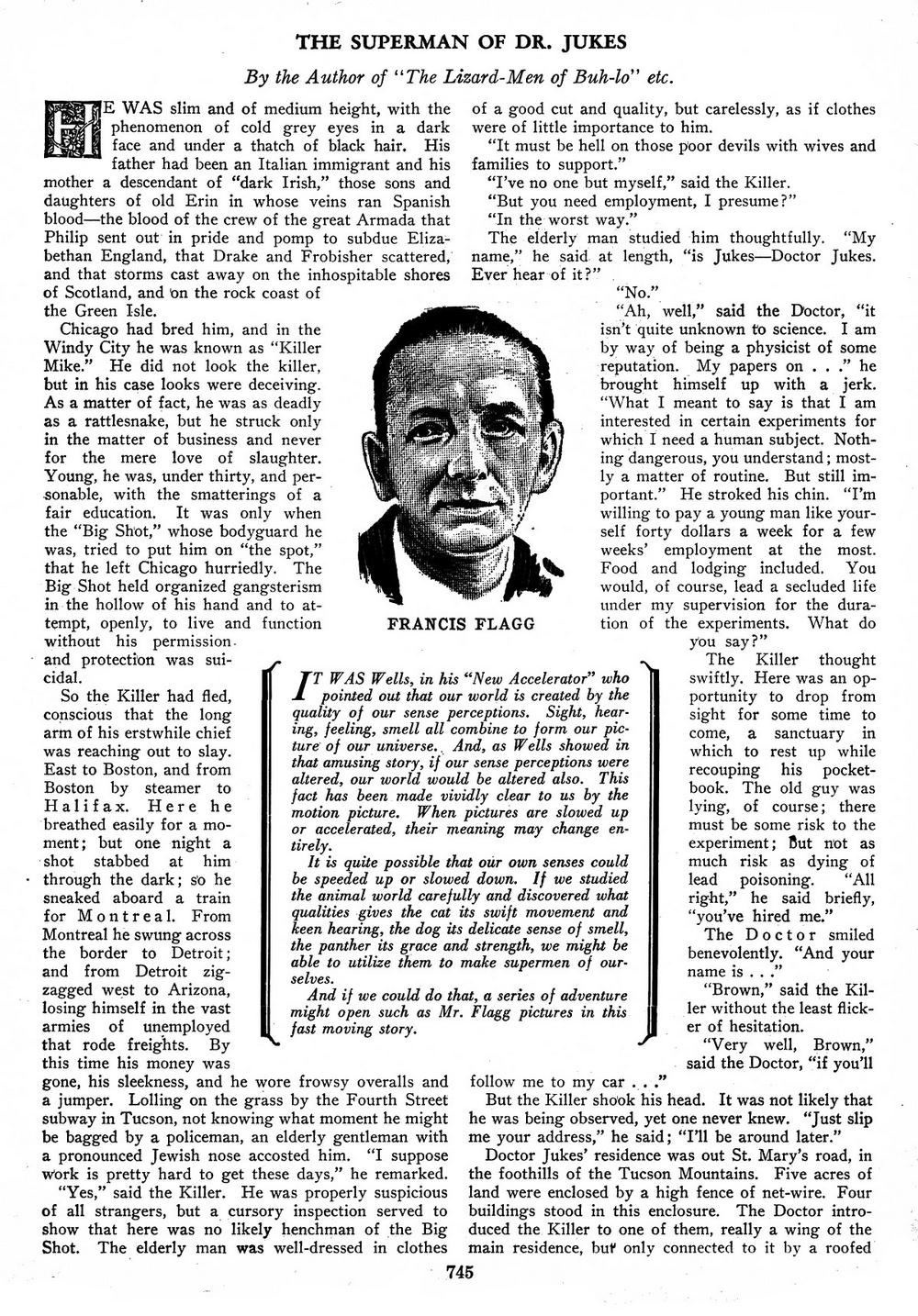 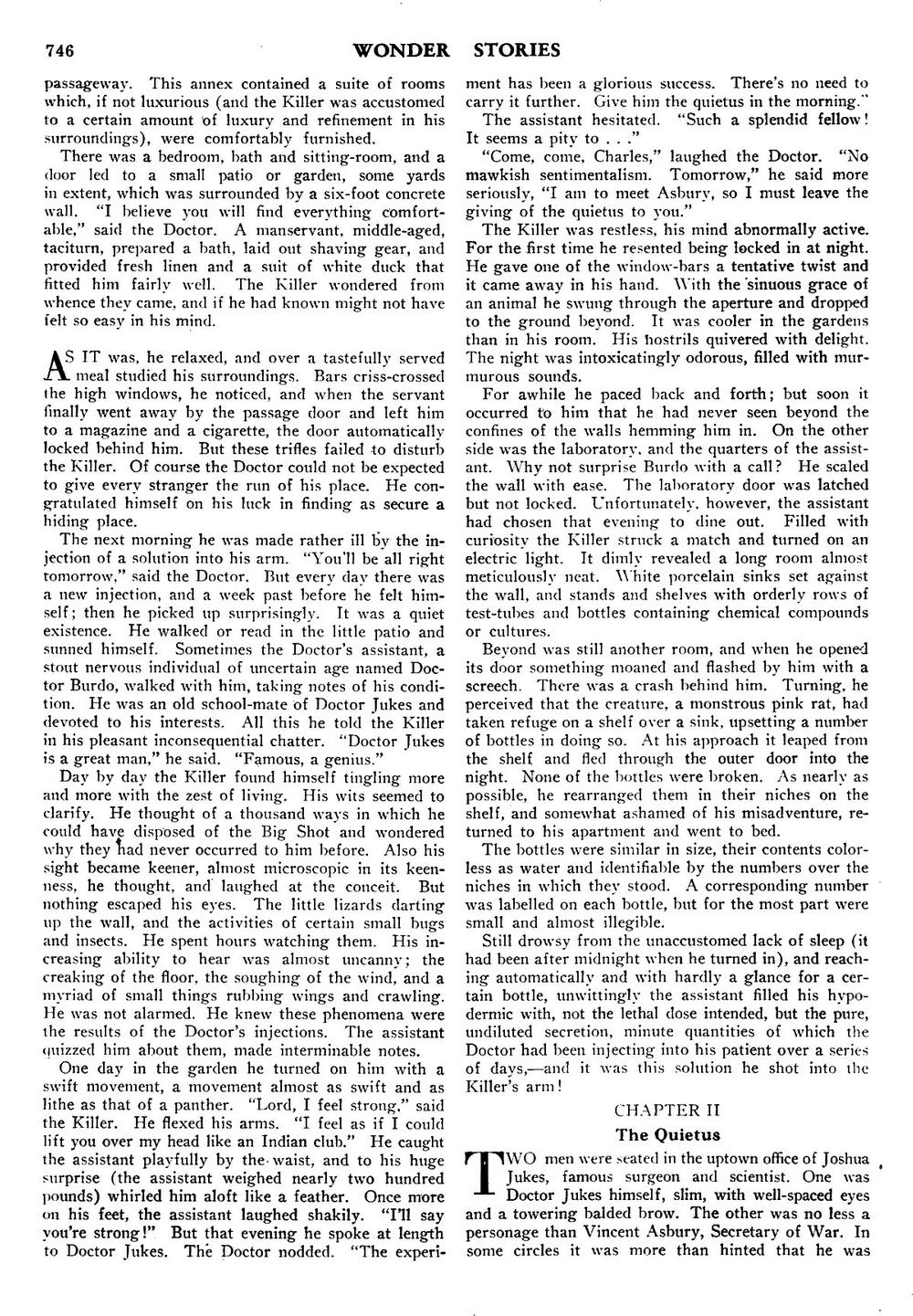 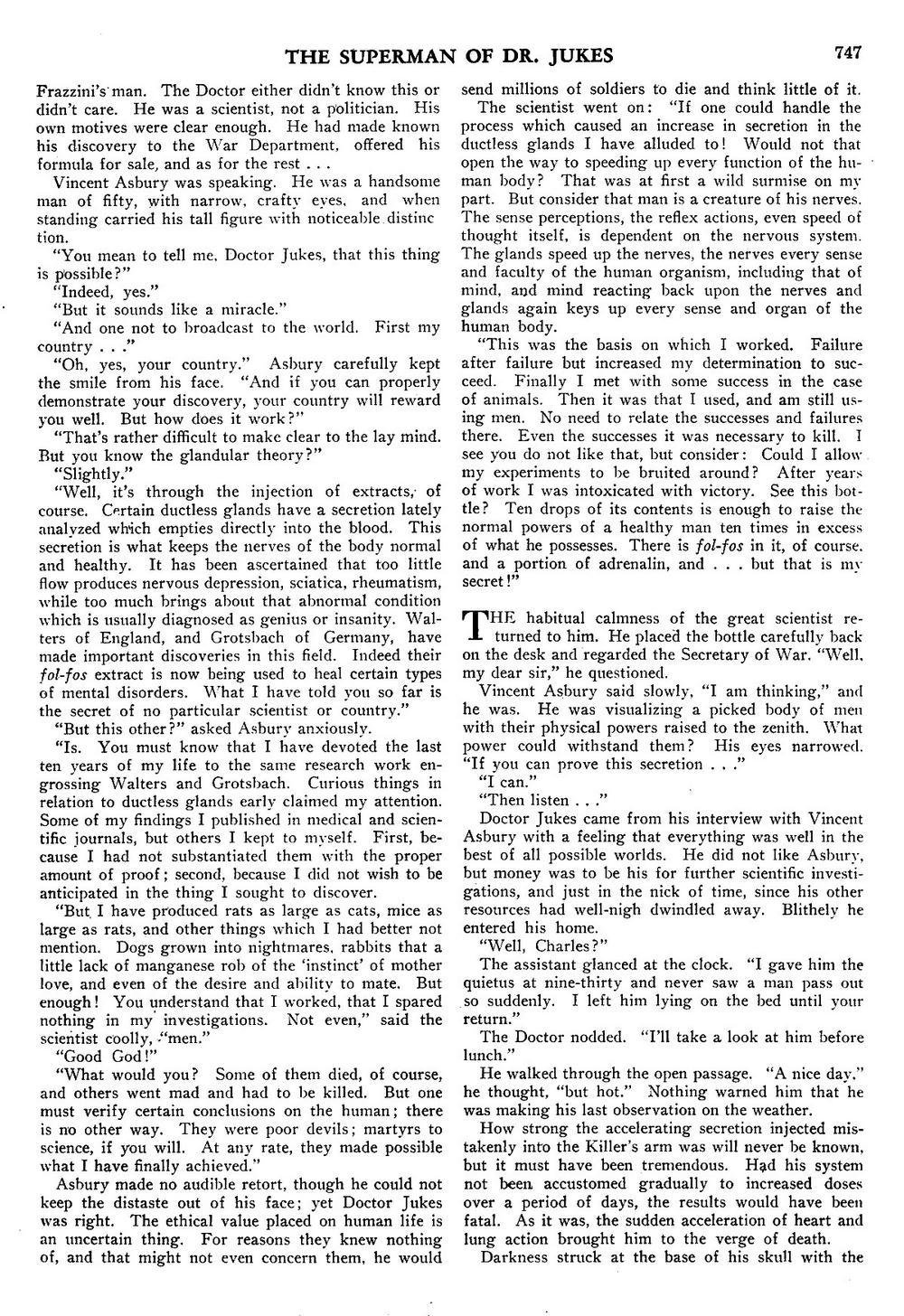 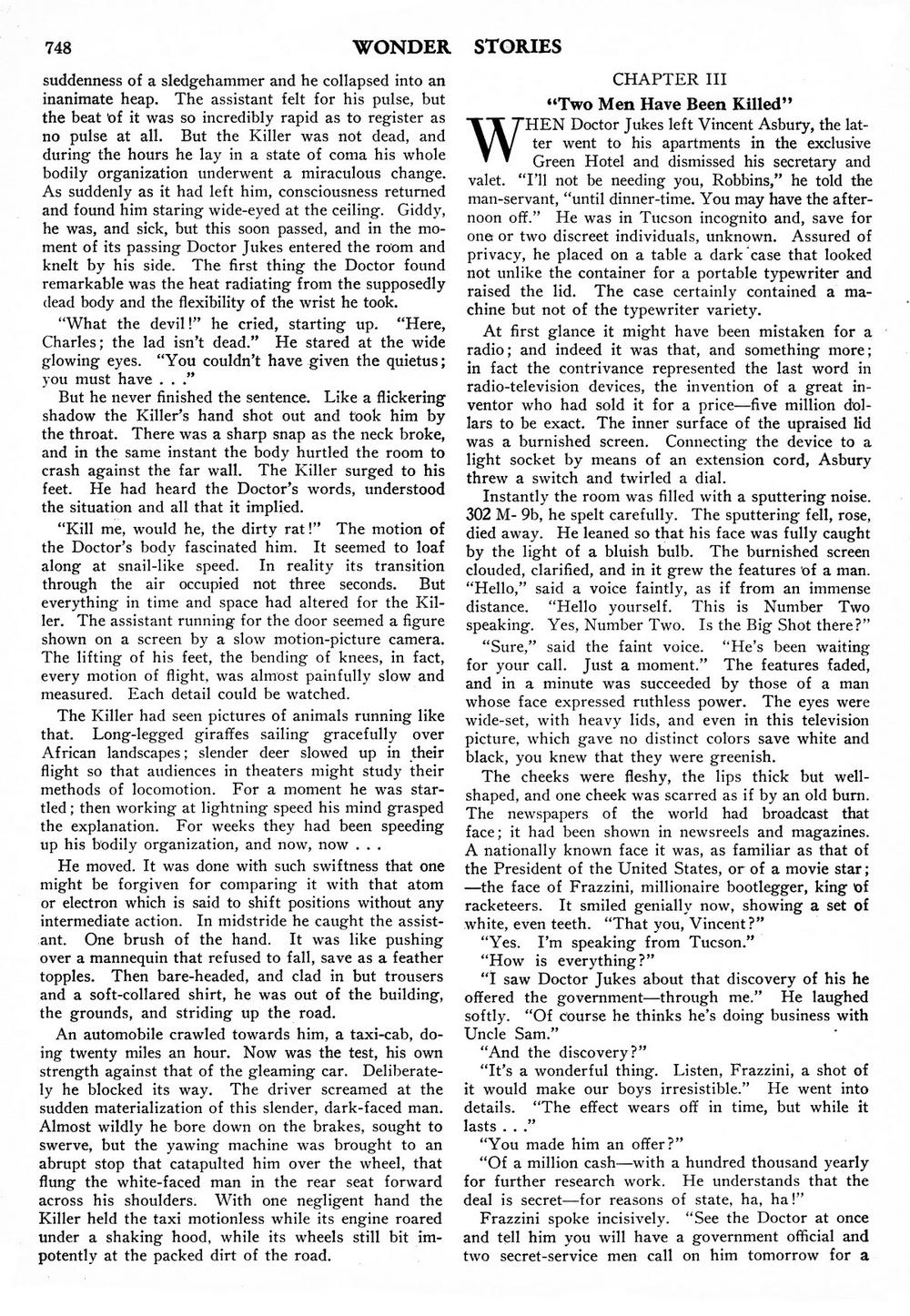 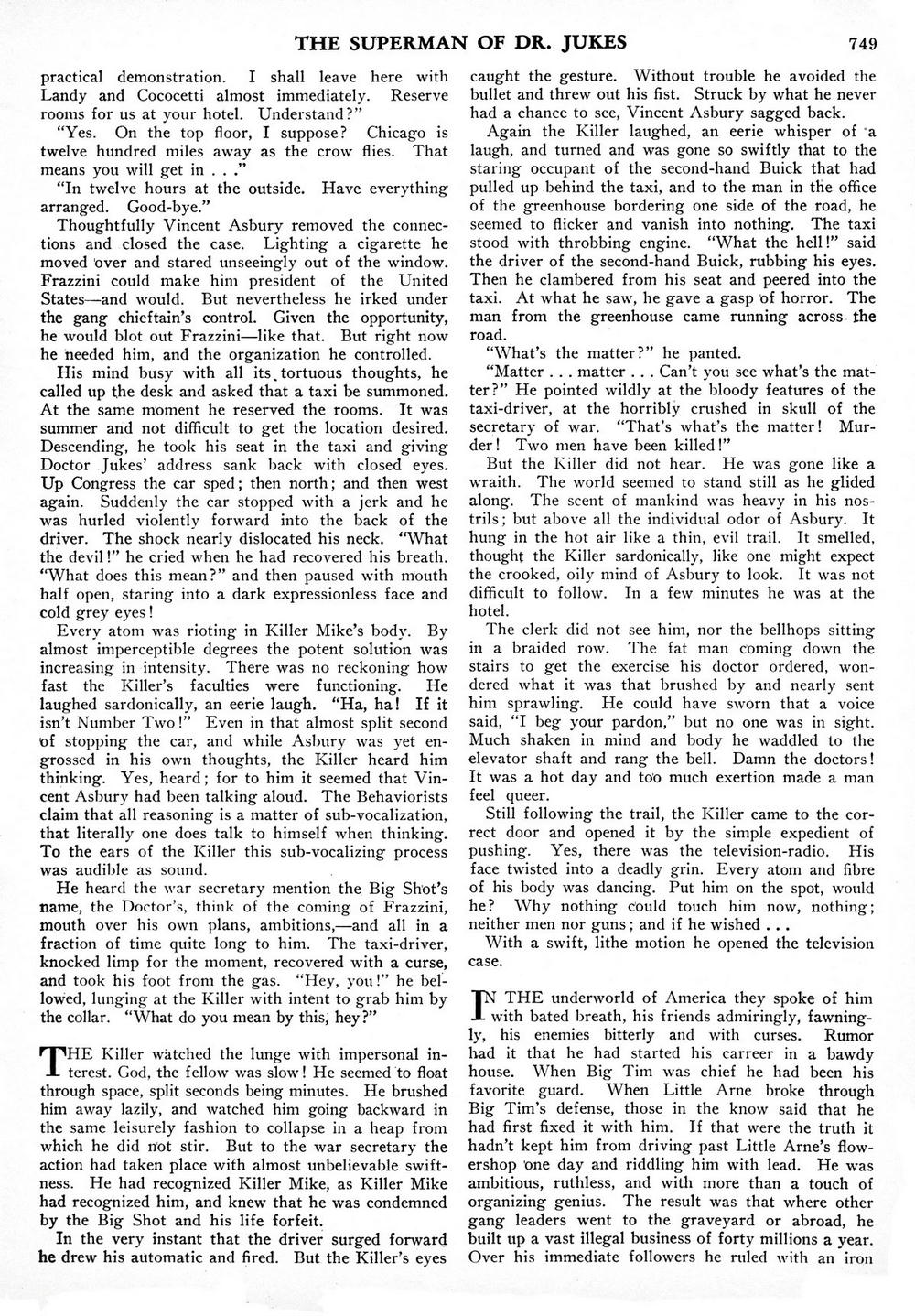 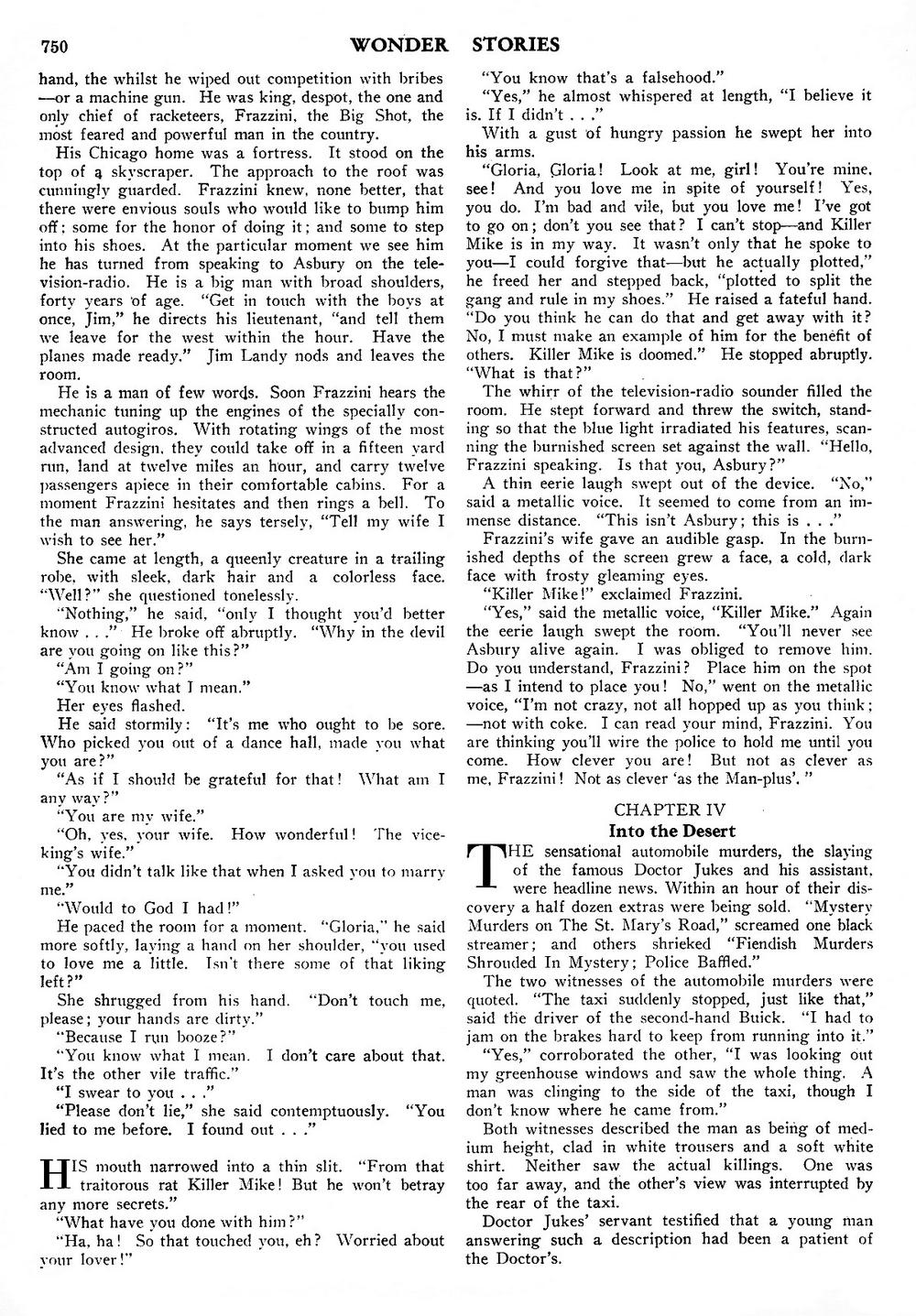 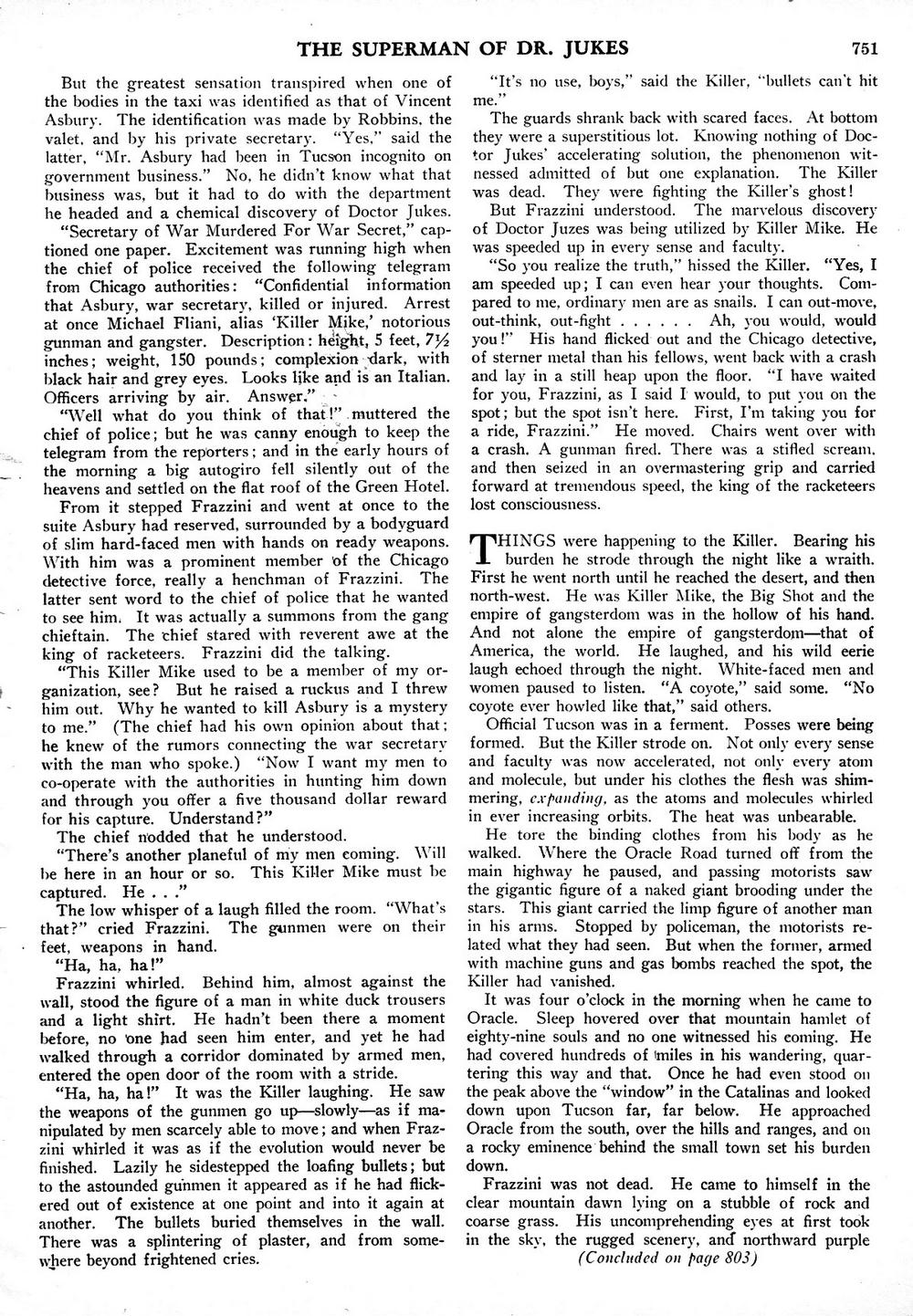 I'm afraid Siegel just tried way too hard with "Funnyman." He was a lot funnier writing his wise-ass Superman, or even the Spectre, when he wasn't really trying.

I read "Gladiator," and there are bits that Siegel lifted almost unchanged for Superman, such as the part about ants carrying things so much bigger than themselves. Plus, he actually reviewed the book for his fanzine, so he didn't have a leg to stand on saying the book wasn't an influence.

I guess those two guys really, really wanted to do a spoof of Superman.
It's Funny (yes it is), because BOTH Funnyman and his foe makes me think about Mr. Mxyzptlk (mixed with a little bit of the Joker, in Funnyman's case).
Very interesting, the Francis Flagg story. Superman or not, there IS definitely a direct line stretching from Pulp magazines to Comics.
Many Pulp heroes of the early 30's are prototypes for comic's action heroes (the Shadow, Doc Savage, etc.) and had their comics in due time.
I reckon magazines like Weird Tales are direct ancestors of many 40's-50's Horror comics. PulpLand is a fascinating territory.

Ryan, I also think Funnyman tried too hard to be funny. I think Siegel was better, for instance, over a decade later when he was doing "Tales of the Bizarro World." It may have been because the comedy came naturally out of the circumstances of the backwards-acting characters.

J D, the Golden Age of comic books grew right out of the pulps. Many of the publishers went from pulps into comics.

I thought the strongest part of the story was when Funnyman explains the "goal in life of Earthlings" Some genuine satire there. Just not enough to sustain the whole adventure. Maybe if the book had lasted more than six issues, and Siegel had more time to work out the bugs, we'd now see it in the same light as Plastic Man or The Spirit, two other comics that mixed humor and pulp melodrama.

OMG Pappy, Funny Man wuld B so funny if he was funny yo OMG!!

The story about Clark Kent being named for Clark Gable and Kent Taylor (the latter nowhere as big a star as the former) struck me as BS; more likely the names came from Clark (Doc) Savage, and Kent Allard (The Shadow).

Alicia, I will look forward to the pix of you as Miss Victory! Make sure you send us a link.

Thanks for the update.

rnigma, it is my belief that rather than being named for Gable and Taylor, Clark Kent was named for Kent Allard and Clark Savage, Jr. Not sure where I read it.

It must have been a bitter disappointment that Funnyman didn't do better. We can sit here 65 years later and analyze it, but besides the character, perhaps it had something to do with the glut of comic books in 1948. It was a busy year, and many new comics had trouble competing for room on the newsstands. Proven sellers like Superman and Batman would naturally get the space.

I assume that Funnyman was a non-traditional superhero because Siegel and Shuster may have been advised to stay as far away from another Superman as possible. They had sued DC over Superboy, they lost their jobs and their character, and the corporate powers at DC would not have hesitated to sue the baggy pants off Funnyman had he resembled Superman in the slightest.

Some fans have claimed that Siegel reviewed GLADIATOR, but it's almost impossible to check that statement, as the Siegel fanzine is nearly non-existent. One authority asserted that a private collector was rumored to own a copy, but there's nothing easily available.