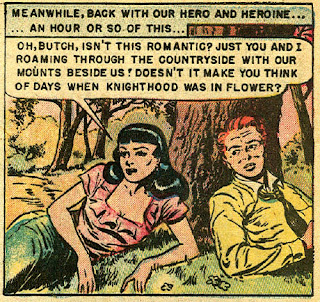 
Tony Gay? Butch Dykeman? Say, is somebody kidding with these names? I don't know for sure, but there they are, from this early 1950s story from a comic book called Popular Teenagers. Did those names have the same meanings as we might give them 55 years or so after the comic was published? That I also don't know…although I'm guessing the scriptwriter might have hung out with a hip crowd who used those words to describe a certain group of people years before the words themselves passed into popular usage.

We'll never know because the scriptwriter is unknown. The editor, L. B. Cole, and the artist, Norman Nodel, are all dead. With no way to prove it I think the names might have been a way of playing with the reader.

Toni Gay, in looks--the Bettie Page hairstyle gives it away--and name, seems to be related to an earlier L. B. Cole, creation, Toni Gayle, who appeared in a crime comic called Guns Against Gangsters. A Toni Gayle story appeared in Pappy's #22.

Norman Nodel (real name Nochem Yeshaya) was a very fine illustrator who worked for publisher/editor L. B. Cole for years on various projects, including comics, magazines, and is probably best known for his work in Classics Illustrated. Cole had very high regard for Nodel, and had this to say about him in an article by E. B. Boatner in The Comic Book Price Guide #11, 1980: "Norman Nodel was another extremely talented and much under-publicized illustrator who worked with me at Star [Comics] in 1951. He also illustrated for me at Classics and Dell and on World Rod and Gun [Magazine]. He had an opera quality voice and the God-given hands for illustrating--one of the nicest people you'll ever meet."

Cole was a canny publisher who used reprints and recycled material. The source for this Toni Gay story is Popular Teenagers #6, published under the Accepted Publications banner. 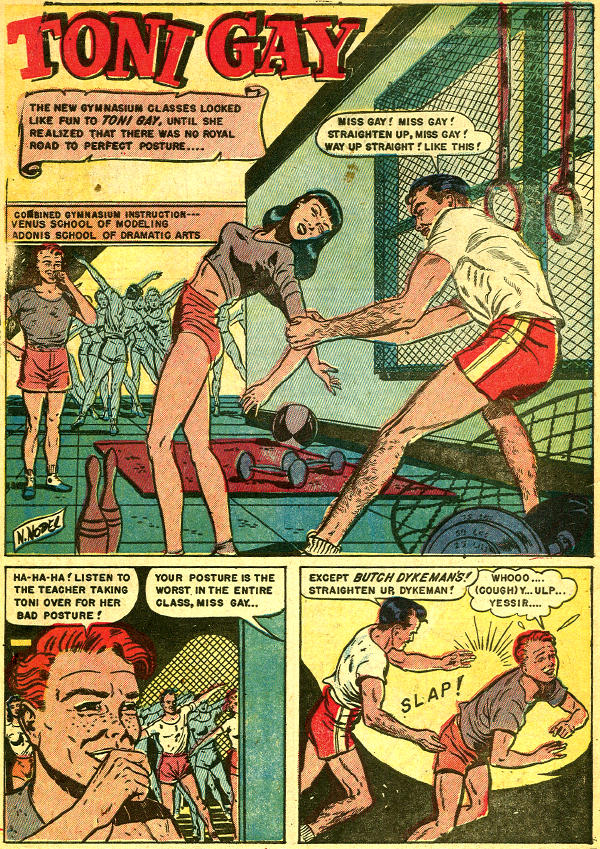 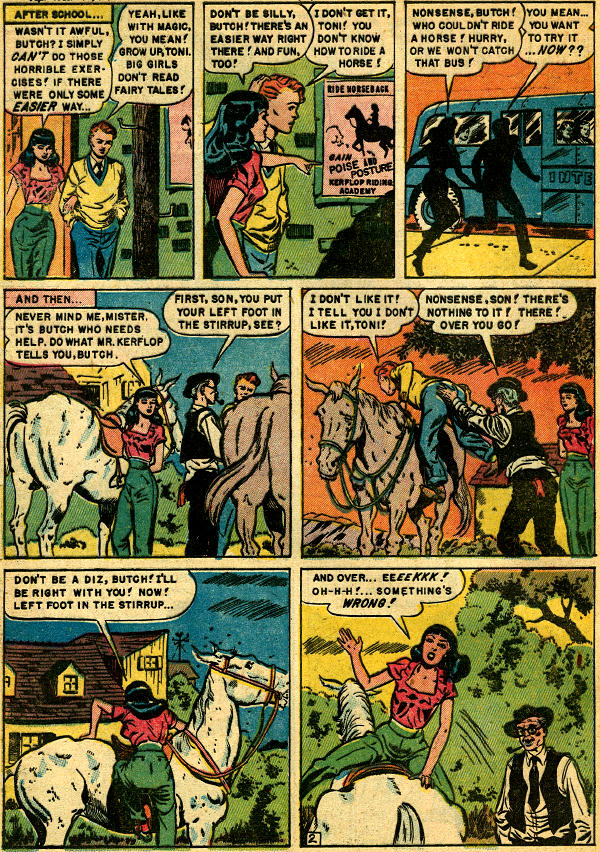 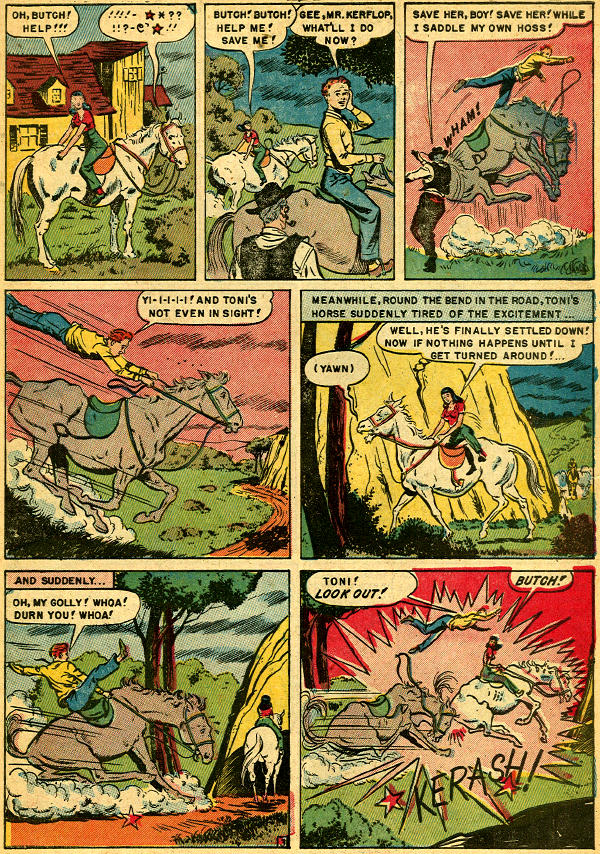 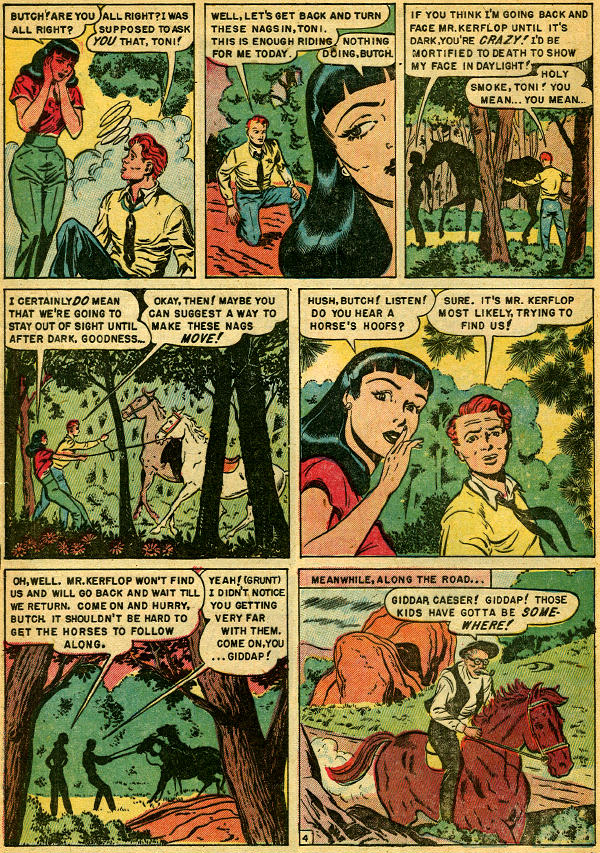 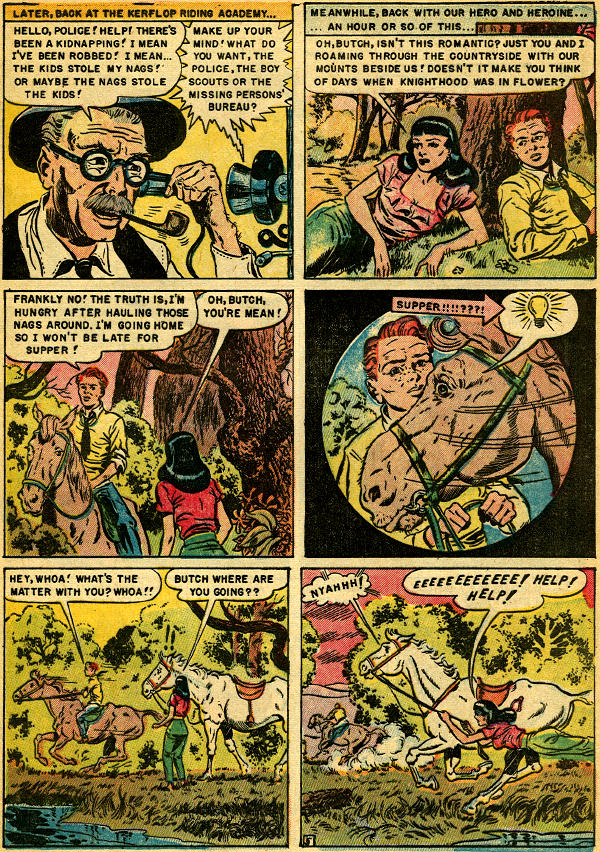 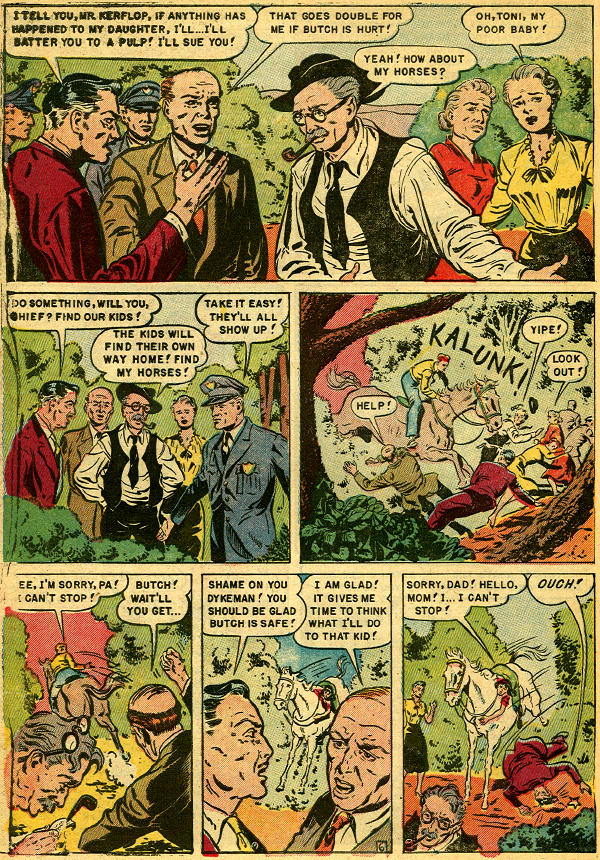 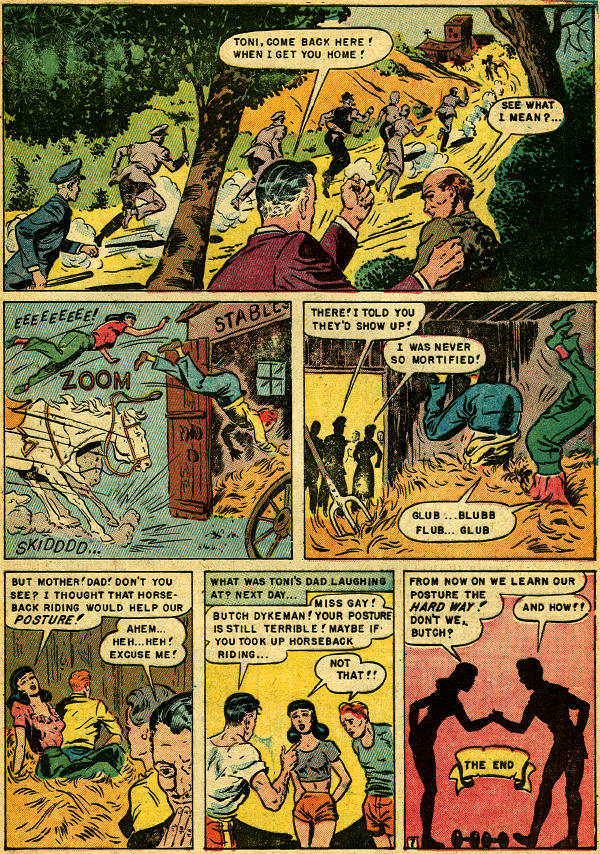 Yes, these words, (gay, butch, dyke) were in use then with precisely the meanings we give them today.

In fact, the Oxford English Dictionary gives the date for the first official use of gay as homosexual as 1951, the year Boatner gives for when he started working with Nodel at Star!

But in fact these words all go much further back in time: gay, (as gey, meaning pretty-boy/catamite), for instance, goes way, way back in time.

But then look at the story, Toni,: "Never mind [helping] me, [the girl] mister. It's Butch [the boy] who needs help", a complete reversal of traditional roles.

Then this panel immediately followed by one with Kerflop[!] bending Butch over [his horse] with hands firmly pressed against the boy's buttocks!

Earlier on, the moustachioed teacher in mid whallop of what can easily be 'misconstrued' as Butch's arse: "Straighten up, Dykeman!"

The reversal of normality reprieved by Toni mounting her horse back to front.

When Toni asks Butch if he's alright, he responds, "I was supposed to ask YOU that, Toni!"

Toni insisting she won't show her face until after dark, and Kerflop's horse being called Caeser, the notorious 'pansexual' Roman Emperor.

And never mind Toni's Betty Page hairdo, where I come from, (Liverpool, UK), the term "a bit ginger", used in reference to a bloke, has since before WW1, implied campiness, "limpwristedness", ['kerfloppiness'!], and Butch is as ginger as they come!

Even Boatner's reference to Nodel's having "an opera quality voice" and "God-given hands [for illustrating]" seems somewhat allusive.

O, by the way, I only discovered your blog the other day - quite by accident - and I've been having the time of my life reading all the horror comics I used to love as a kid since the early '70s, so thank you very much for putting this blog out there!