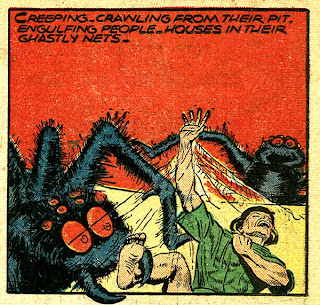 
Scared of spiders? Afraid when one of the little critters is crawling on your leg and you look down and are suddenly seized by blind panic? If you're that afraid of a tiny arachnid, what would you do if the spider was as big as your dog, or an elephant?

Well, you'd probably react like the people in these stories. Not very well!

First up is a Gale Allen story from Planet Comics. This 1946 strip is full of the pin-up panels that Fiction House was famous for. They were definitely going for the military PX, and teenage boy market. I don't know who the artist is.

Even discounting the giant spiders the story itself is ludicrous, but that just makes it more fun. How many rocket pilots, like Gale, also fill in on the switchboard?* It'd take too much space to have another character, an actual switchboard operator, call to Gale to tell her of a distress signal about giant spiders. The writer just made Gale the operator. Simple! You can't think too much about these types of comic books, you just enjoy them for their dopey plots. I also enjoy the attempts to make the story more "science-fictiony" with the use of words like "atmos-minutes" and a unit of measurement like "atres." Say what? Atres? Sizzlin' rockets!

The second story is a Fantomah story from Jungle Comics, drawn by the legendary Fletcher Hanks using a pseudonym, "Barclay Flagg." There is a book coming out soon from Fantagraphics on Hanks, and I can hardly wait. This Fantomah strip will be a good teaser to get us all ready.**

There is a hallucinogenic quality to all of Hanks work. Maybe it was the fact that he was alcoholic, but it could also be that he could draw, kind of, but just not what people expect of comic book art. He traced. Panels of the villain, Org, especially in the first couple of pages, look to have been traced and flipped, then re-traced. That's true for the giant spiders, too. His composition is also strange. Look at the two panels on page 1 where Org and Fantomah are eyeballing each other across the gutter between panels. I suspect that Fletcher Hanks was inspired by the art of Basil Wolverton, but like all Wolverton admirers didn't quite have the talent to pull it off in his own work.

I downloaded the Fantomah story from the Internet a few years ago and I don't know who to thank for doing the scanning.

Read these stories, arachnophobes, and just be glad that little brown spider crawling on your arm isn't bigger. 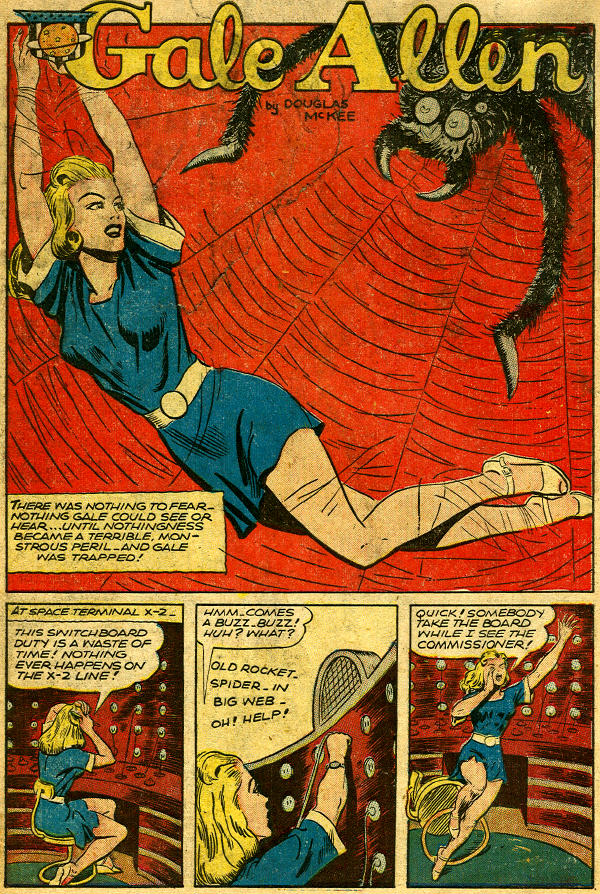 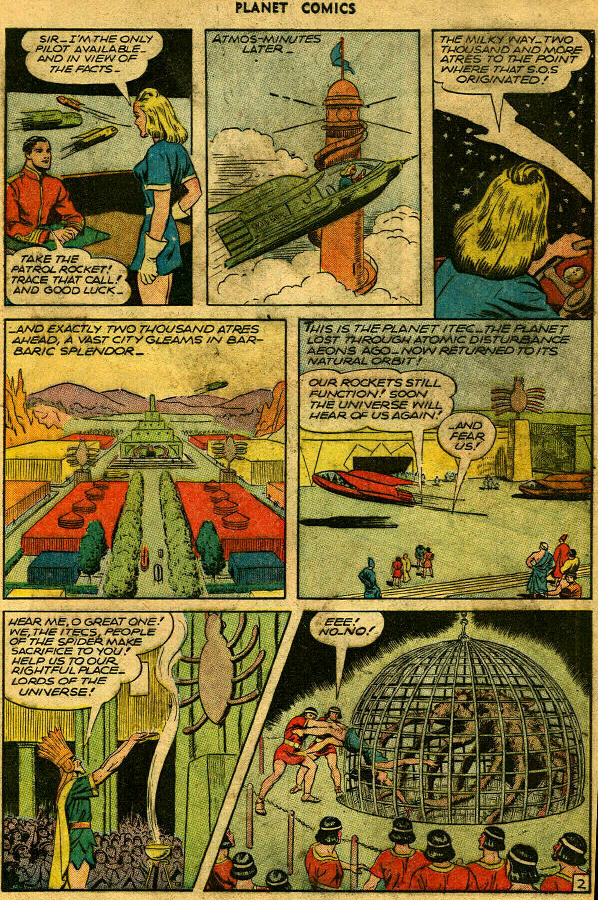 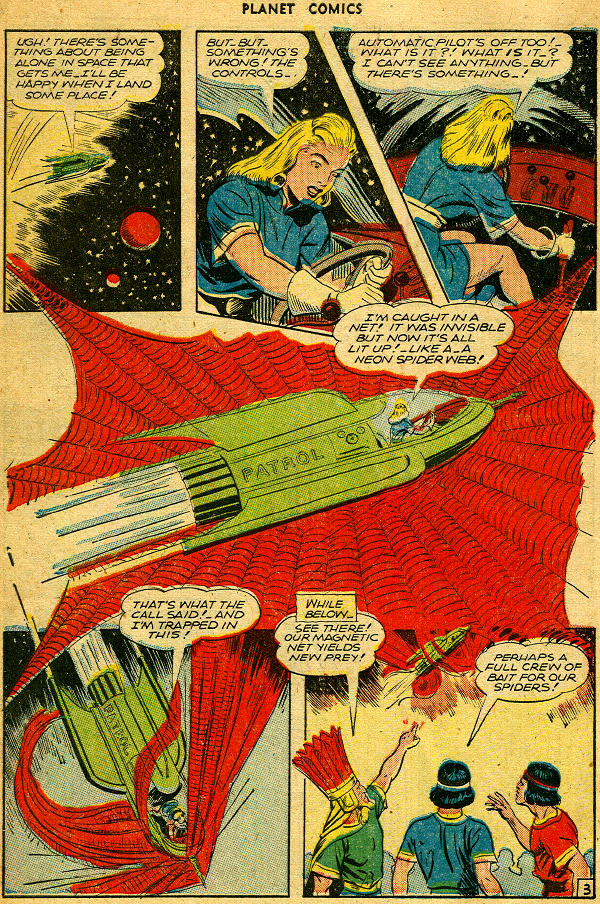 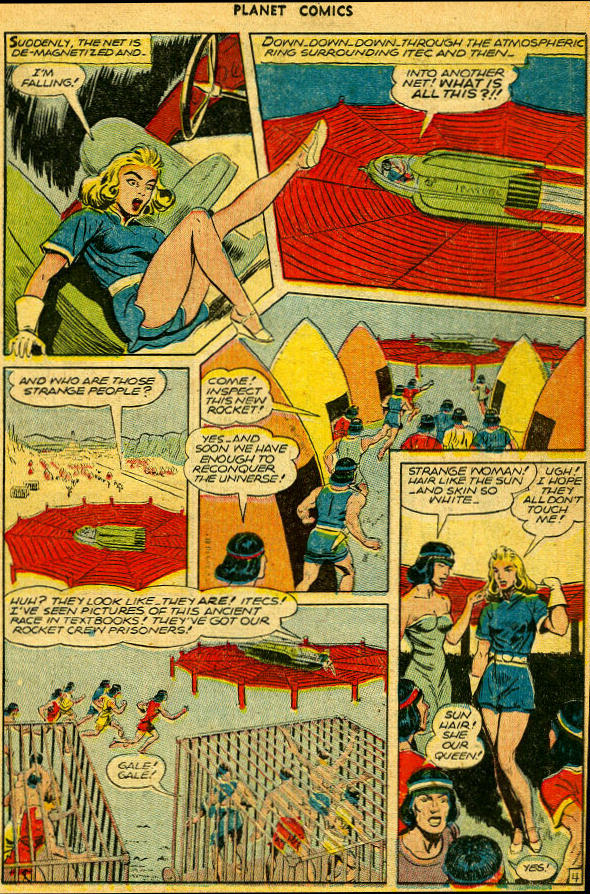 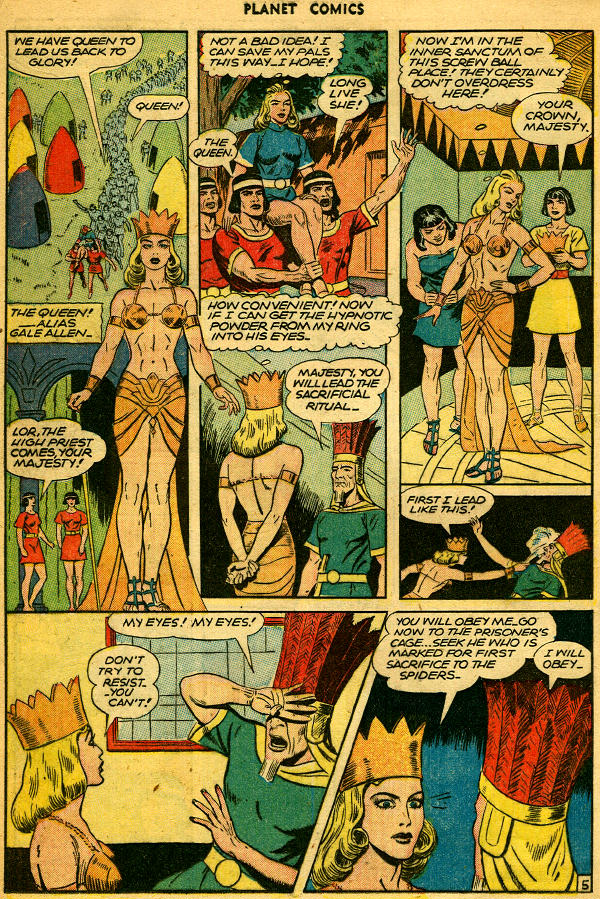 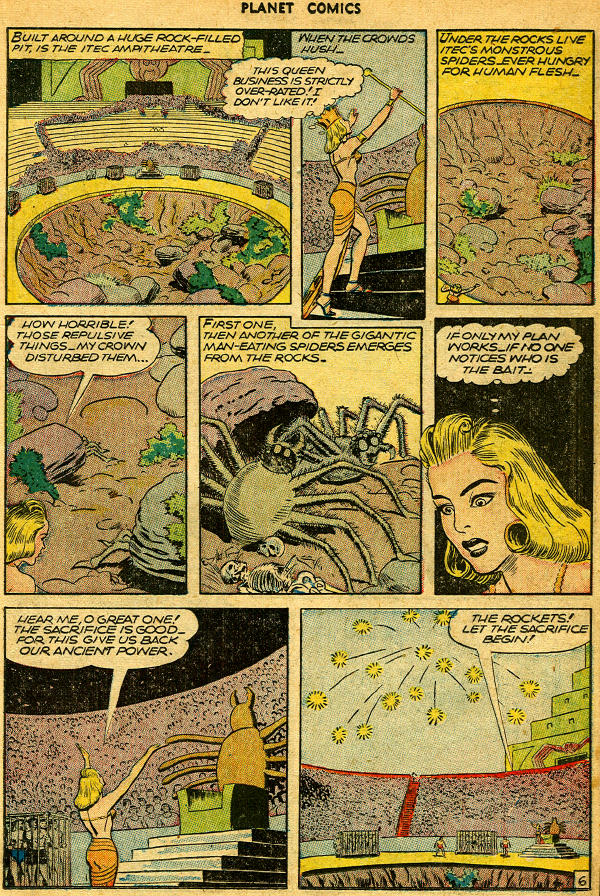 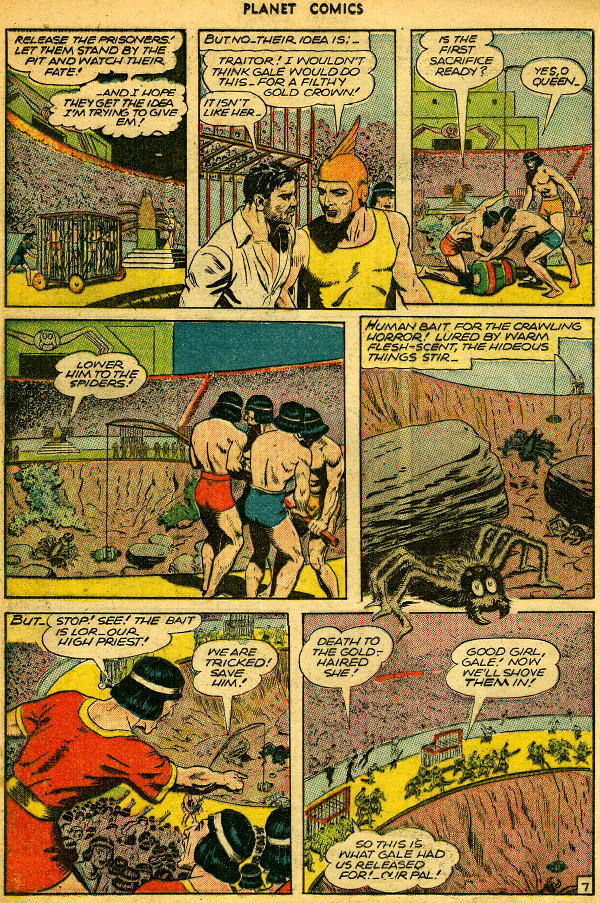 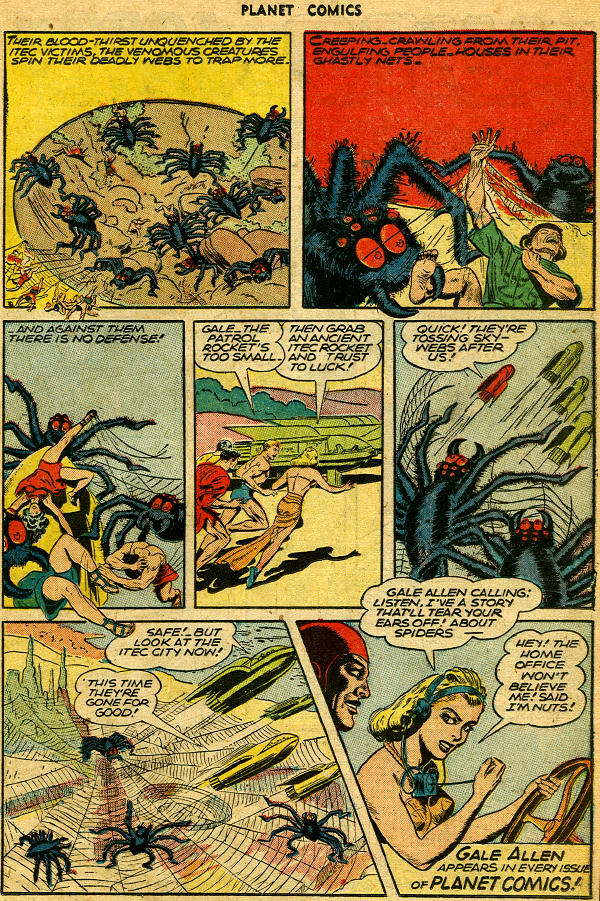 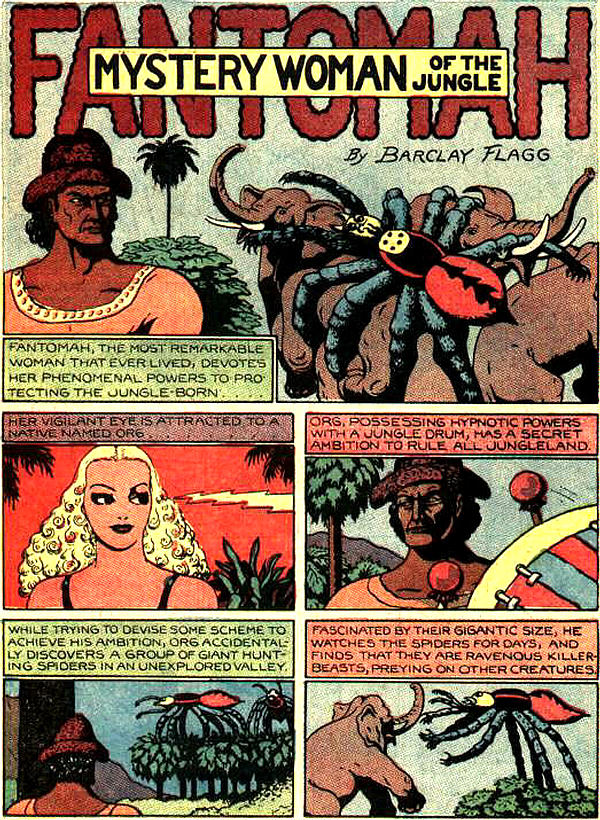 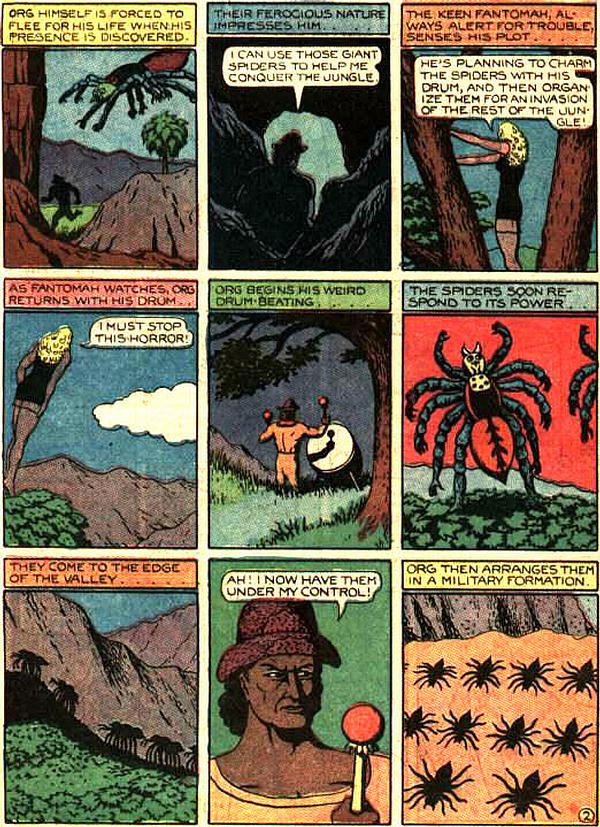 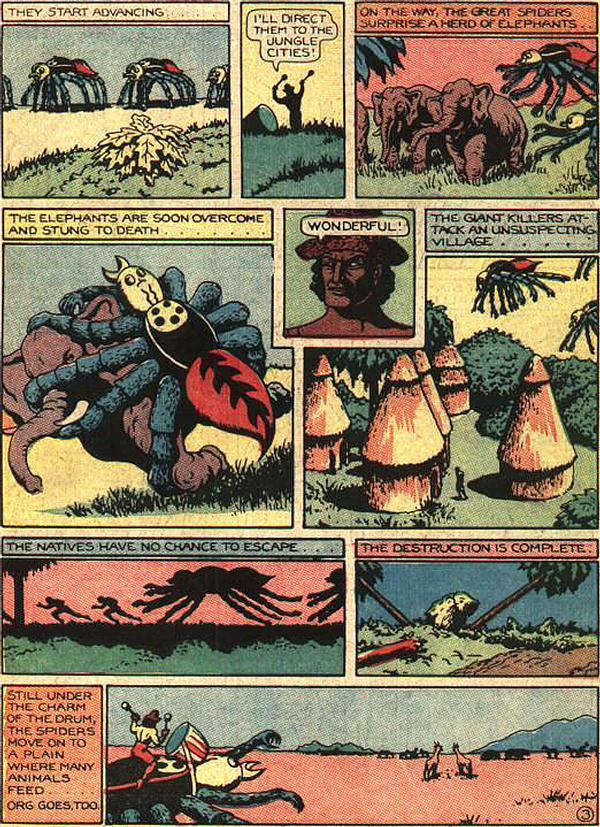 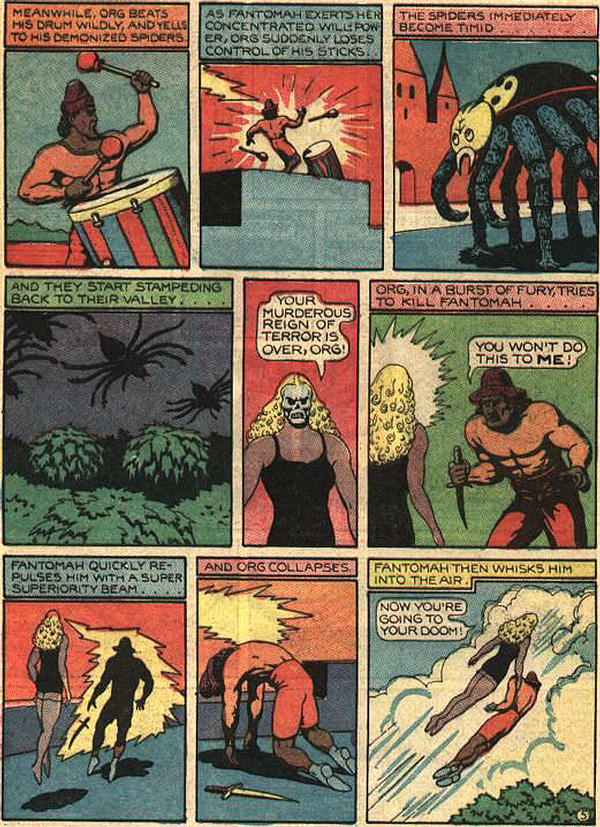 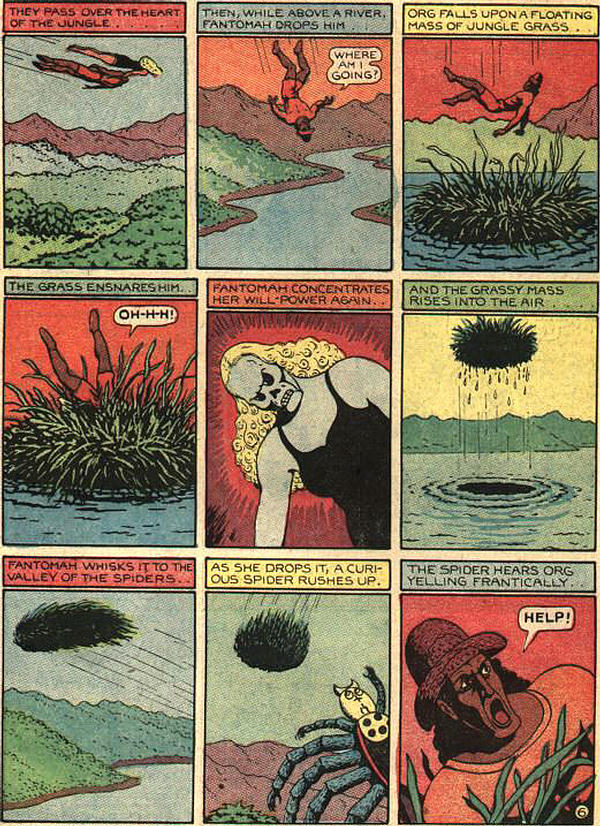 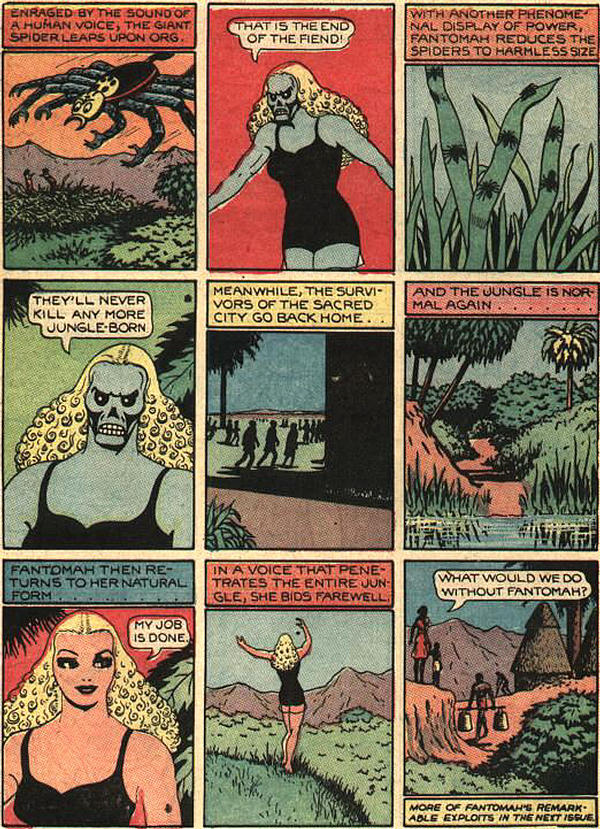 *I also enjoy seeing the future from the vantage point of the past. Instead of using some sort of device like telepathy or wireless communication, the writer just transferred some 1946 technology to the future.