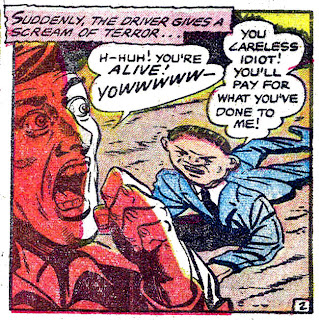 Since I'm writing this on Thanksgiving Day, 2006, it seems appropriate that I inaugurate a new series I'll be running occasionally: The Comic Book Turkey Awards. Rules are strictly arbitrary, judgment is all mine and will be strictly subjective.

The award will be given to the story I think best exemplifies comic book stupidity at its worst. Just as turkeys are reputed to stand looking up at rain until they drown, so do these stories exhibit similar lack of intelligence. First up is a story I mentioned in a Frankenstein Friday entry a couple of weeks ago, "The Flat Man," from Journey Into Fear #19, May 1954.

Most comic book horror stories are by default pretty dumb because the plots depend on wild occurrences that can't happen in real life. Still, with most horror stories we suspend disbelief and just accept the premise or the plot and ride it out until the end, enjoying it for what it is, dumb or not. "The Flat Man" seems to fail on the suspension of disbelief angle. I can suspend disbelief when it comes to rotting corpses rising from the grave, vampires, werewolves, or people making pacts with the devil, but I just can't accept a guy run over by a steamroller, mashed flat, and still living.

It's all a joke, really, because the story ends where it begins, under a steamroller. The artwork was done by the Iger shop for the publisher, Superior, which was a Canadian company. In an industry full of poorly-printed products Superior was definitely inferior to even its poorly-printed competition. I've seen quite a few Superior comics and none of them were printed well. They were sleazy publishers, going for the fast buck with a really crummy product. That's one of the reasons I love them so much!

On this Thanksgiving Day, "The Flat Man" earns 3 ½ turkeys out of a possible 4.

[Note: I have re-scanned artwork, slightly edited and replaced the original posting with this post in August 2012.] 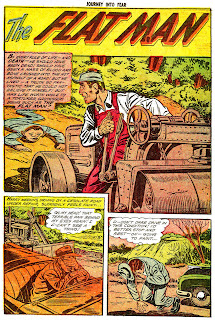 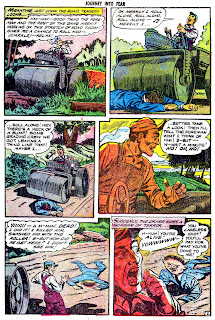 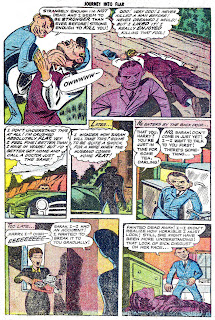 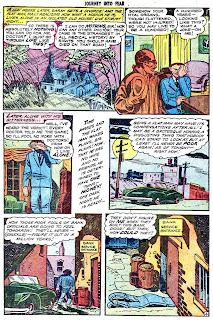 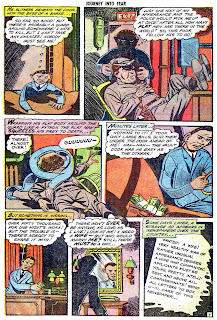 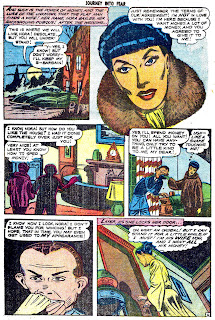 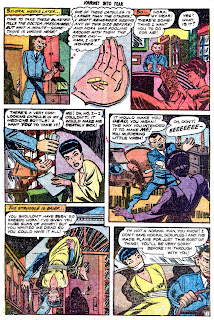 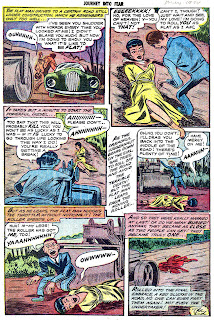