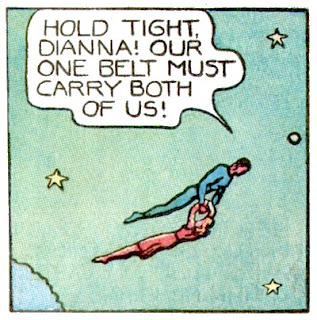 It is that day.  I put on my tuxedo and stand on the dais declaring the award to my readers. The Thanksgiving Turkey Award has been given every year since the inception of this blog, with the exception of one Thanksgiving (and perhaps someone out there gave thanks that I didn't show it that year). The Award, as I usually say at this time, is judged and given by me and is up to my choice alone. This year I have broken one tradition, which is to find a story (singular) to present, instead I am giving two stories. Both are by the inimitable Fletcher Hanks. Hanks got the Award last year, also, which makes him the first repeater in our yearly tradition.

With Hanks it is almost too easy, but stacked up against other comic book creators from the early years of the comic books, he was then an original, and still lives in our hearts as the man whose creations, artwork, dialogue, etc., are unique. I say “unique” although several comic book creators from the late '30s and early '40s had their own bizarre visions, but no one seemed to be as bizarre as Hanks, and that isn’t just my opinion, but the opinion of everyone who writes about Hanks.

I rarely give four turkeys as an award, but Hanks undoubtedly gets about as close as one can get to my vision of a perfect turkey, therefore today’s choice earns the rare four turkeys.

The episodes of “Space Smith” and “Stardust” by Hanks were published in the same issue of Fantastic Comics #3 (1939]. 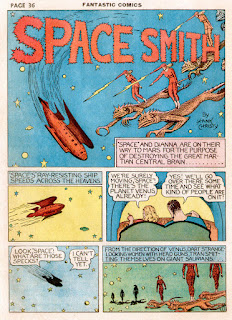 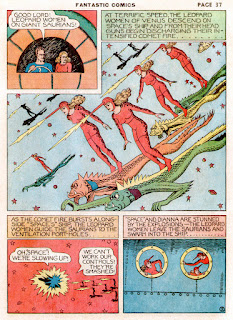 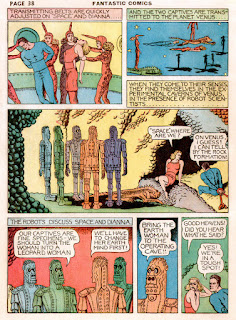 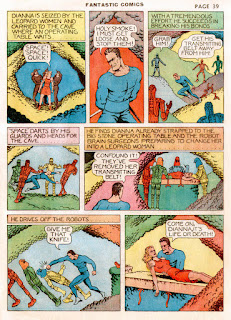 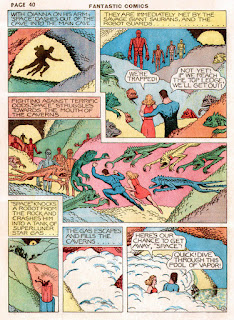 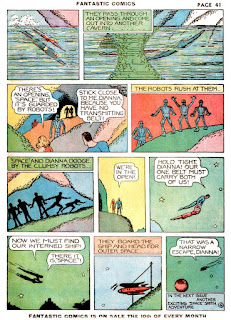 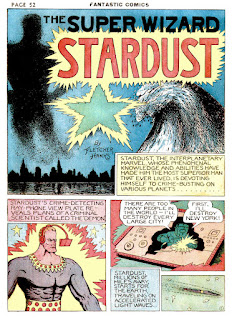 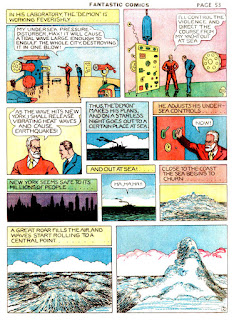 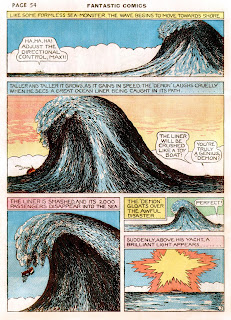 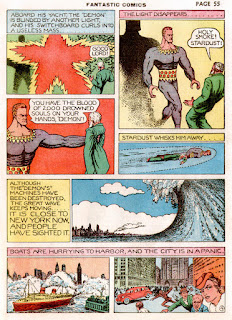 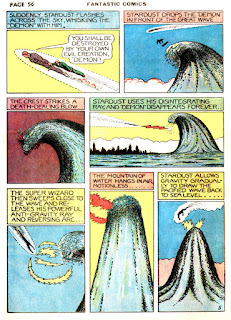 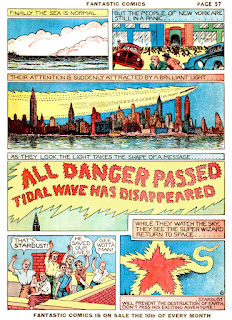 It's a pity that no one seems to have suggested to Hanks that “Space” Smith might be given a power to smith space. Imagine what Hanks might have done with that idea.

Apparently Fox thought that readers didn't merely tolerate Hanks's bizarre stories. After Hanks left, the job of illustrating Tabu was given to Lou Fine, but whoever did the writing produced a fair imitation of Hanks.

From the perspective of personal advancement, the “Demon” timed things badly. About thirty years later it became quite fashionable to insist that the world population needed to be reduced, and that view has not since gone out of fashion.

At some point, someone should write a story in which all the supervillains of Hanks's stories are restored or recreated by a new Hanksian supervillain. They can then work-out a joint plan to kill nearly everyone else with gorilla-spider hybrids or somesuch. They should probably set-aside some beautiful women, whom the villains will make ugly with an evil ray.

Bizarre is too kind a word.

The caption in the splash panel states that "Space" and Dianna are on their way to Mars. Two panels later Dianna says they're really moving and they're already in sight of Venus. Where had they started from...Mercury?...The Sun? If they started from Earth they must've taken a wrong turn at the Moon.

The story reads like the author was just making it up as he was illustrating it. Things just happen with no real explanation or motivation.

Good evening, Pappy (sorry for having been absent such a long time)! How are you?
Is Fletcher Hanks a "Turkey"? I understand and respect your choice, but, for my part, I can't help loving his bizarre visual rendition and his odd narration.
"Stardust" is a grim and deliberately unsympathetic character, possibly the most "nietzschean" superhero (if he indeed IS a superhero) I've ever seen.
Had Nazi Germany published Übermenschen Comicbücher, Hanks would have been the perfect artist to hire. Stardust just appears, with his bulky, static mass, and smashes his unfortunate opponent to pieces, staging a slaughter as gory as can be. Same can be said for his female counterpart, the ever-loving Fantomah.
Think about it Pappy... kids in 1939's Berlin reading the adventures of "Sternenstaub der Super Hexer" :D.
Anyway, "Space Smith" is a different matter. Not so grisly, and a forerunner for the psychedelic visions we will find in underground comics 30 years later. I believe Hanks and Wolverton were great anticipators, both in their own way.
By the way, I surmise an inspiration from Hokusai's "Great wave" in the Stardust story.
Happy Thanksgiving to all of you!

Oh my! Two super turkeys served without a side of stuffing or cranberries!
However, considering these are from Victor Fox's publications Fletcher probably received no payment for these opepi (Plural of opus I would suppose!)!

I'm surprised to find that opera is a plural of opus. Oh, and opuses, but I like the word opera as a plural as well.

My history with Fletcher Hanks' work goes back to when I was about 13-years-old and I read some old comic books with stories by Hanks. I don't think my young brain was ready for the Hanks viewpoint.

I see Stardust as a god figure, but an angry god, one with a strong view of justice. Or Hanks might have been a sadist. Hanks came off as bizarre.