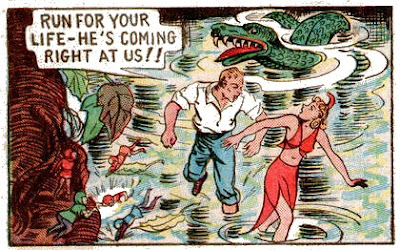 Flick Falcon is an unusual name for a science fiction hero. Flick appeared in Fox Features' Fantastic Comics. This was the the last issue he went by the moniker Flick; in the next issue he was re-named Flip. Someone at Fox probably realized the "flick problem" in comic books. Because of the all-capitals lettering in comics some publishers prohibited words with the letters “L” and “I” close together in a speech balloon. And also in the large display lettering, FLICK FALCON, in the splash panel. The fear was that a dirty-minded letterer, or the fast and and sloppy printing of comic books might make the L and I appear close together and create the forbidden “F-word.” We can imagine critics of the comics in that era seeing that word.

Flick/Flip was created by comic book journeyman, Don Rico, still in his and the comics' early days (Rico did comics at least through the mid-'50s). The online Marvel Database lists Rico as a triple achiever: writer, artist and inker. Grand Comics Database gives Rico the credit for this story. Some of the publishers Rico worked for are Marvel, Atlas, Timely (all published by Martin Goodman), Fox Comics, Lev Gleason, Fiction House, Ace Magazines, and Gilberton Publications (Classics Illustrated).

As for me, I am not very impressed by Flick, but I do like his sexy, pretty girlfriend. 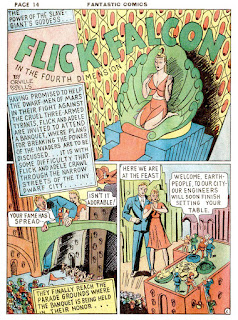 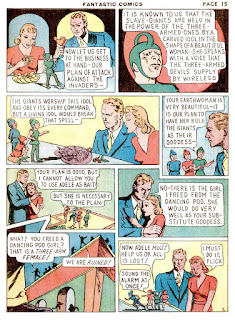 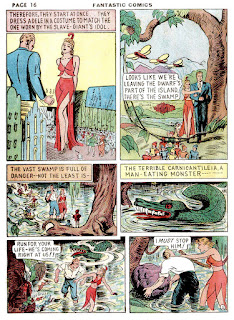 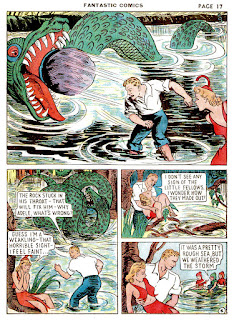 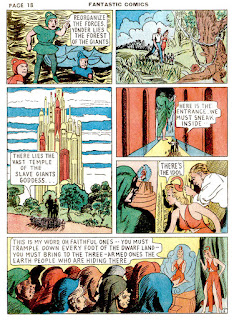 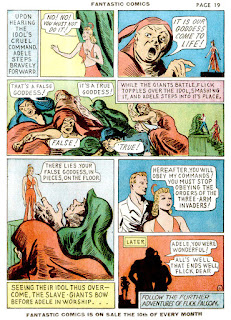 We can find Don Rico working in comics into the early mid-'60s. Given how bizarre some of his earliest work was, I think it notable that he was able to adapt as expectations changed.

The art here plainly contains some rough swipes of work by Alex Raymond. However, I'm always keen to see stories from the early golden age.

With one population much tinier than the protagonists and another much larger, I am put in mind of Gulliver's Travels. But Rico doesn't give us much story here. Further, I have to wonder whether Rico had ever lifted a large rock. Falcon could have choked that serpent with a stone more plausibly hurled.

In the earliest Millie the Model stories her boyfriend's name was Flicker. Later it was changed to Clicker to avoid the dreaded F L combination you mention.

Rico did a job or two for Marvel ca. 64 or 65, when Lee was trying out people to let's echo his style. This search ended with the hiring of Roy Thomas, maybe before the hiring of Denny O'Neil.
Now whether Rico had any other credits in the 60s I have no idea.

Daniel and Manqueman: if I saw Don Rico's work in the sixties then I didn't know what it meant. Rico had talent...he also wrote for Stan Lee. But in those days I didn't pay much attention to artists who were not among my favorites of the moment.

Occasionally in the '60s and into the '70s I saw some comic book work by artists who were fully along in the aging process who were taking a nostalgic shot at drawing comic books again. I also remember seeing some of the old guys at the San Diego Comicon in the mid-'80s, sitting at tables, perhaps doing a drawing for some fan who remembered him.