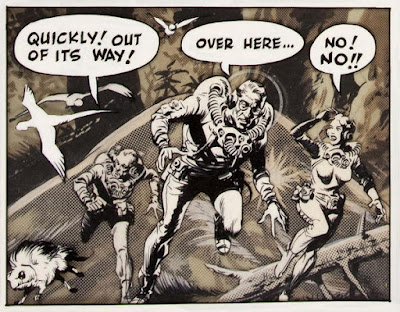 “The Spawn of Venus” by Wallace Wood is a famous unpublished EC Comics story. It was originally drawn by Al Feldstein (who also wrote it) in 1950 for Weird Science #6. A few years later the story was re-drawn by Wallace Wood for a 3-D comic that was never published. The market fell out from under the 3-D comics, and the artwork went on the shelf.

Feldstein’s art is very crude and stiff compared to Wood’s, like a layout for the latter version. I scanned it from the reprint of Weird Science #6, published in 1993. 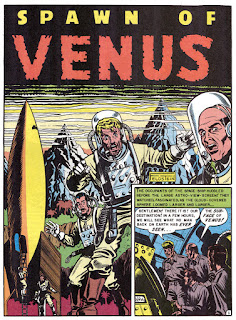 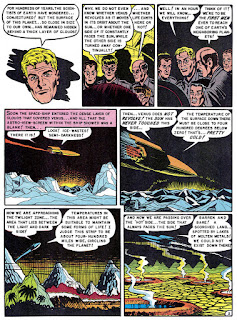 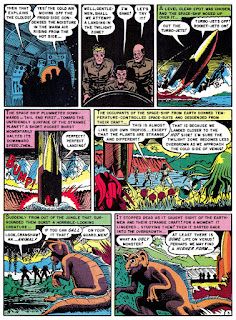 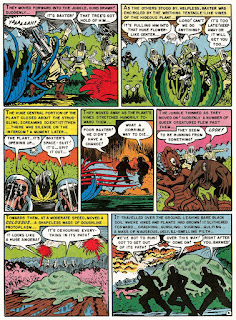 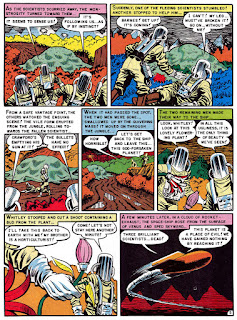 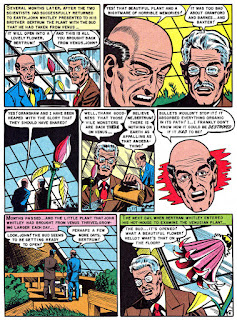 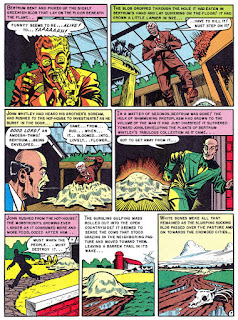 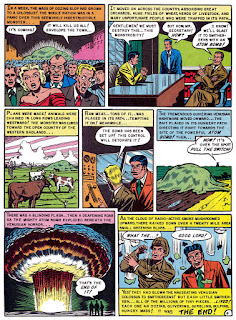 Wood’s art for the 3-D version was sold by Heritage Auctions in 2011 for $38,837.50. I am using the HA scans here, which show the layers of depth. I also love its patina after many years, adding to its charm. This job wasn’t easy for Wood, because of the amount of opaquing (white paint) on the back of each figure on each overlay to prevent show-through. 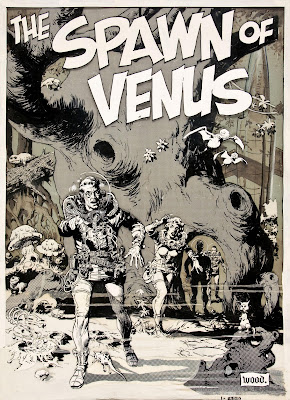 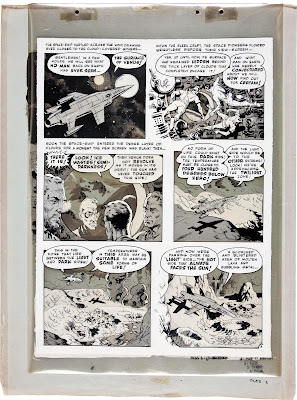 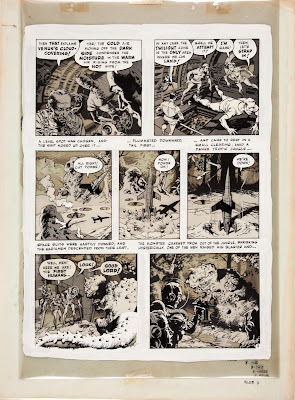 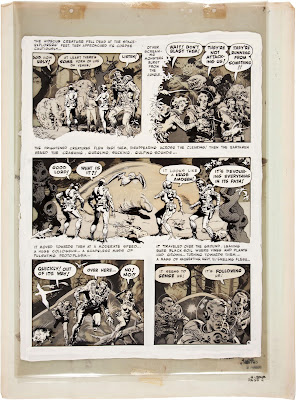 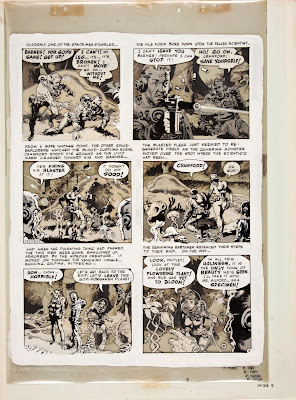 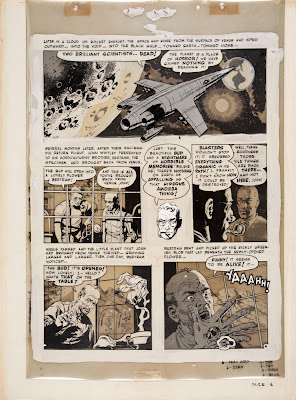 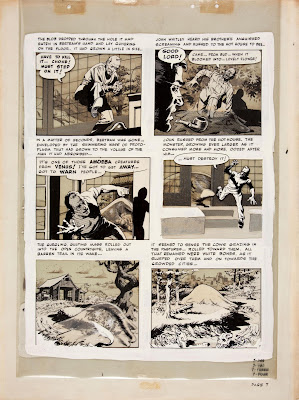 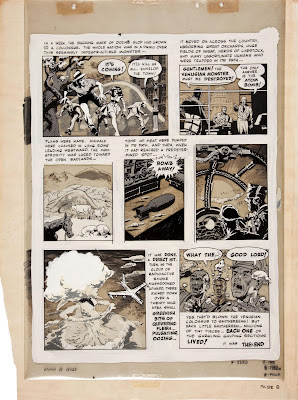 The story was first published was in 1969 in Wood’s own magazine, Witzend. I took my scans from the photocopies I made before I (sob, sniff...) sold it on eBay. I hated letting it go when I sold it, and regret it to this day. But that is how a lot of things I wish I still had went missing from my collection. At least I had the presence of mind to make copies. I am sure that whatever money I made in selling it went to something frivolous like groceries or a mortgage payment. 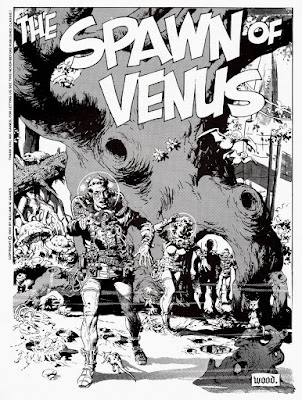 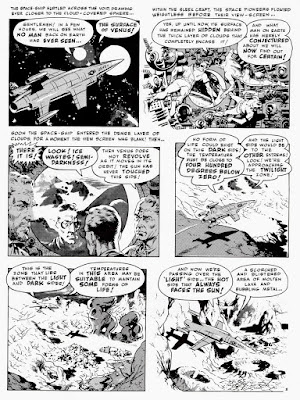 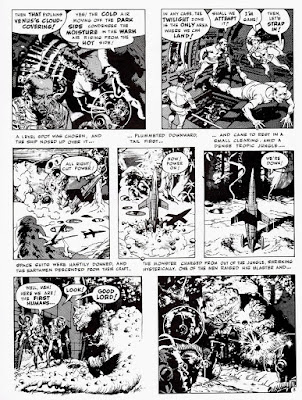 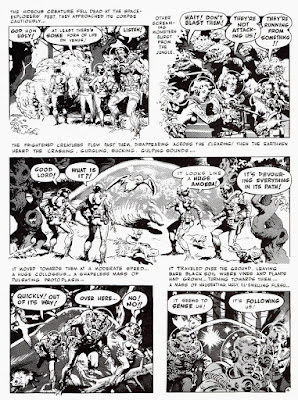 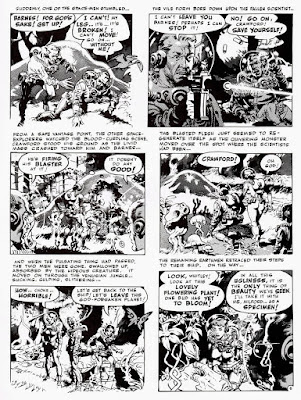 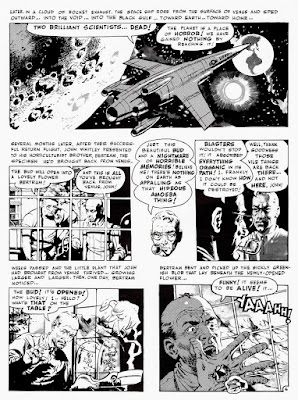 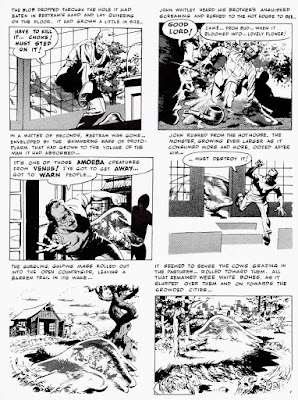 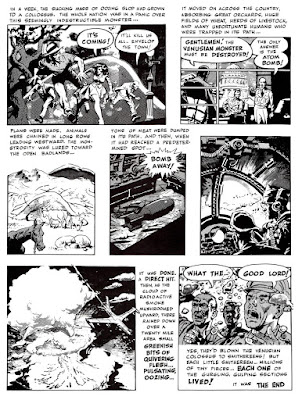 I'm reminded of how the Apollo astronauts were quarantined after they returned from the Moon.

Both in the original and in the reworking(s) of this story, the blob-thing is described as ill-smelling, even as the explorers are wearing their helmets. Now, granted that the description is in the narration, rather than in the dialogue; but it still seems incongruous. (If the helmets merely filtered the air, the filters should have removed foul-smelling gasses and particulates, because things smell bad to us exactly because we are evolved to avoid toxins.)

Feldstein's comic-book art pretty-much always looks primitive to be; sometimes that's okay. My guess is that, if he'd drawn a story for a 3-D comic book, the flatness would have seemed even more pronounced, with there simply being the illusion of two-dimensional shapes occupying two distinct planes.

Absolutely great work, Pappy. Showing all three versions together - outstanding. Three versions - ‘modern’ (or cheap), vs two really talented artists vision of the same story.
Thanks for this. I enjoy all of your work, love much of it, but this time, you’ve outdone yourself.
Again, thanks.

Obviously, Wood was incomparable. But I've always thought Feldstein was only a marginal artist, at best..even his "good girl" art is only notable for the exaggerated cleavage.

Well, you can always pick up the Complete Witzend. This particular story also shows up in IDW's Wally Wood Artist Edition at the mammoth size of the original art, scanned in full color (which picks up all the corrections and tinting), that really emphasizes how much work Wood put into every panel on his stories, not just this one. There are pages that look like miniature paintings, because he went out of his way to paste duo-tone paper onto already lettered EC art boards, grease pencil, zipatone and various other special effects and voodoo that were not really expected by editors to get the job done. I am just stunned by how much sheer labor he put himself through on some of this stuff. It's as if he was doing a full-size sculpture of the Sistine Chapel painting on every page.

Daniel, both you and Brad S bring up Feldstein’s art, which can appear stiff and crude compared to the artists who became the stable of EC Comics. Someone must have liked it in those earliest EC horror and s-f for EC comic books to become so popular and collectible. When I first saw the EC horror and s-f in the late '50s I saw Feldstein's art as distinctive, at least. As the looks of EC comics got more sophisticated I believe Feldstein was wise to turn to being an editor and writer, rather than illustrate his own material (even if time had permitted it).

Russ, I didn't have time to edit the post before returning from six days away from my desk, but I did find my copy of Witzend #6. So I had not sold it, apparently. My memory was probably tricked by the photocopies I made, for whatever reason, of "Spawn" in 1999 or 2000.

Isaac, awwww (blush), thank you for your comment. If you are happy with it, then the work I do on this blog is worth it.

I feel your pain Pappy, I sold my comic collection several years ago and it all went to bills and what not. Thanks for sharing your memories and collection with us all.

Pappy, the 8"x12" Artisan Edition with the same content is still on sale, so you might want to check local shops to browse a copy. (I expect a check from IDW for all the plugging I'm doing here.) While not as stupefying as the original art size, seeing these full color scans still is worth experiencing if you're a Wood fan.

So, these are basically comic book adaptations of the short stories "Parasite Planet" by Stanley G. Weinbaum and the "The Immeasurable Horror" by Clark Ashton Smith... I really love it :D